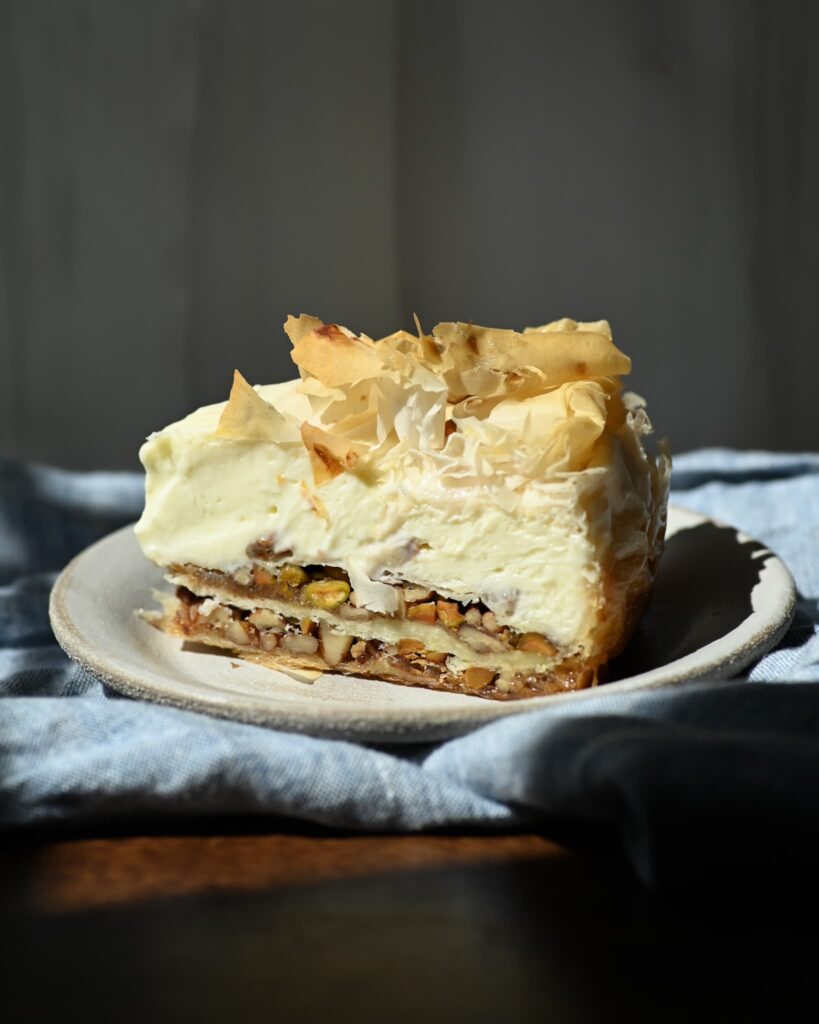 What is baklava cheesecake?

(And the real question you’re thinking: why should I ruin my day working with the dreaded phyllo for this?!)

The backstory for this is that when my FIL came to visit us after I had my first, I asked what to make him for his birthday which coincided with his stay. He told me his favorite two desserts were cheesecake and baklava.. And with a baby in tow I was not going to make both, so I combined them!. The pie was SUCH a hit, to him, my MIL and some friends and they’ve all been asking me to make it again ever since.

Basically it’s a cheesecake but it has a baklava crust. Or it’s baklava with cheesecake on top. The beauty of this dish is that it does justice to both desserts without compromising either, neither takes over and they pair together so very well. A little tang and tart in the cheesecake offsets the nutty sweetness in the crust; you’ll use the creamy filling to scoop up all the little flaky bits of the crust. It’s just the best really. 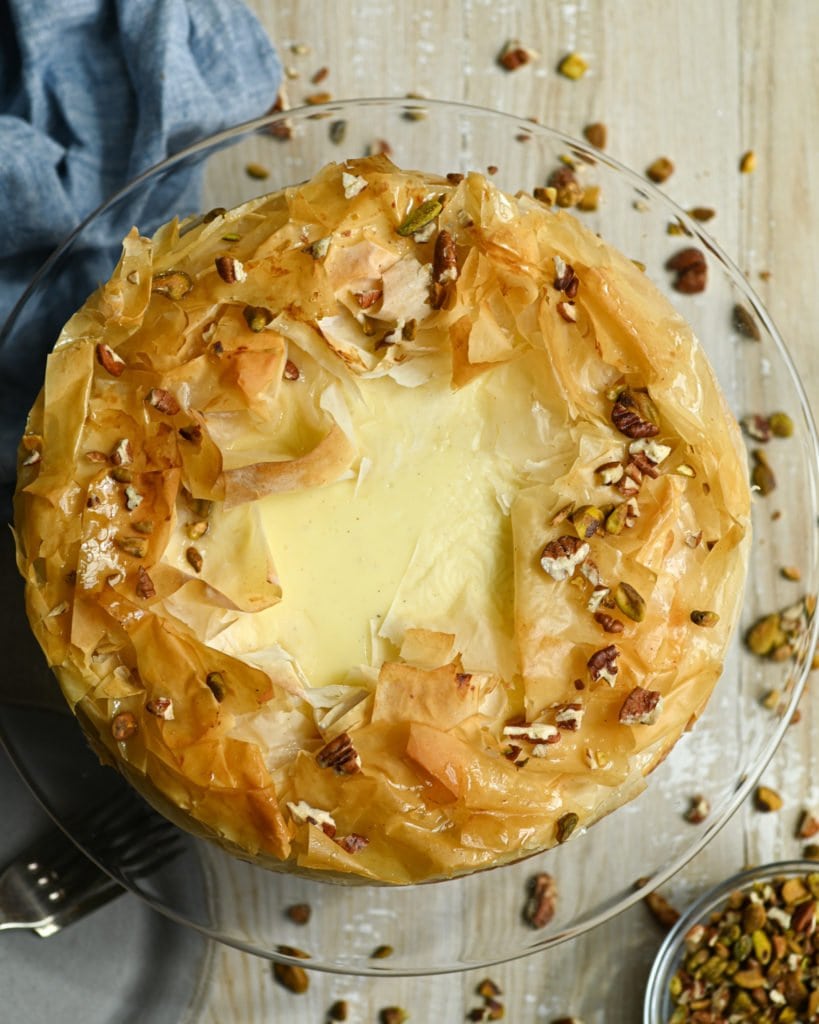 Phyllo: Sheets of phyllo, you’ll need 20. Usually sold and kept frozen, have yours thawed in the fridge for a few hours before you start working with it.

Ghee: This is similar to but not the same as clarified butter; it has a lot of the moisture removed and is a concentration of butterfats. If you can’t find it, you can use butter. I personally prefer ghee as you get the ‘butteryness’ without the milk solids that can brown too quickly in the oven.

Nuts: Walnuts and pistachios are traditional but pecans are also wonderful here. Make sure your nuts are toasted and crunchy before you use them (toast them yourself on a sheet pan at 350 for 5-10 minutes to wake them up. If they are raw, you might need up to 12 minutes).

Sour cream: Contributes to the creamy and tangy qualities in the filling. Room temp is best.

Lemon: I like just a little squeeze of lemon in my cheesecake to offset all the sugar.

Vanilla: Scrape a vanilla bean if you like, use vanilla extract or even vanilla paste.

Honey: Not absolutely necessary but makes a wonderful addition to the simple syrup; honey is traditional in the greek version of baklava. 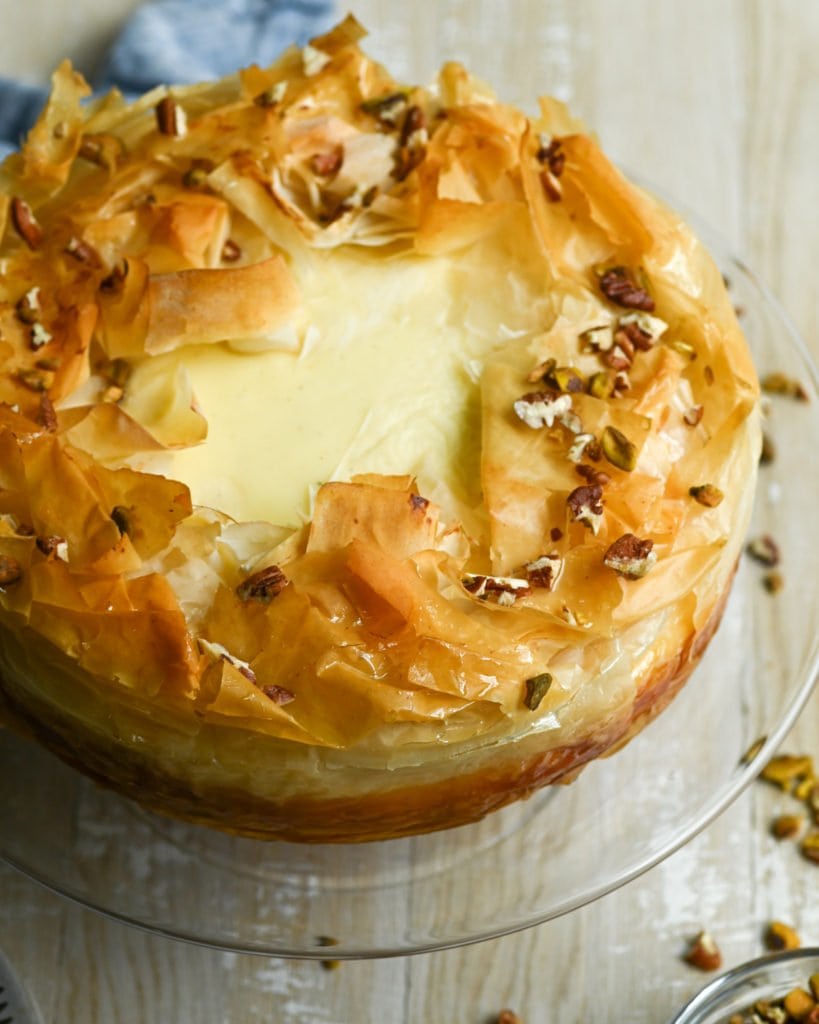 How to make a baklava crust for the baklava cheesecake

First you’ll make the filling: chopping the nuts and tossing them with sugar/cinnamon and a bit of salt if you like.

Now comes the layering: recipes usually suggest keeping the phyllo covered with a damp towel and you can do this if you like. I personally do not know how to dampen a towel lol, so I just work fast!

Each layer has to be buttered (or spread with ghee, my preference) and layered slightly clockwise so we cover the whole cake pan. It’s like drawing petals on a flower.

You’ll have 10 layers which form the bottom of the cheesecake, then half the nut mixture, another five layers and another half of nuts. And five layers on top.

Don’t worry so much about what the crust looks like on top. You’ll simply scrunch up the overhang and it will look rustic and cute once baked.

How to make a really creamy cheesecake

Layers and layers of crispy buttery phyllo and crunchy nuts contrast wonderfully with the creamiest cheesecake. The pie is doused in a simple syrup to hone in on that drippy sweet baklava goodness. 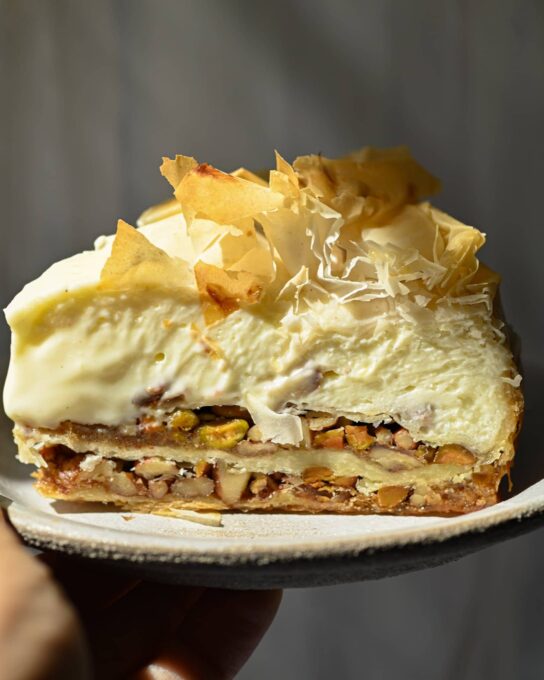 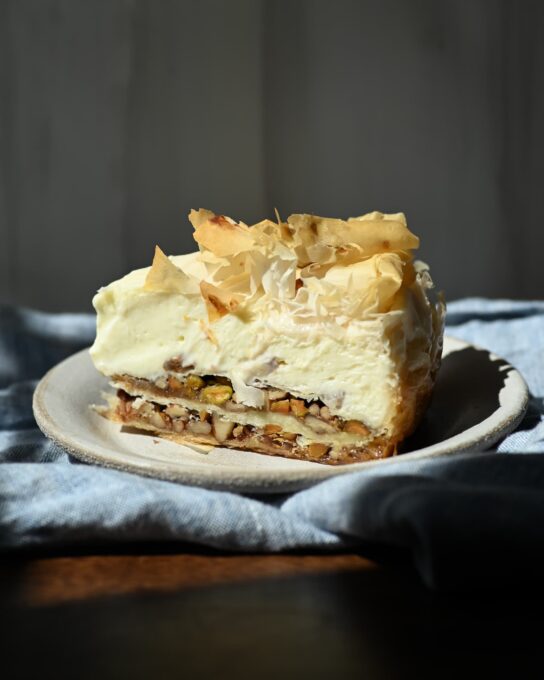