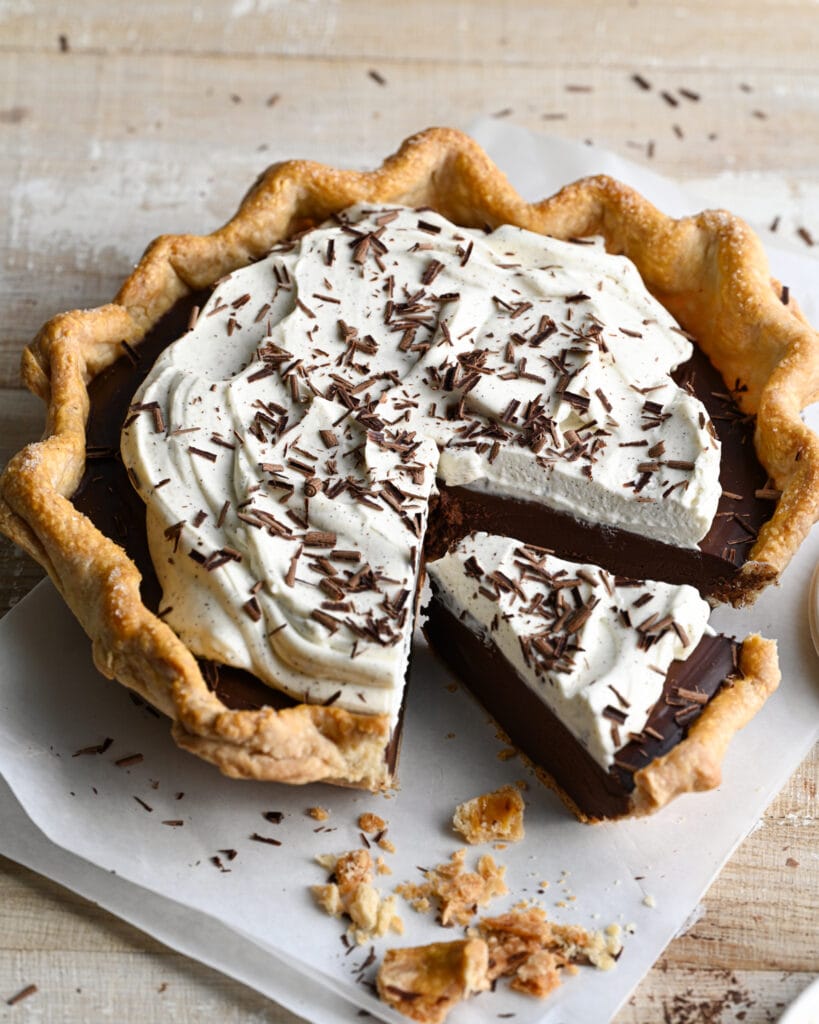 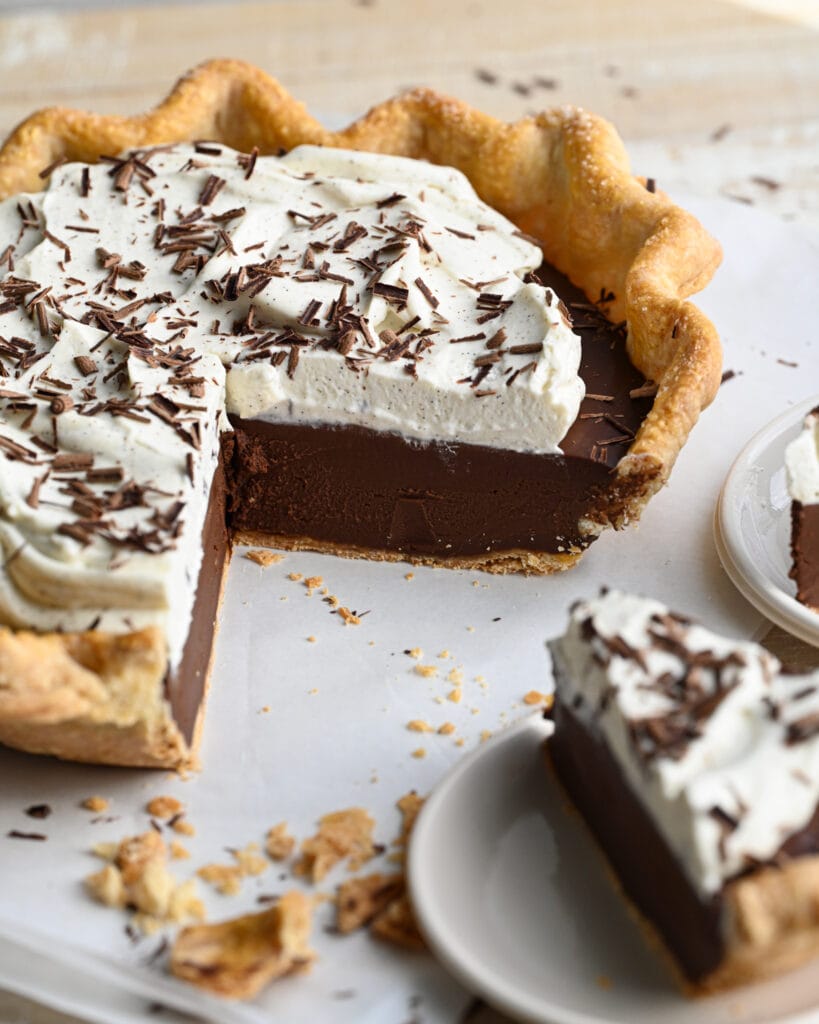 Inspired by this tiny no-bake chocolate custard recipe, but really absolutely wholly different. We share a similarity in parts of the method and parts of the equation but this deeply chocolatey monster of a chocolate cream pie is really my own mania.

Sometimes when I stumble upon a recipe I carefully look at the ingredients and method and ask, what could I do differently to make it even better? Often the first answer is, brown the butter – add that nutty taste that complicates any flavor profile by tenfold. But also, I dislike half-hearted attempts at chocolate so out goes the semi-sweet. To further deepen and complicate a flavor palate I’ll add something tart or tangy where I can.

So this pie is a little less creamy than your average chocolate cream pie, it’s got a thicker constitution, almost ganache-like. It’s also not at all plain chocolate, it’s got some nuttiness to it, a little tang and yet still dark and dreamy. 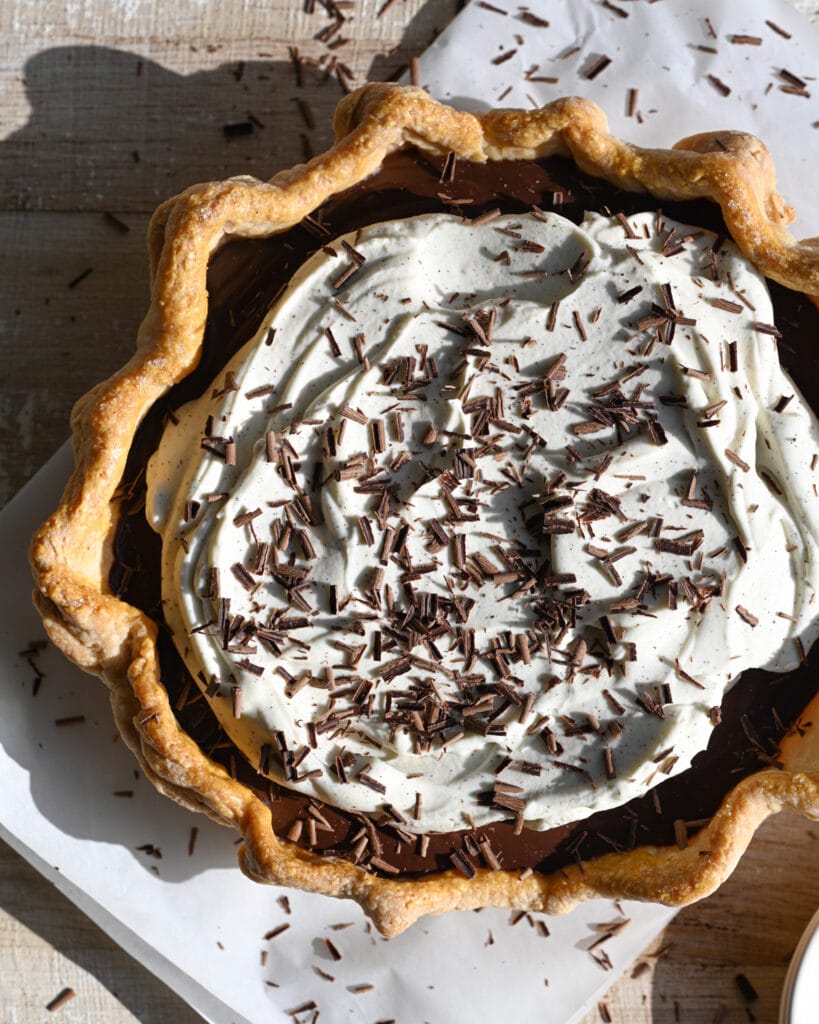 Pie Crust: you can use store bought or use my homemade pie crust recipe (you’ll only need half of that recipe).

Butter: Unsalted is best to control the salt level.

Milk: Whole milk or 2% at least. Anything less will render the custard thinner.

Sour Cream: Full fat. You could also use labneh here or a full fat greek yogurt (although the latter will give you a more tangy taste).

Chocolate: Dark or semi-sweet chocolate. If your cocoa solids are less than 55% you will have a slightly softer consistency and a more milk chocolate like taste.

Egg yolks: From large eggs. No substitutes. It’s ok if they are cold (eggs separate more easily when cold).

The chocolate custard looks bitty and/or separated. Did I do something wrong?

It’s possible you’ve overheated the eggs but if you’ve kept watch and it looked fine until you incorporated the chocolate, it’s likely that it looks this way because the chocolate melted quickly. Adding the sour cream and milk after will help it come back together. That said, it won’t be perfectly smooth due to the bits of brown butter (milk solids). 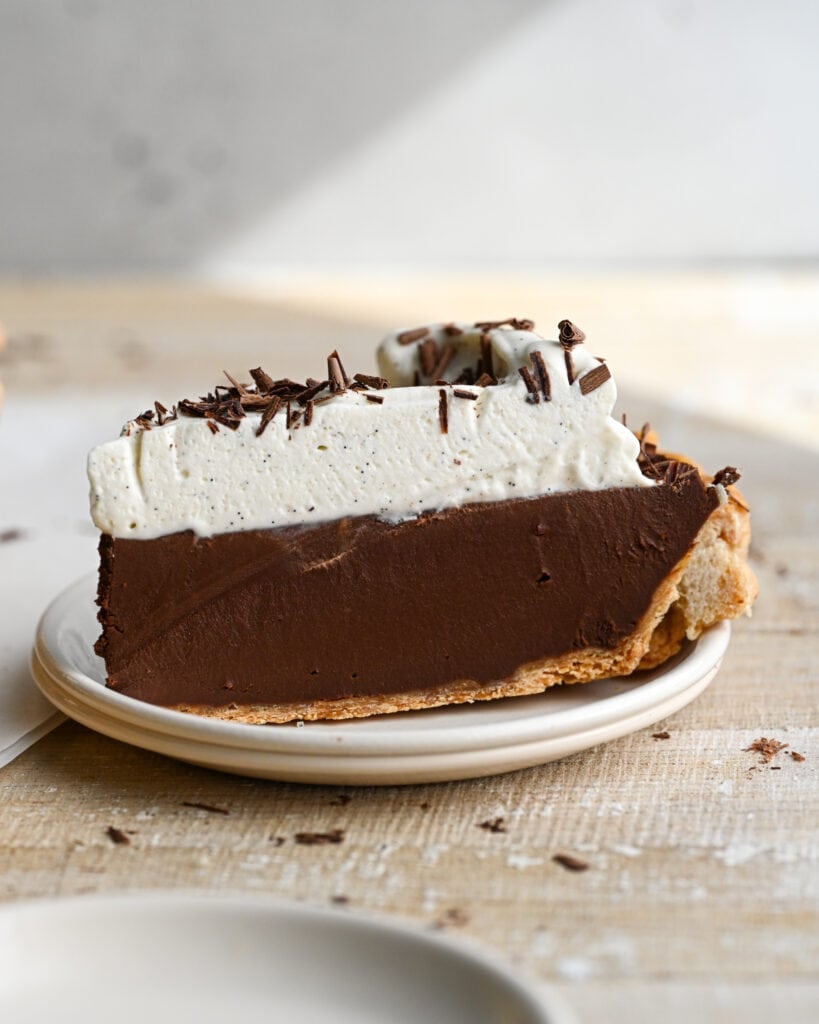 I’ve made this at least three times, two with a basic all butter pie crust and once with my cocoa pie crust. As much as I loved the triple chocolate situation, my favorite was when the filling was given more room to really stand out against the toppings and crust.

However, if you aren’t in the mood for a pie crust and a blind bake (it needs to be fully baked before the custard goes in) then you can opt for a cookie crust, with ground up oreos or graham crackers (2 cups cookie crumbs and ½ cup melted butter should be enough)  – I’d bake it for 10 minutes to firm it up before adding the filling.

Given that it is a cream pie it stands to reason this should be topped with whipped cream! You can do the basic vanilla bean I have below or a chocolate version, just add 2 tablespoons cocoa.

The little chocolate bits on top are shaved chocolate; I used a vegetable peeler on the side of a chocolate bar. Makes it pretty!

Ok sam, but why are we making the whipped cream in a food processor?

I’m SO glad you asked! When you “whip” the heavy cream with a whisk or hand mixer you incorporate a lot of air as it thickens. This is great, sometimes, but not ideal for pies or desserts that need to be made ahead of time and stored in the fridge.

Traditionally whipped cream has a tendency to separate and get watery as it deflates; for anything that’s make ahead you want it to be stabilized.

To make stabilized whipped cream, some people add gelatin or cornstarch. Truthfully you need neither if you use the food processor. It thickens without adding too much air and lasts days in the fridge without losing shape or getting goopy, seeping/weeping.

P.S. I started doing this after seeing Paula make hers with an immersion blender – you could try that if you don’t have a food processor.

But also, if you have neither, just use a whisk and make it right before serving.

How do I fix over-whipped cream?

Whether you’re using the food processor method or a beater/electric whisk, you may over-whip the cream. You’ll see it turn rough rather than smooth and well, you’re on the way to make butter.

The easiest way to fix it (assuming you haven’t actually made butter yet!) is to add more heavy cream and simply stir until it’s the right consistency. It should be at soft peaks; smooth but droopy. 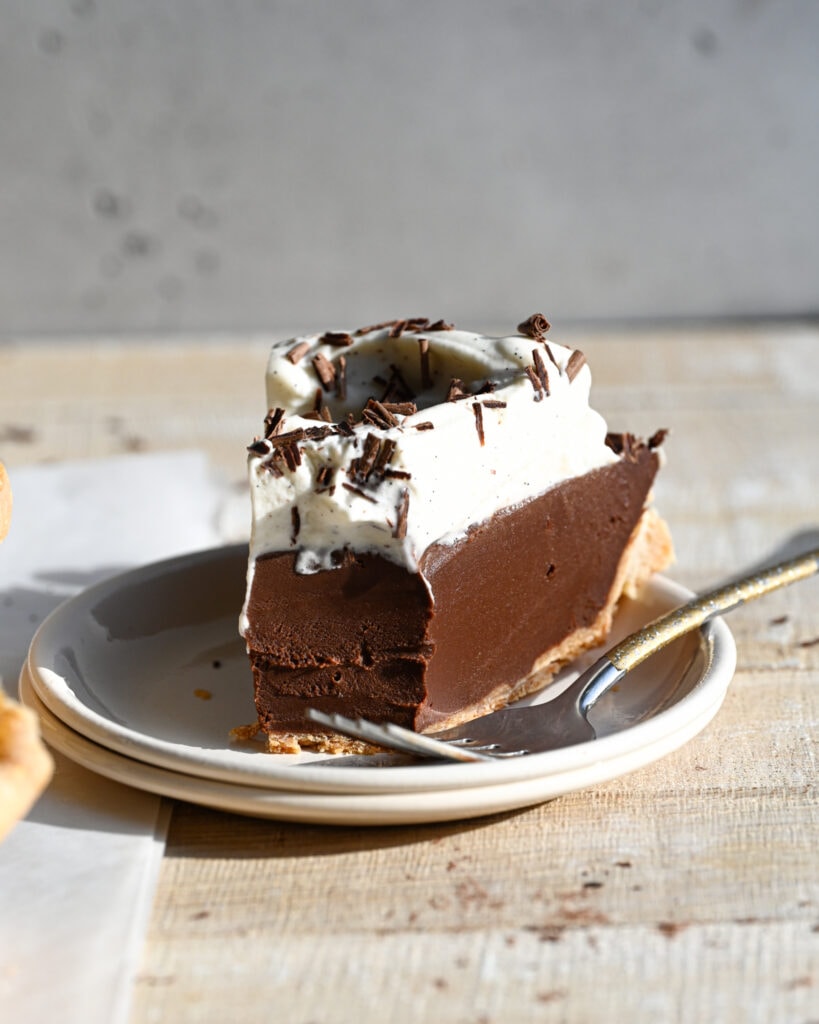 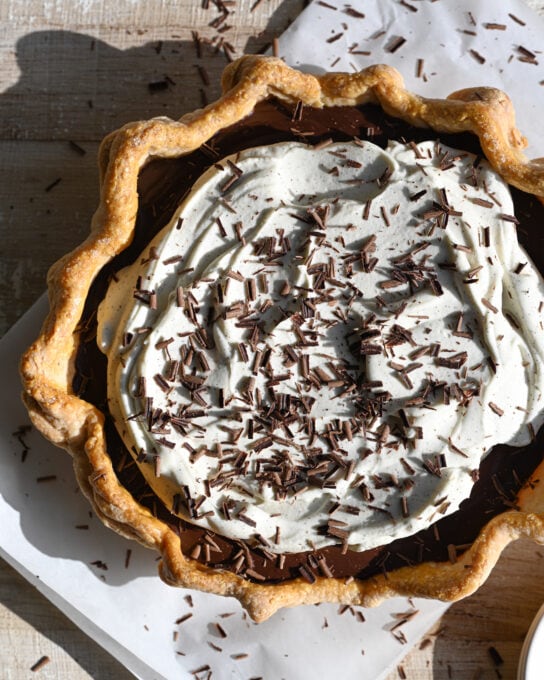 For the whipped cream 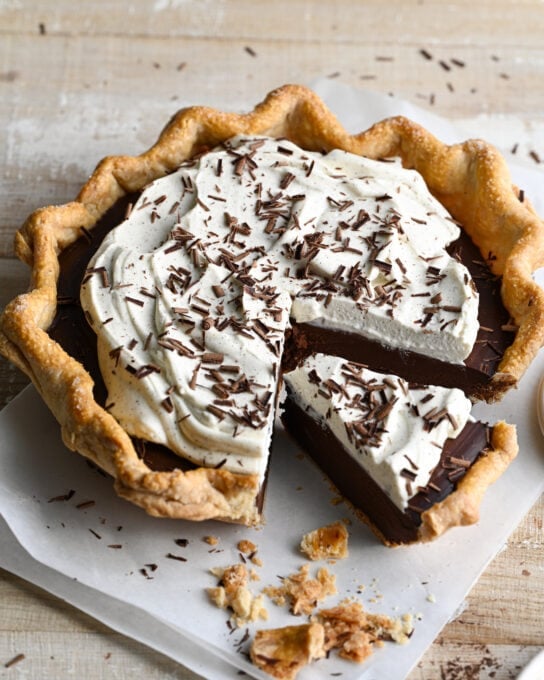