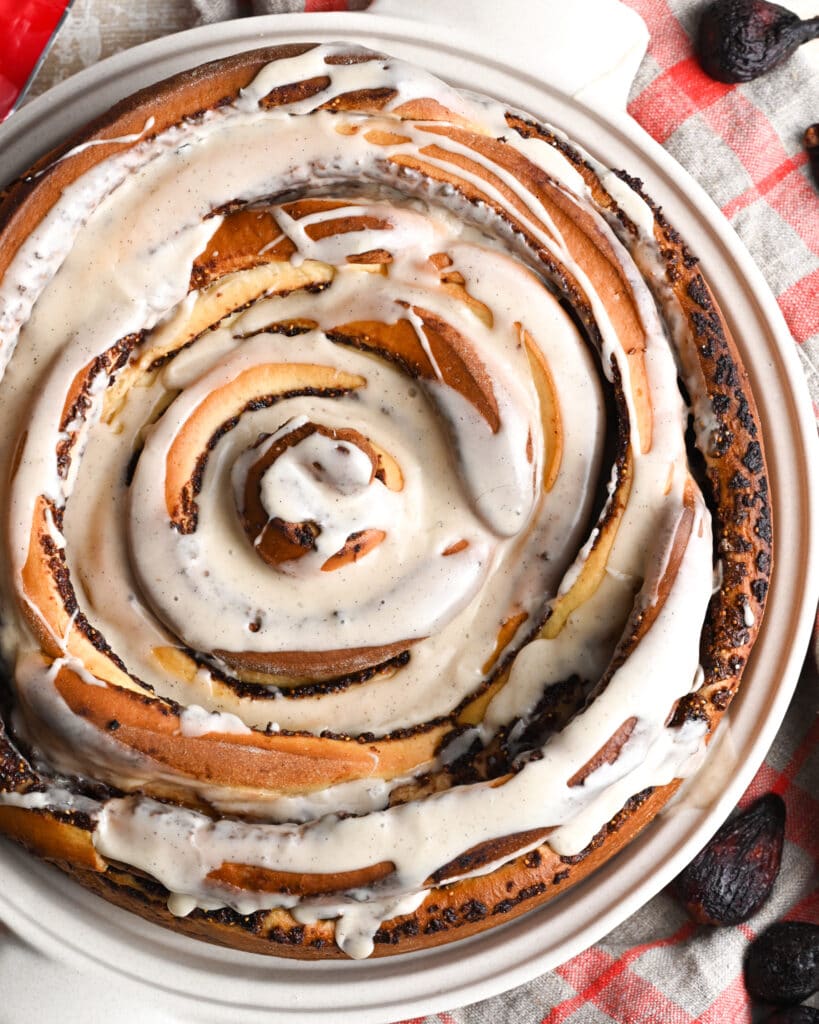 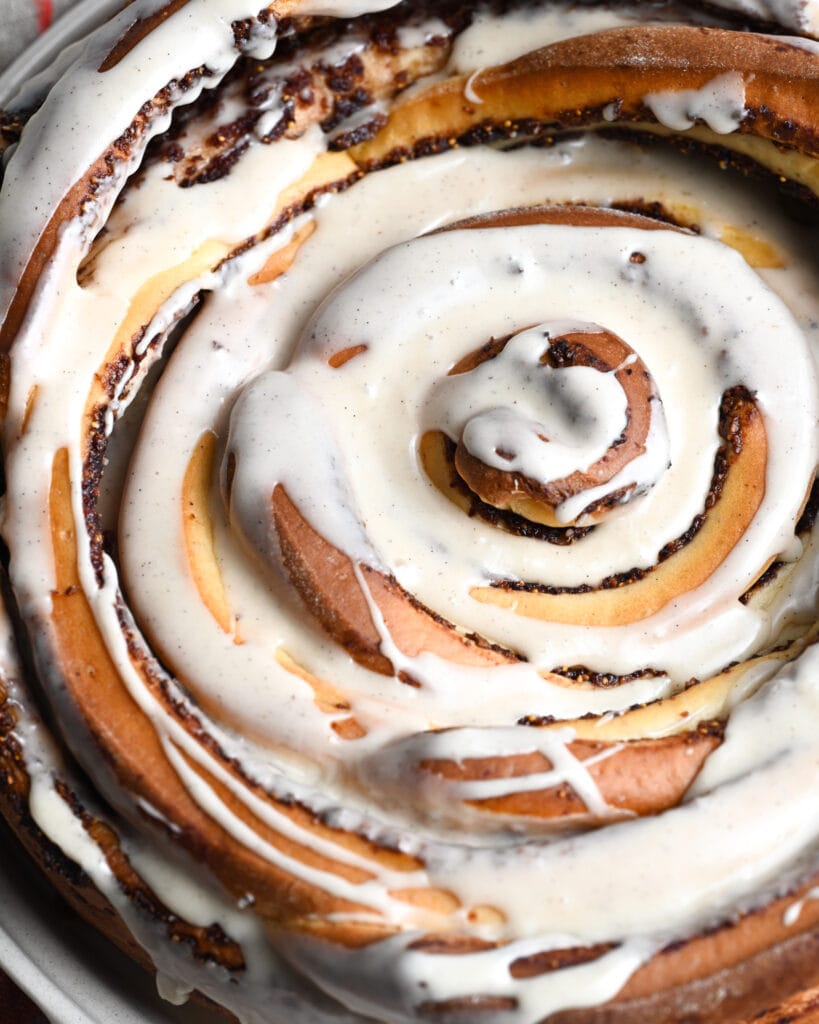 I have been pleasantly surprised with the many readers who have loved this fig & orange bread over the years. Recently, I thought to do a fall spin on fig & bread so I chose the best of fall’s flavors: apple cider, some cinnamon, nutmeg and allspice (all which you’d find in a good apple pie – or donut!).

The bread we’re using here is a newer recipe of mine, a brioche which you’ll be familiar with if you made this chocolate chip cookie bread recipe. It’s got vanilla bean in it and is made with brown butter – lots of little bits that make it super tasty on its own and more so with a lovely filling.

This is such a great recipe for gatherings; a holiday brunch with this a centerpiece for everyone to either pull apart or slice as pie! 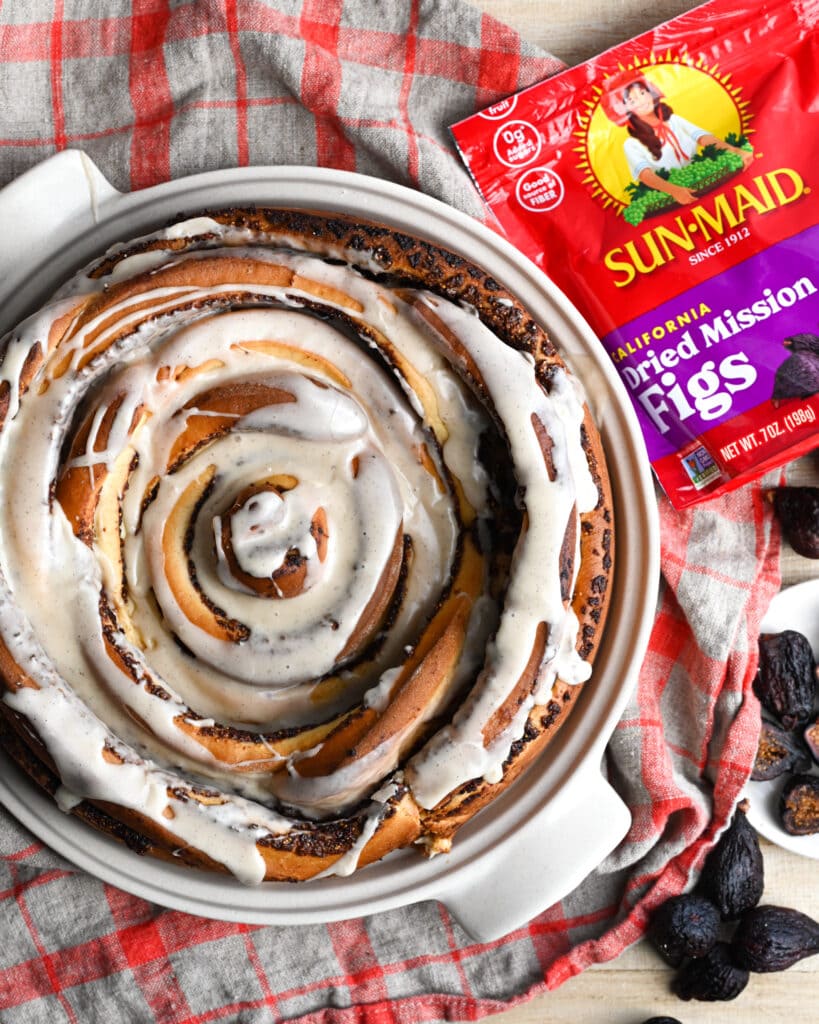 Figs: Dried figs with stems removed. I used one 7 oz bag of Sun-Maid Mission Dried Figs which have a lovely, earthy & natural sweetness to them.

Fresh Apple Cider: This is unfiltered apple juice. It can be found in the juice section of a grocery store and not to be confused with apple juice (which is filtered and has added sugar and water) or apple cider vinegar.

Instant yeast: you can substitute with active dry yeast by adding another ¼ tsp of yeast.

This post was published in partnership with Valley Fig Growers as part of Fall for Baking Szn, in collaboration with Bob’s Red Mill, C&H Sugar, Danish Creamery, Emile Henry, and Rodelle. 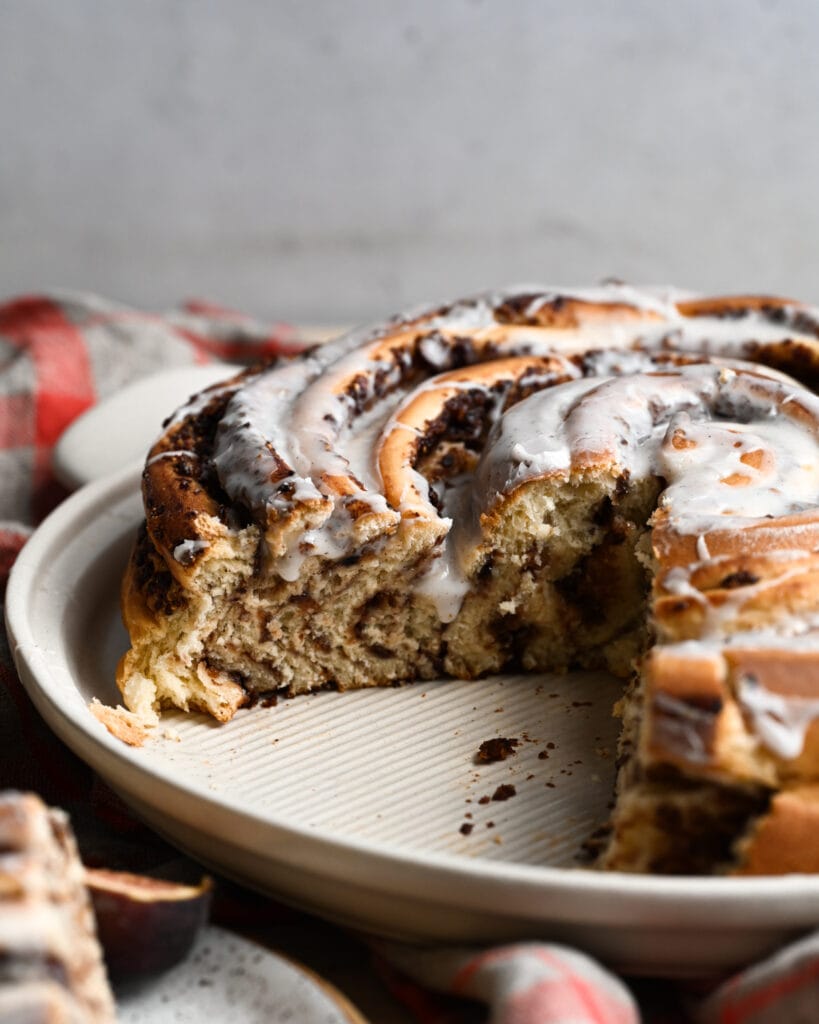 How to make a Giant Family Style Cinnamon Roll

Then spread over the filling (the filling is made simply by putting all the ingredients in a blender).

Here’s where it’s very different than a regular cinnamon roll: You’ll use a pastry knife, pizza wheel or a paring knife to slice the dough into one inch strips.

The first one, you’ll roll up into a coil. The rest you’ll pick up individually, one by one, and wrap them around the coil in the center to make a large coil.

It can get messy (our fig filling doesn’t harden and isn’t as dry as sugar) but, do the best you can and remember it’s not going to affect the final shape of the roll (it bakes up beautifully every time!) 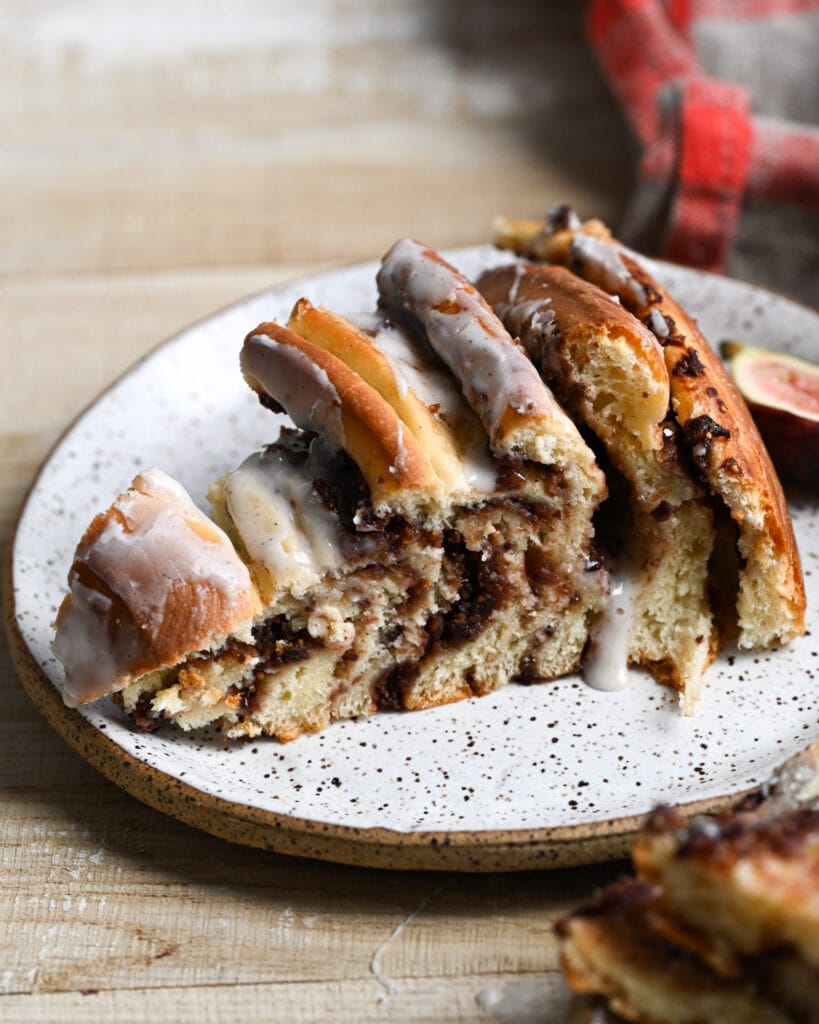 What pan should I bake the giant fig roll in?

To keep it somewhat contained so it rises up rather than out, rather than baking it on a cookie sheet (which you could do) I prefer to bake it in a 10” round cake pan (at least 2 or ideally 3” high).

Can I do the heavy cream trick on a giant cinnamon roll?

Yeah! Pour it over the dough right before it goes into the oven. Just a half of a cup is enough to get into the dough and make it softer, and gooey.

Can I use a different dough?

You can use this milk bread dough (ignore the chocolate filling) or, for something eggless, this sour cream dough. How can I make this fig roll vegan?

Can I make this recipe as individual rolls?

Yes, roll it out and spread the paste as directed. Then roll up the rectangle into a large log and slice. You’ll have enough to fit in a 13×9” cake pan. And in this case I’d strongly suggest pouring over a ½ cup of heavy cream, to make the rolls extra gooey. 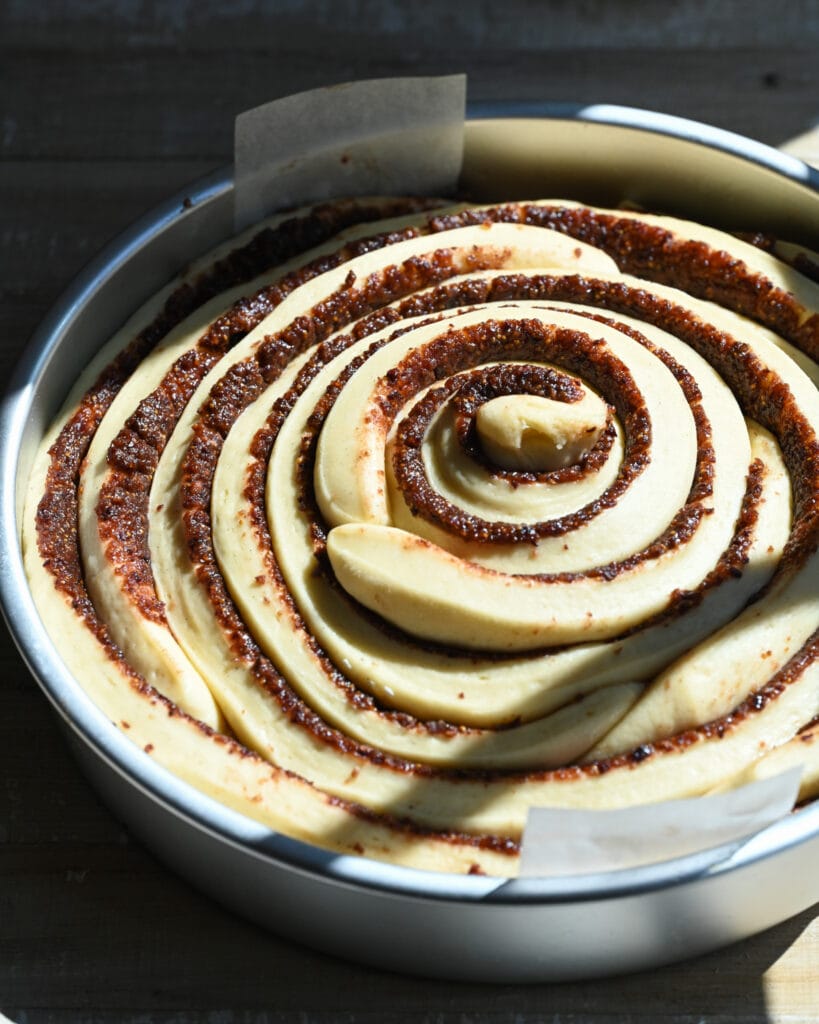 To make the filling

To make the icing 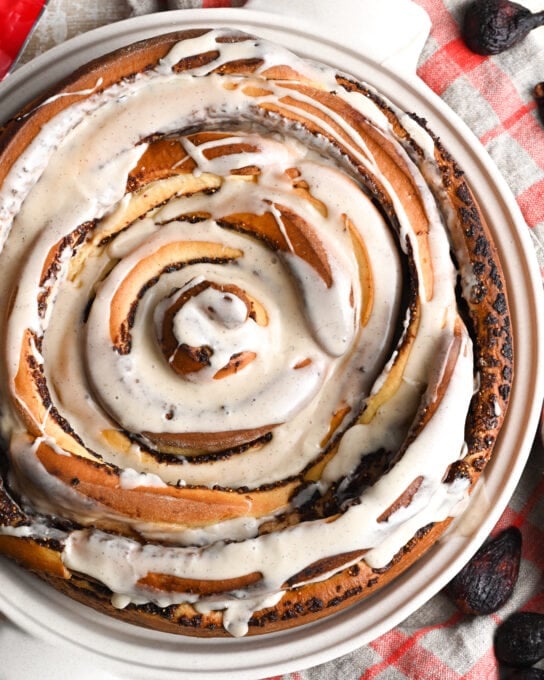