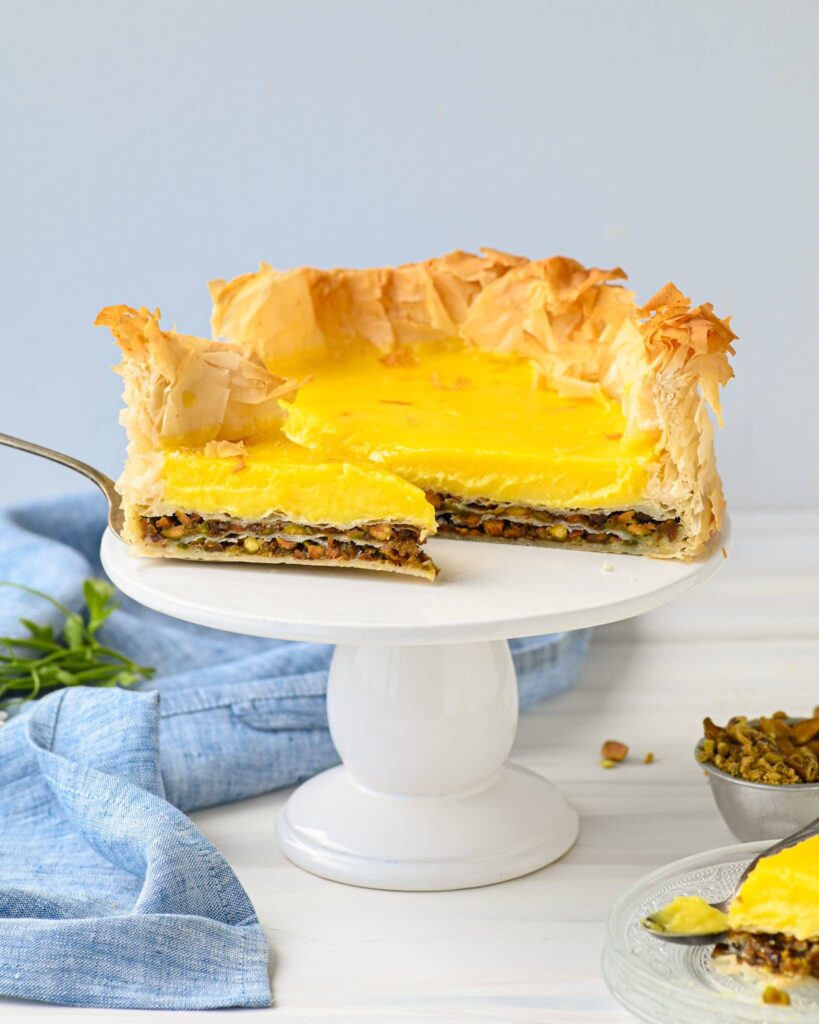 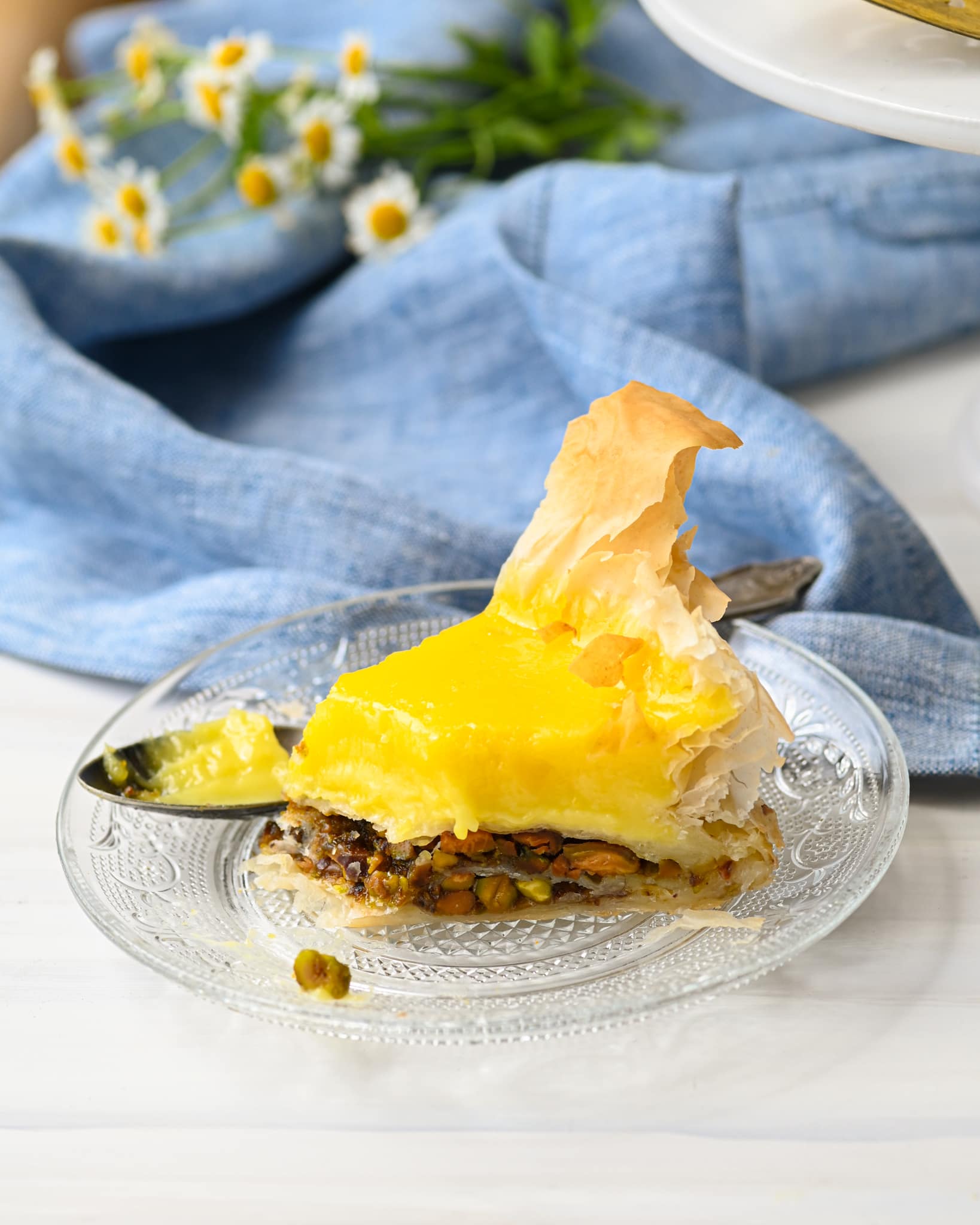 A “fusion” dessert of Lemon, Saffron and Pistachios

Before buttermilk became the blog I devoted my baking and recipes to there were a few others. One of those was a blog wherein I posted mostly what I thought of as ‘arabish’ recipes; I’d combine flavors and techniques from east and west  to produce fusion-style dessert dishes. There were orange blossom scones, a vimto cake, and pistachio blueberry donuts. Ultimately, I scrapped the idea in favor of a space where I wasn’t limited by one concept. But often you’ll see recipes here which have that east/west fusion quality (meyer lemon sumac cake, pomegranate meringue pie, pistachio cheesecake) and this pie fits squarely into that category.

A note on origins: you can learn more about the history of baklava here or here.

After I had made this chocolate hazelnut baklava pie, the idea of doing it again with pistachios whispered to me, incessantly. I had made a variation of this lemon tart and decided to make it again (with some tweaks) and add it here. Saffron? T’was the perfect ingredient to bring this dish to it’s fusion rooted home. 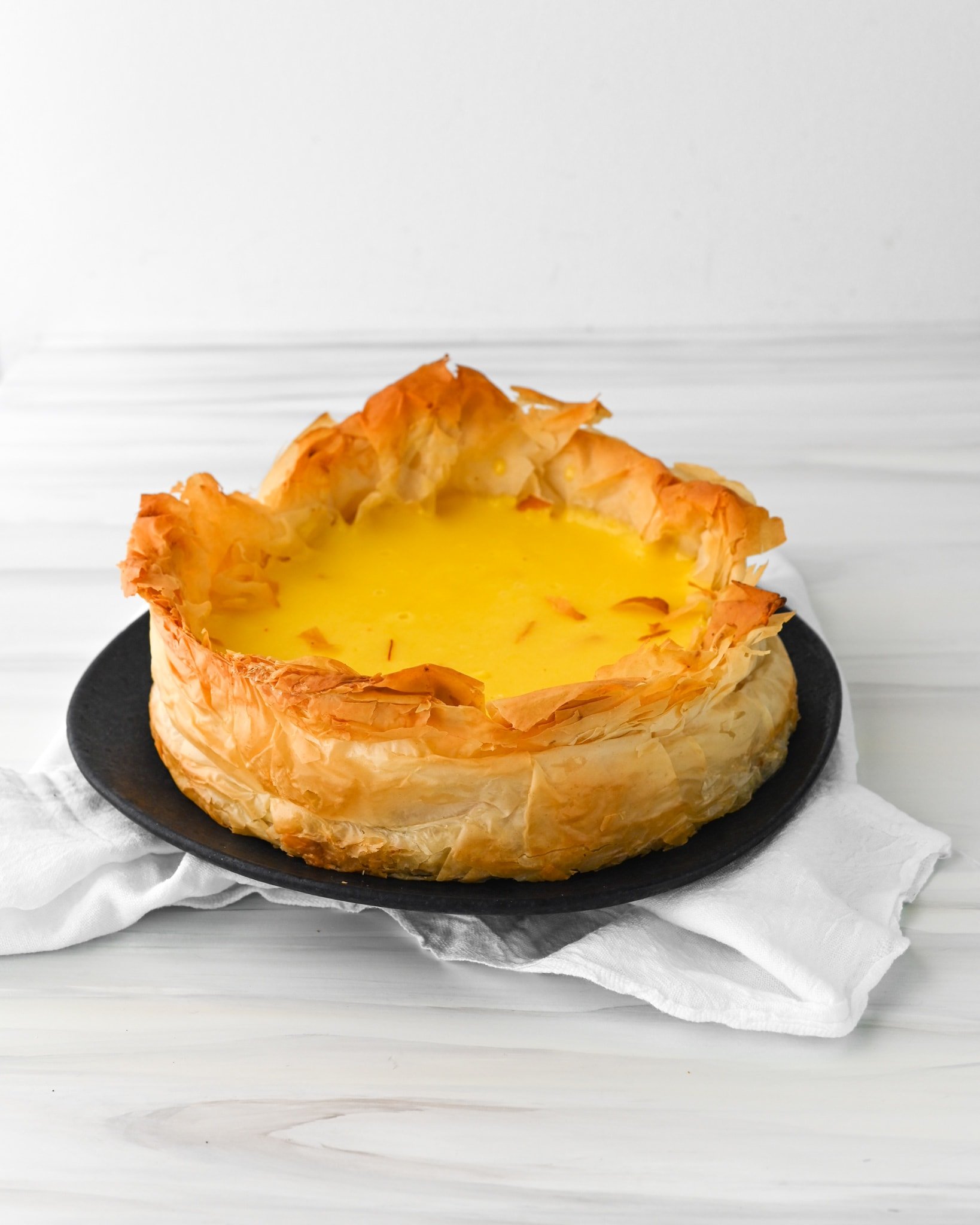 The crust part employs the same method as baklava: layering buttered phyllo dough and adding nuts in between some of the phyllo layers. It’s the most hands on part of the recipe as every thin phyllo sheet needs to be brushed with clarified butter. Once you have ten sheets, you’ll spread half the nuts, then layer on another five, then the rest of the nuts and a final 5 sheets of phyllo. Then, it bakes!

Shaping the crust: You’ll layer 10 phyllo sheets into a 10” springform pan (you can use a 9” too), brushing each sheet with clarified butter or ghee and letting the phyllo hang over the side of the pan this is how the layers look:

Don’t fret if the phyllo is tearing. The beauty of this dish is that it’s always going to look rustic so it doesn’t matter if it tears here and there.

Once everything is in, crumble the sides so there’s no overhang (if you don’t they’ll bake on top and the crust will break as you take the springform off) but keep them ‘standing’. The crust will puff up in the oven on the bottom and shrink on the sides, this is normal.

I personally used ghee here, so I wouldn’t have to make the clarified butter myself, and if you can’t find ghee you can use melted butter (you’ll likely need more than what’s listed below as there’s lots of milk solids in butter). 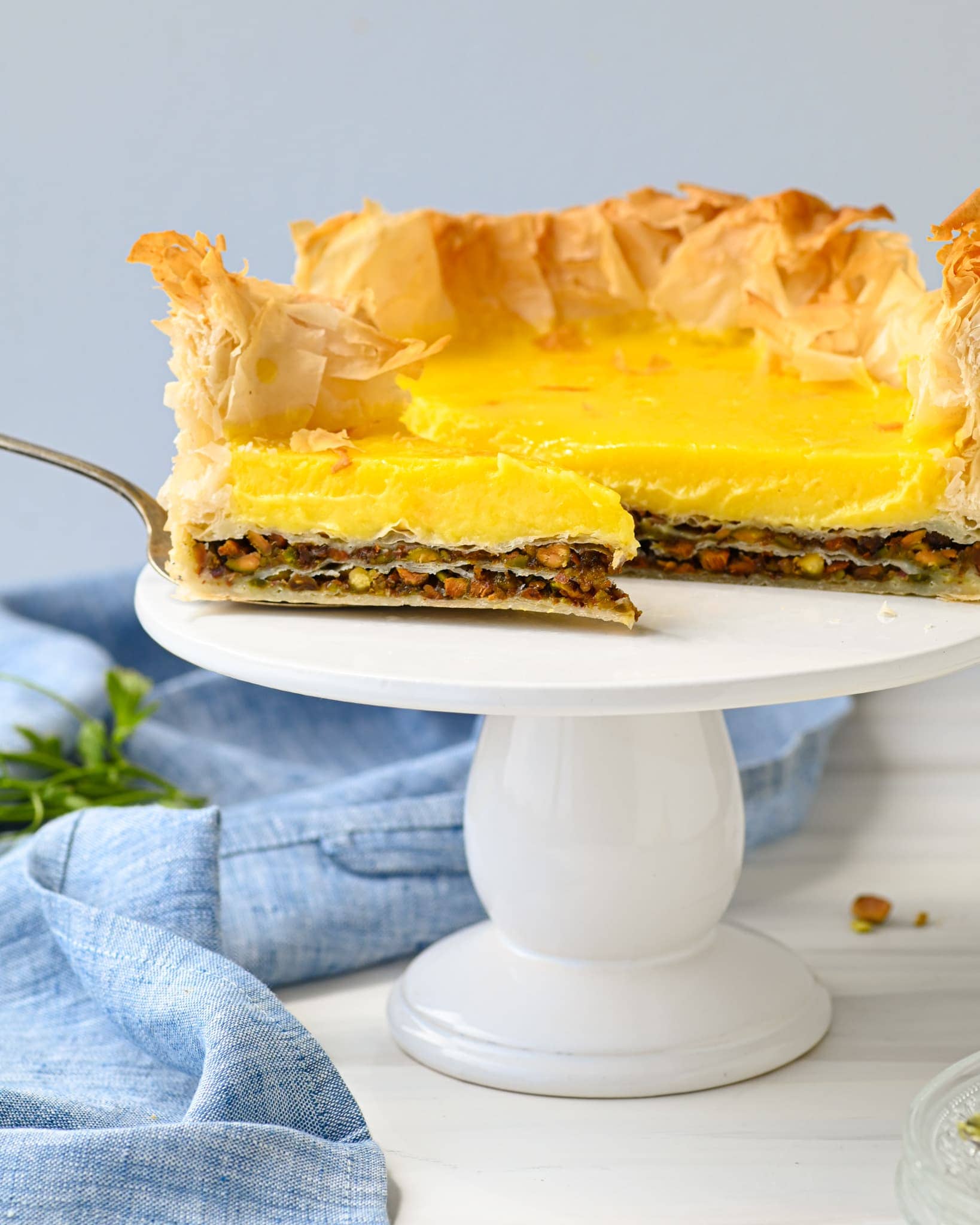 This is my best lemon curd recipe, with a little bit of saffron which gives it a floral sweet undertone. The way to make it is fairly simple: rub zest and sugar together to release the oils, add all ingredients except the butter to the pot and cook until it thickens. The butter goes in last, a technique I read about a few months ago, incorporating it slowly contributes to that smooth, buttery texture. 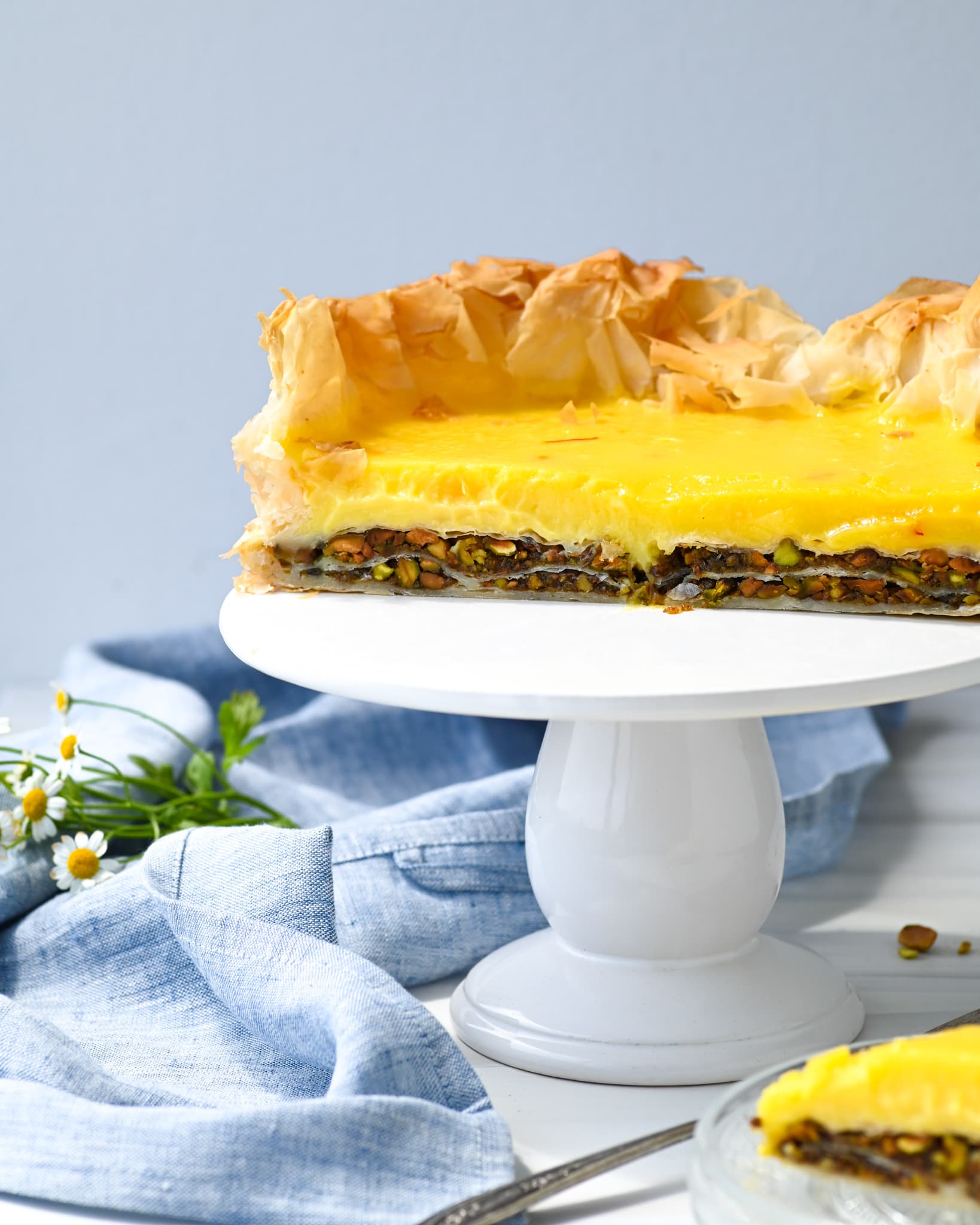 Crispy, buttery pistachio baklava crust filled with the smoothest most lush and lemony filling ever. 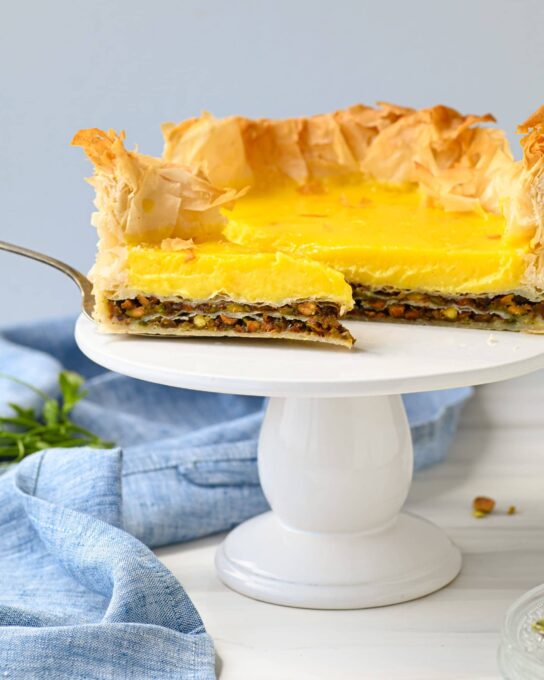 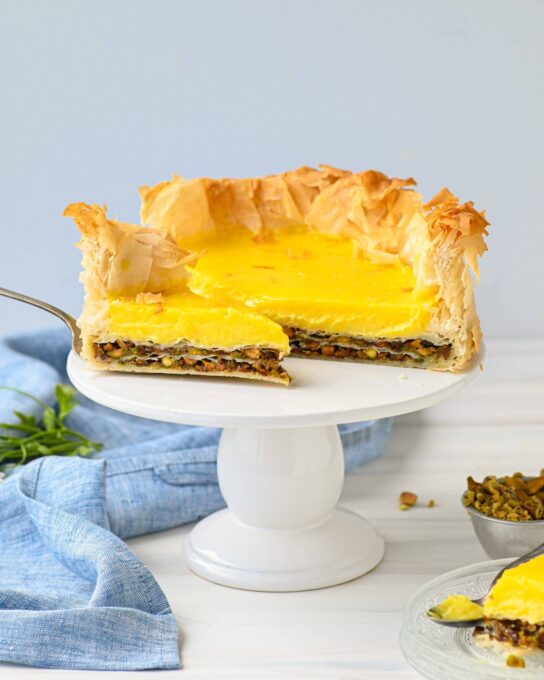