Tart lemon gelato studded with the gentle crunch of poppyseeds and swirled with a sweet roasted blueberry sauce.    Sam 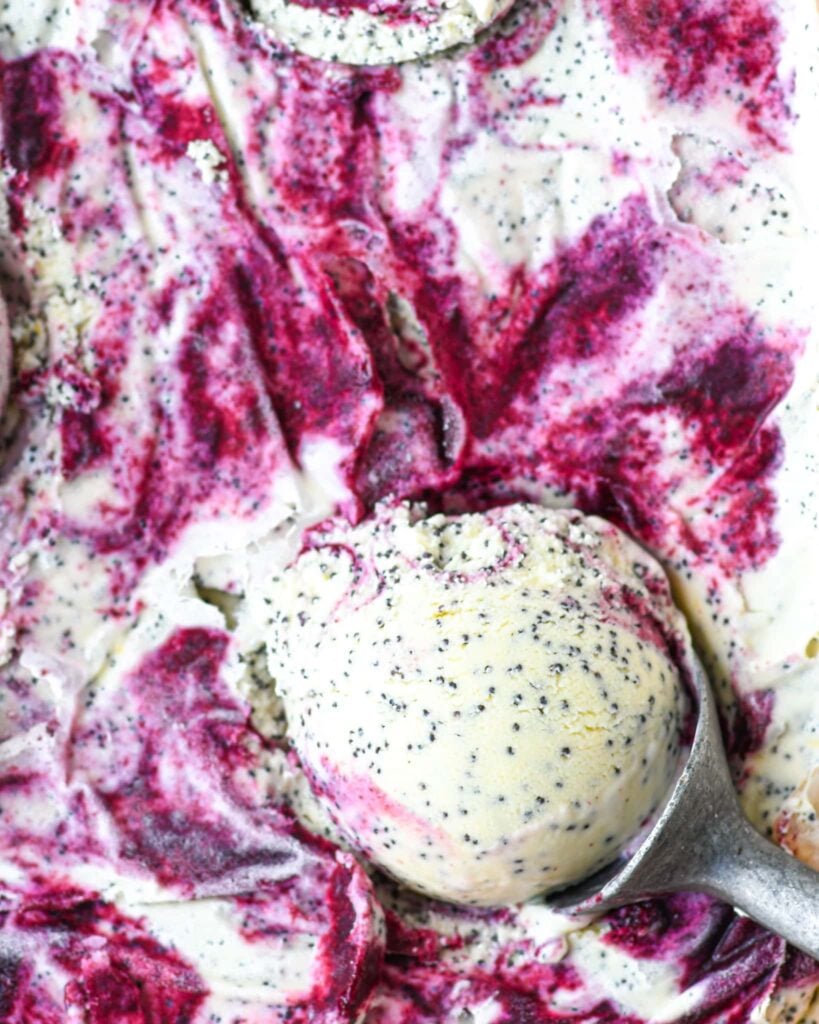 Tart lemon gelato studded with the gentle crunch of poppyseeds and swirled with a sweet roasted blueberry sauce. 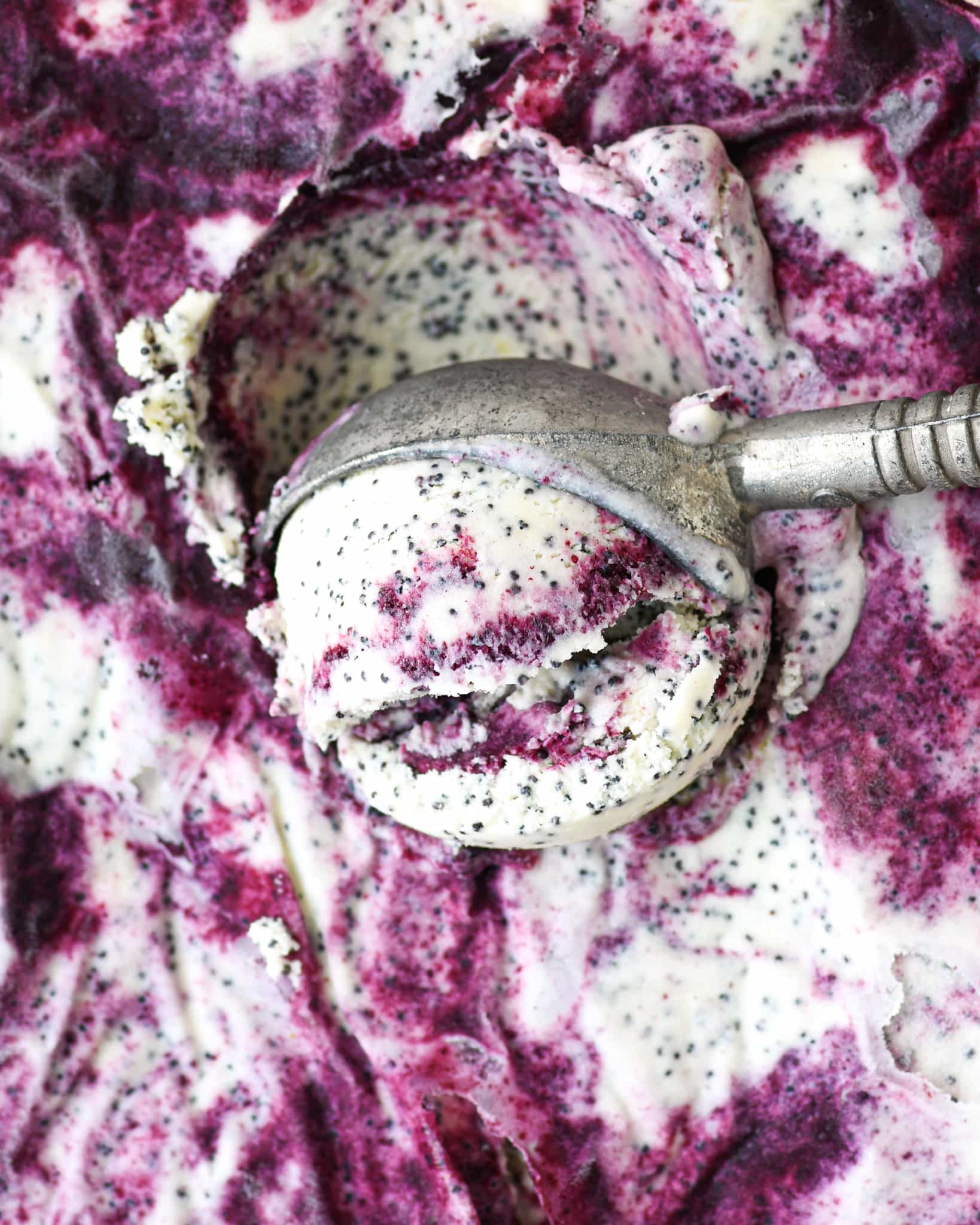 A long, long time ago, back when yours truly was a young poly sci undergrad with dreams of becoming a photojournalist, I got an evening/weekend job at a local Italian-style cafe. In my interview for the job, I had talked about my knowledge and love of baking and the owner was really into it. She hired me on the spot as a barista with a plan to eventually transition me to the back where they made the gelato.

I had that job for about two years and have held (at least) ten others since, some good, some bad. But that was my favorite. I knew it at the time. I’d stand next to the giant gelato machine while it churned, scrape it down with a flat spatula into a long, metal dish trying to make a pretty design and think – could there be a better job than this? Once I was a settled into my new role, I started coming up with my own flavors for the cafe; oreo was my signature flavor (this is what happens when you leave an American in the kitchen, lol). Nowadays when I work on ice cream recipes I like to think I have a little bit of a professional background doing it! 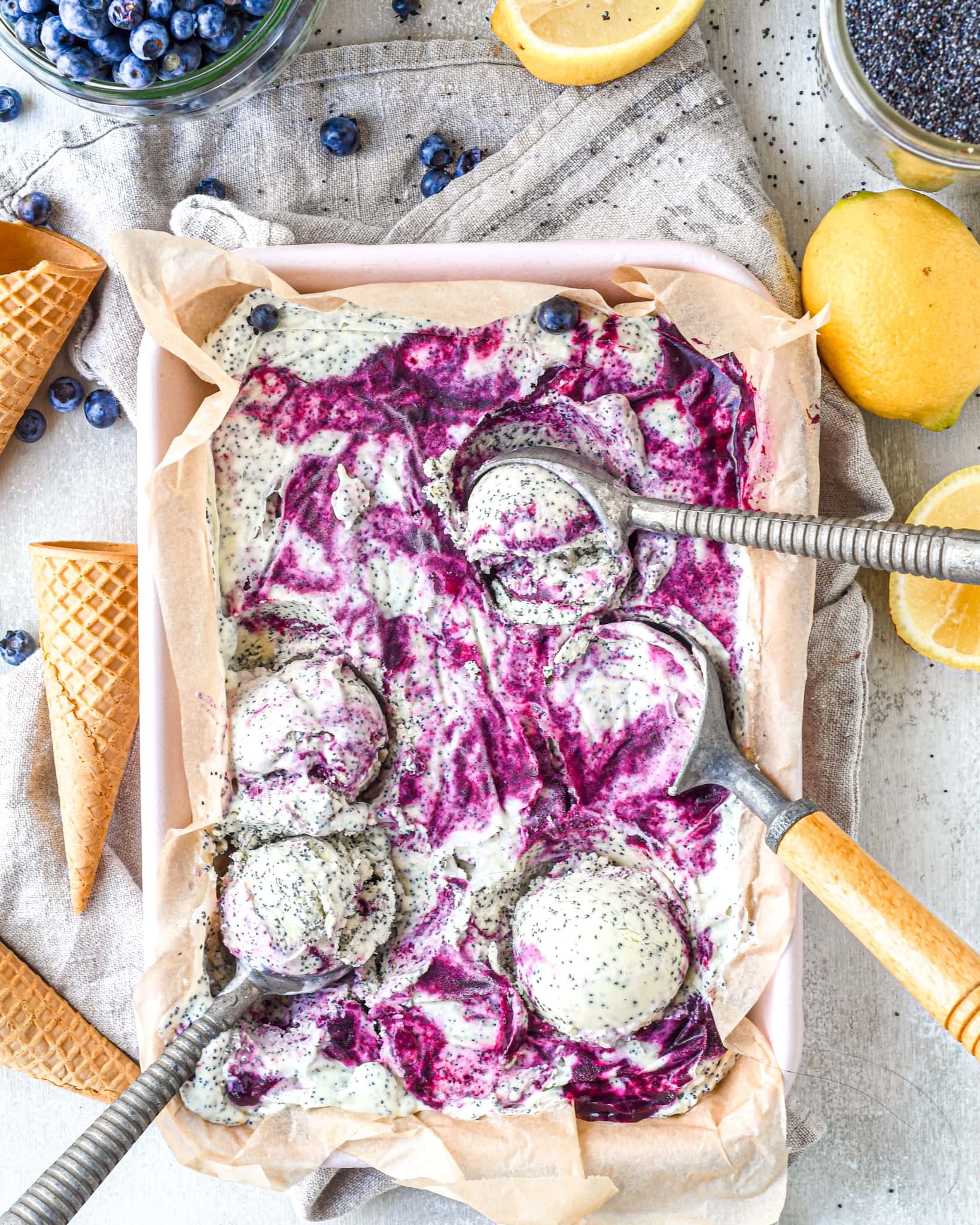 What’s the difference between gelato and ice cream? I’m so glad you asked, I was trained to answer this on my first day at the job! Gelato has a higher amount of milk than cream; a lower percentage of fat, and is churned at a slower rate so less air is incorporated, making it dense. It’s also served warmer so it’s softer. Although I used an ice cream maker to make this, I am dubbing it gelato because it fits the description: there’s more milk than cream, no egg yolks, and texture wise it’s quite similar to gelato (you may need to let it thaw a bit before serving). Even with the lack of fat, it is creamy and incredibly smooth – save those cute little crunches from the poppyseeds! Also, I remember reading somewhere awhile back that home ice cream makers, because they are slower than industrial, produce a texture more similar to gelato. I can definitely see this to be true! 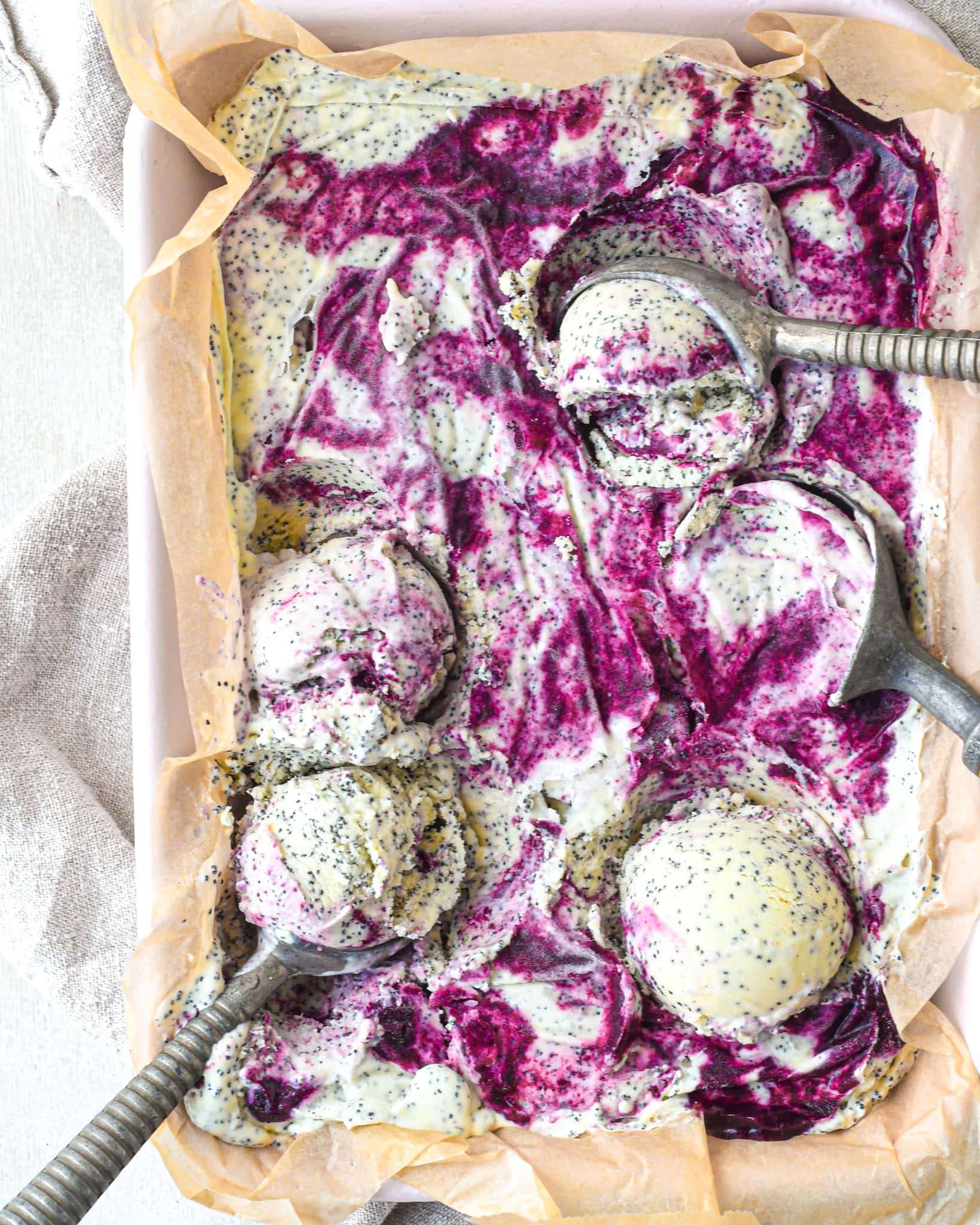 I hope you know by now how I feel about poppyseeds being an afterthought. I never want to just speckle a muffin or a bread with them and instead want a full poppy experience. Obviously, there’s much more than a spoonful in this recipe. You could make a lemon ice recipe sure, that’s been done though. And maybe someone somewhere added blueberries to it. But a lemon poppyseed ice cream with a more than a tablespoon? And blueberries slow-roasted to produce a wonderfully strong, concentrated berry flavor? This is the one you want to make =)

Things to keep in mind: 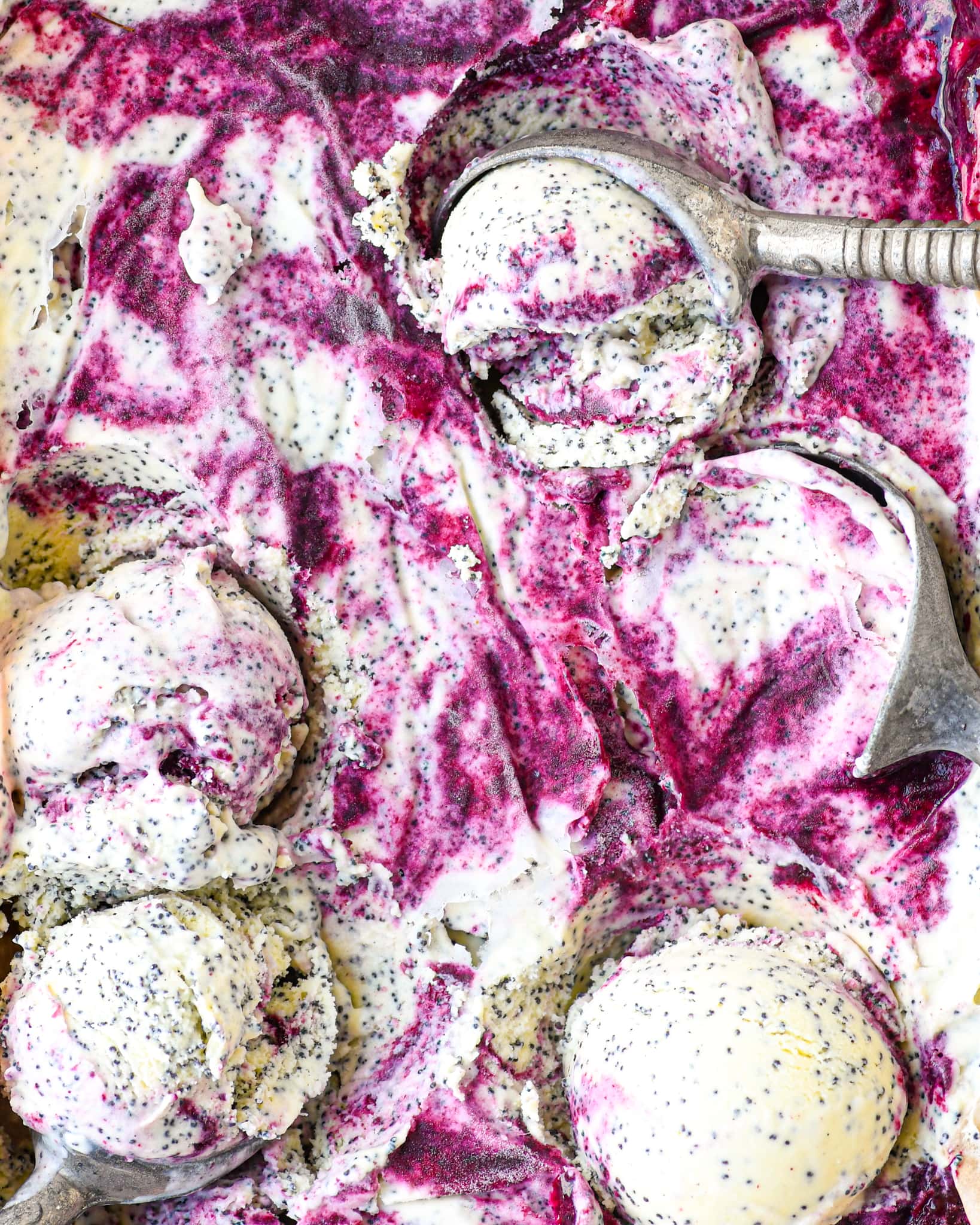