Today is Galentine’s day, one of my favorite annual celebrations. There is something truly special about gathering with your closest gal pals and celebrating each other and girlfriendship. I started doing Galentine’s day parties a few years ago but only on and off since the arrival of babygirl (who, you know, makes hosting big parties just a tad more difficult). But, I hope it is a tradition I carry on in the future which she can learn from; the importance of keeping your girls close and uplifting each other.

Let’s talk cupcakes! Cupcakes you should make for your gals! The idea for these popped into my head after I bought a handful of ruby chocolate – on sale this week just in time for Valentine’s 😉 I chopped them up for some chocolate chunk cookies at first but the taste wasn’t as prominent as I would have liked. I toyed with a bunch of ideas in my mind, none of which got me as excited as…. pink dipped cupcakes! To make these even more valentine’s themed, I gave the cupcakes a ‘heart in the middle’ kind of situation and sprinkled on some tiny heart funfetti. And I mean, does it get more on theme than this? But also that dipped pink is suitable for any time of year when pink is required <3

Let’s talk about what you need to know before making these:

For the heart in the middle cupcake

I’ll outline how I did mine but you can use it as a guide and do whatever tickles your fancy, keeping all my tips in mind. 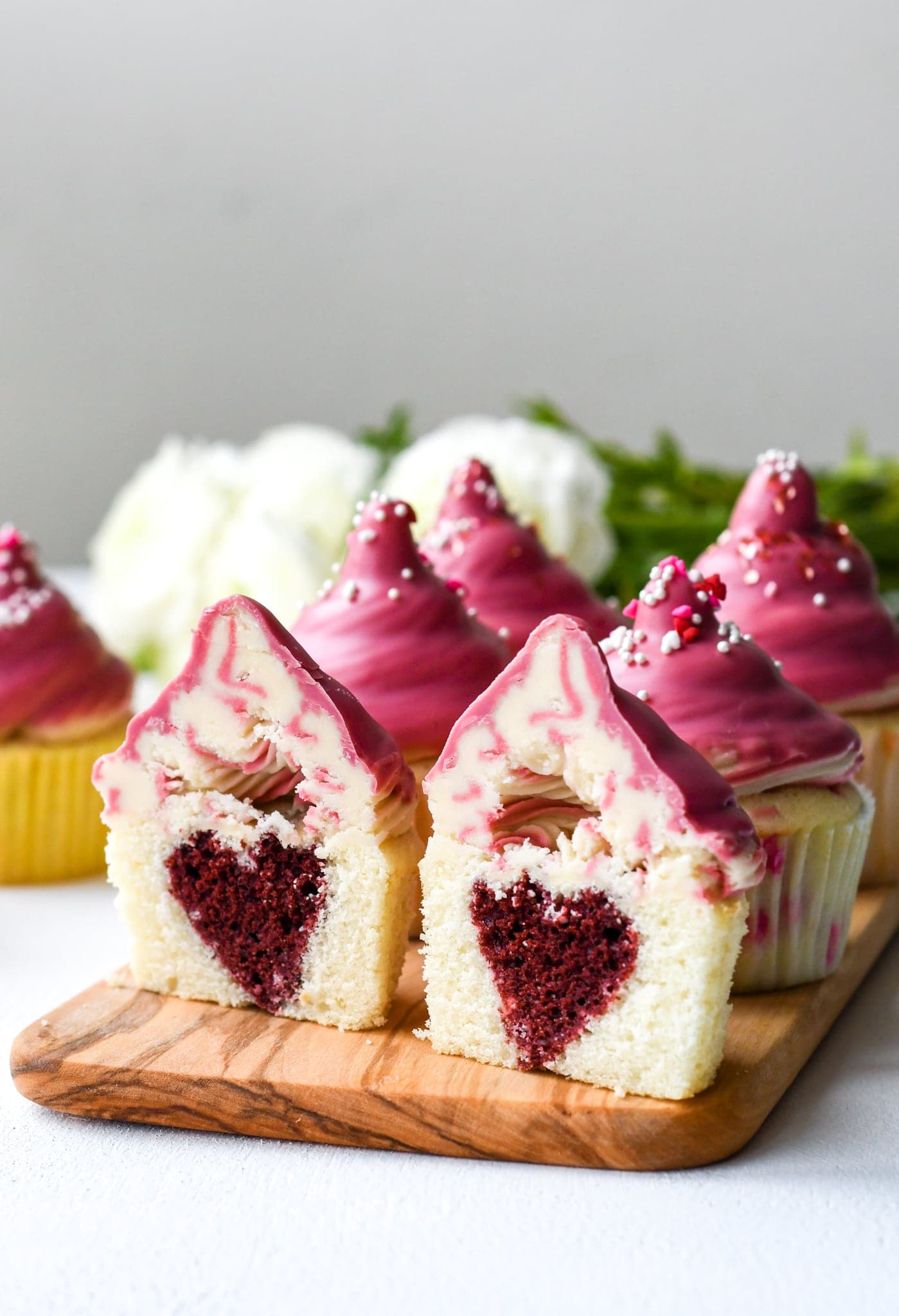 Line cupcake tin with liners and fill 1/3 of the way with the white batter, place the heart in the center, standing. You can fill more batter around it if you want the heart top to stick out, or you can pour more batter on top of it (just make sure the heart doesn’t lean or fall under the weight of the batter.) Bake for about 10-15 minutes. This is going to depend on the recipe and you’ll want to check it from time to time after the 10 minute mark. Just remember the center is already baked and your goal is to ensure that the batter around it bakes without burning the cakes.

Beat the butter, salt and vanilla until the butter has turned pale in color. Add the powdered sugar and milk and beat until fluffy. Set aside until cupcakes are cool. Pipe onto cupcakes. Place cupcakes in the fridge so buttercream can harden and chill.

Chop chocolate and place in heat-safe bowl that will fit in a pot without touching the bottom. Fill the pot to about 1 inch high with water. Bring to a simmer and then reduce heat to lowest setting (if your stove runs hot, just shut it off). Place bowl with chocolate over the hot water and stir until fully melted. Add salt and oil and stir to combine.

You are ready to dip when your chocolate is not too hot to touch but fully melted. Pour it into a cup that will comfortably fit the height and width of the piped buttercream. Working quickly, dip each cupcake and shake gently to remove excess chocolate (if there is such a thing!). The dipped cupcakes take about 20 minutes to set. 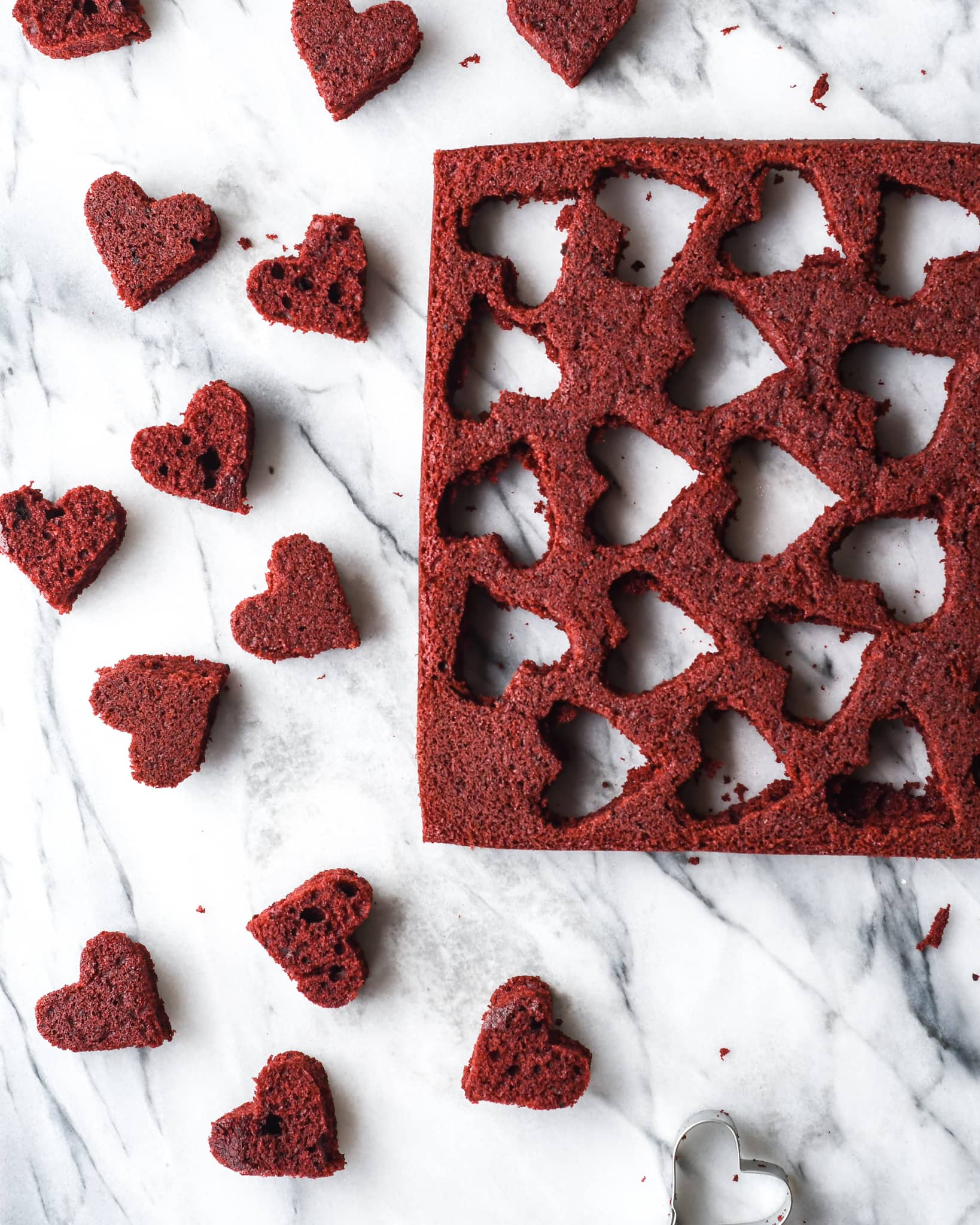