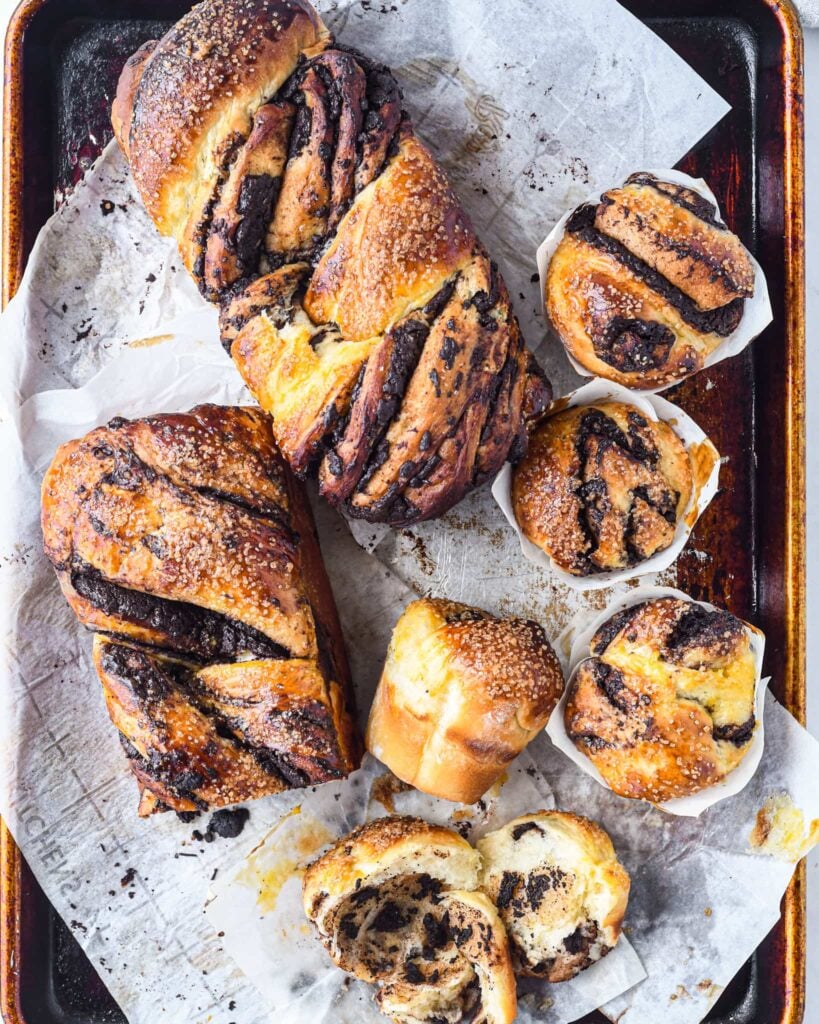 There are two ways to babka: the more commonly associated brioche dough (most recipes you find use this, similar to Bread’s Bakery babka) versus challah, a softer bread that uses oil, not butter, as a fat. The latter is probably how babka originated, with home bakers spreading jam or cinnamon over leftover challah (apparently the bread met chocolate in new york, source). My husband and I are, perhaps unpopularly, decidedly on the latter team. I think most people are team brioche because that is the form in which babka has been popularized, but today I hope to convince you over to our side.

I am not jewish or Eastern European, and I did not grow up eating babka (although, I very much wish I had!). Like most people, I learned of it from the internets. This popsugar version, is the first babka I made about 5-6 years ago. They had called it chocolate challah although the link has now disappeared (I now think it’s Alexandra Cooks’ recipe because the picture is the same). I had made it once and instantly fell in love. This biased me early on to what babka should feel and taste like. I don’t think a full two months has gone by since summer 2015, when I haven’t made ‘chocolate challah’ and every single time it has been more than well-received by my peoples (and my belly, lol).

We made a trip to NYC a few years later and tried the famous Bread’s Bakery babka (this was during peak babka trend of 2017 ), and, well, sad to say, it was very different than I imagined and I didn’t fall in love (although have you tried their cheesecake? To die for!). It was dense, almost croissant like in texture, which I get is kind of the point. But we preferred the soft and tender challah base that I made at home. If you are familiar with any of my bread recipes, you know they are usually variants of a challah/enriched dough. I have been mostly satisfied with my recipe, until now. 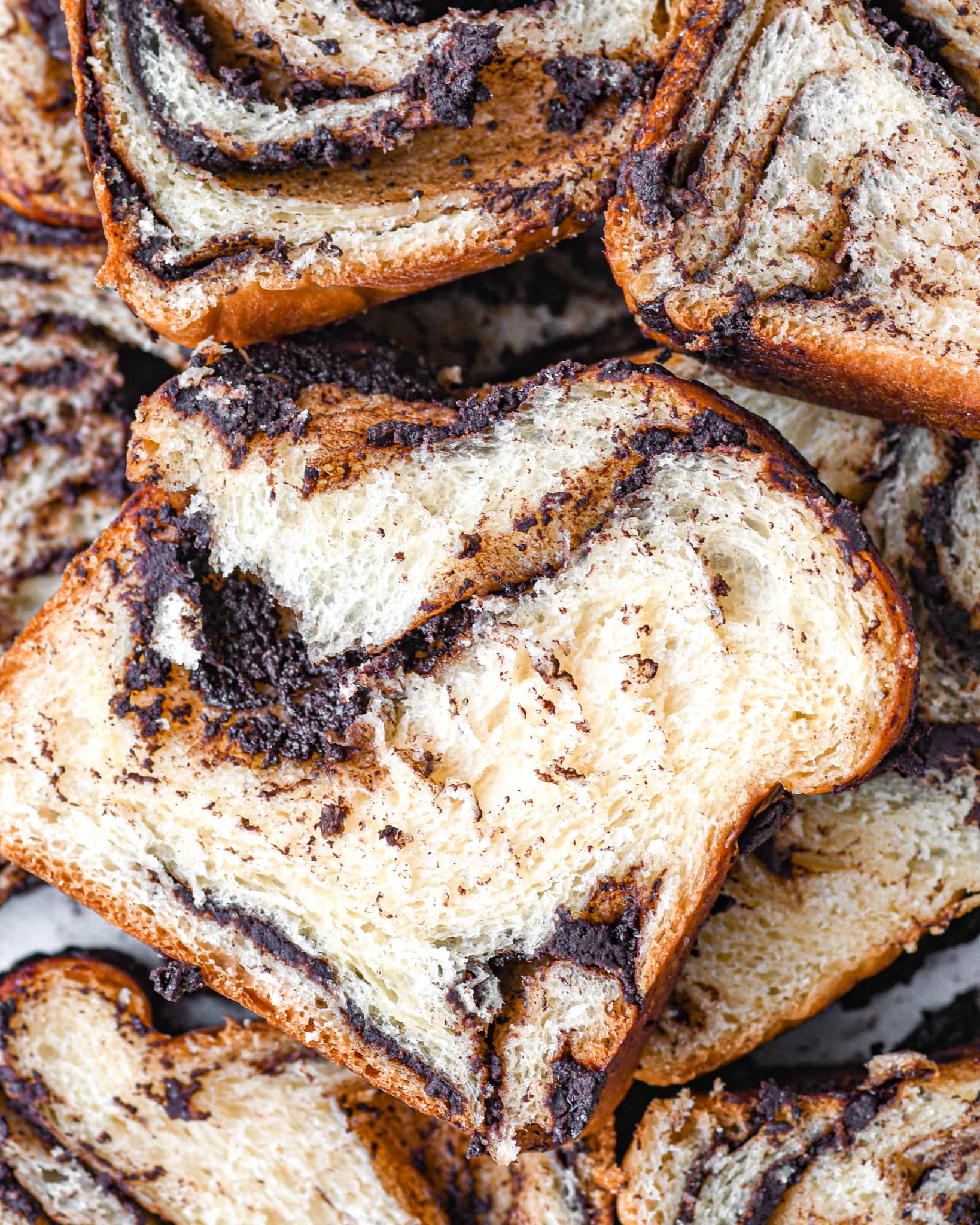 What is “milk bread” and how is it made?

Hokkaido Japanese milk bread is made with a tangzhong: a water (or water & milk) roux, ie. a thick paste made from heated flour and the liquid. The roux method is unique to this dough and yields a very tender result, this is because the starches are gelatinized without forming gluten. On this topic, Dini, via The Flavor Bender writes: “The starch molecules in tangzhong absorb far more liquid than it would at room temperature. When this is added to the bread dough, the tangzhong adds MORE water to the dough, and a stable, soft matrix that creates a cushion-like, spongy texture in the final baked product.”

If you’ve seen pictures of japanese milk bread rolls, you know that the roux method results in a super fluffy and tender interior. Some adjectives used to describe this bread I found from various sources: “lofty, feathery white bread”, “soft, springy texture”, “wonderfully tender” and, “Soft, fluffy, airy, tender, springy, pillowy….” I think you get the picture.

A hybrid way to babka

One of the criticisms challah gets, especially as a base for babka, is it’s dryness. This is partially because it doesn’t have butter added to it, and there’s a likely risk of adding too much flour; something I have overcompensated for in the past by giving you weight measurements rather than cup, to make sure your dough is very soft and sticky (to many of my reader’s distress, sorry guys!). My own struggle at home has not been with the dough itself but that the bread is great the first day but less so afterwards and I’ve always wanted it to last longer. I’ve also been lusting after IG photos of milk bread for years and decided I’d try it in my challah.

I’m not going to pretend I fully understand the process of starch formation and gelatinization of dough, but I am going to tell you that this is THE way to make bread. I had seen that nyt’s highly rated milk bread recipe (via julia moskin) had ingredients and quantities similar enough to the challah I usually make, and from that that I worked it into a milk-bread style challah. I don’t use as much yeast, and of course, I swap the butter for oil, to stay true to the jewish challah origins. I guess you could say this is a fusion bread of japanese/eastern european/newyork food culture.

The very tiny trick of making a roux first to addd to the dough made a huge difference. My challah’s have always been soft, but not THIS soft. They’ve been tender but not this tender. This is pillowy, lofty, feathery… all the things they said it would be. It was softer for days too! And then I added chocolate, and swoooooon. This is going to be the only way I babka from now on, and after you try it, I bet it will be yours too.

How to make the tangzhong (roux) for milk bread chocolate babka

It sounds harder than it is, but it’s dead simple: in a small saucepan set over medium heat you’ll combine equal parts water and milk, with some bread flour. You’ll simply whisk it until it thickens into a paste and then remove it from the heat. I pour it into the bottom of my stand mixer bowl and let it cool while I prep the rest of my ingredients. Then, I dump everything into the bowl and attach the dough hook and turn the mixer on. It needs 5 minutes only to come together. How easy was that? (cue Ina’s twinkle)

If you get your dough right, it’s very hard to go wrong in taste with a bread and chocolate combination. But over the past few months I’ve seen readers struggle with making my brownie babka ‘pretty’. So here’s some tips (and a fabulous way to have some muffin style mini-babkas!):

Chocolate babka made with the japanese tangzhong method to yield the softest, most tender bread swirled with a deep dark chocolate filling. 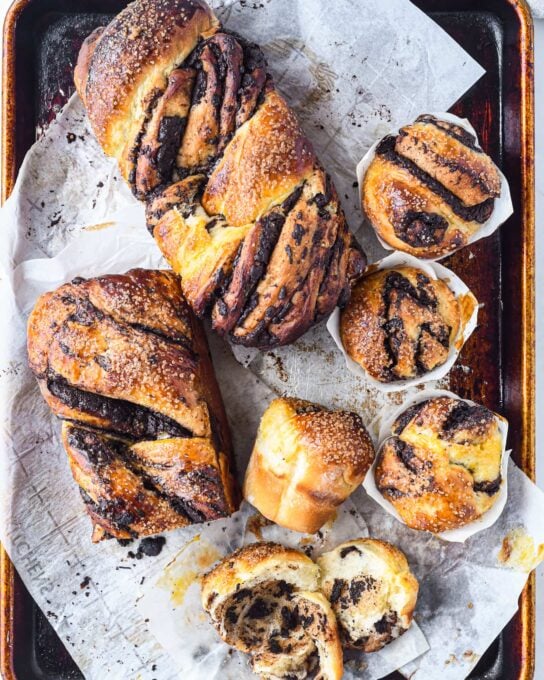