In January of this year, Mars, Inc. released a new candy bar: the snickers peanut brownie squares. It’s a brownie, filled with crunchy peanuts, topped with their signature caramel and wrapped in chocolate. I took one look at the image of it on Google and said, Imma do it.

The brownie part? Ten minutes. The caramel, another ten. Waited awhile for the caramel to set (about an hour) then cut it into squares (took some ‘sample’ bites, promptly got badgered for bites by my family) then and dipped it in melted, tempered chocolate. I placed the tray in the fridge so the chocolate would set quick. With the chocolate firm but the brownie and caramel still warm, they were really, really good. Next day, I took one out of the fridge… and they were, oh my god, absolutely phenomenal. 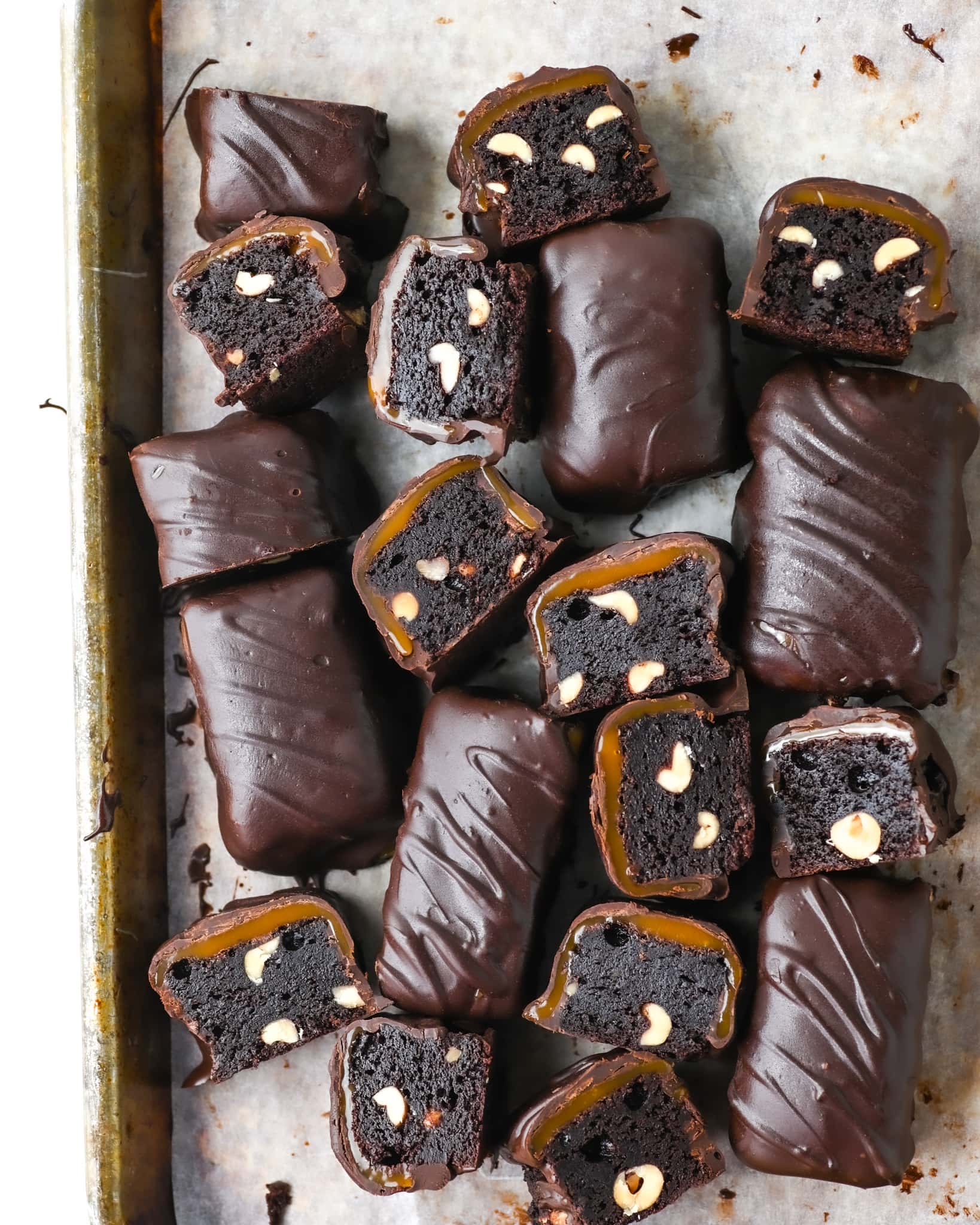 Better than a copycat recipe for snickers brownie squares

So here’s the thing, I don’t actually know what the bar in the stores tastes like because I never bought it. I don’t love candy bars. So this recipe is not in exact copycat style, instead it’s my brownie recipe, covered in my caramel recipe and…. as a standalone amazing fudgy brownie filled with peanuts (you can also do almonds!), topped with caramel and chocolate, they are AMAZING. You are going to love them! 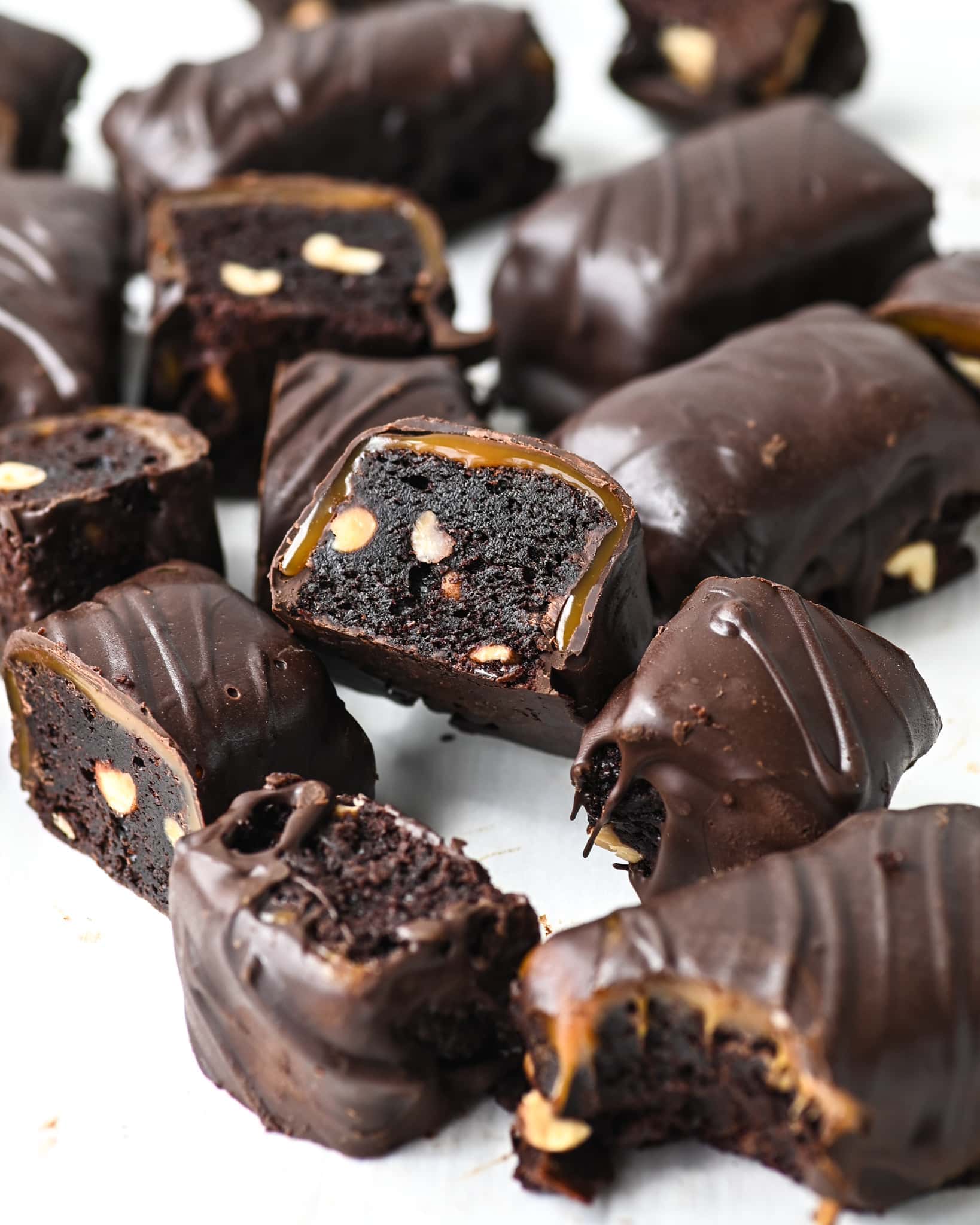 It took me a few years to develop my signature brownie recipe and if you’ve made any of the brownie recipes on this site (thick cocoa, shiny top, oreo meringue, etc) you’ve seen a variation of it. To get it to be more fudgy and chocolatey I use a lot less flour, dutch process cocoa and I employ a simple heating technique to melt some of the sugar before the batter goes into the oven. Recently I’ve scraped the double boiler method in favor of the microwave to make it even quicker and more efficient.

For these peanut brownies I used the same recipe (reduced by 25% so they wouldn’t be as thick) and added peanuts. I wished I had added more but I’ll make sure you get enough for yours!

Also, chilled brownies are THE BEST. These get so fudgy and dense in the fridge so you’ll see instructions here to keep them cold.

How to make firm but creamy caramel

There are a ton of caramel recipes out there but this one was specifically developed for bars, it’s buttery and sweet but also thick enough to set on the brownies and still chewy. It’s wonderful!

To make it you’ll heat sugar in a large pot (I use a 2 quart pot) and let it cook over medium heat until it first turns liquid then caramelizes. Once it begins to caramelize you can stir it to get an even caramelization, as soon as it’s done you’ll add the remaining ingredients and stir until the caramel is smooth. I let mine cool a bit because caramel is HOT and I didn’t want it to affect the texture of the brownies. Then smooth it out and let it set. 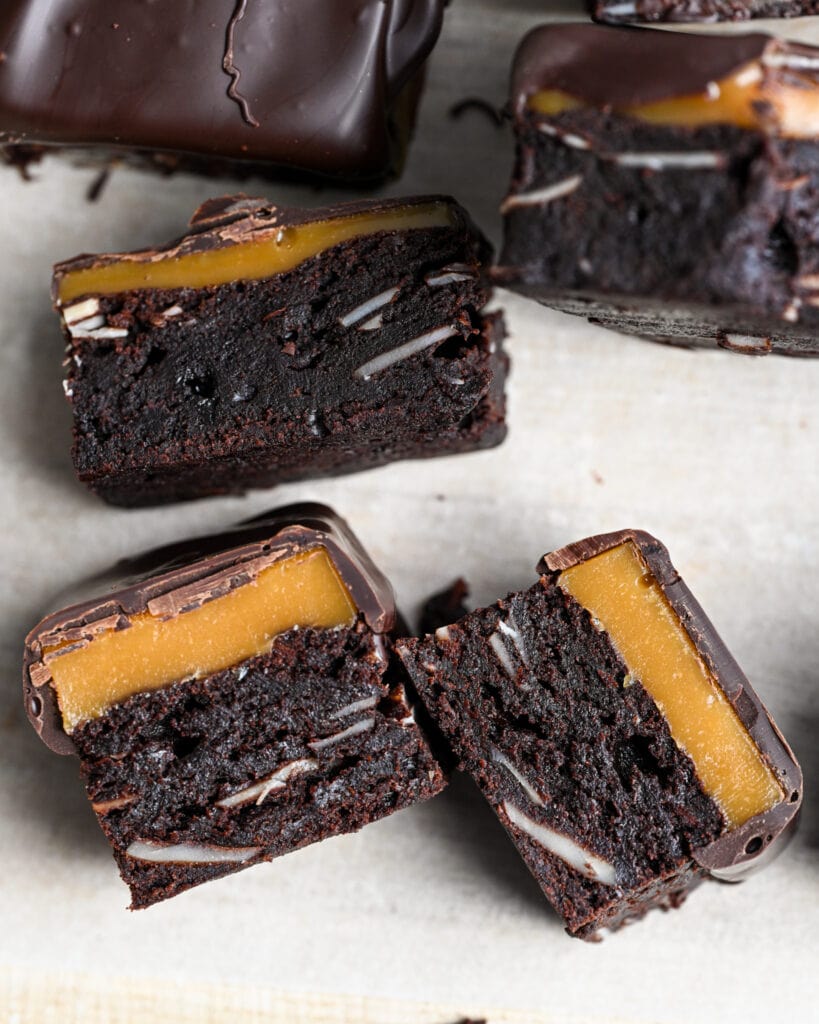 After about an hour (use the freezer if you need to), and once the caramel is firm cut the brownies into squares/small rectangles and set them on some parchment paper. Melt some dark chocolate (Snickers likely uses milk chocolate, but on top of the caramel that’d be too sweet for me, you do you though!) but ensure you do it right so it doesn’t get out of temper. Then, dip! You can dip it fully in but some brownie bits might get in the melted chocolate so I had mine on a fork and spooned the chocolate over it.

Temper the chocolate & coat the brownies 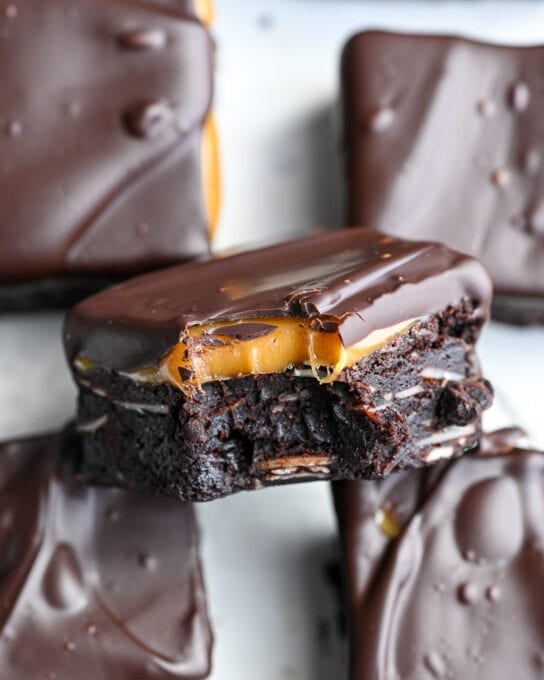