These fudgy chocolatey brownies have a secret cookie dough layer baked in which stays ‘dough’ like even after baked! 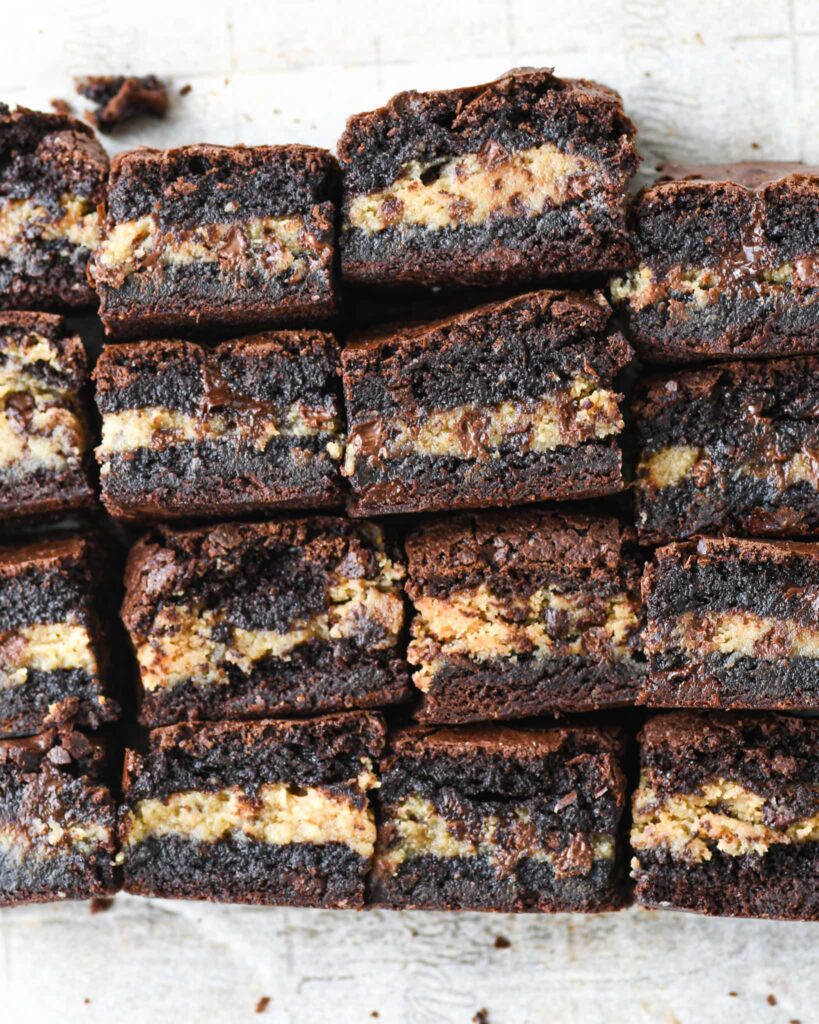 Our beloved brownies are now stuffed with cookie dough! A cookie dough layer that stays soft and ‘dough’ like is baked into the center of the very best, thick fudgy brownies. 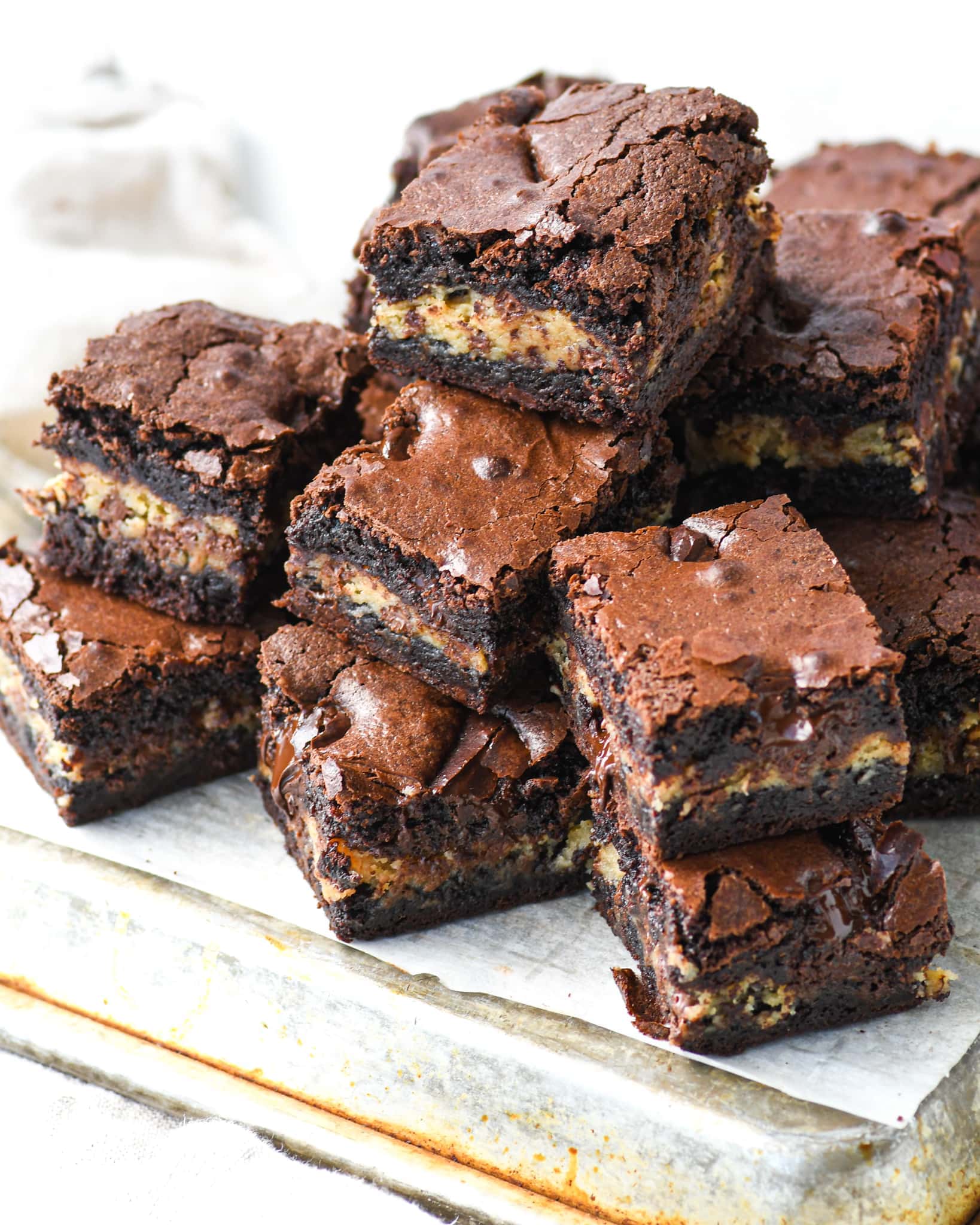 I cannot claim credit for this brilliant idea. That goes to my 3 year old daughter, Lilia, who, back in the spring, randomly said to me from across the living room, “Mama you should make brownies with cookie dough.” I immediately LOVED the idea, it was not long after I had made my cookie dough pie and so edible cookie dough was already hot on my mind.

Combining cookie dough and brownies isn’t new. When I did a search, a ton of recipes came up, all fairly similar: a layer of brownie (fully baked) and atop it a layer of unbaked cookie dough. But when Lilia had suggested it, what popped into my mind was something like this Cookie Dough Cake by Jenna of Butternut Bakery; I wanted to bake the dough straight into the brownies so it would be a happy surprise within each bite.

(below: my first attempt, back in February) 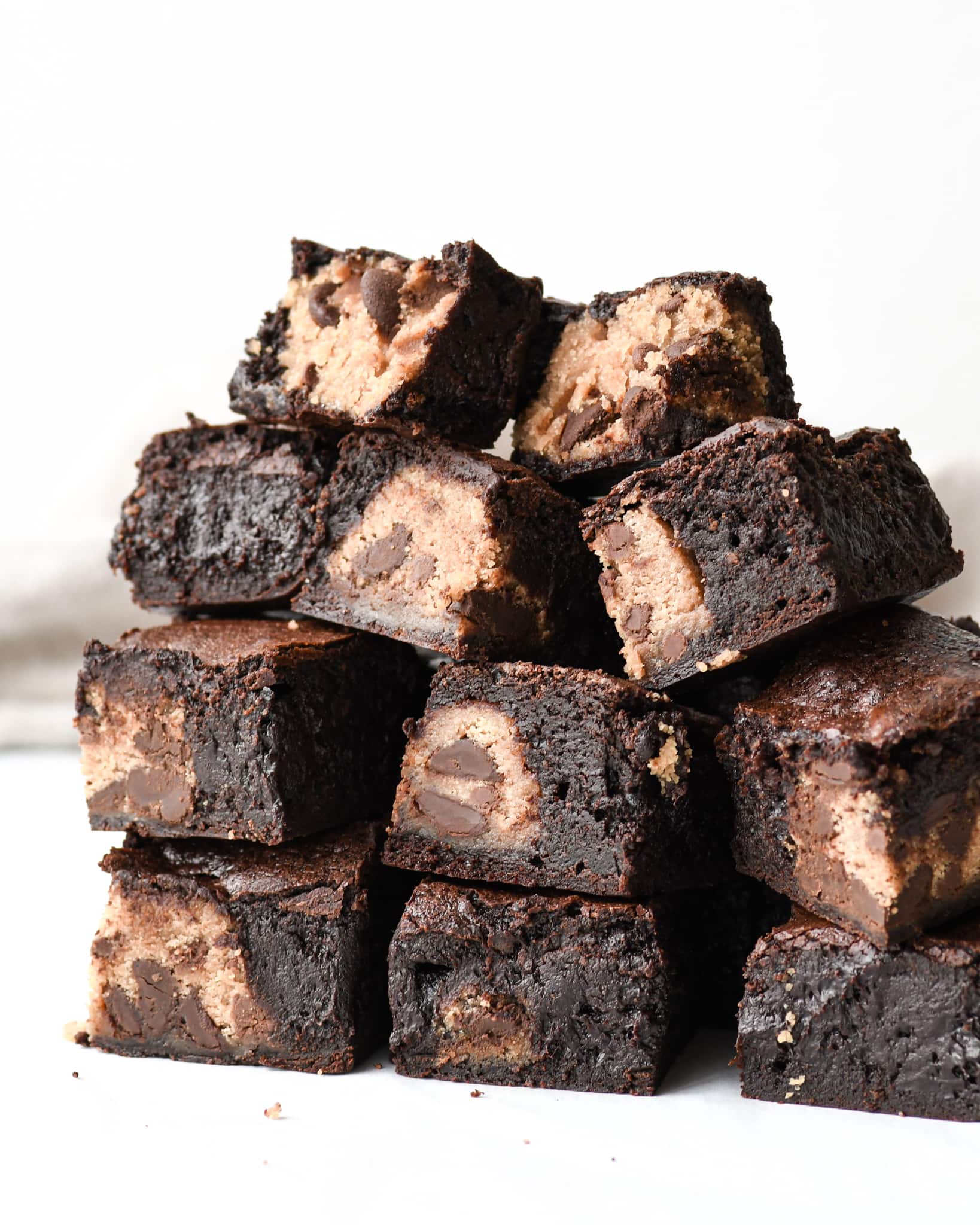 Two parts to this recipe: cookie dough layer and brownie

In these brownies are three layers and two parts: brownie, cookie dough, more brownie. If you’ve made either of my brownie recipes before; this one will be familiar. Since I really wanted a lot of ‘gooyeness’ as well as that flaky top, I went with my ‘shiny top brownie’ recipe. It uses a mixture of cocoa and chocolate; the added grated chocolate gives it the signature flaky and shiny top and really leans into a fudgy, gooey interior.

The cookie dough layer was a bit trickier to nail down. The first time I made this dish I adapted the dough from this chocolate chip cookie ganache pie recipe and used heavy cream to thin out the texture, but the dough got hard and crumbly after it baked (you can kind of see it in the photo). The second time I kept the recipe but froze the cookie dough; and had the same issue. I went back to the drawing board to find a way to keep the dough super soft even after it was baked.

In order to thin out the dough but keep it soft even after it bakes between two baked brownie layers, I needed something that would give it moisture, and resist the heat of the oven to firm it up. I guessed that sweetened condensed milk could work; this is milk that has had most of the water removed and sugar added. To the dough it would add some sweetness (which is why I reduce the sugar a bit) but the heavy dairy/sugar liquid here means that the dough won’t bake.

I keep several cans of Eagle Brand®’s Sweetened Condensed Milk in my pantry for various uses (see hazelnut bars, no churn ice cream, dulce ganache, one pint personalized ice creams) and pulled one out to make the dough and it worked like magic. The dough stayed doughy! 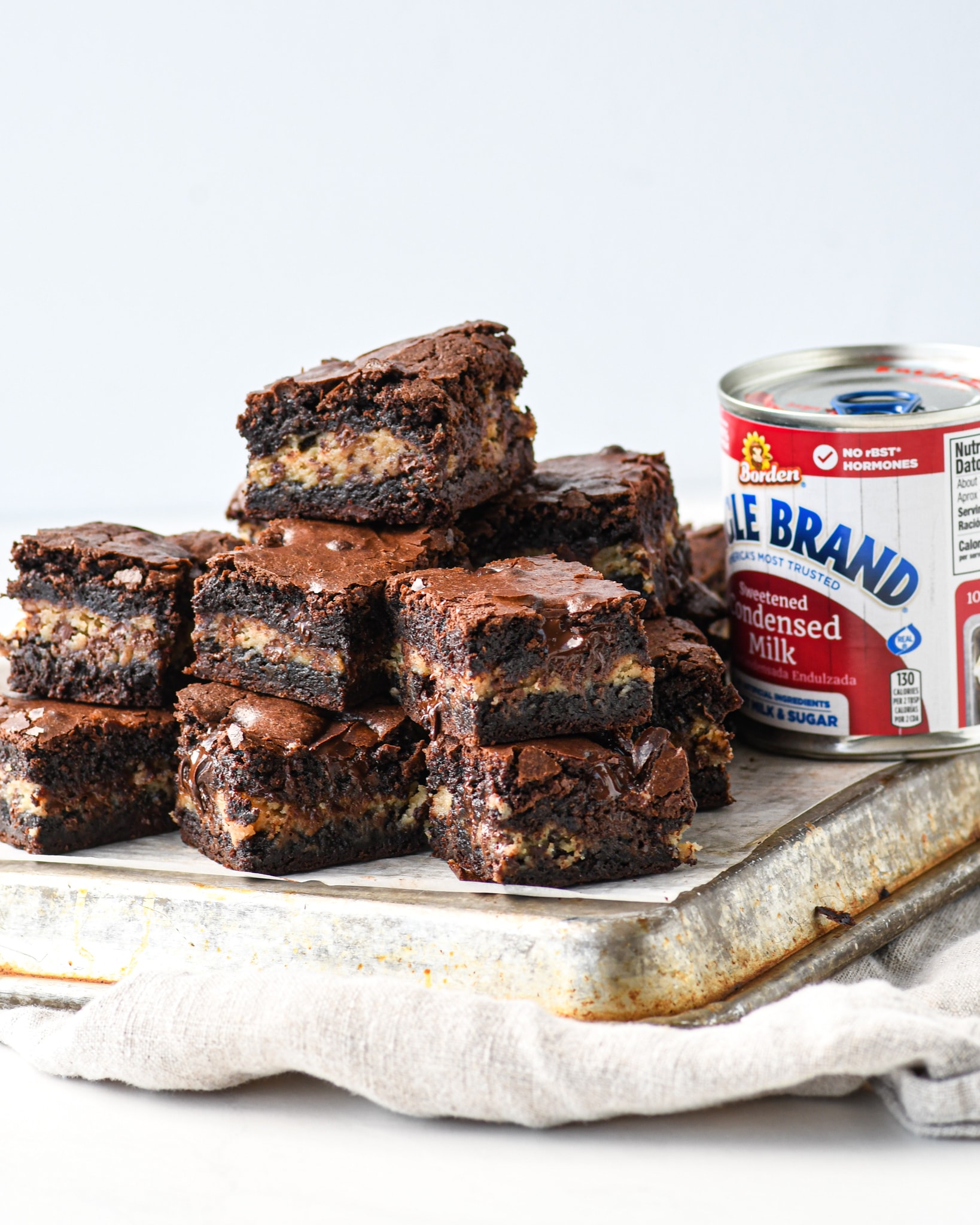 You’ll make this similar to most cookie dough recipes: beat together the butter and sugar and add the rest of the ingredients. There is no egg (we don’t want these to bake into actual cookies) and there is less flour. Speaking of flour: you may wish to heat-treat the flour by toasting it on a sheet pan for 5 minutes in a 350 F oven, but it may be that the full dish bakes long enough that you needn’t worry, although I did not test this with a thermometer to confirm.

To freeze the dough you’ll layer parchment paper in a + shape so you have overhang on all four sides of the metal pan (the one in which you will be baking the brownies). Then spread the cookie dough into a single layer and stick it in the freezer.

It needs to be frozen until solid (I usually do it for 8 hours or overnight) but if you want to have it ready a few days ahead, move it out of the pan you shape and initially froze it in and store it in an airtight container to avoid freezer burn. 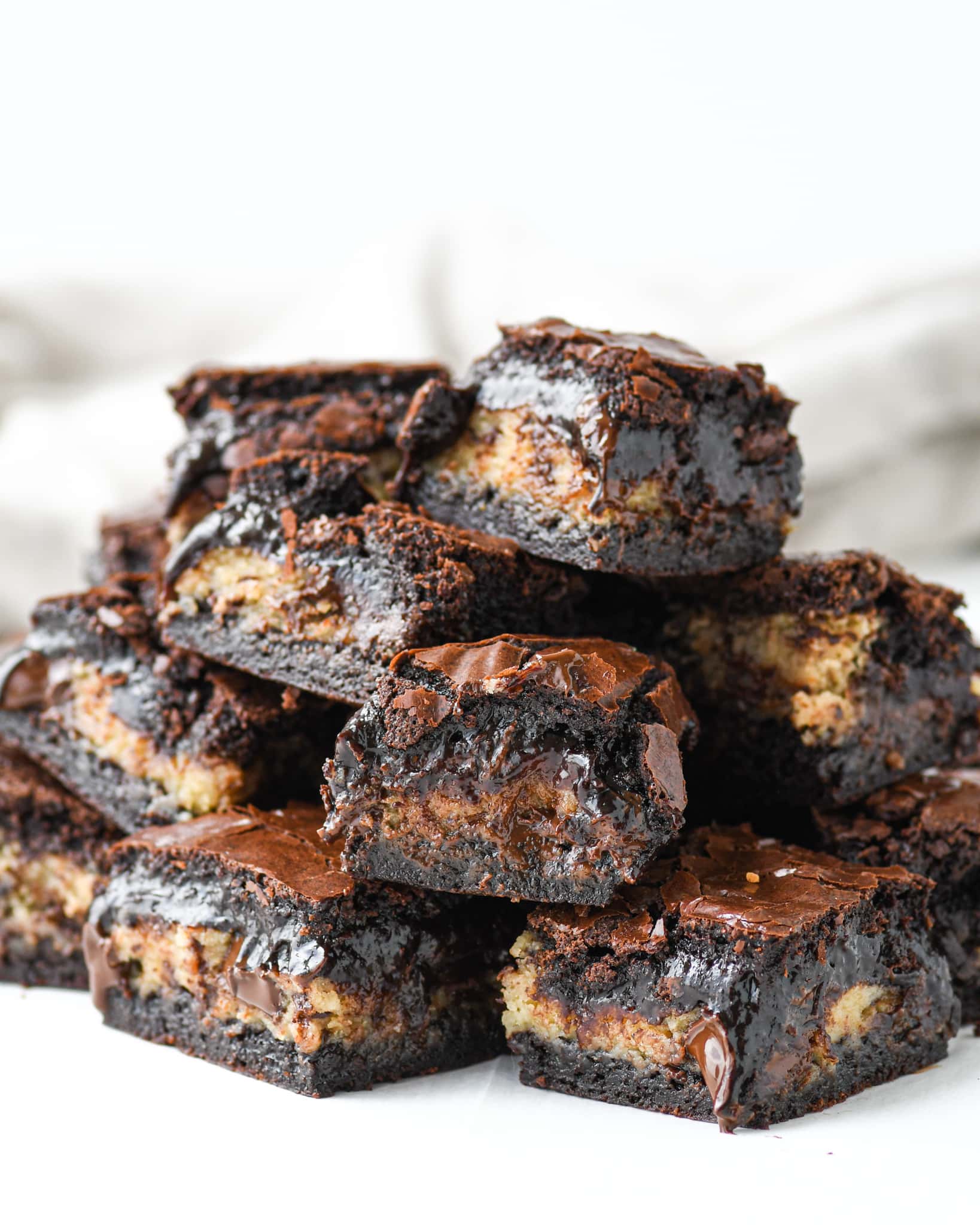 Once the cookie dough is made and frozen, you’ll make the brownie batter. I cook my cocoa, sugar and butter over a double boiler (a heatproof bowl over a pot of simmering water, don’t let the water touch the bottom of the bowl) and then add the rest of the ingredients and whisk them in. For the chocolate you can use a food processor to make it very fine or you can do this with a knife, but do your best to get tiny bits.

Bake time: This is the trickiest part to this recipe; you want the brownies to be done, but not overly so to keep the cookie dough soft and the brownies fudgy. I give a bake time here but in reality it could vary based on your oven and the material of the pan you use. Use your senses to check; when it’s just slightly puffed in the center it’s done. 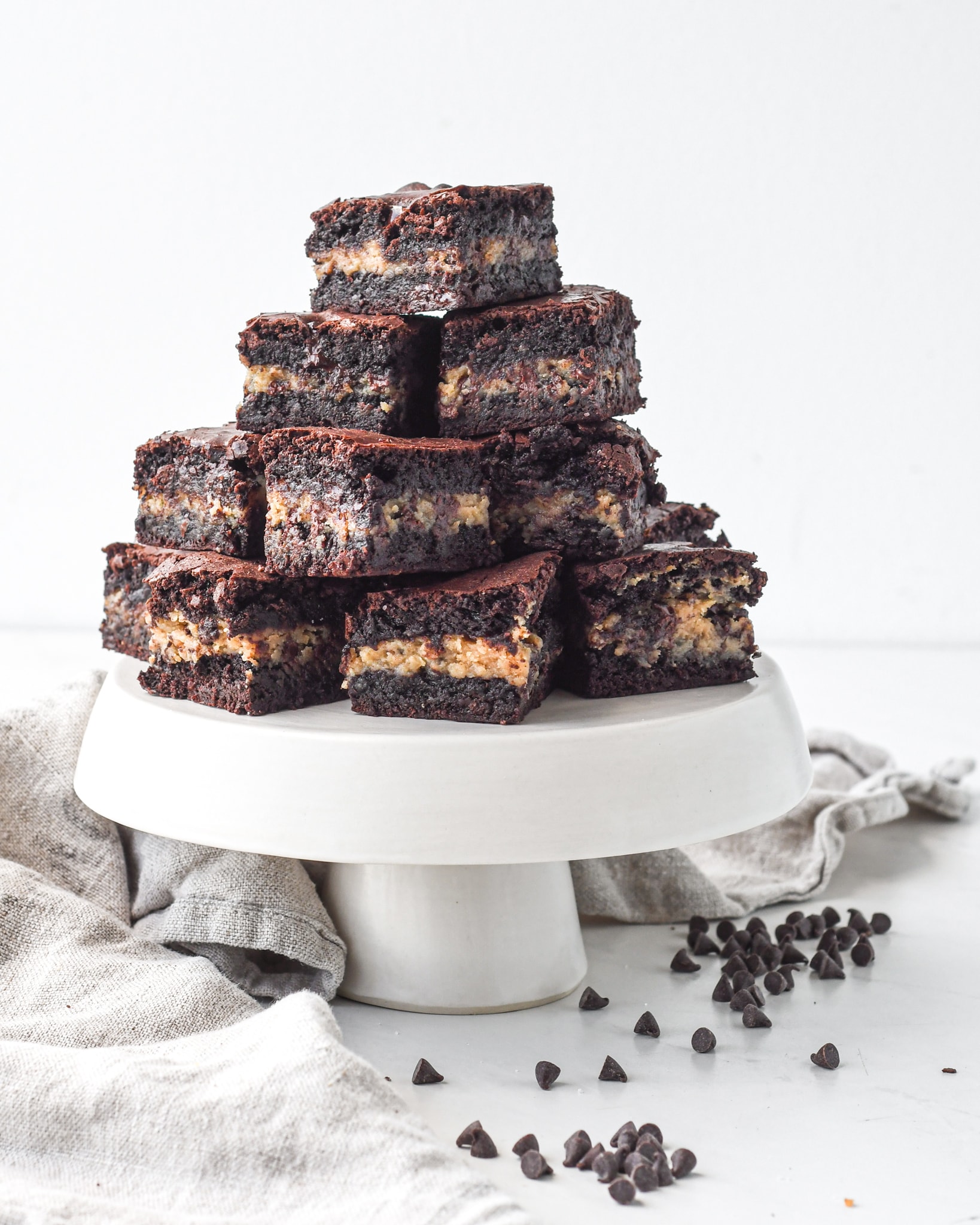 Chocolate: use a good quality eating chocolate that is about 70% cocoa solids. Don’t use a baking bar; they are never as good.

Cocoa: Dutch cocoa is the reason these brownies are dark, rich and deeply chocolatey. I like Guittard, and Rodelle. I have also used Saco Pantry’s blend of natural and dutch to make these brownies and loved it too. Avoid natural cocoa and black cocoa here as the resulting taste will be different.

Brown Sugar: For the cookie dough and you can use dark or light; don’t substitute with granulated as it doesn’t have the same caramely ccc taste or add enough moisture.

Chocolate Chips: Mini, but get a good quality! Mini because the regular sized ones are quite chunky in a bar and you’d miss the dough but if you can only find regular go for it. I normally say chop up a chocolate bar but you want the bits of chocolate to stay intact after baking (for looks and texture) and chip is the only way to do this.

(below: a few more photos of early attempts where the dough had too much moisture and bubbled around. Will not lie: the batch was delicious even if it wasn’t gooey!) 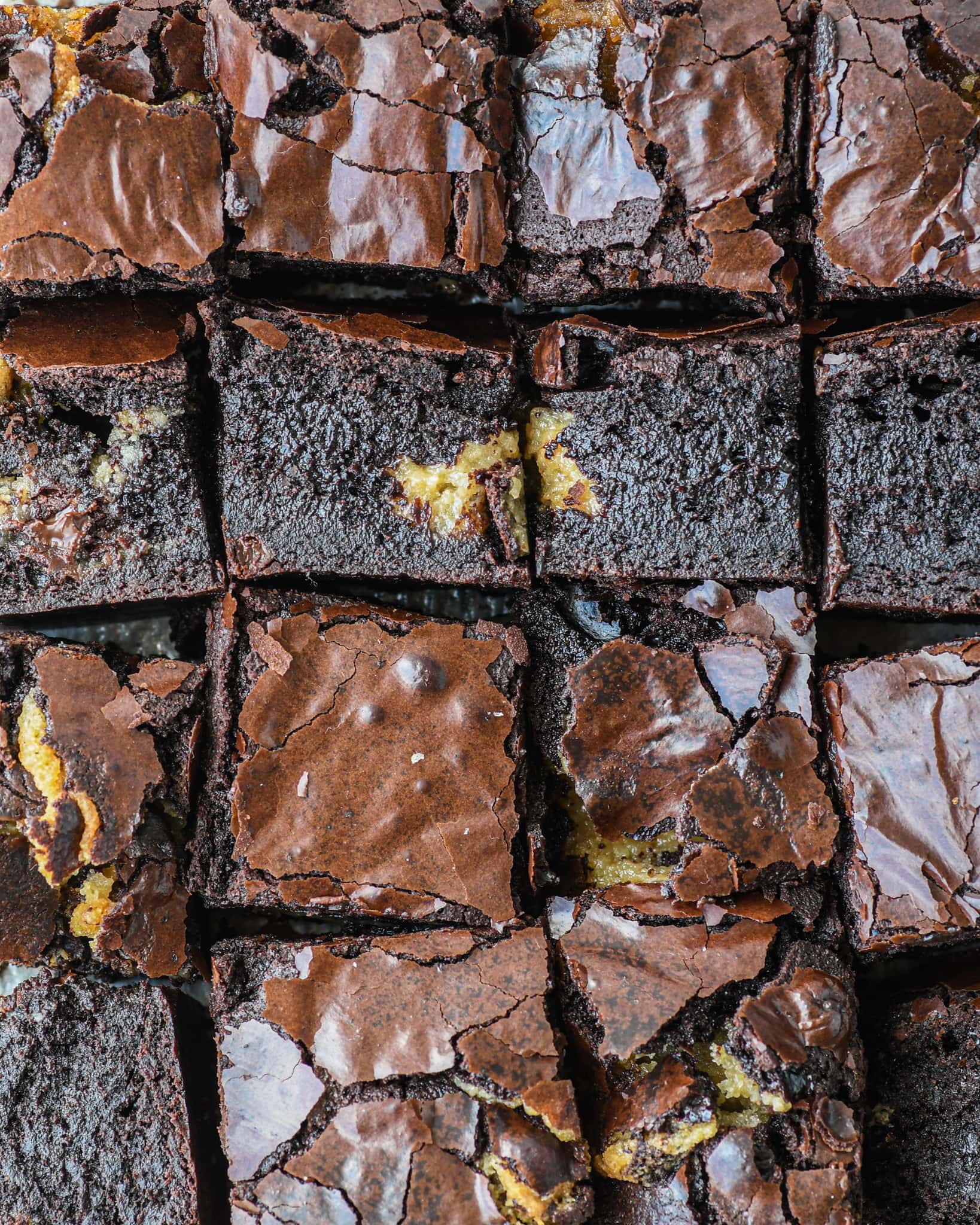 Update 6/2021: The recipe has been scaled down and now makes enough to fit a square 8×8 or 9×9 inch pan. Hopefully this will help with the issue of under-doneness some readers are having.

Our beloved brownies are now stuffed with cookie dough! A cookie dough layer that stays soft and ‘dough’ like is baked into the center of the very best, thick fudgy brownies. 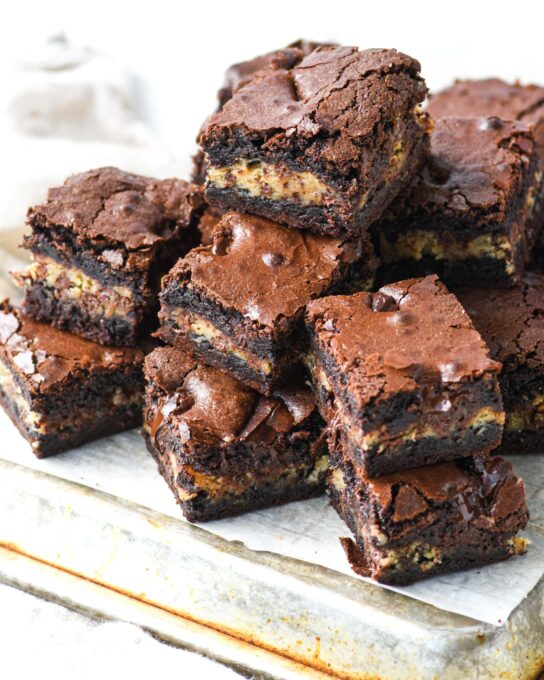 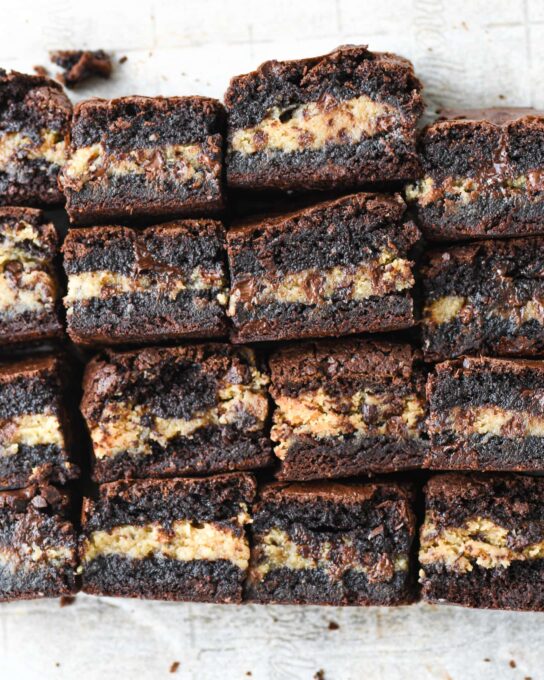