Brownie blondies that are so much more: oreos, chocolate chips and peanut butter cups interspersed between a fudgy rich brownie layer on the bottom and a chewy, butterscotch blondie layer on top. 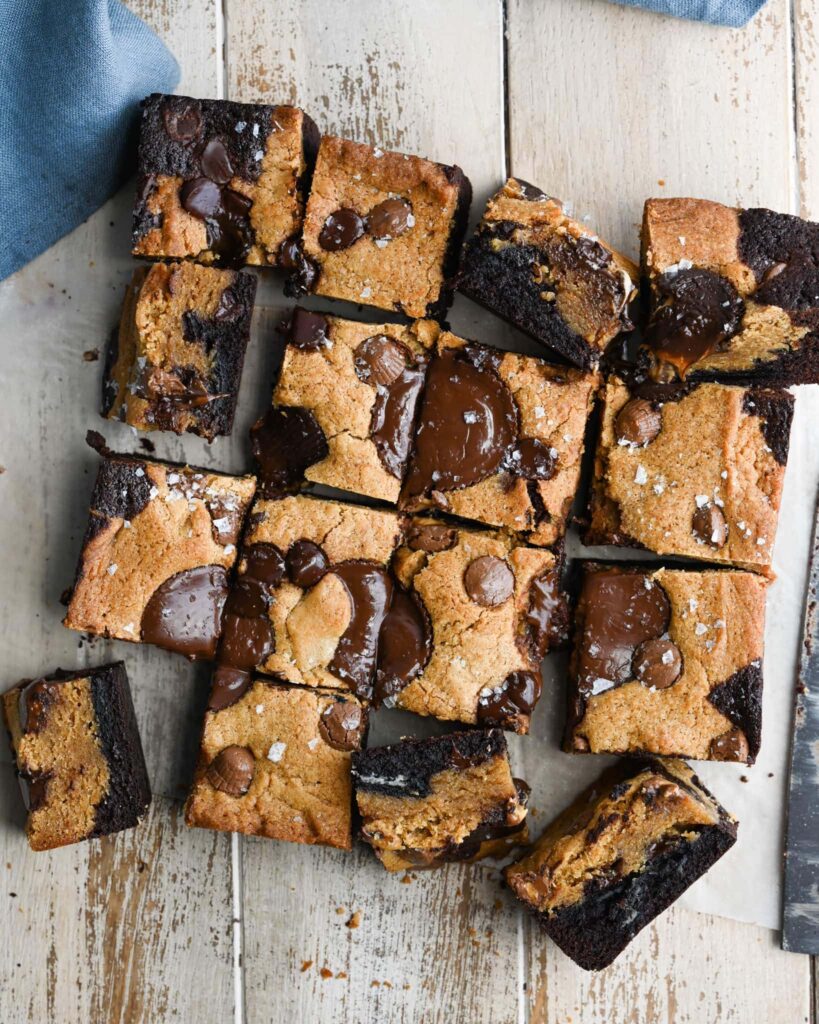 Brownie blondies that are so much more: oreos, chocolate chips and peanut butter cups interspersed between a fudgy rich brownie layer on the bottom and a chewy, butterscotch blondie layer on top.

Every once in awhile I feel like baking something multi-layered and really, totally ridiculous; like stuffing an oreo between two different kinds of cookie doughs or making a birthday cake ice cream that has bits of cookie dough and cake in it. An over-the-top dish like these gooey rainbow layered bars, because I usually have everything on hand and think this could be good, very good. Usually I’m right… (except for one time when it was a choc cake with caramel and a meringue and that was just TOO much, lol).

I had seen a tiktok of a 7 layer brownie, recently, I can’t remember what was in the layers but the song, Iko Iko that played in the background, stuck with me. After a week of listening to it on repeat, I hatched a plan to make these.

And damn it, it was so easy! I made both batters at the same time, with a few adjustments to my basic brownie and blondie recipes… they were ready to go into the oven in less than twenty minutes. The hardest part was waiting for them to cool so I could slice in (with that much chocolate in there I didn’t want a mess on my hands). And listen, they’re good – like really good. Let’s do this. 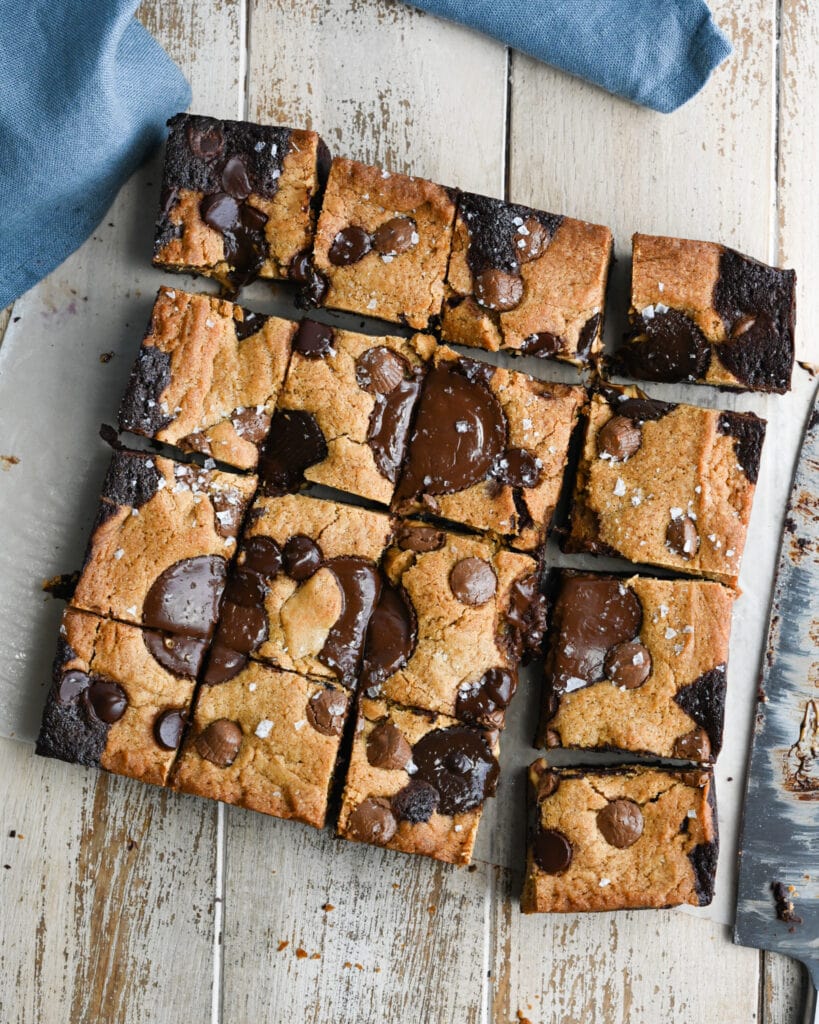 Butter: Unsalted and cold as it will be melted. You can use dairy-free butter here too.

Brown sugar: Blondies always have brown sugar whereas brownies do not – however, I use the brown sugar in both batters here, to make it easier and to keep the bottom layer a little soft since it will cook for awhile.

Eggs: This recipe cannot be made egg free.

Cocoa: Dutch process cocoa makes for a rich brownie taste, don’t use natural or the ‘chocolate’ taste won’t come through as well.

Flour: All-purpose flour. If using measuring cups, shake the flour over the measuring cup to fill then scrape the top to level it. If you need to make these gluten-free use a 1-to-1 flour substitute (I also think oat flour works well here).

Oreos: I used oreo thins but any kind of oreo will do.

Chocolate Chips: Use dark chocolate chips, there’s a lot of ‘sweet’ in this layered bar so breaking that up with dark chocolate helps and makes for a richer taste.

Peanut butter cups: You can set these in whole or you can chop them up, they’ll just be sprinkled over the top layer before baking. 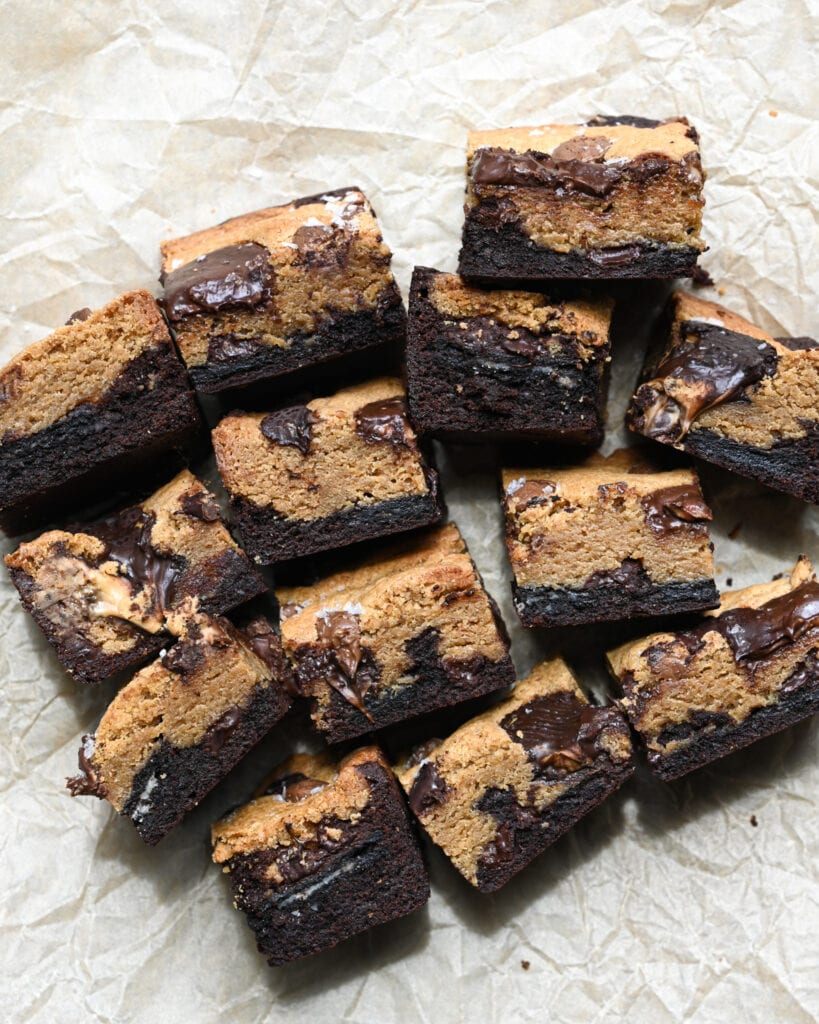 Layer the batter and fillings for Brownie Blondies:

How much chocolate should I add to the middle layer? And how many peanut butter cups on top?

For the chocolate chips, about two handfuls; you don’t want to cover every cm of the brownie batter with them but have it mostly covered. For the peanut butter cups, just enough so that every bar will have a good amount.

What kind of chocolate should I use?

How will I know when the bars are done baking?

The center will puff up. If you’d prefer to use a cake tester,note that the tester will come up with at least a little ‘goo’ on it, but it should be thick, not runny.  Also note, if using a 9×9” square pan the bars will take a little less long to bake.

What else can I use besides peanut butter cups?

Something salty here is really, really welcome so if you’ve got a peanut allergy try an almond or cashew butter cup. Alternatively, pretzels could work although you might want to add a bit more chocolate to the top as well. 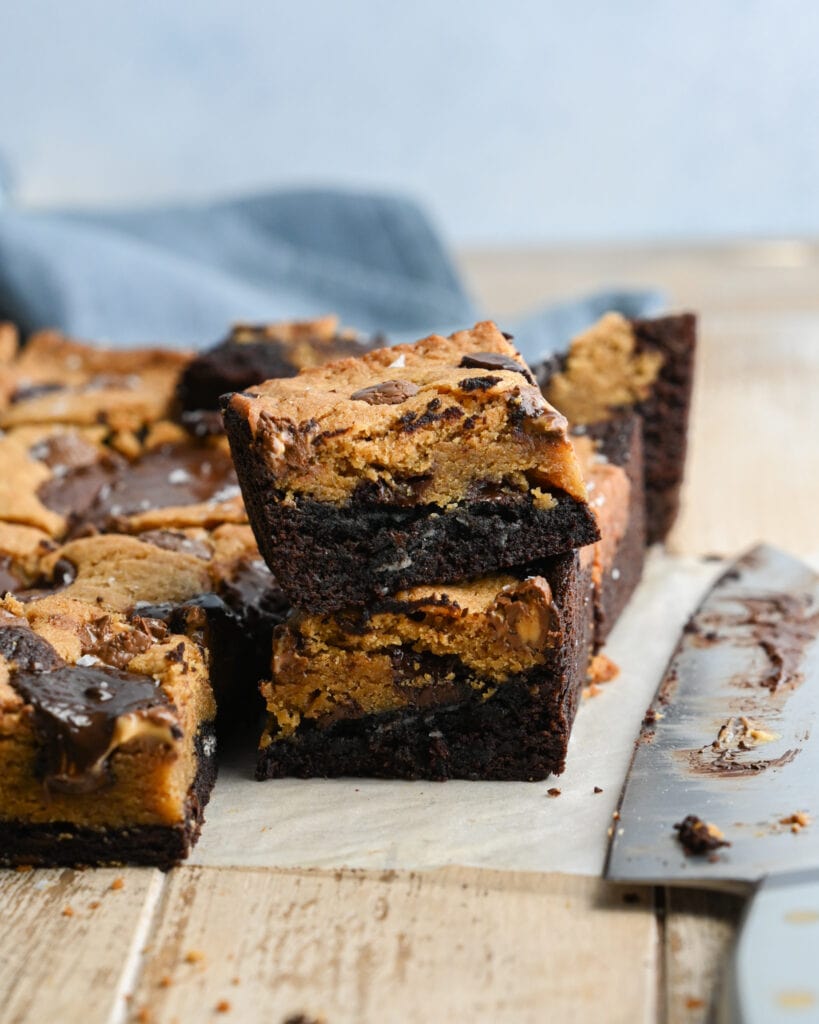 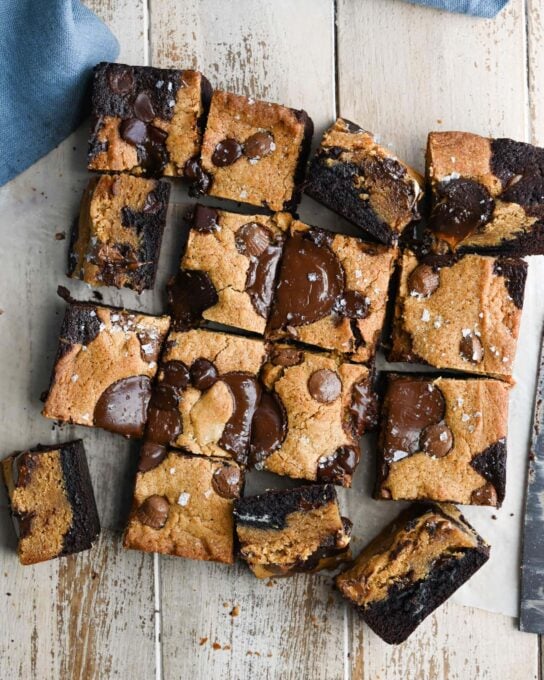 For the Brownie Layer

For the Blondie Layer