Homemade marshmallows swirled with dark chocolate; the mallow base is made with brown sugar and honey which results in a super flavorful but not overly sweet taste. These will take your hot cocoa drinks or your s’mores to a whole other level! 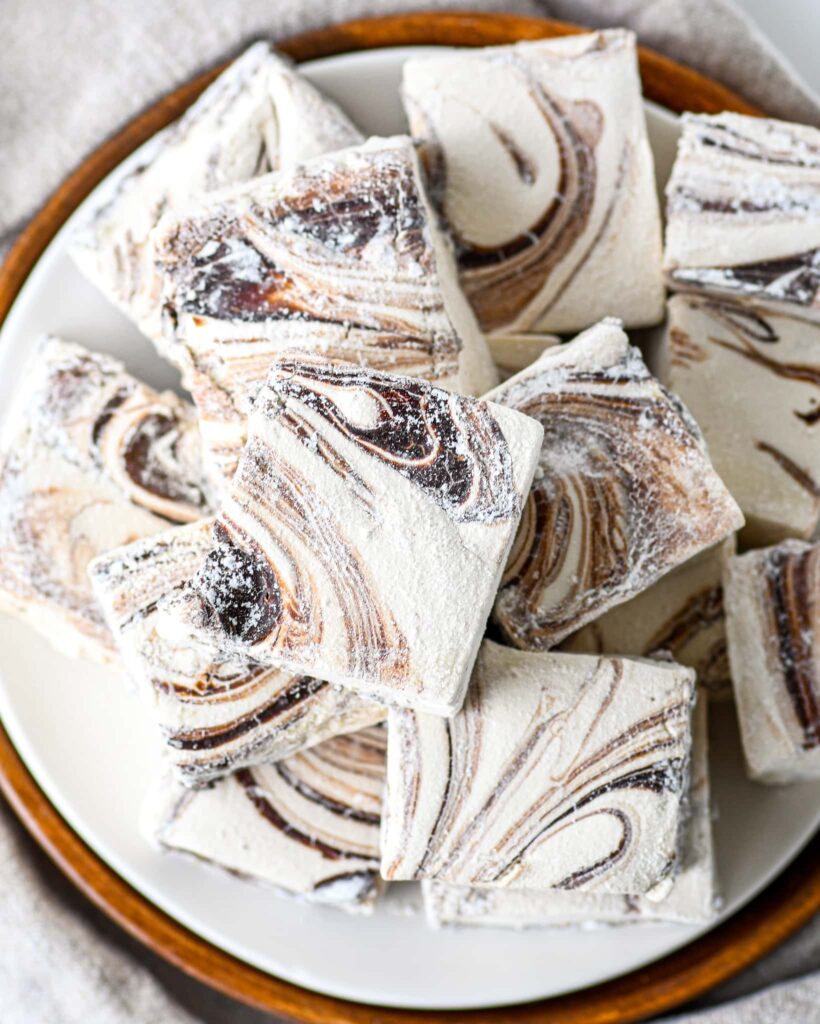 Homemade marshmallows swirled with dark chocolate; the mallow base is made with brown sugar and honey which results in a super flavorful but not overly sweet taste. 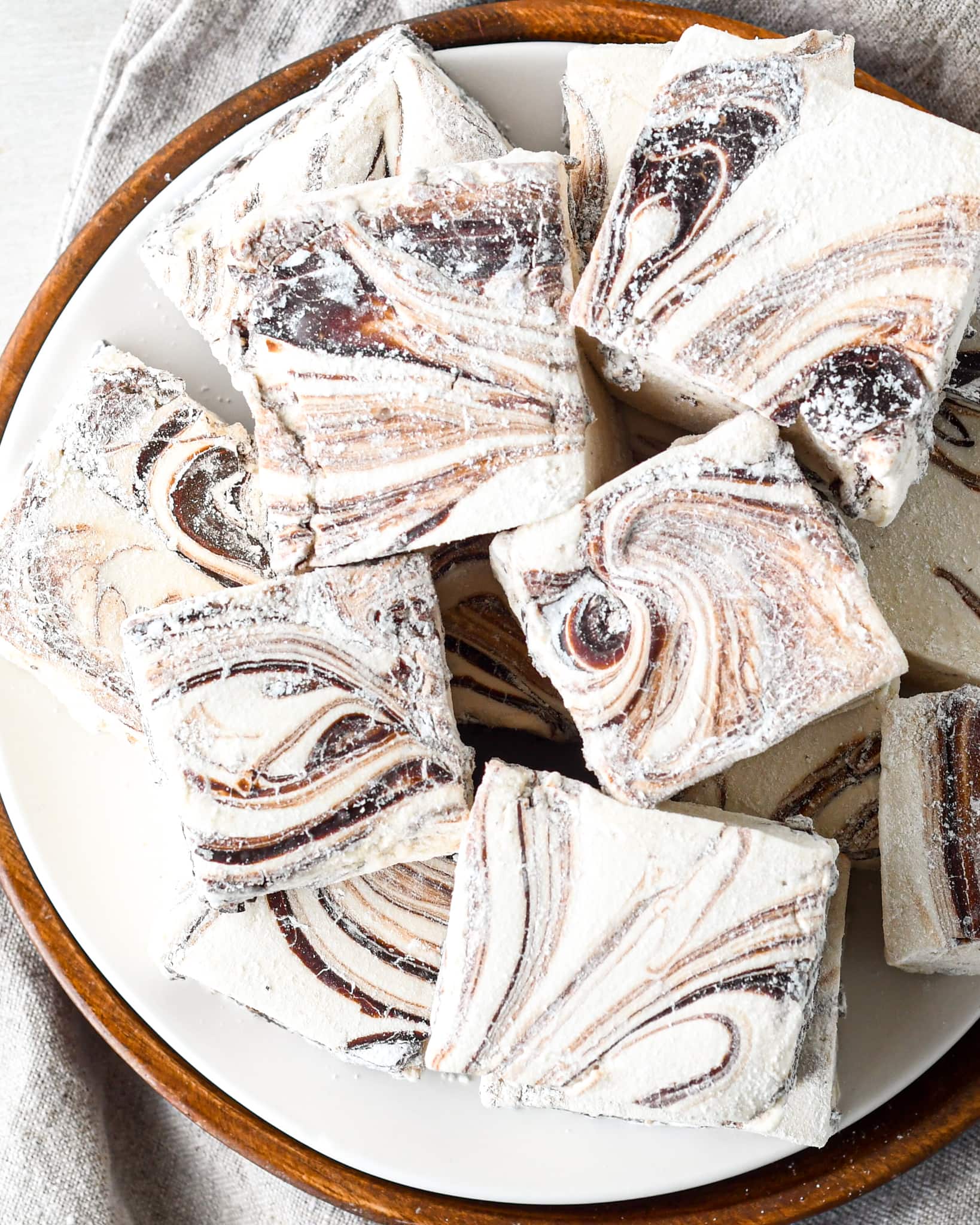 Last winter I swear I made a hundred chocolate marshmallows and, every attempt was a fail. Both the cocoa and melted chocolate, when mixed fully into the fluff, would weigh down the marshmallows and make them dense. I was losing the perfectly light and fluffy texture that was so special about homemade marshmallows. So I gave up mixing fully and swirled in some melted chocolate in like I did with these peanut butter caramel mallows and it worked like a charm! You get the taste of chocolate and a snappy texture too, within the pillow soft mallow.

But, I know what you are going to say now, why should I go through the effort of making marshmallows when I can buy them for literally $2?! You already know I’m going to tell you they taste better homemade but let’s talk about why. We won’t need as much sugar and the ingredients we use will be directed at taste rather than storage. No corn syrup and no cornstarch! We’ll use the best vanilla and very good chocolate. Bonus, you can cut them into whatever shape you like! I like mine in huge cubes, as you can see, lol. 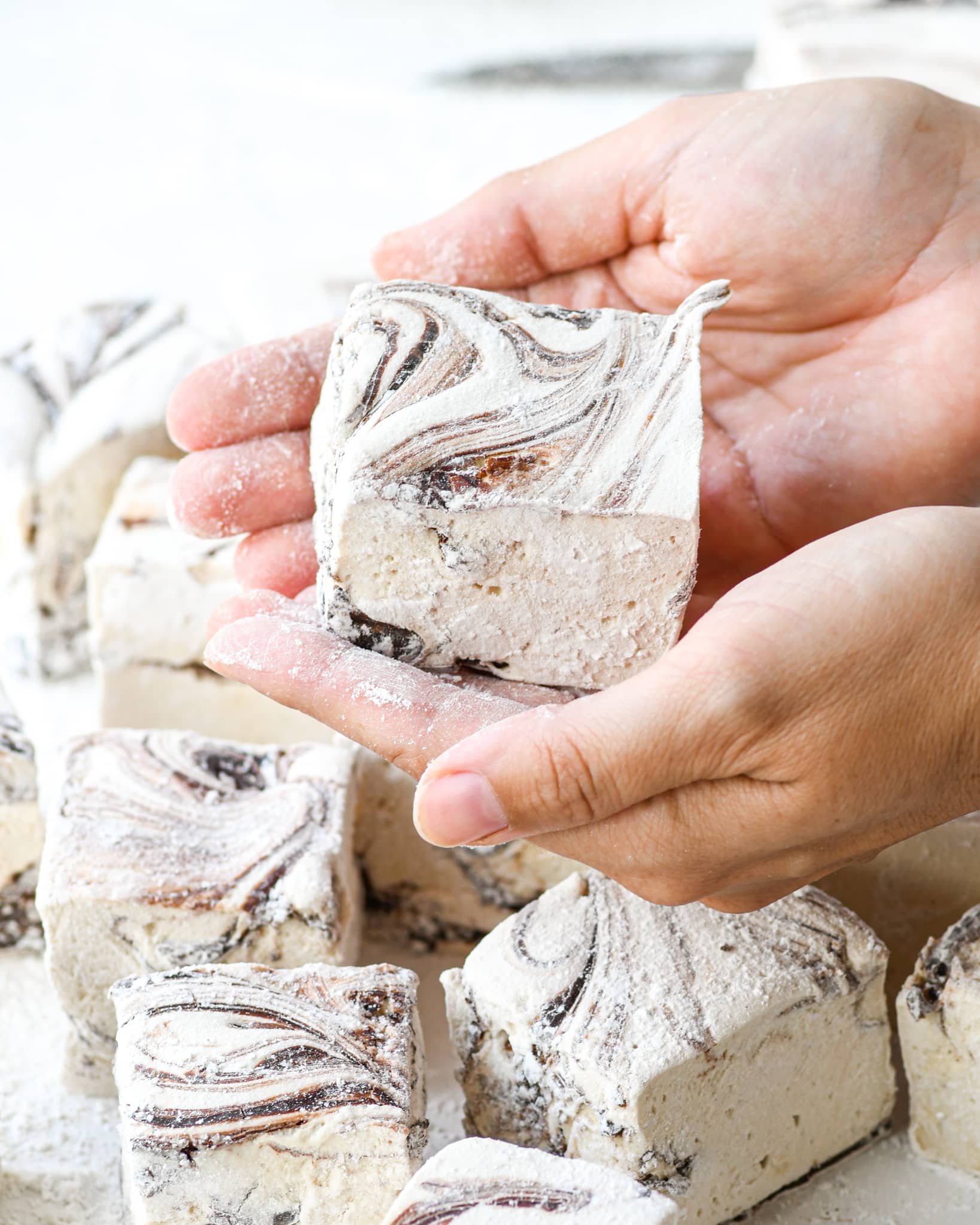 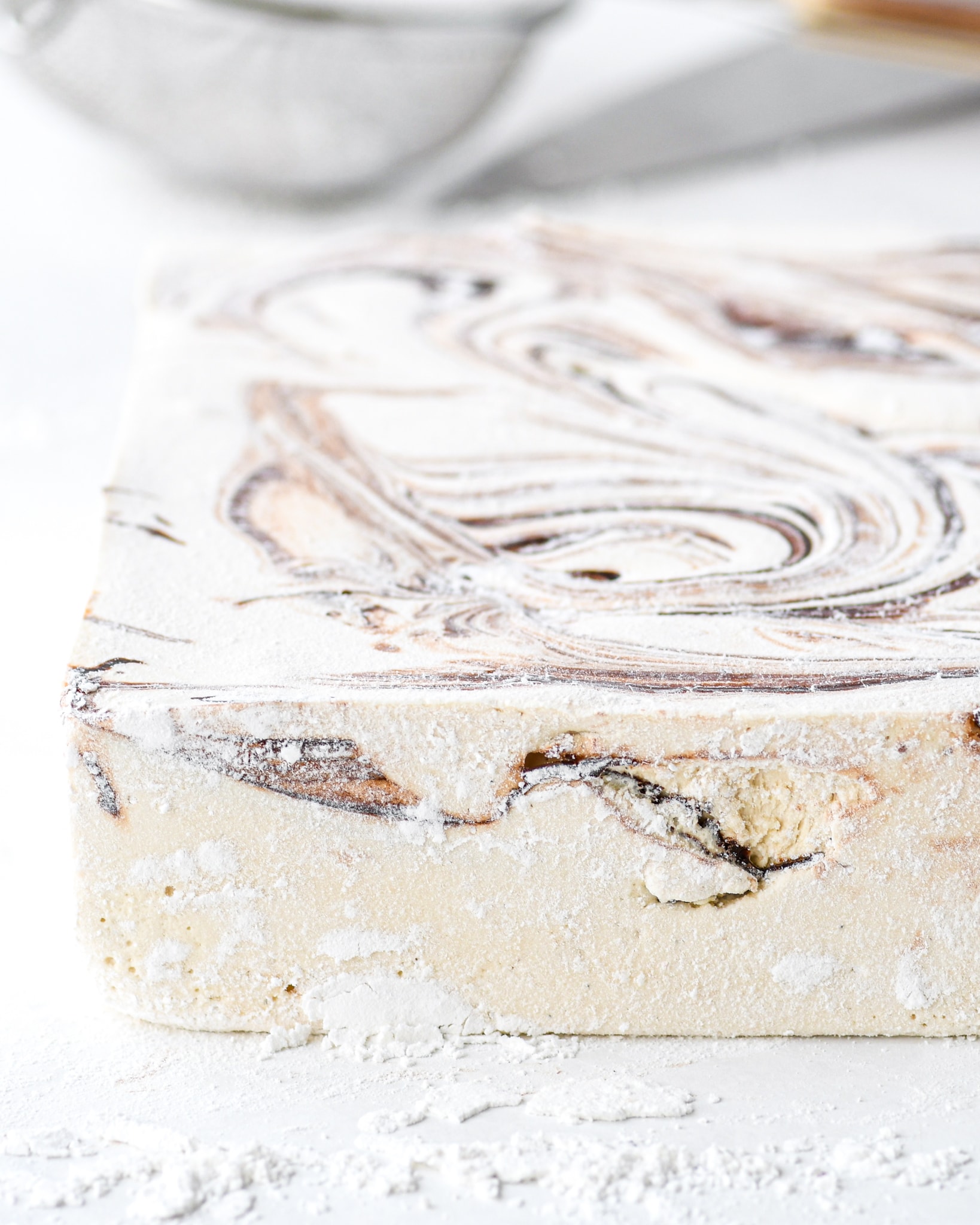 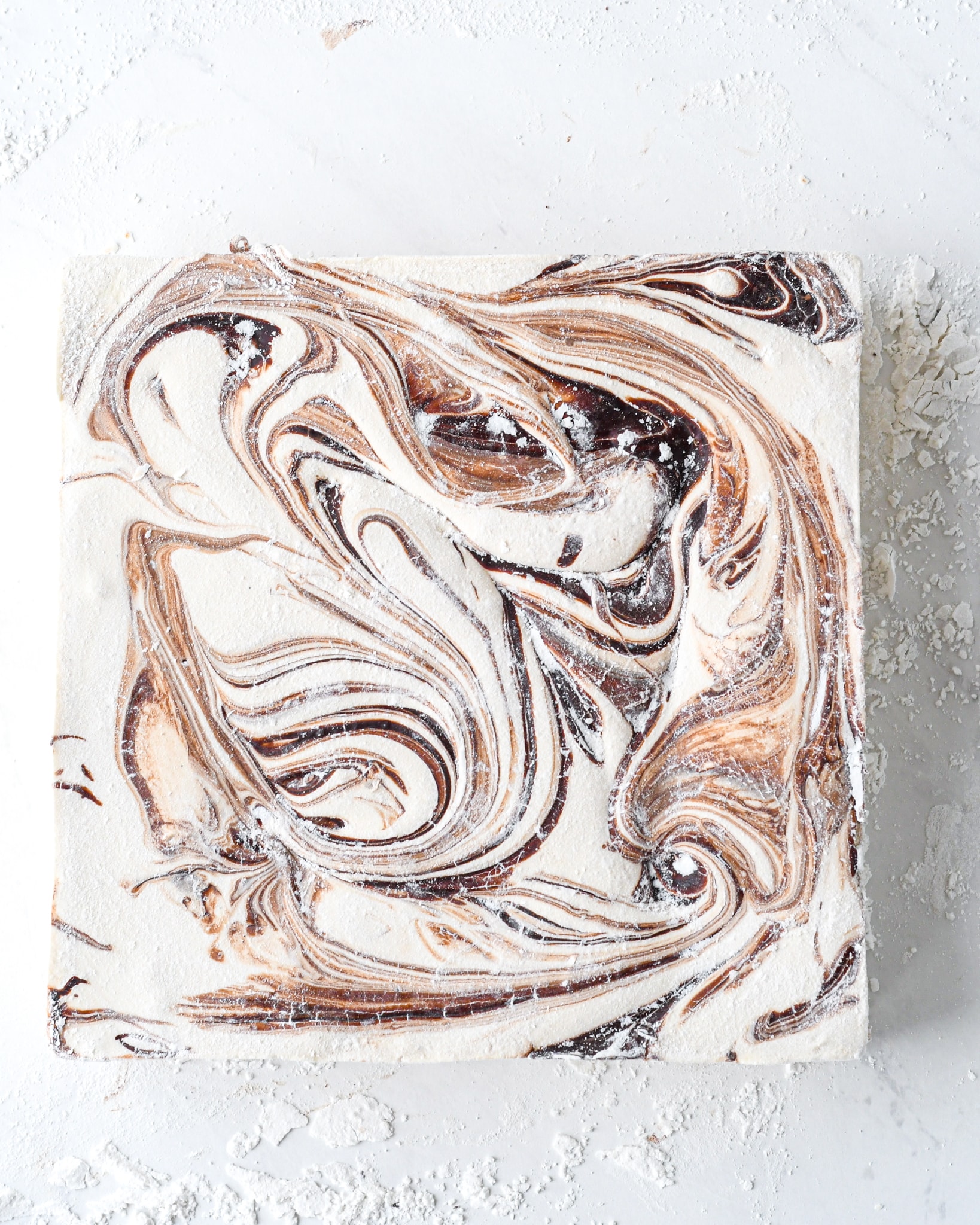 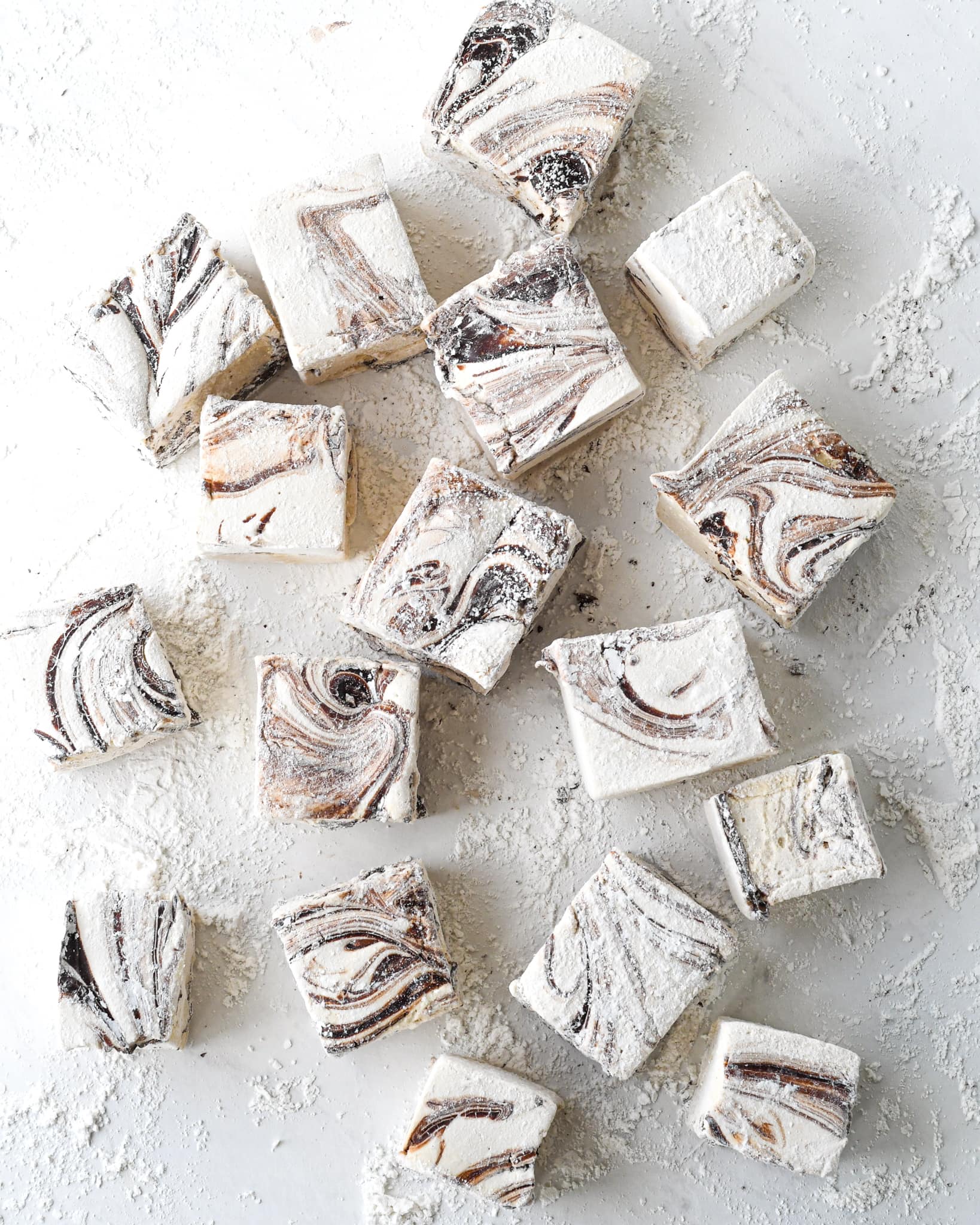 What makes this brown sugar marshmallow recipe so special?

This is a (very heavily) adapted recipe from Stella Parks’ vanilla marshmallows, from her book BraveTart. I kept most of the measurements the same as hers, but omit the butter, swap granulated sugar for brown and corn syrup for honey. And I change the method. Also, chocolate – always chocolate.

My mallows are unabashedly unconcerned with looks. While most recipes lend you a perfectly white mallow, these are made with brown sugar and honey, speckled with vanilla bean, and swirled with a dark, dark chocolate. They want to be delicious, not pretty. The dark chocolate interrupts the soft mallow, but in the most pleasurable way only a chocolate can. The dark chocolate and the use of organic  powdered sugar also keeps the cloying sweetness at bay. 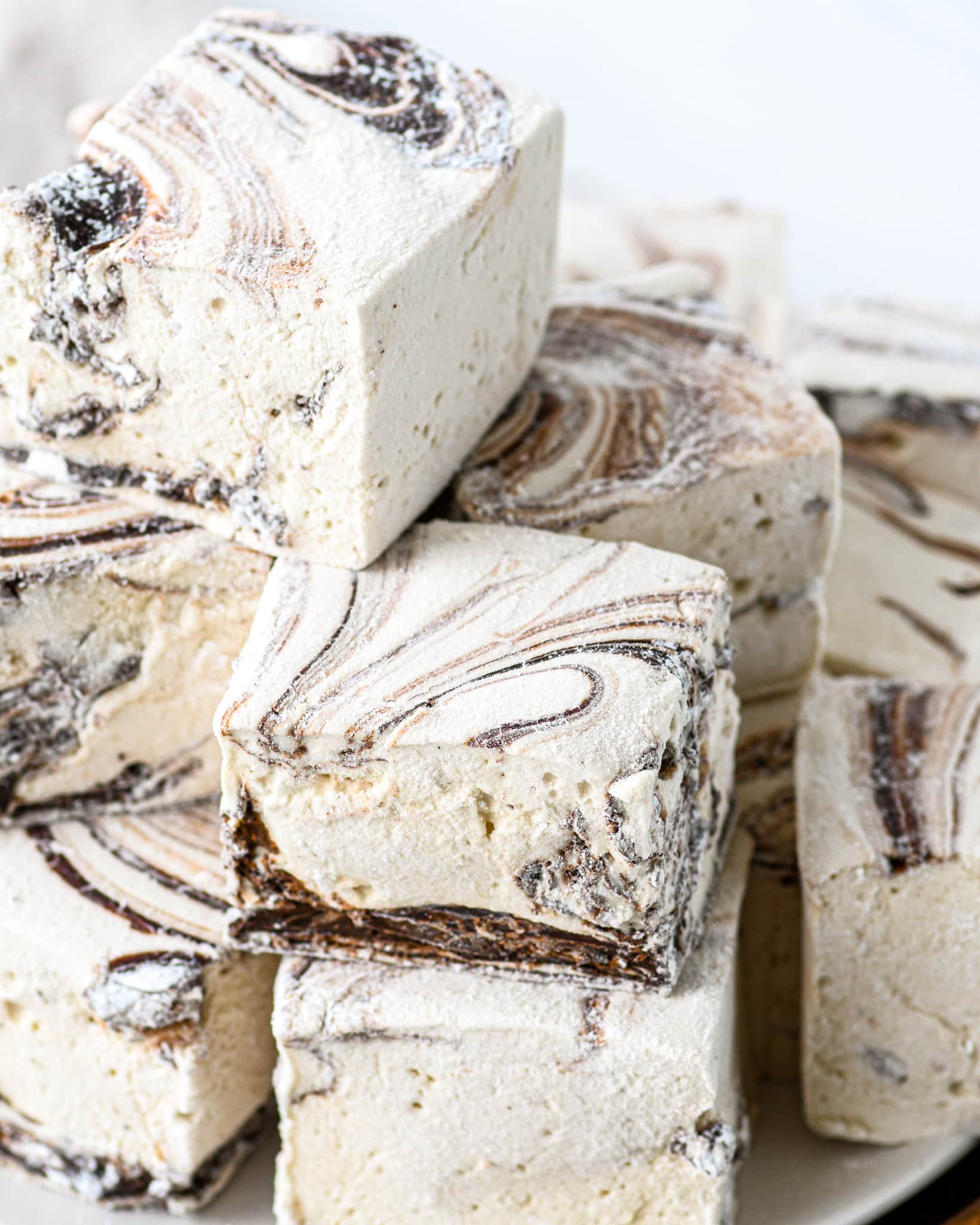 How to make Brown Sugar Marshmallows 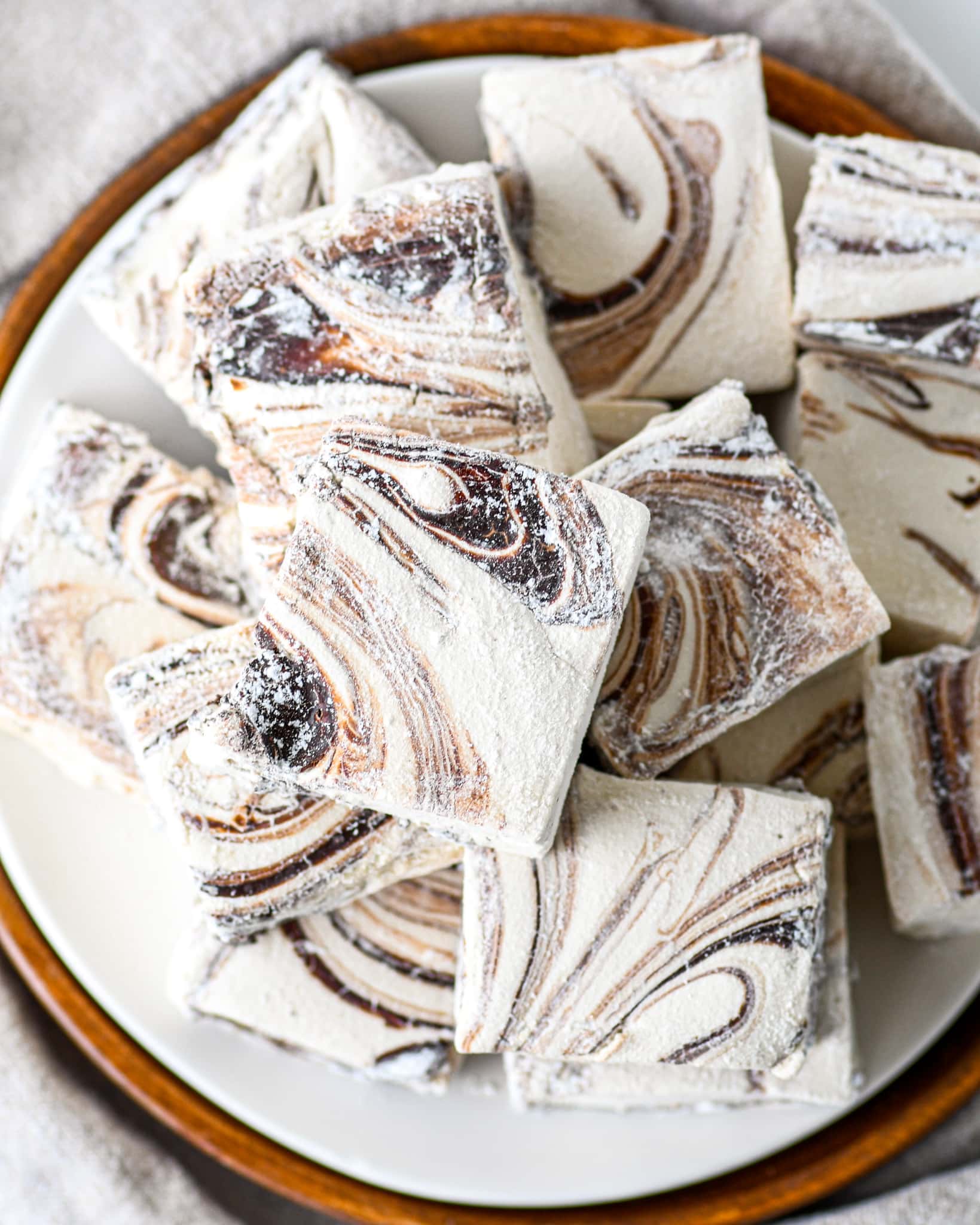 Deep pot: Because we use honey in this recipe, the sugar mixture boils up. If you are halving the recipe, a regular pot could do, but if you are doing the full, use your biggest deepest pot!

Digital or Candy thermometer: This one is non-negotiable. You need the thermometer to know when exactly the sugar hits 250. I have a digital and a candy but because I hate cleaning the candy one, I usually stay close and use my digital thermometer. A laser thermometer won’t work as well here because it only takes the temperature of the surface.

Stand mixer: You could do this with a hand mixer, but it will take a lot longer and be quite a fight. 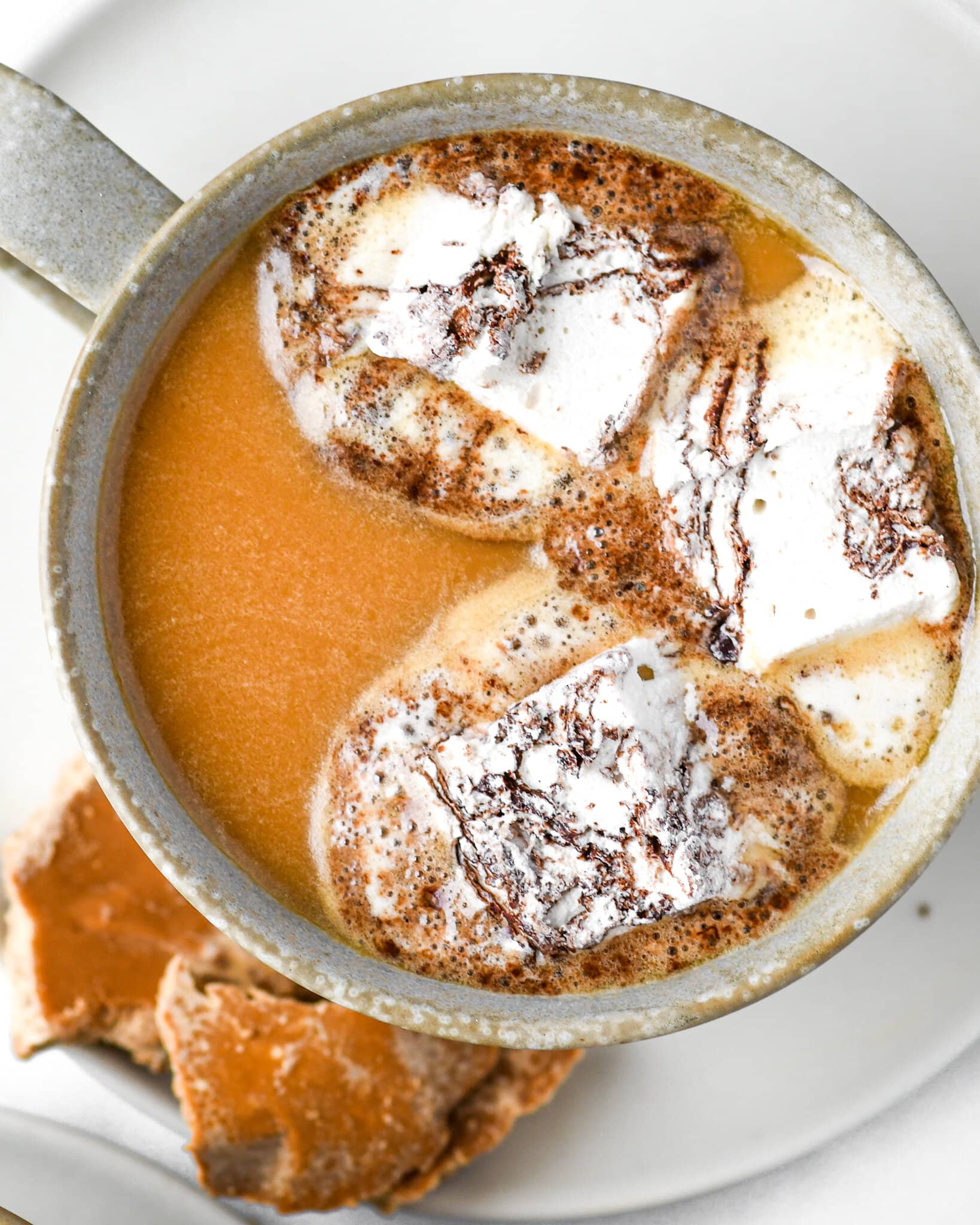 Gelatin: For one large batch, you’ll need four packets of gelatin – exactly what comes in those little boxes of Knox Gelatin. These are readily available in the baking isle of most grocery stores in the US. No subs for this, sorry!

Vanilla: Use the good stuff here. In order to overpower the gelatin flavor we want to lend very good vanilla flavor to the base. The form of vanilla you use will make a difference in quantity: extract is more concentrated so you’ll need less, more if using paste. As for brands: Nielsen Massey makes wonderful vanilla extract, as does Rodelle Vanilla.  To get the lovely bean speckle in the white mallow you can use vanilla paste (I’ve also heard good things about Heilala Vanilla) or even scrape the inside of a bean.

Honey: I use honey because I really dislike the taste of corn syrup and I just don’t keep it in my kitchen. Chose a floral honey with a not too strong taste that won’t come through in the final mallow.

Brown Sugar: Light or brown is fine. When you buy, make sure it’s fresh by squeezing the bag to see if it’s moist. When exposed to air, brown sugar gets hard and dry so keep it airtight. You could use regular granulated but you’ll lose the added caramel notes brown lends.

Chocolate: This is your biggest contrast to the sweet marshmallow so I’m going to make a case for dark chocolate. I really love the pound plus bars Trader Joe’s sells, they are about 72% dark cocoa solids. I also love Lindt’s 70% dark, readily available at most grocery stores or buy in bulk here.

Butter: You’ll only need just a bit and it goes in at the very end of whipping. I got this tip from Stella Park’s whose marshmallow recipe I based my recipe on.

Powdered sugar: Definitely use organic and, check the package! Is it made with cornstarch or tapioca? Only get the tapioca. Cornstarch has a strange taste and needs to be heated to melt, tapioca melts on the tongue. Since we are using the powdered sugar to dust the mallows at the end, we definitely want it to melt without heat. Wholesome makes a great organic, as does Trader Joe’s. 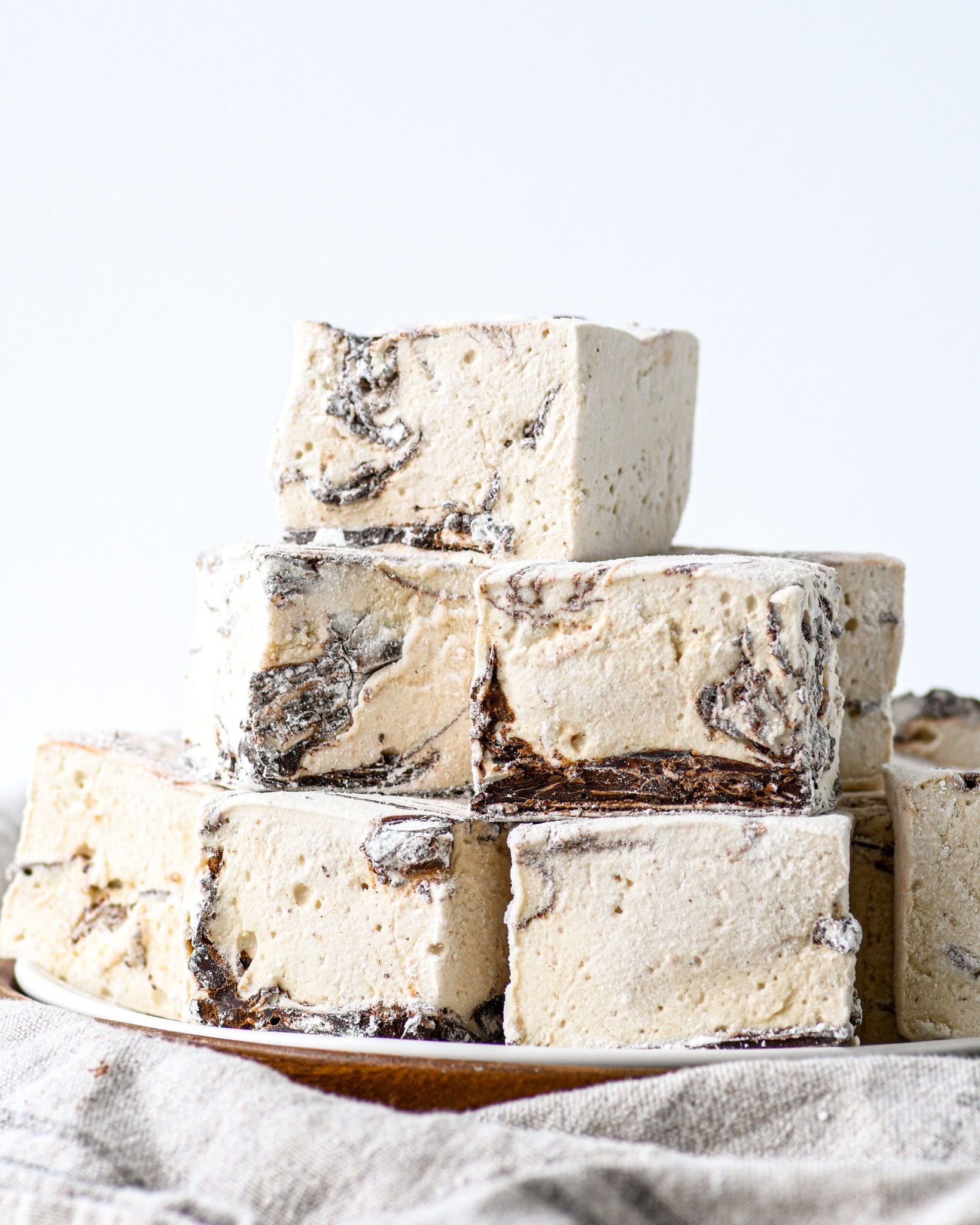 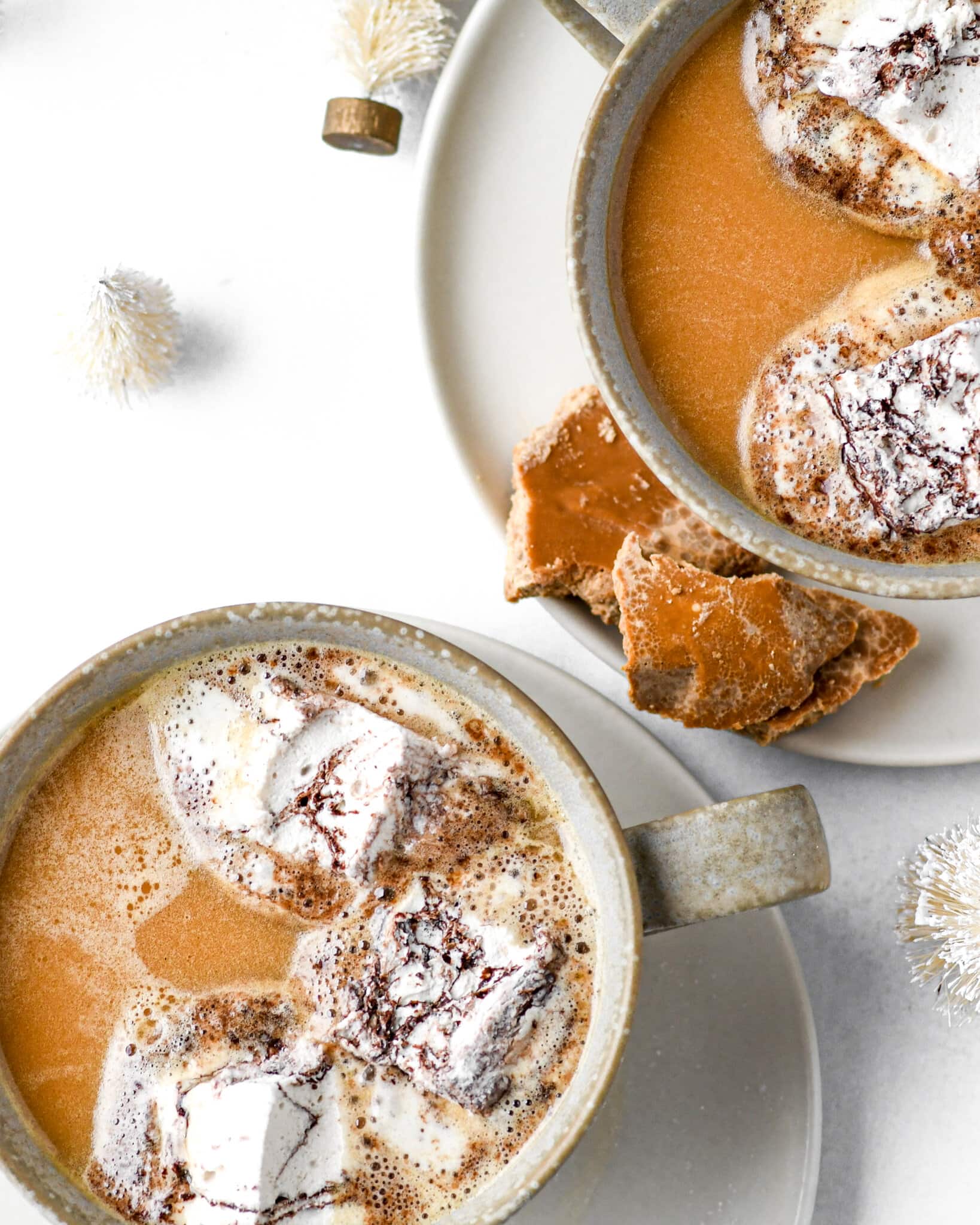 In the winter, I love pairing this with a hot cocoa that’s a little fancy. Caramelized white chocolate packs all the sugar and flavor you need so this is really just a melt-chocolate-in-milk kind of deal. It’s incredibly delicious. 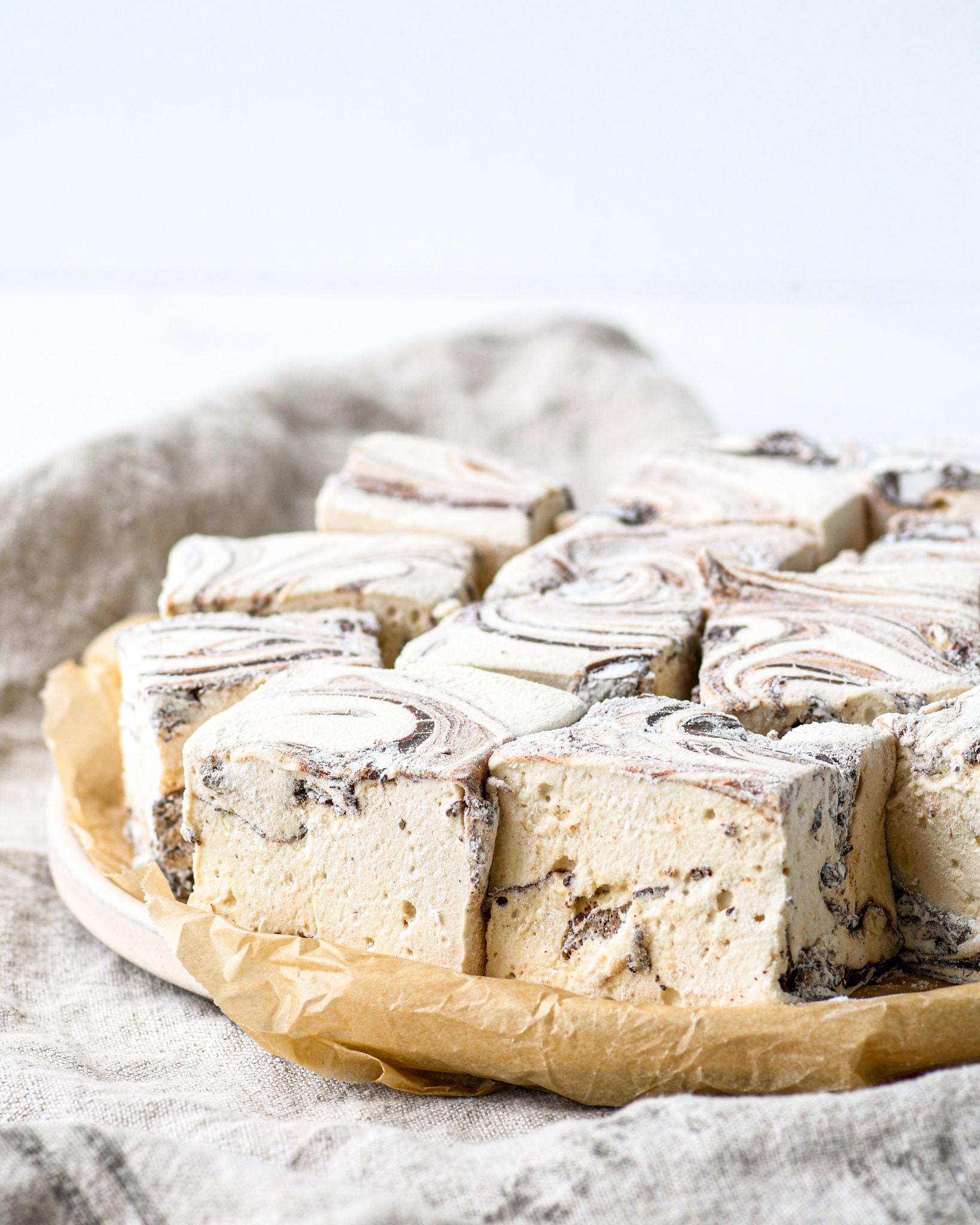 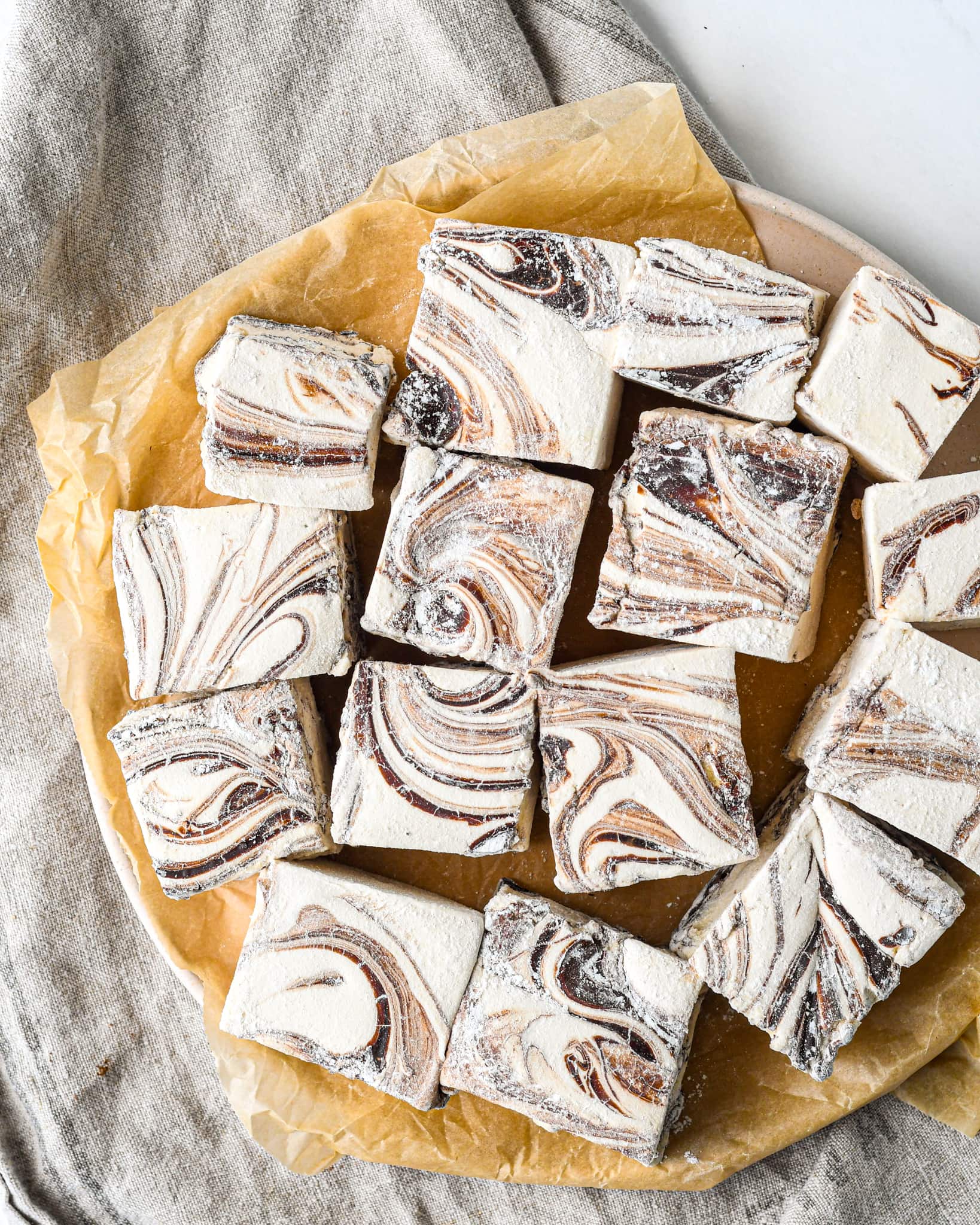 Homemade marshmallows made with honey and brown sugar, swirled with dark chocolate. 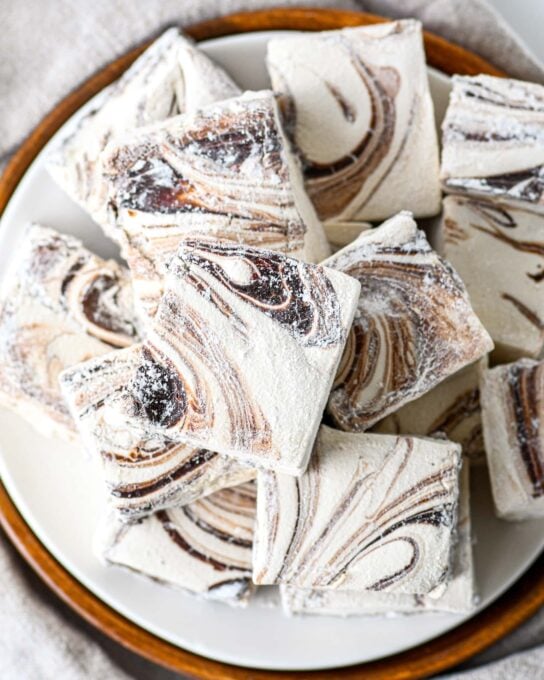