Homemade marshmallows made from fresh apple cider! No corn syrup, these are made with honey and brown sugar and are coated in cinnamon sugar. 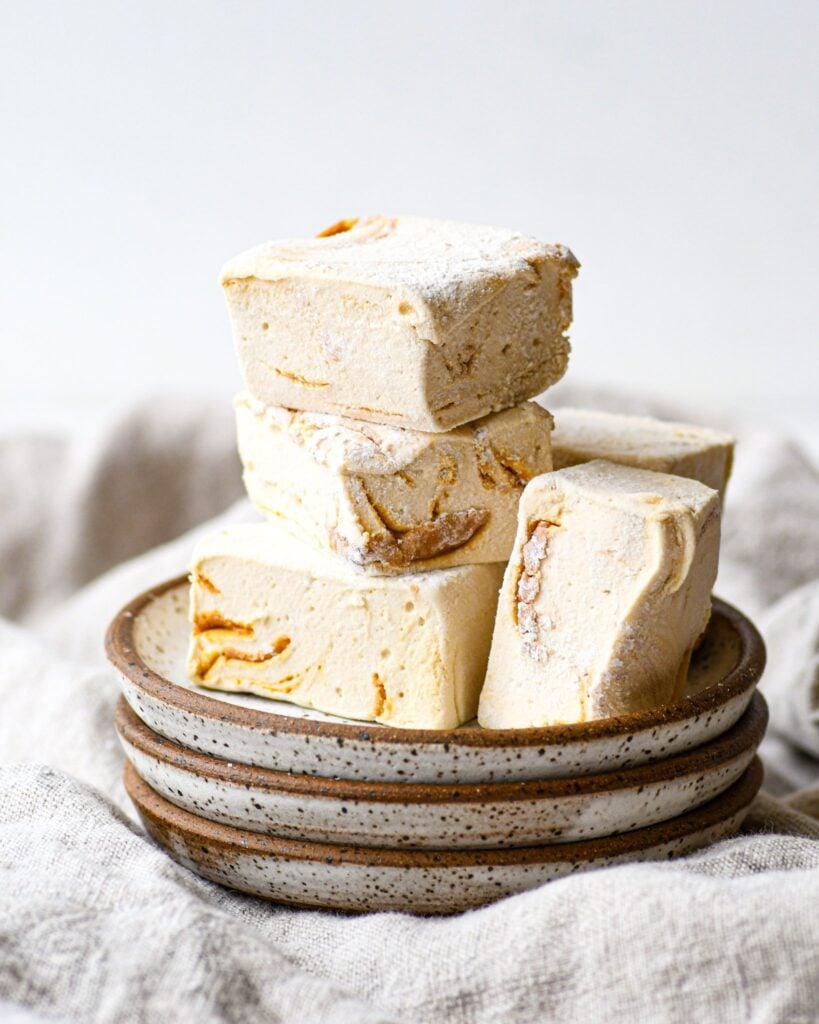 Soft, pillow like marshmallows made with fresh apple cider dusted in cinnamon sugar. Made with honey (no corn starch!) and brown sugar to add notes of caramel.  You only need a pot, a thermometer and a machine mixer to get these just right. 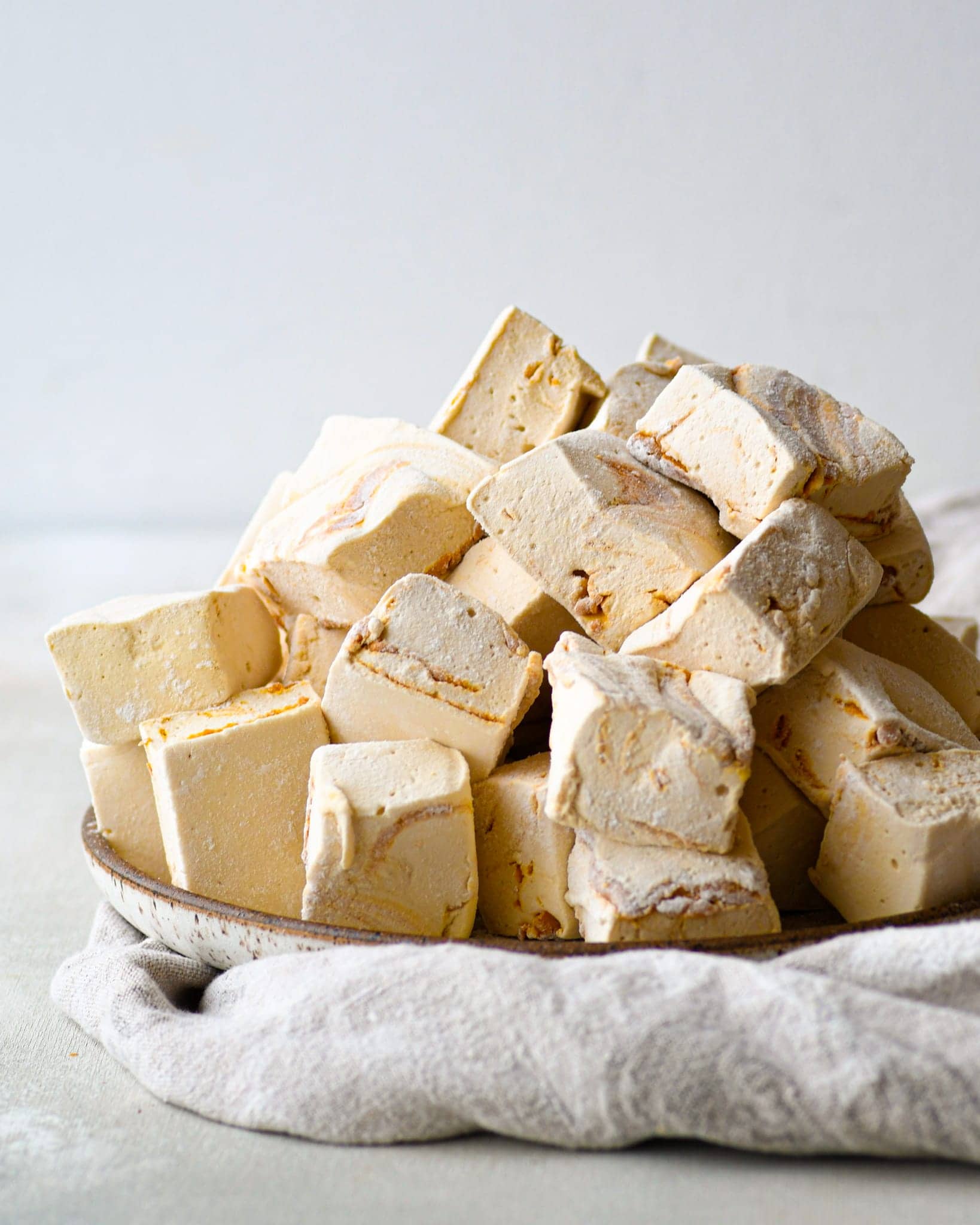 These must be the most autumny marshmallows ever; soft as the softest pillow you can imagine and can be put in hot apple cider or coffee or tea and they leave this super yummy foam on top that tastes like heaven! Or try them in hot cocoa for some extra pizzaz. Or you know, just gobble them up straight from the bag like m&ms because they are that good.

Found at most American grocery stores in all of Fall and Winter, fresh cider is essentially unfiltered apple juice. It is not the regular ‘apple juice’ which you find year round – that juice has been filtered and has pasteurized for an extra long shelf life. There are a few recipes online, like this one, which show you how to make it at home should you not have access. The best cider to get? Directly from an apple farm/orchard or a farmer’s market. 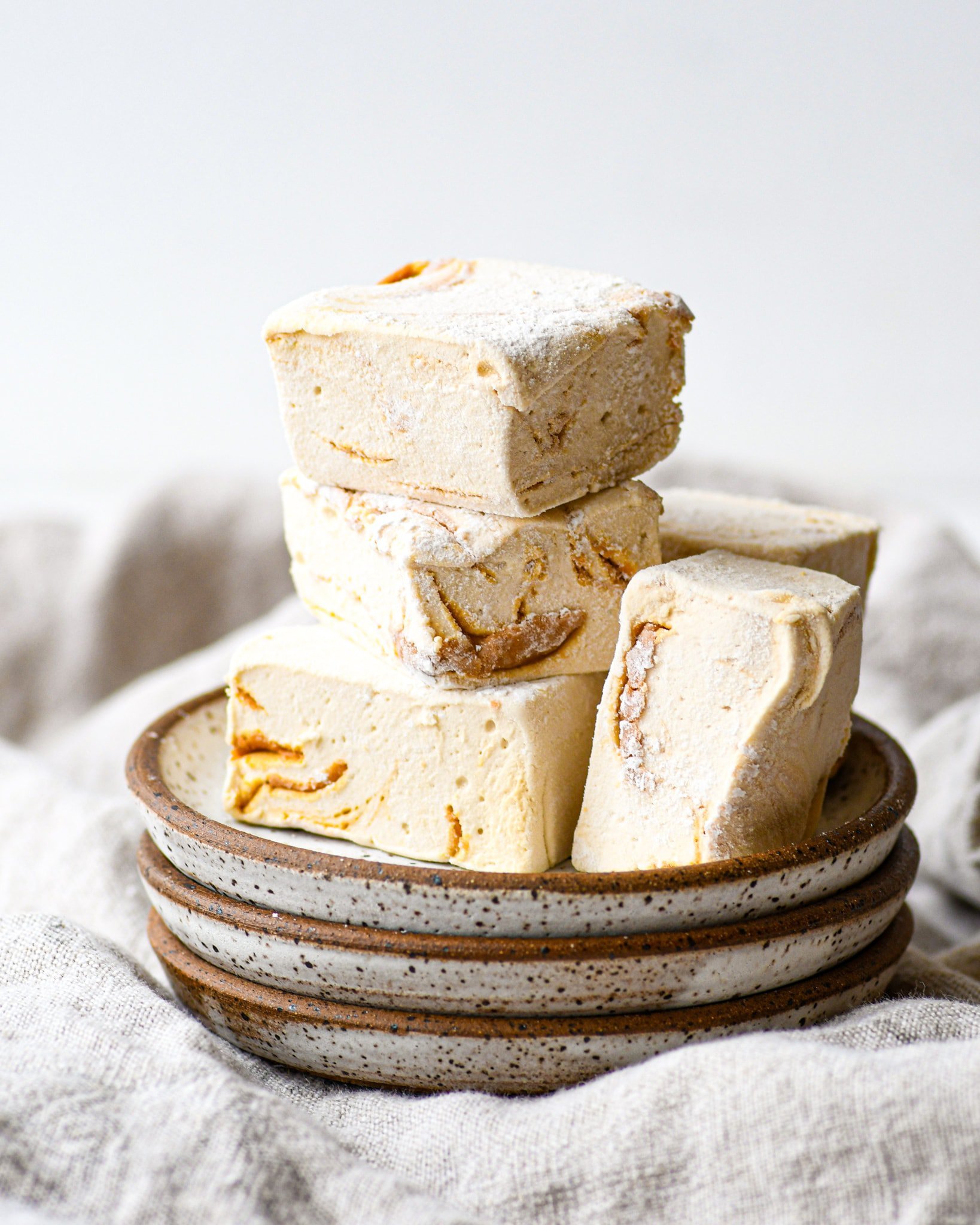 This was my first apple cider recipe on the blog (woot!) but since then I have added a bunch more, and likely many more to come. It’s wonderful as a juice (such as in cake recipes where you’d normally find orange juice or in this wonderful cider meringue) or you can boil it down into a syrup for a deeper more concentrated flavor. We won’t do that here (we’ll use the juice as is) but here are some other cider recipes you might be into: apple cider caramel ice cream, apple cider caramel shortbread cookies, and this towering apple cider cheesecake. 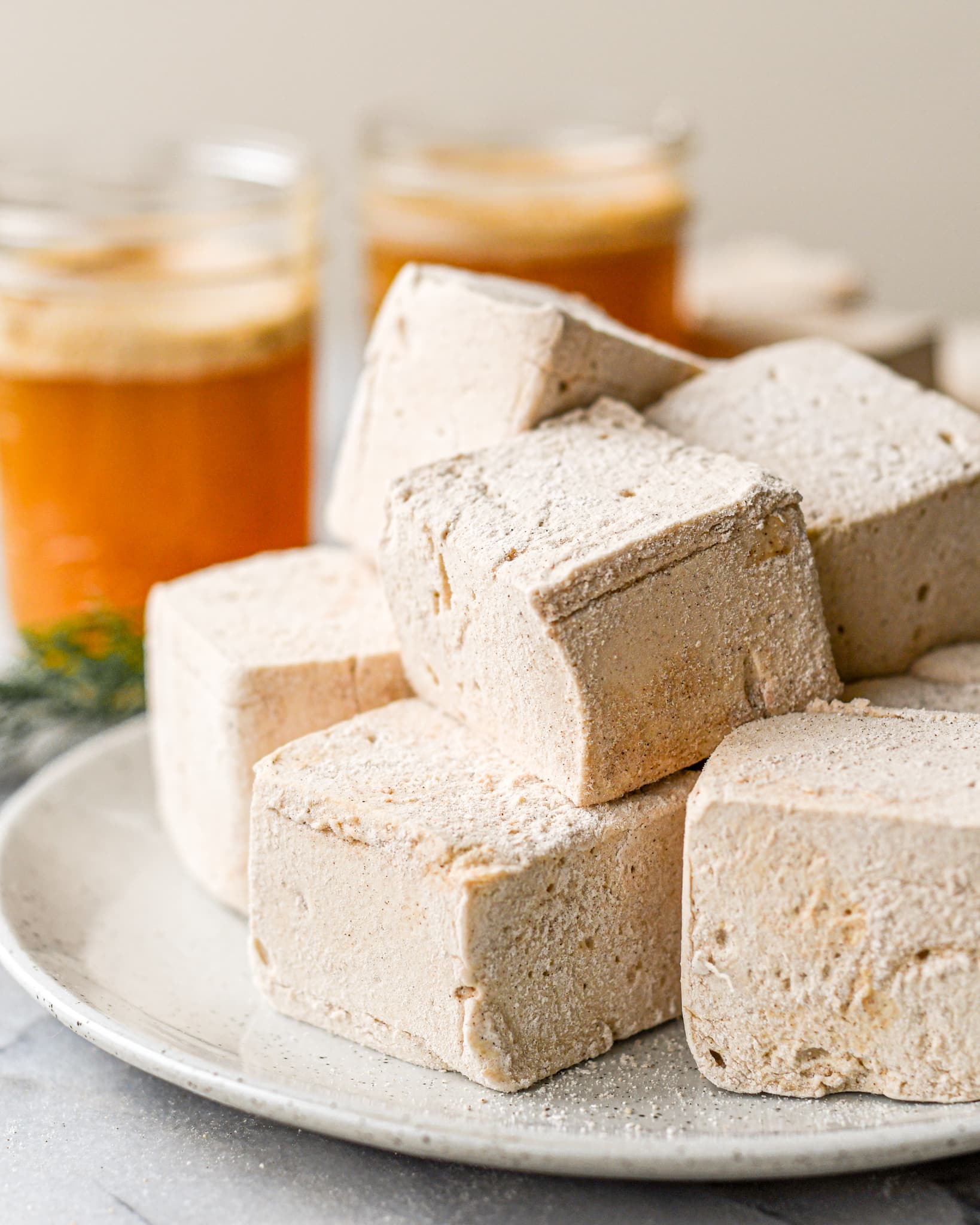 I used to be super intimidated about making anything ‘candy’ related at home. Until I realized that the only thing you need is a thermometer! And ok, a watchful eye. Here’s how to make marshmallows: boil together sugars and liquid (in our case, cider) until they reach the ‘candy’ stage, add the gelatin and whip until you have a giant meringue. The last stage is absolutely beautiful and I would likely make mallows just to get to see, feel and taste that even if they didn’t set!

Once you have reached the right stage for the fluff, you pour it into (or plop, it’s thick!) an oiled pan and smooth it out. The fluff sets into a giant marshmallow which you’ll then slice into cubes or shapes of your choice. 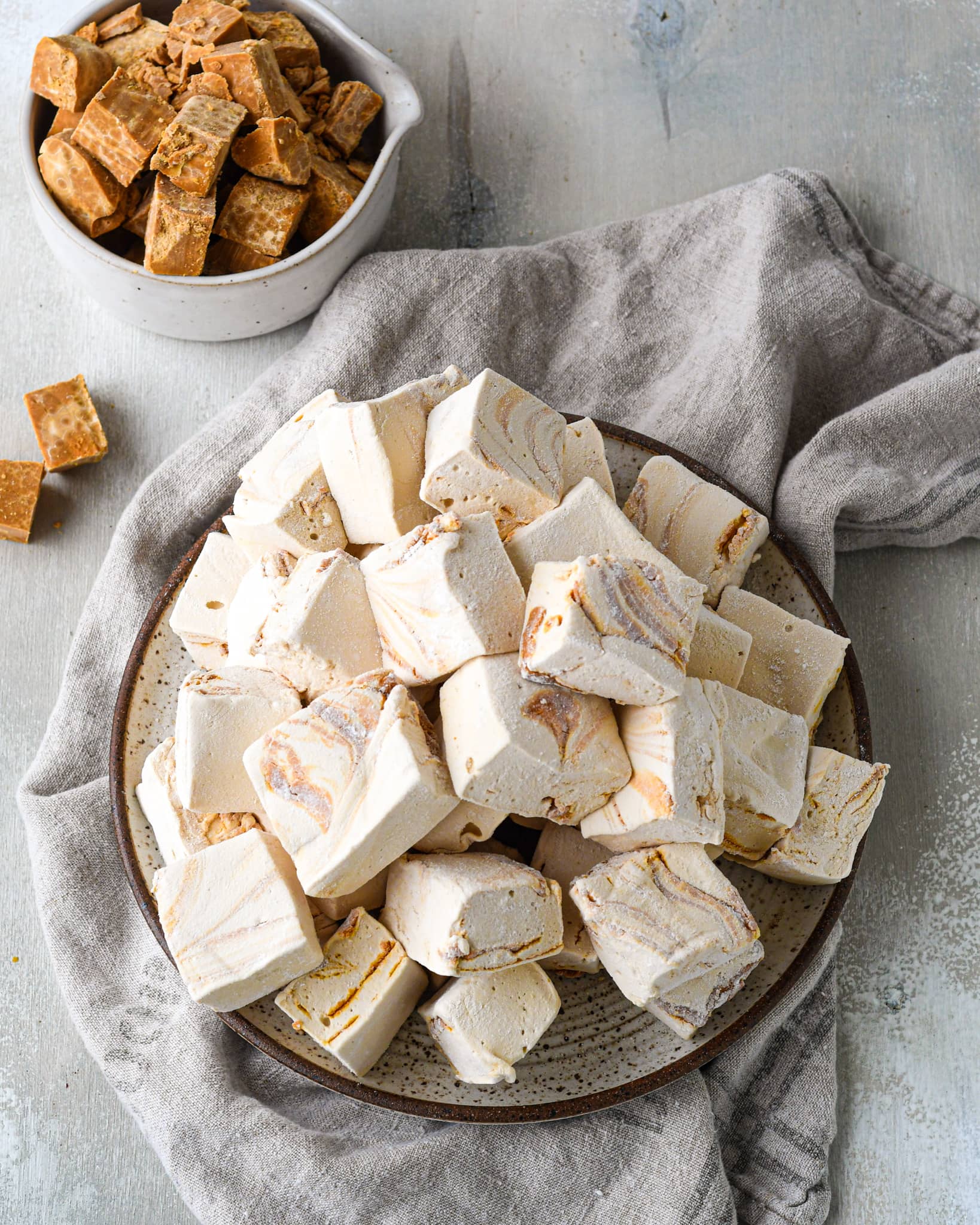 Unlike most marshmallow recipes you’ll find online, this one has absolutely no corn syrup in it at all, we’ll use honey! And to add depth to the flavor we use brown sugar because, yummy molasses. Also, we are not going to ruin our hard work dusting these babies in cornstarch which doesn’t melt on the tongue. Nope, nope. We’ll use organic powdered sugar and cinnamon. And after about 30 minutes of work, a few hours of rest, some chop chop and dust dust, you’ll take a bite, and suddenly you are transported, into all. things. fall. 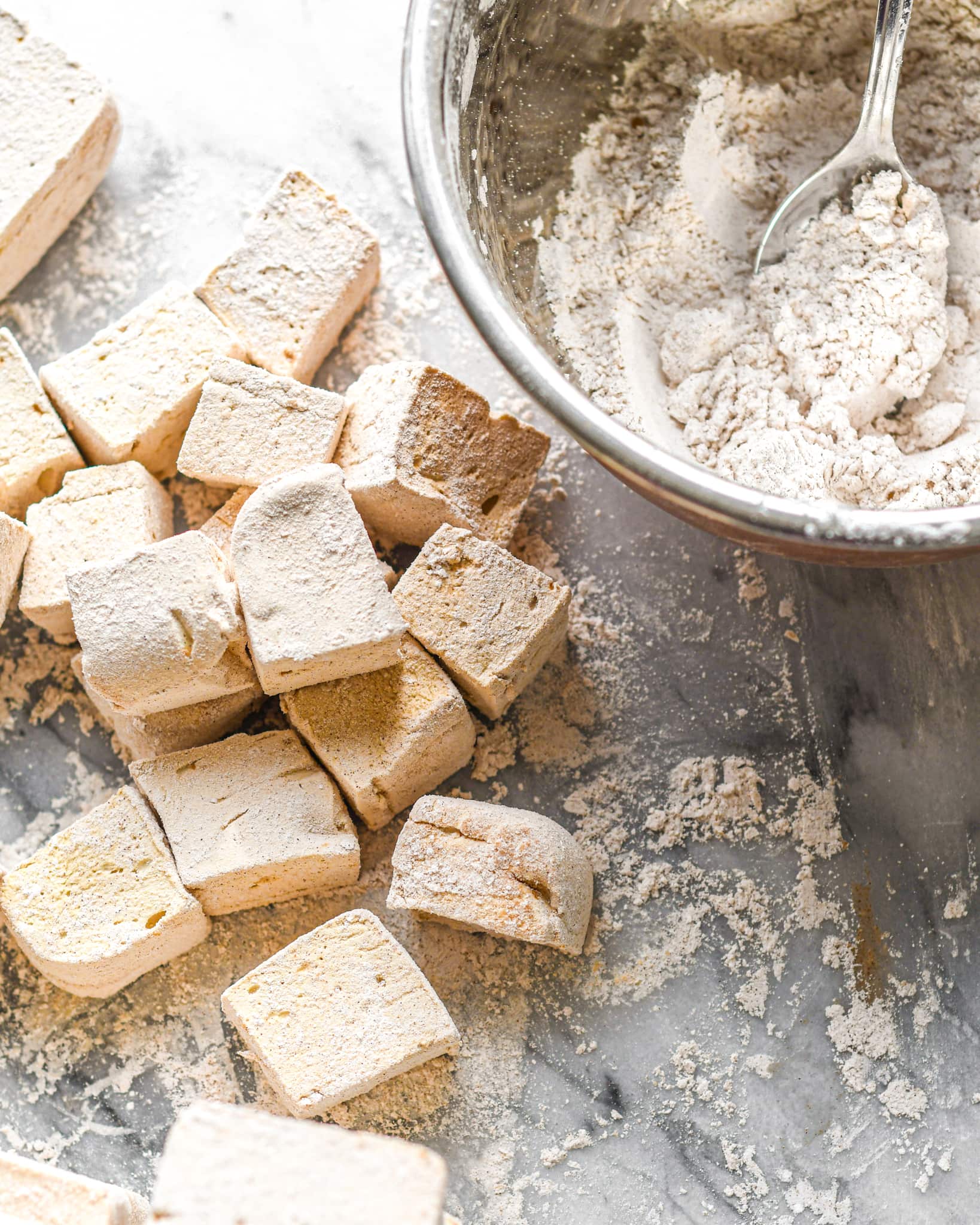 Like I do in these brown sugar marshmallows, I sometimes like to swirl in some chocolate into my apple cider fluff right before it sets. You get this snappy chocolate that has toasty notes of caramel and it complements the tart cider so well. I love these two flavors in this apple cider ice cream too!

To make the swirl you’ll chop up some white chocolate set it on a clean baking sheet and toast it in the oven at 250 F, stirring every ten minutes. Process it in a food processor to smooth it out and let it set overnight (covered, at room temperature). For more detailed instructions on how to make caramelized white chocolate check out this post where I have detailed instructions and photos.

For the mallows, you’ll melt the chocolate and layer and swirl it into the cider mallow fluff as you pour it into the pan to set. 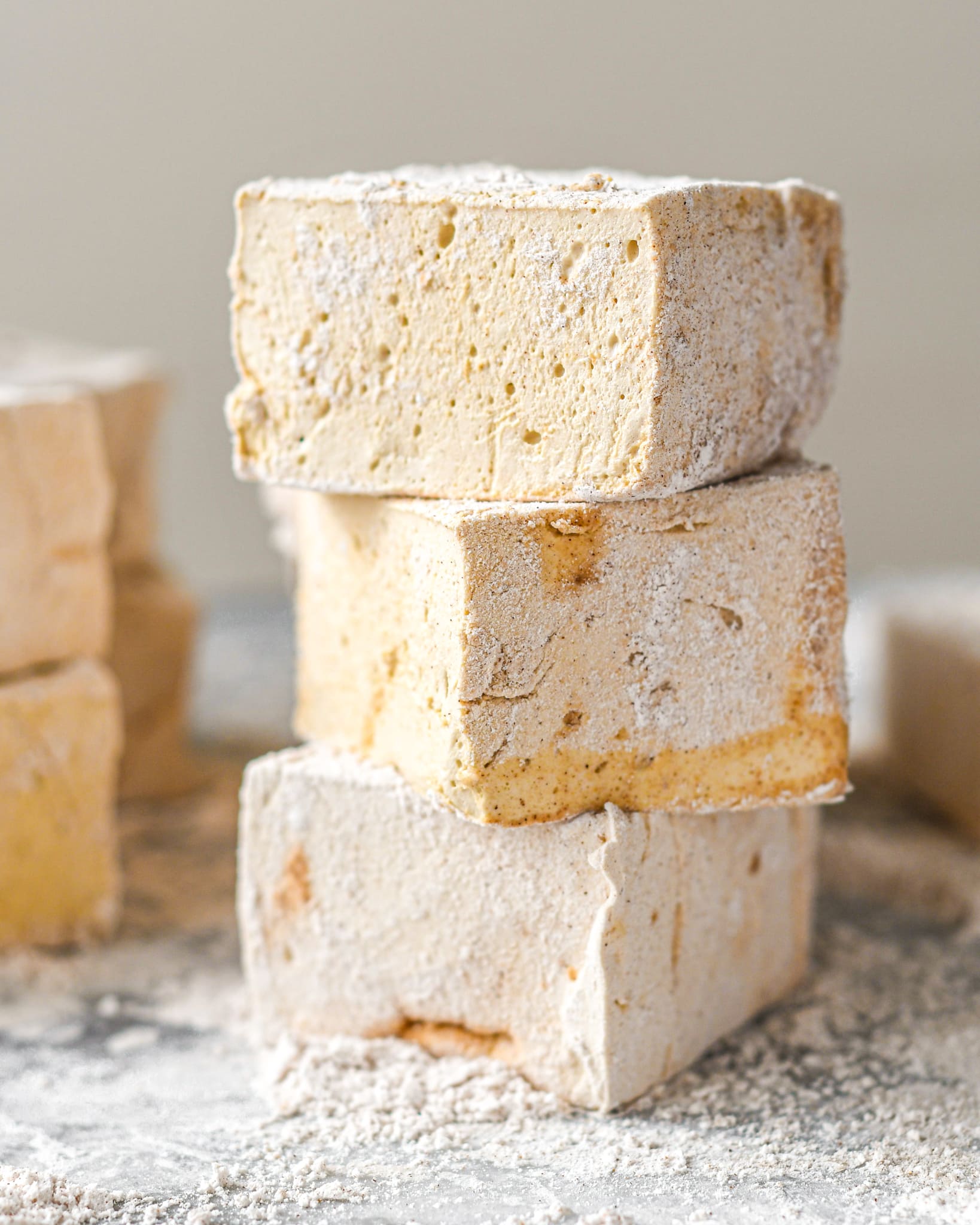 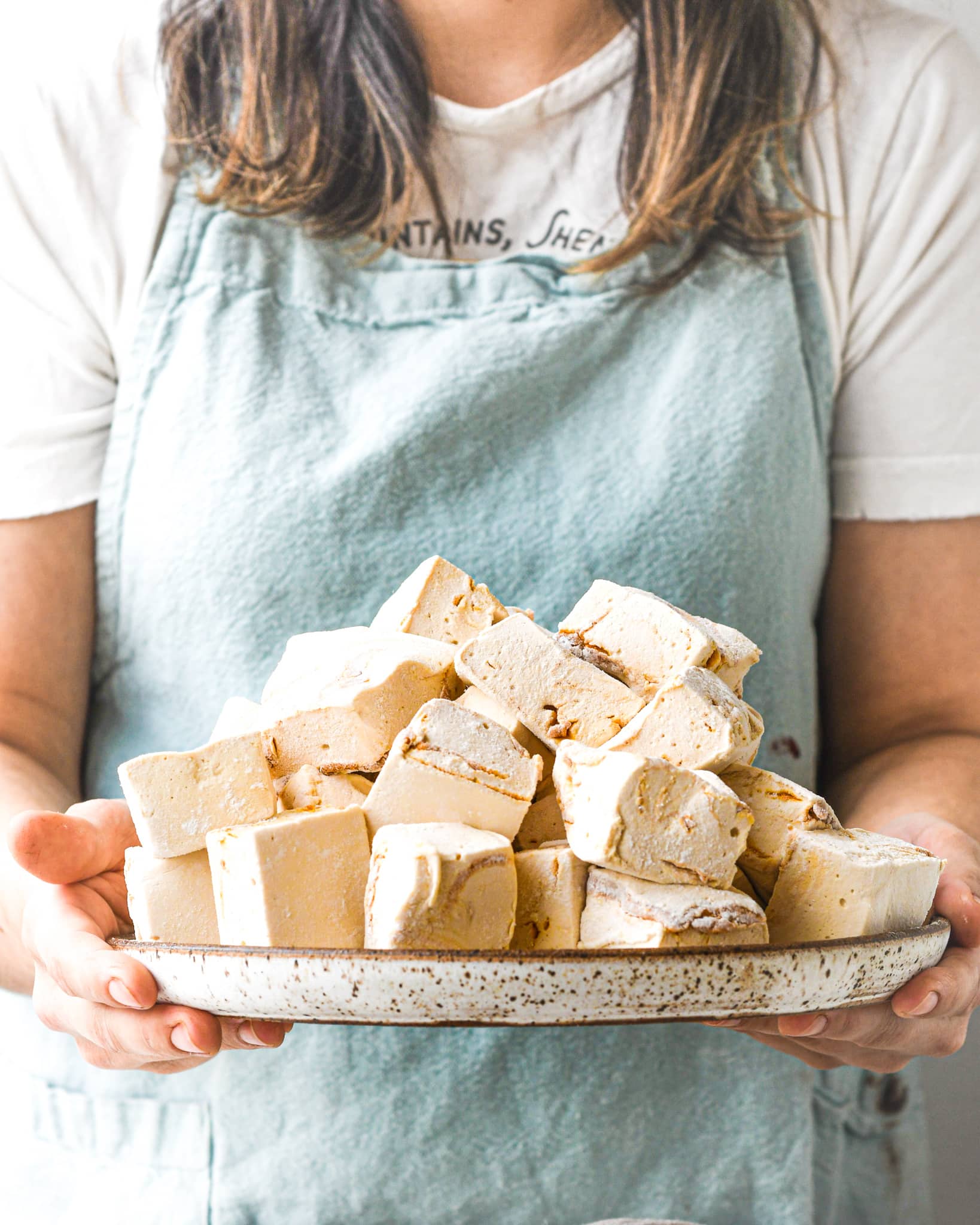 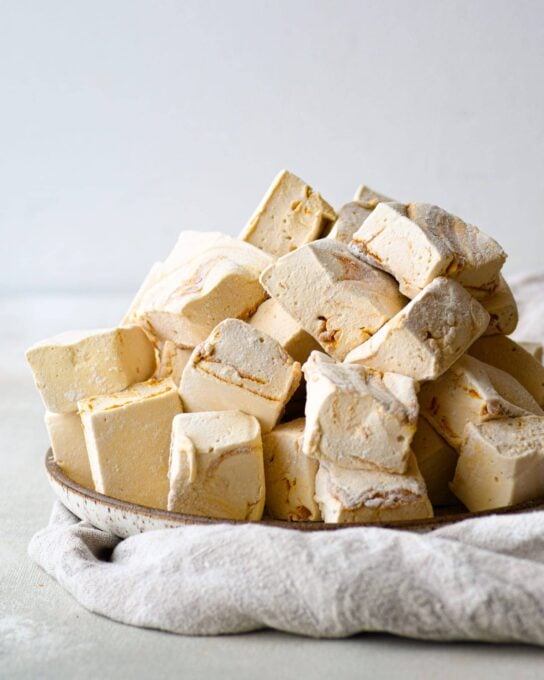 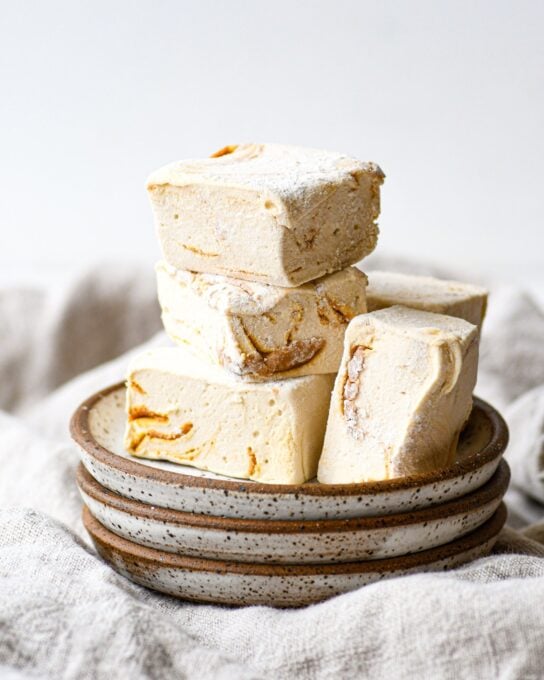