This exquisite birthday vanilla flavored cake is made in the tradition of the Malaysian Sarawak Layer Cake (Kek Lapis Sarawak): one sheet cake is baked in 3-5 minute increments, in separate layers to create a large layered cake. 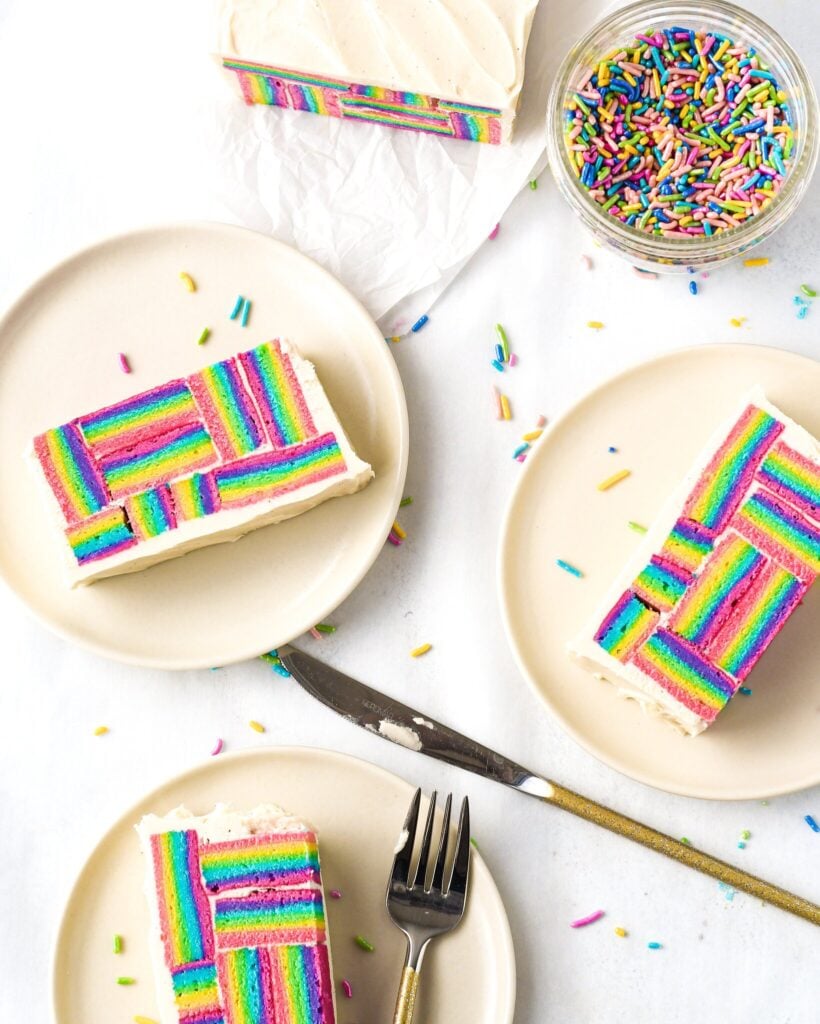 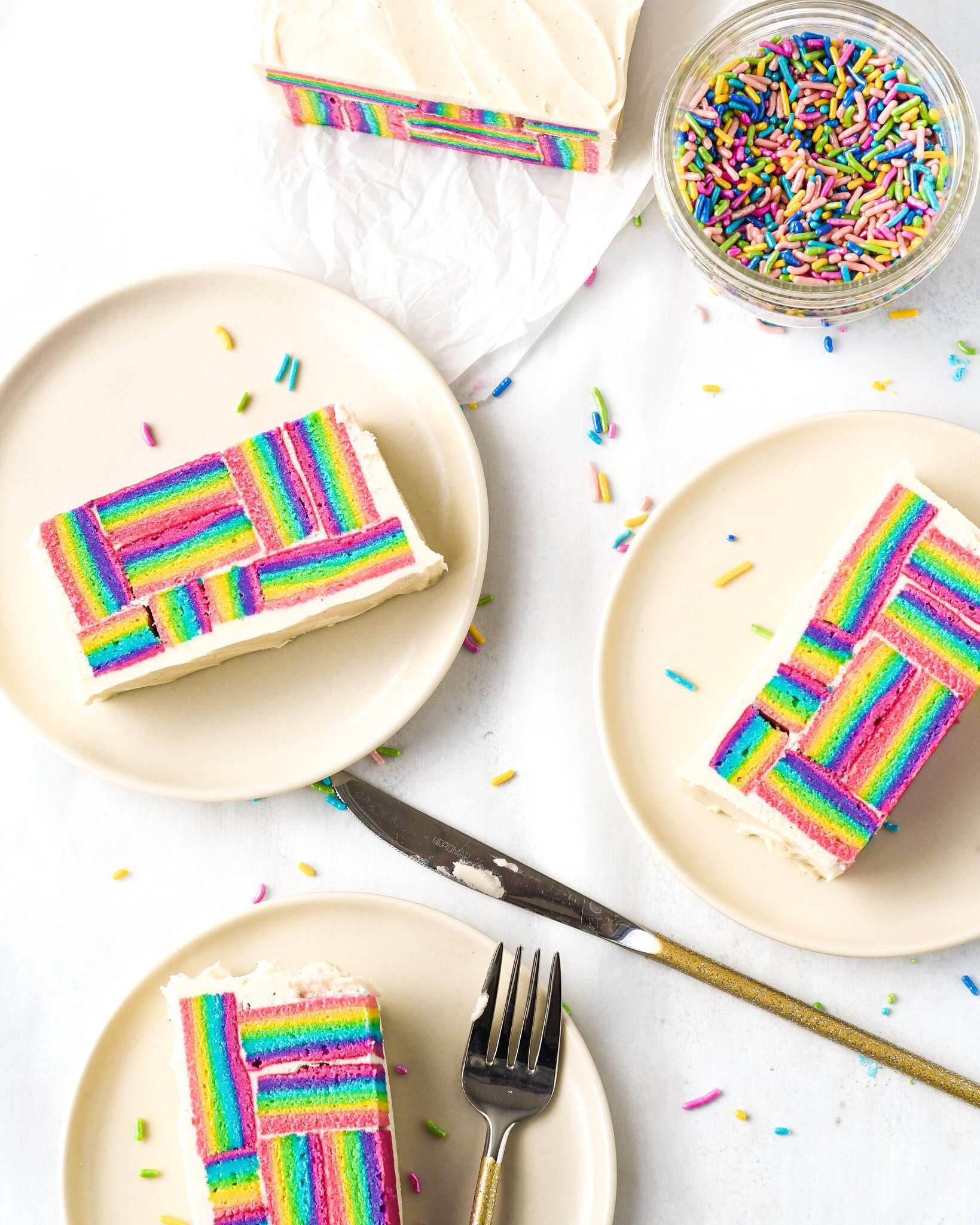 No your eyes are not fooling you! This is a real cake. This exquisite birthday vanilla flavored cake is made in the tradition of the Malaysian Sarawak Layer Cake (Kek Lapis Sarawak): one sheet cake is baked in 3-5 minute increments, in separate layers to create a large layered cake. The cake is sliced and then strategically placed in a loaf pan to create a gorgeous geometric design.

Shortly after my second daughter was born, my exhausted husband and I began a before-bed ritual: watching the tenth season of The Great British Bake Off. It’s always a great watch, especially to wind down with at the end of a tiring day with two young kids. But one night, episode seven, had me up for hours obsessively googling a cake I had seen the bakers make.

The bakers were tasked with making “Kek Lapis Sarawak” a Malaysian cake which translates to Sarawak Layer Cake. According to TBBO hosts, it would have several separate layers that were ‘grilled’, then cut, and then reassembled into intricate, precise, even layers and patterns. Wow, that sounded like A LOT of work. Were there a way to make it more home-baker friendly? 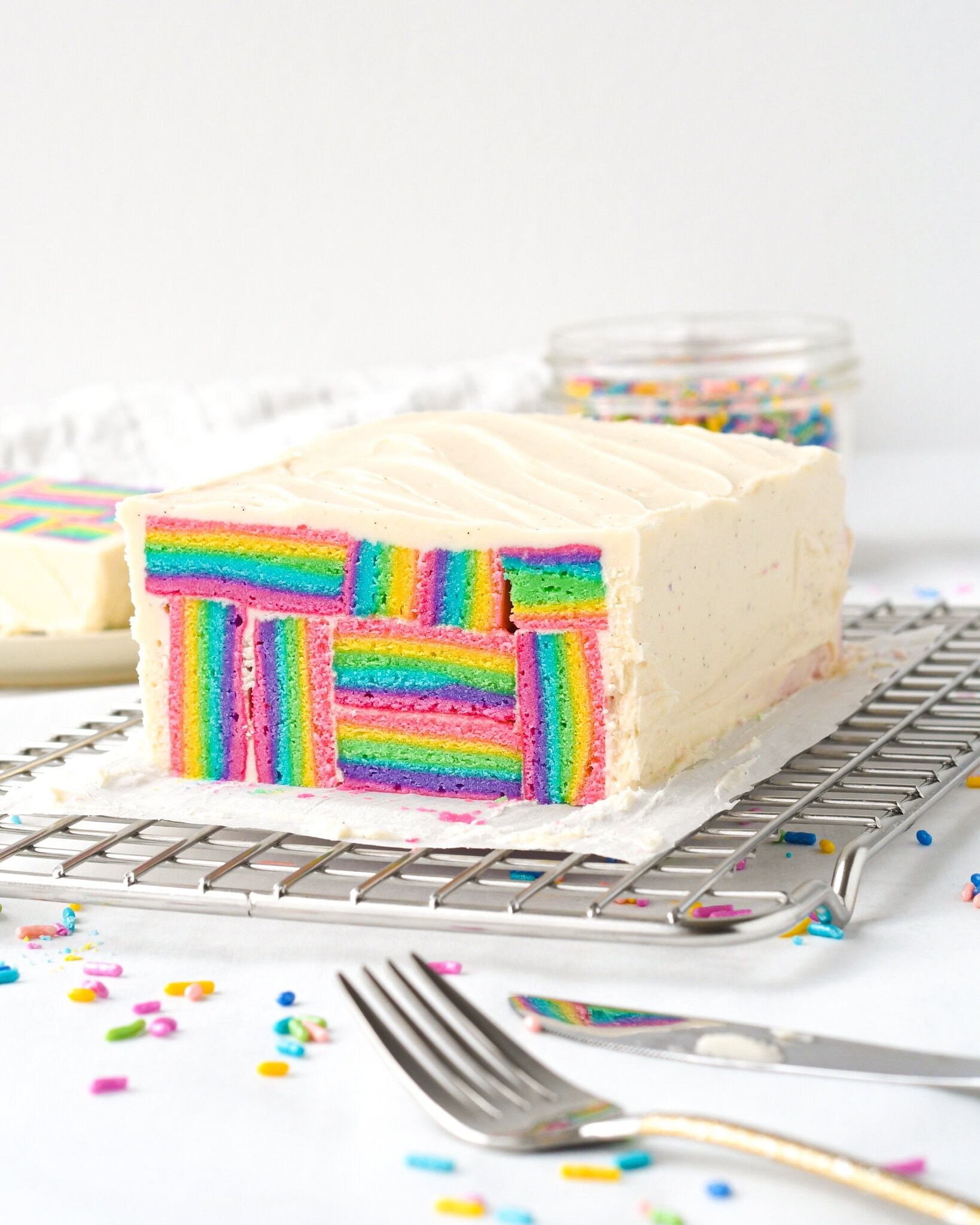 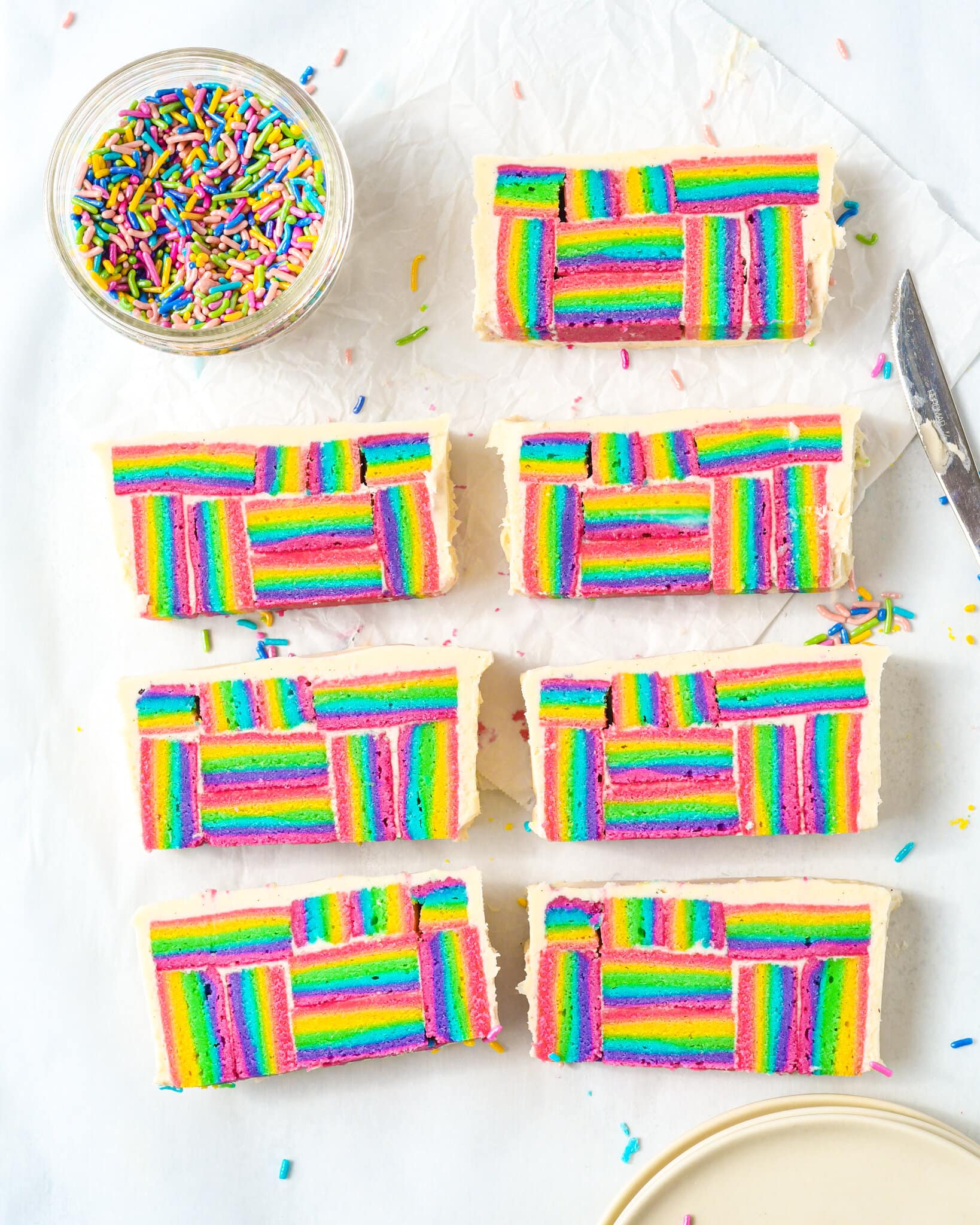 I watched the bakers spread cake batter, bake it just barely, then spread more, bake again… and repeat. Bizarre right? I wondered, could this be made with a regular white cake mix? So I tried it and I used some of the techniques I have learned from making Italian Rainbow Cookies.

Before you too get intimidated let me say two things: it turns out, “grilled” is the British way of saying broiled (but broiling a cake is weird too isn’t it? don’t worry, we’ll get there) and our layers are in no way going to be precise in cut or shape, but they will still turn out beautifully! Promise! 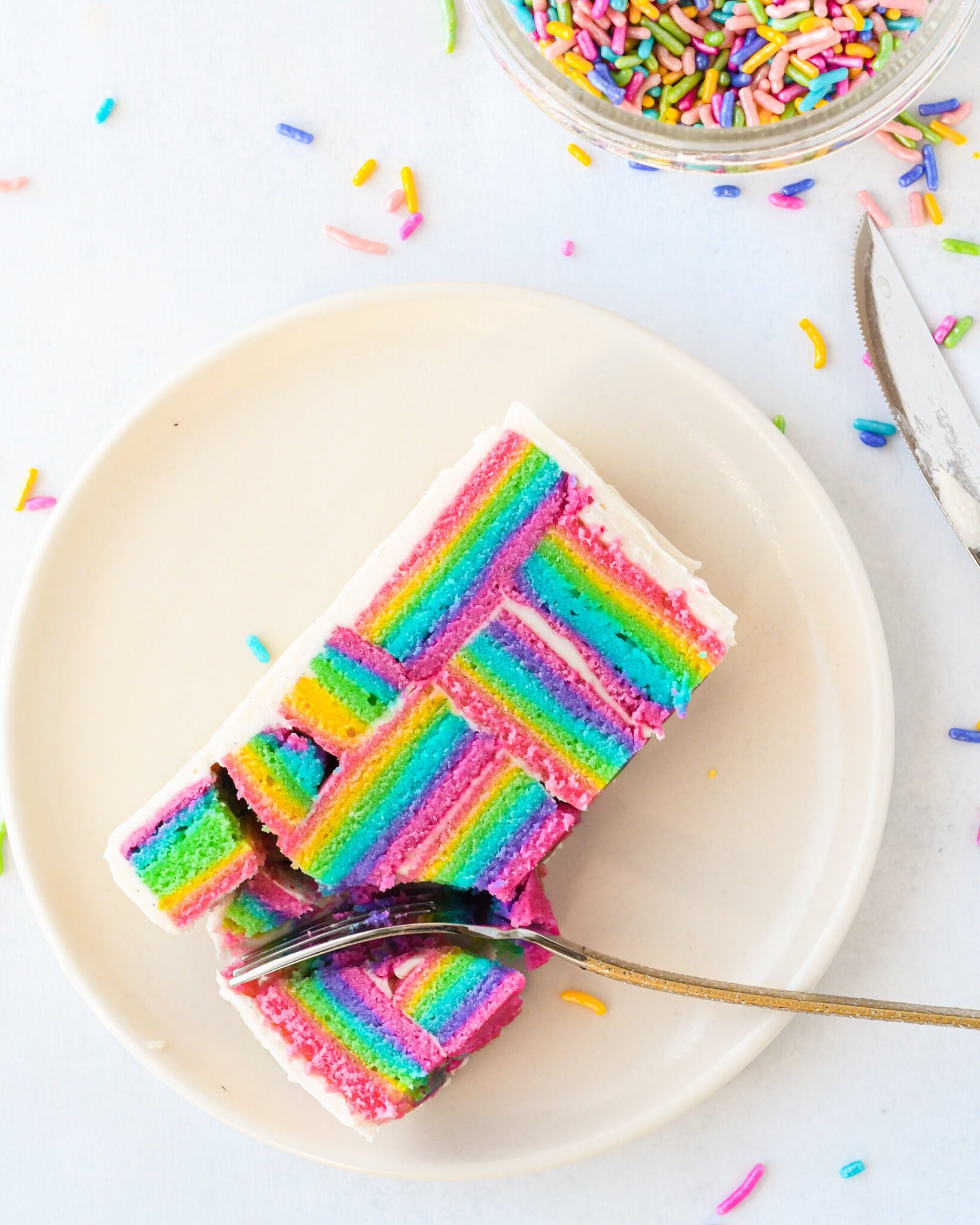 The cake I chose to make this was my favorite white cake recipe; you’ve seen it recently in the hidden rainbow cupcakes and probably elsewhere on the blog too. And yes, we take care to beat air into the batter and to make a nice fluffy cake but then we’re going to squash it out as this bakes and cools. I suppose another cake recipe would do but I have major trust issues when it comes to white cakes, so I stuck with this trusted one and it did not disappoint.

The way this cake bakes goes against everything you have learned about making a perfect cake: you will open the oven several times, you’ll use the broil feature and you won’t actually turn on the baking part of the oven until the very end. It’s crazy, but it’s gonna work and it’s gonna be beautiful and delicious and just wait until you slice into it and everyone ooohs and aaahhs. 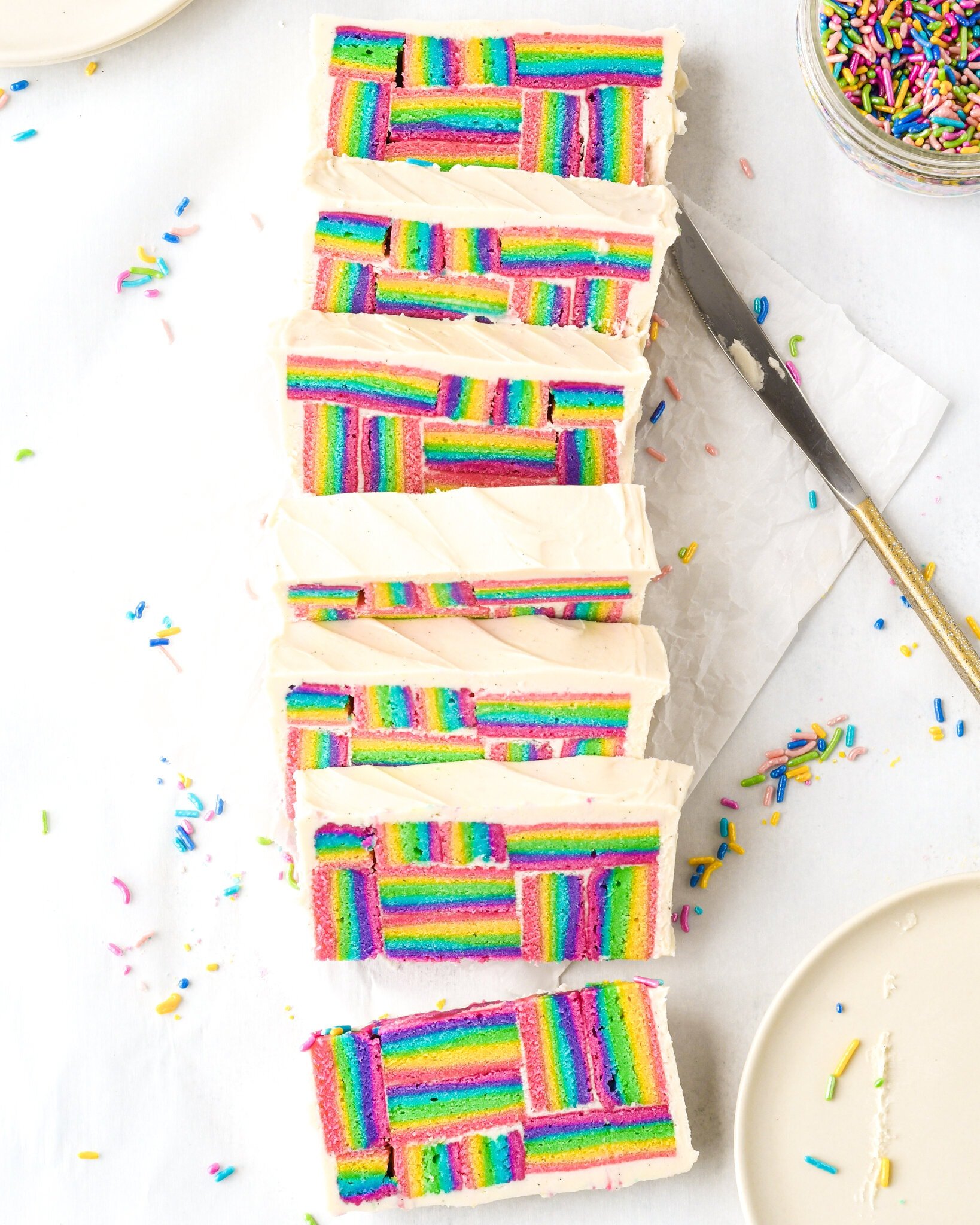 This exquisite birthday vanilla flavored cake is made in the tradition of the Malaysian Sarawak Layer Cake (Kek Lapis Sarawak): one sheet cake is baked in 3-5 minute increments, in separate layers to create a large layered cake. The cake is sliced and then strategically placed in a loaf pan to create a gorgeous geometric design.
5 from 2 votes
Print Recipe

I used a recipe I adapted ages ago from Stella Parks to make the white cake. If you have or prefer another white cake recipe, feel free to use it. I do however recommend a white cake and not a yellow as the colors will turn out more accurate.
Tip: I suggest you make your buttercream first because the process of baking this cake is so involved (in and out, in and out) so you can’t do it during. Another reason is that if you’ve made the buttercream first, considering it’s the same ingredients in your cake… you won’t have to wash the bowl of your stand mixer! Simply wipe it down to remove any chunks.
The buttercream is going to act like glue; holding the cake parts together. When you start building the loaf with the cake strips, imagine you are playing a game of tetris; vary how you arrange them so that you can get an interesting look when you are done. 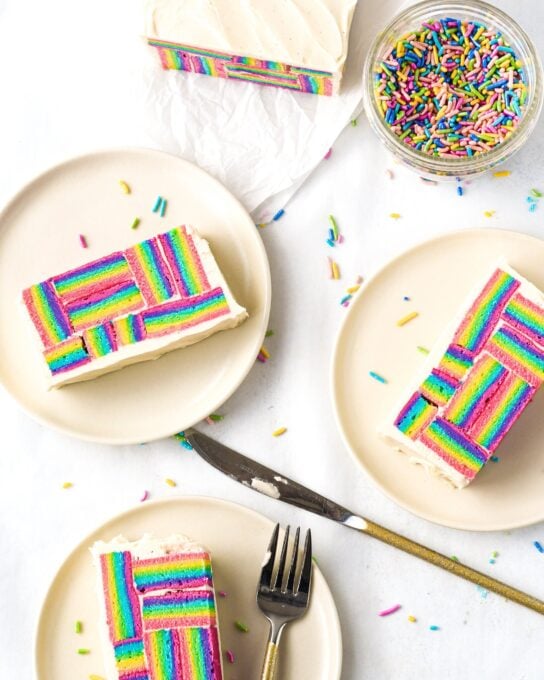