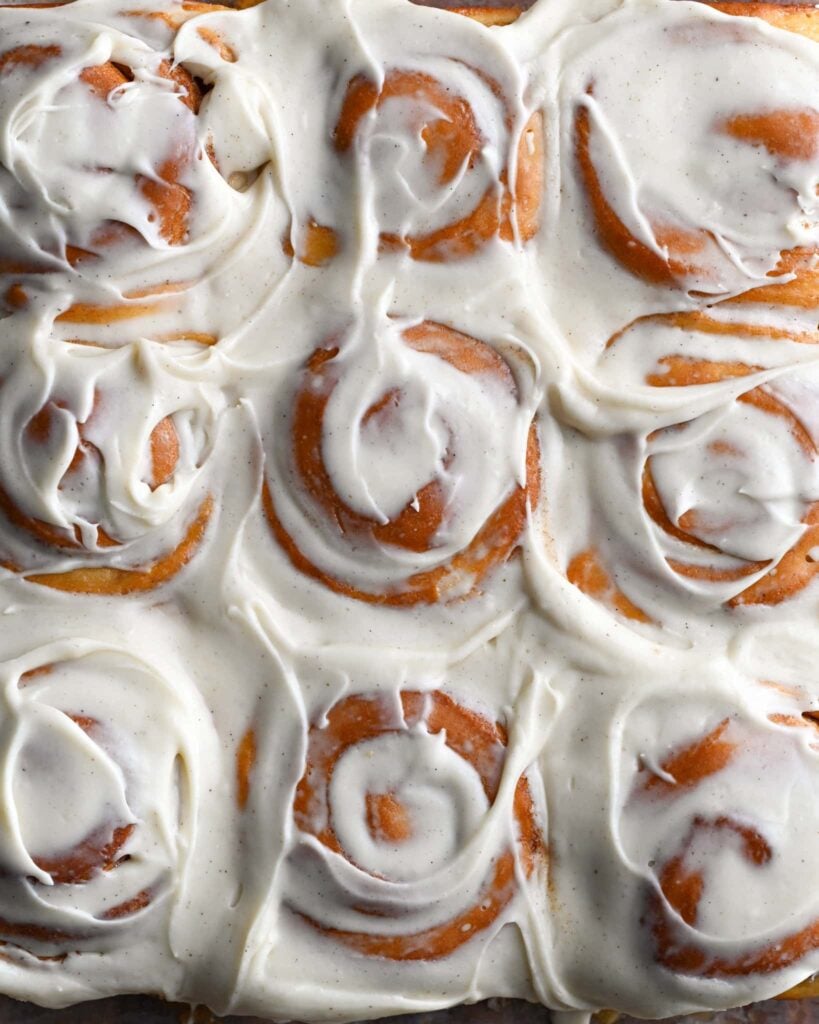 Perfectly ooey gooey homemade cinnamon rolls made small batch in an 8 square pan. This is an eggless recipe that makes just 9 brown butter cinnamon rolls. Made milk bread style, these stay nice and soft for days.

This recipe comes about using techniques from these brown butter cinnamon rolls (the roux, the browning of the butter, the heavy cream pour) and from these sour cream cinnamon rolls (sour cream really does give the fluffiest rolls!). If you desire a full batch, make one of those.

Flour: All-purpose, but if you have it and want to, use bread flour for a loftier chewier bread.

Sour cream: Full fat. If you’d like to use yogurt choose a full fat greek yogurt; full fat makes for a softer bread.

Sugar: Fine granulated goes into the dough and brown sugar (I like a dark brown here) is in the filling.

Butter: Will be browned, salted or unsalted is fine.

Heavy Cream: This is added right before baking, it makes the rolls more gooey. It’s optional. 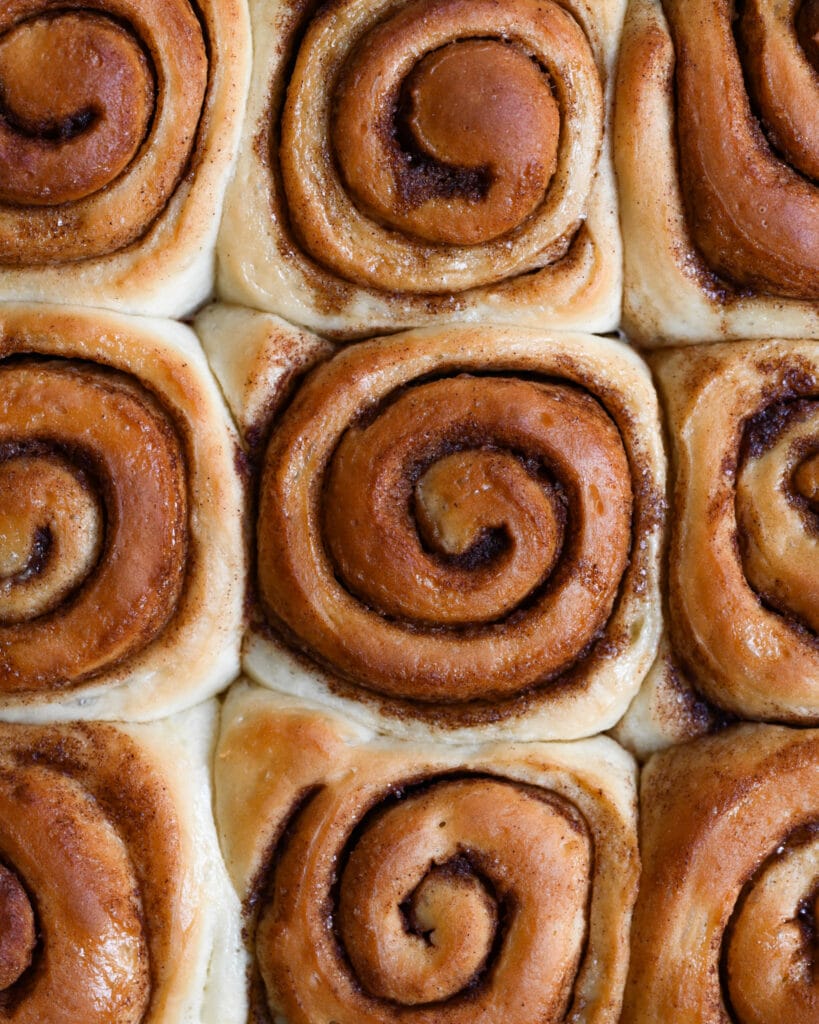 Sam still fusses over a Small Batch of Cinnamon Rolls

I have a few little fussy steps which you might not see in your usual cinnamon roll recipe: I do a tangzhong with some of the liquid and flour to make a roux (this gelatinizes some of the flour starches and leads to a softer roll – it is a chinese technique learned from making japanese Milk Bread); I brown the butter for my filling, and I pour heavy cream over the dough so that the rolls become gooey.

You don’t technically have to do any of these things: you can add the milk and flour to the dough as is, you can use ¼ cup melted butter for the filling and you can skip the heavy cream step. If I had to choose one step not to skip it would be the tangzhong because I really do think it makes a difference in giving a softer, pillowy roll.

How to Make a Small Batch of Cinnamon Rolls 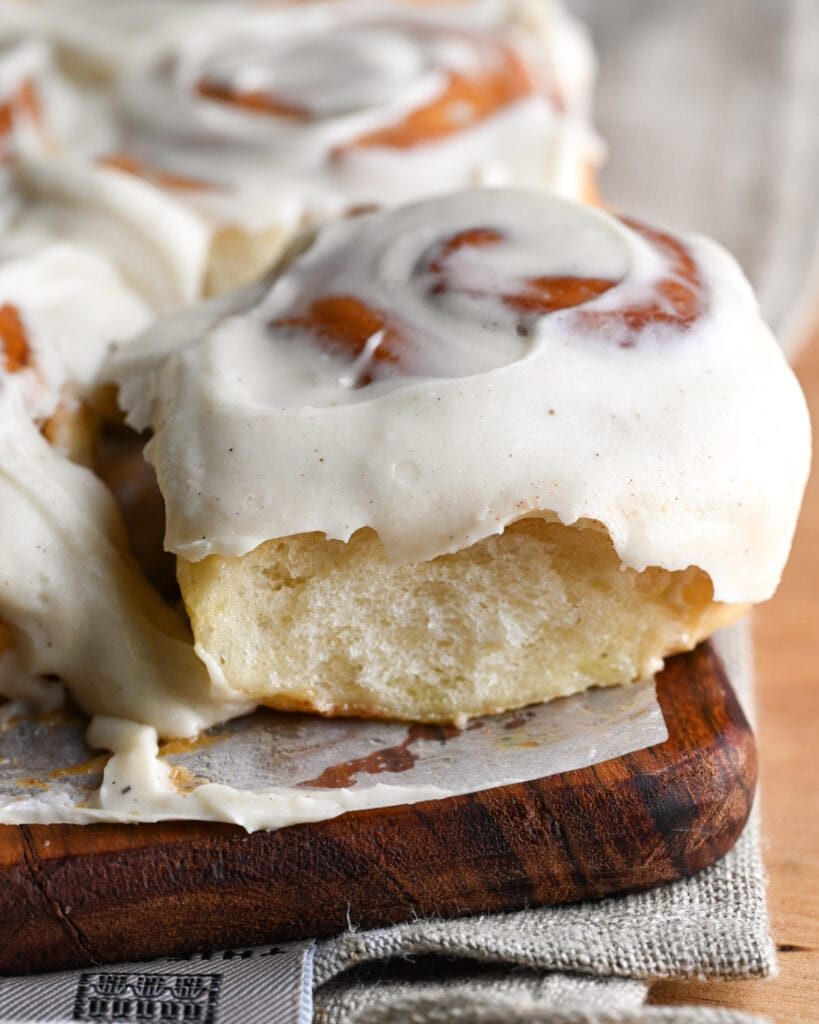 How to make these Overnight Small Batch Cinnamon Rolls

To do this we’ll keep the recipe as is but lower the yeast amount considerably and use cold milk in the dough. The first rise will be done on the counter, at room temperature. I leave mine out for about 12 hours so; mix the dough at 8pm and start shaping them at 8am. The rising time and reduced yeast amount was actually perfect. For reference, my kitchen is about 70 degrees F.

The obvious question is; will the dough be safe to eat after sitting on the counter so long? I am not 1000% percent sure as I don’t have a degree in food safety, but consider that a lot of waffle recipes sit at room temperature overnight; that there are no eggs in this dough and that in the oven it will bake at a very high temperature. I’ve made them this way and find they taste absolutely no different than a two hour rise.

Can I do a shorter first rise at room temperature and a longer rise overnight?

It should work, but in this case I’d set them, filled, shaped and in the pan, in the fridge overnight rather than on the counter, less we over activate the yeast and they overproof. They probably won’t rise much in the fridge so leave them at room temperature when you wake up, until they are ready to bake. 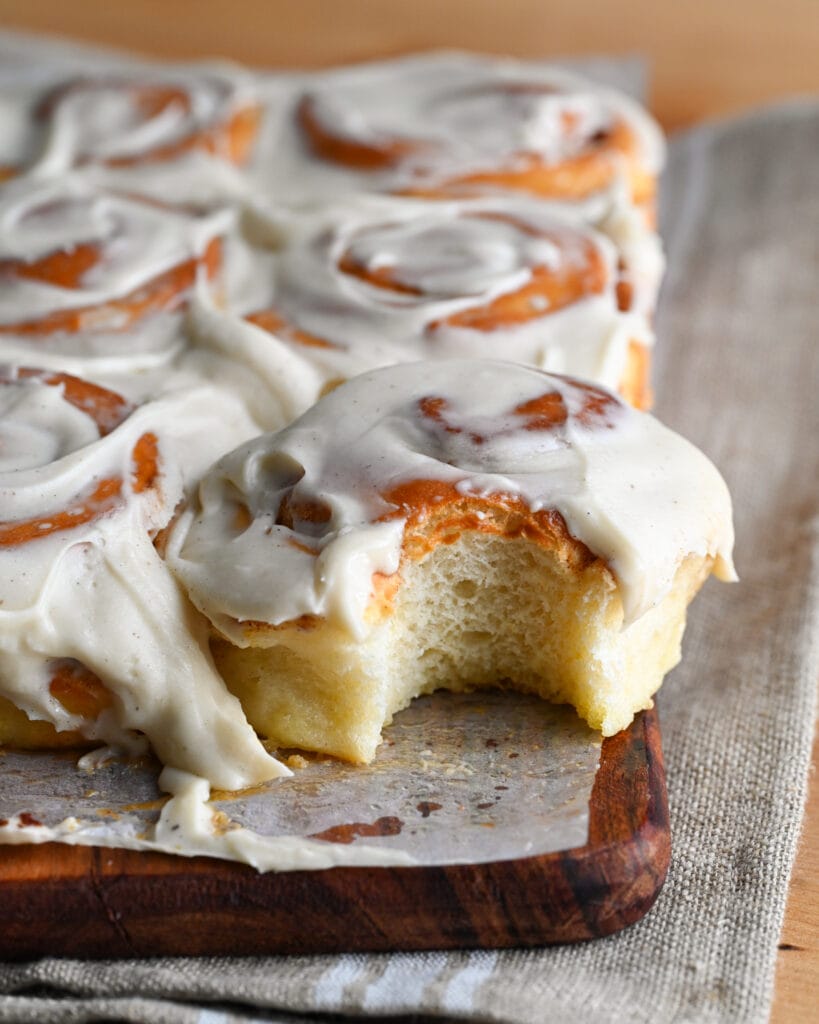 If you’re coming here anytime between September and December you may wish to “pumpkin spice” these, here’s a quick and easy way to make a small batch of pumpkin spice cinnamon rolls:

Make the roux as directed. Swap the milk in the dough for 1/2 cup or 113g pumpkin puree and reduce the sour cream to 1/4 cup or 50g. The spices will be mixed with the sugar so before you sprinkle the sugar onto the filling add to it: 1 1/2 teaspoons cinnamon, 1/2 tsp ground nutmeg, 1/2 tsp ground ginger and a pinch of ground cloves. Spread it over the browned butter and roll it up.

Proceed with everything else as directed below.

A small batch of supersoft and fluffy cinnamon rolls made without eggs. 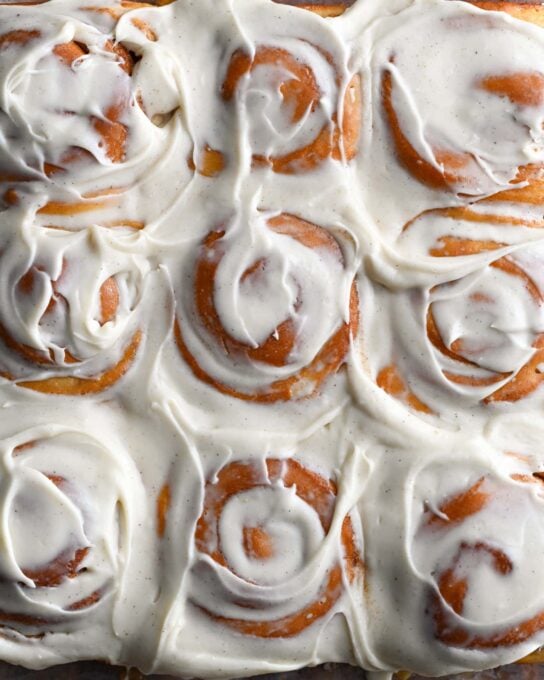