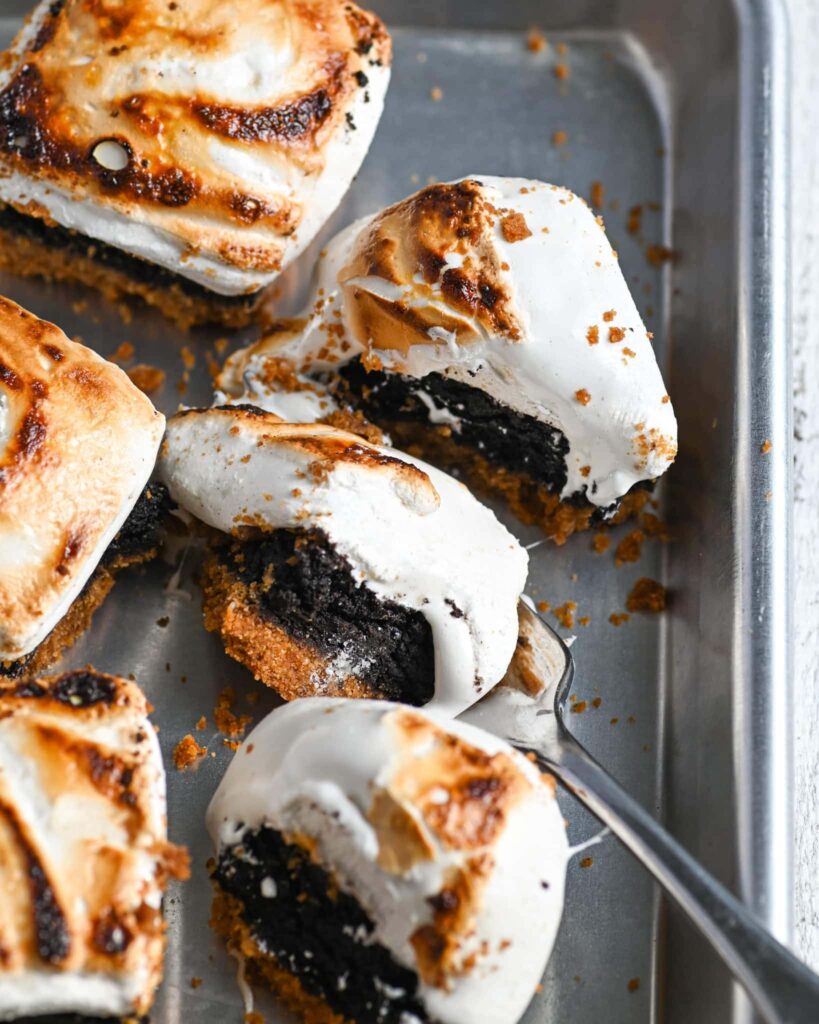 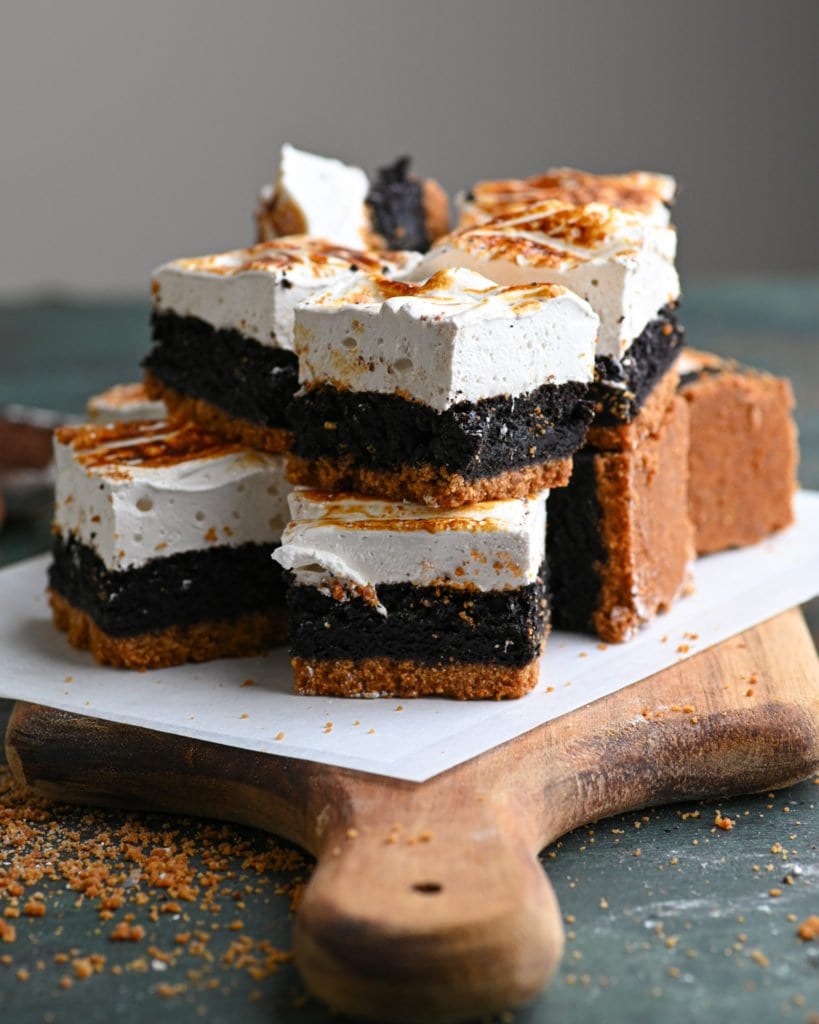 Many a ‘smores brownie’ recipe go something along the lines of: brownies mixed with bits of graham crackers & tiny marshmallows baked together. But when I picture s’mores, I am drawn to the individual layers, each complimenting and completing the next: melty, gooey chocolate, a toasty smoky mallow and a crispy case to hold it all together. So for this recipe I broke down the components into three layers that whip up pretty easily and all come together to give you a true ‘smores brownie’ experience.

Before we dive into the recipe, I’d like to talk to you about cocoa, cocoa in brownies and why what kind you choose can make a difference in your baking – and even in your brownies!

My go-to cocoa for most of my recipes on buttermilk is dutch-process cocoa; you’ll find it in almost all the brownie recipes on the site, my chocolate cake, double chocolate cookies, babkas, etc. But I have often found myself reaching for a natural cocoa, especially in recipes where I’d like other flavors to shine alongside the cocoa, with brown butter for example. And of course, there are recipes for which only the darkest dark of cocoas will do, looking at you Black Cocoa Cake, and those are only for those of us who love a very, very dark chocolate. 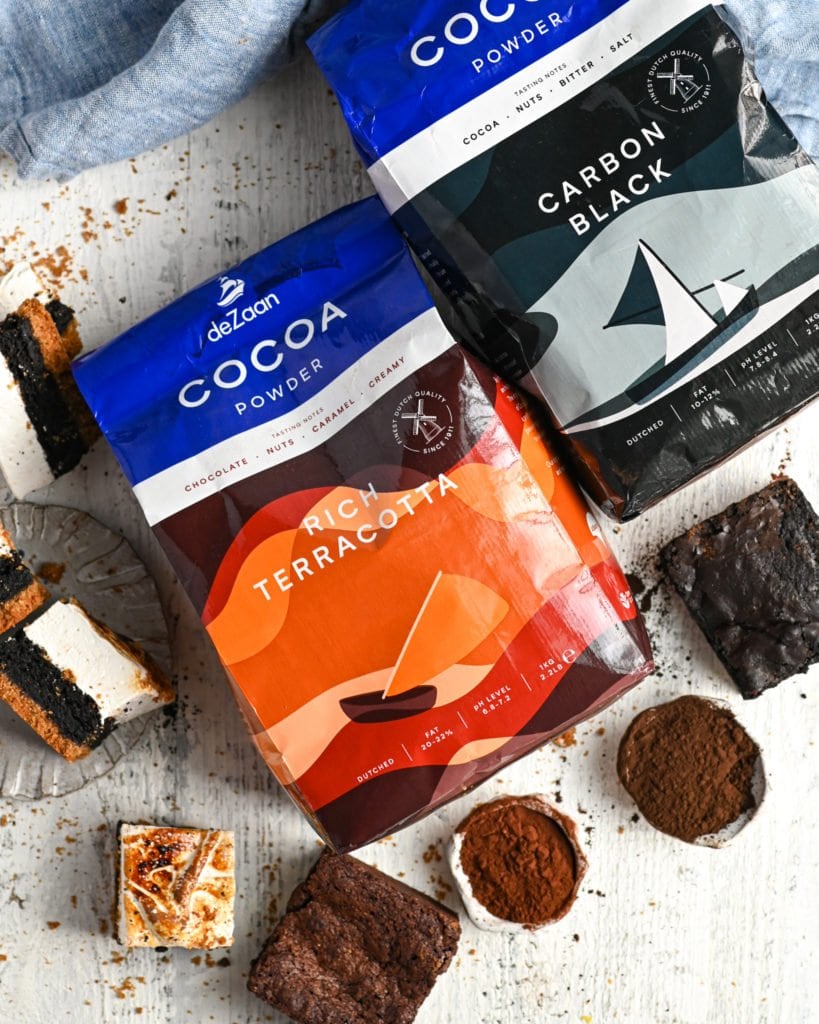 This post is sponsored by deZaan. All opinions are my own.

Types of cocoa powder and what makes them so different

If you’ve been baking for a while you have probably heard of the main three different kinds of cocoa: natural cocoa, dutch process and black cocoa. Picture each of these three different cocoas on a gradient of color which corresponds to the level of alkalization: the darker the color, the more the cocoa solids have been dutched (treated with an alkaline solution). The treatment changes the color but also the taste: dutch process cocoa is darker, less acidic and tends to be less bitter compared to natural.

The dutching and how it affects the acidity of cocoas is something that usually comes up when trying to figure out recipe substitutions: for recipes that call(s) only for baking powder, it’ll be best to use a dutch process cocoa. If there’s baking soda in the recipe, you’ll use natural cocoa which will react with it when heated. These two rules are not written in stone though; there are ways to balance out the cake with other acids but these often take a little more chemistry knowledge than most of us are armed with.

You know what hardly ever comes up in a discussion about different cocoas, which I happen to think is equally important? Fat content. This is something I started paying more attention to when I was developing my black cocoa cake; I noticed that it was drier, right out of the oven and it dried out more quickly than my usual chocolate cake in the days that followed. I found ways to compensate for the loss of fat in that cake, but it led me to an investigation to learn more about cocoa and fat content. Most brands don’t list this information on the package itself but some googling can yield an answer. One major standout brand to all this was deZaan, a Dutch brand that has been pressing cocoa for over a century and has a wealth of information on their site about their cocoa. 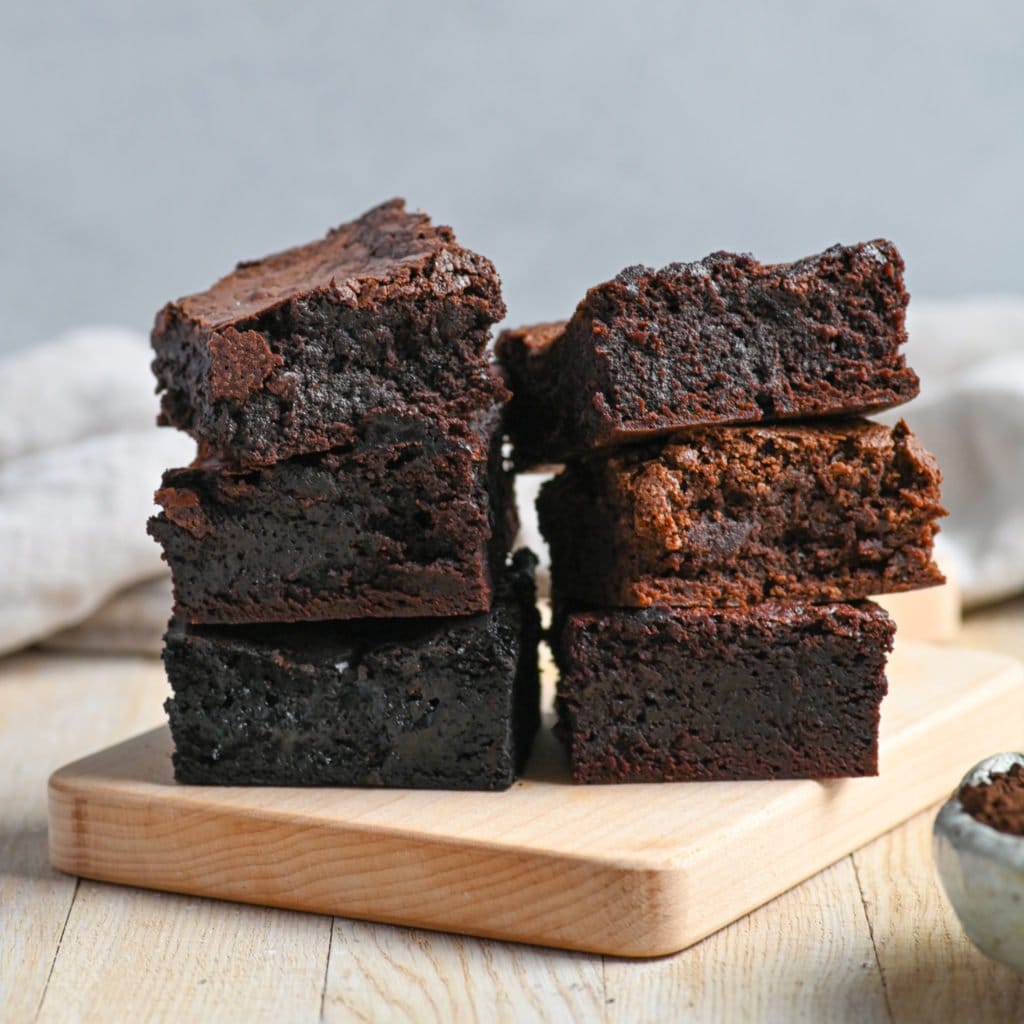 deZaan makes two natural cocoas; True Gold and True Dark, three dutch process cocoas; Terra Rossa, Rich Terracotta and Crimson Red and a black cocoa powder they call Carbon Black. Each of the cocoa profiles different flavors; you can learn more about each of them here. And you can purchase them here.

To me, the Goldilocks of their cocoas is the Crimson Red, dutched, high in fat content and stands out for its smooth, velvety notes that border on ‘buttery’ in the best way, so if I were to invest in one of their bags that would be the one to snap up. But first, let’s talk about brownies! 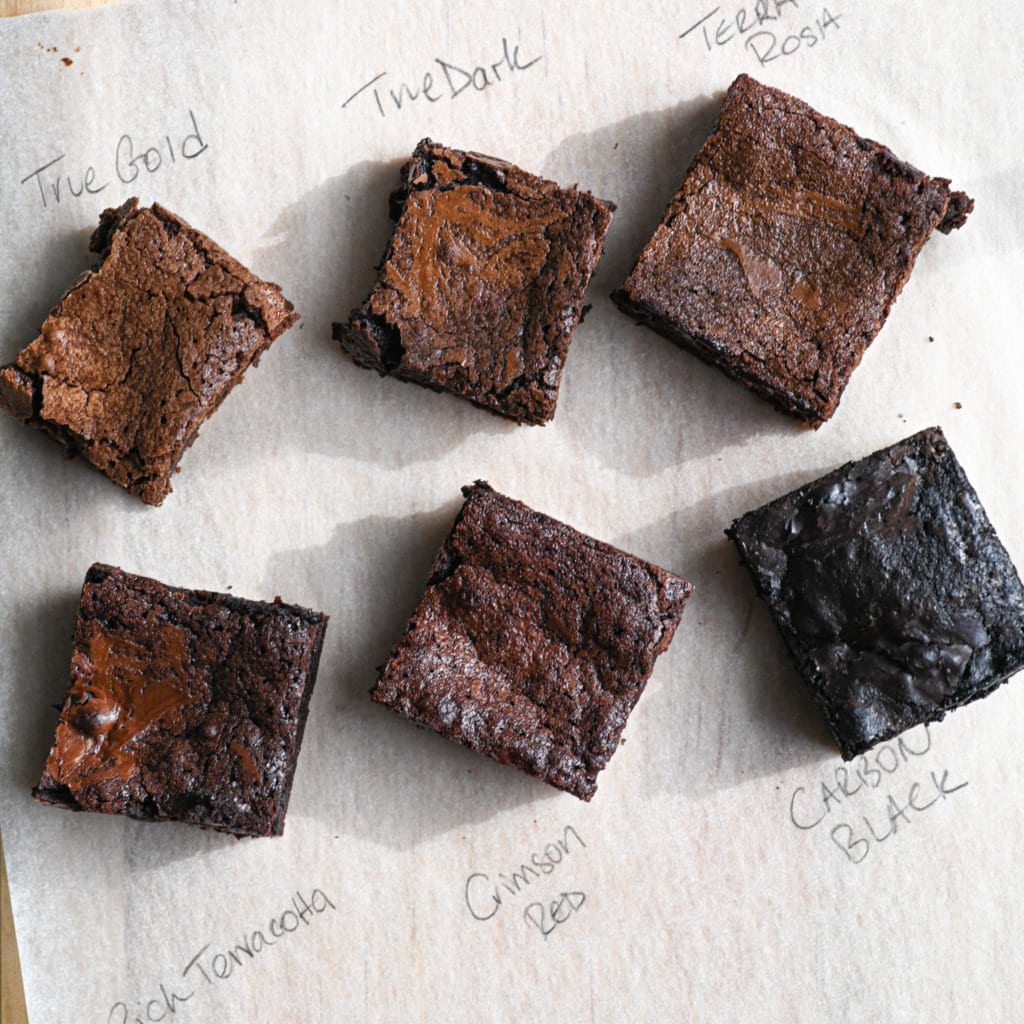 I put deZaan’s six cocoas to the brownie test: given their different pH levels a batch (or six!) of brownies was the perfect choice because I knew wouldn’t need to make any adjustments to my recipe and could then focus the comparison on taste, color and texture. Brownies were also a solid choice because there would be no other distracting flavors. Would the fat content impact the brownies? How would each cocoa compare in terms of taste?

If you look at the photo, you can see the gradient of brownie color beginning with golden brown, (from the aptly named True Gold Cocoa), darkening in the True Dark and Terra Rosa Cocoa brownies, reddening in the Rich Terracotta and Crimson Red cocoas and finally, ending on a stark black, with the Carbon Black cocoa. 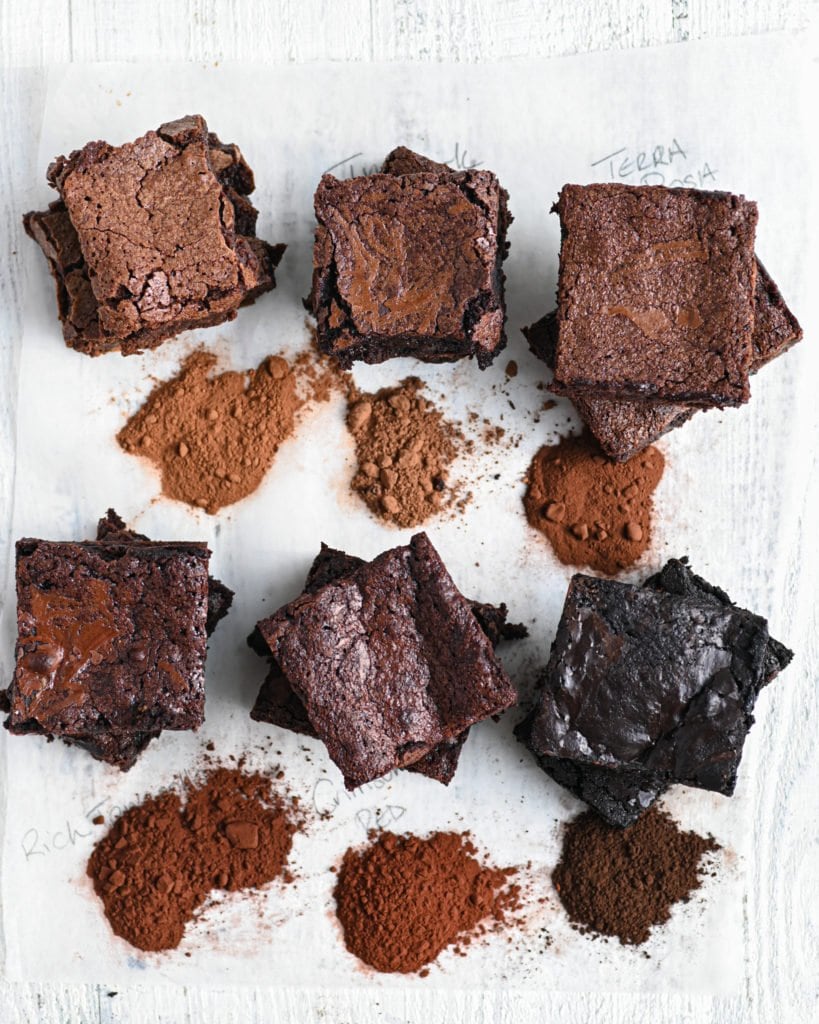 Because brownies are so butter-forward and because my recipe has very little flour, the fat content didn’t matter as much but it was somewhat detectable: the True Gold definitely was a tad drier and almost flakier (especially at the top and at the edges, see the photos). I believe I slightly underbaked the Carbon Blacks so you don’t notice as much there. But the rest of the brownies, made with cocoas with fat contents that ranged from 20% to 24%, were all fairly similar in terms of moisture level and baked up a perfectly fudgy brownie. Cocoas with a higher fat content are definitely the way to go for brownies.

In terms of flavor, my personal favorite brownies were the ones made with dutched cocoa, especially the reddish three: Terra Rosa, Crimson Red and Rich Terracotta. While each brought a little something different in terms of flavor, they left the lingering deep chocolate taste I personally love, the kind that makes you pause to savor it and keeps you coming back for more. The two natural cocoa based brownies were rather mild in flavor, True Dark was almost coffee-like. The black cocoa brownie was a beast of its own; incomparable to the rest as the taste was really in its own lane of flavor: deep, smokey and it dominated the six in terms of color.

Soooo… what cocoa is best for brownies?

Here’s the beauty of everything we discussed above: when it comes to brownies (specifically a brownie recipe that does not have leavening) you can have your choice of cocoas without having to adjust the rest of the recipe. Want a mild chocolate, coffee like taste? Reach for natural cocoa. Want a smoky, nearly black colored brownie? Black cocoa is what you use. For something in between, dutch would be the way to go.

This recipe below, and any of my brownie recipes, will work with any cocoa you have or can find. But you’ll want to keep in mind the different flavor profiles and how you’ll feel about a slightly drier (flakier) brownie versus one that is soft and fudgy in the center.

And for this recipe in particular, because the brownie is sandwiched between a crumbly graham crust and a soft, very sweet marshmallow – those different flavor profiles are going to matter. My recommendation for these is either a dutched cocoa or a blend of dutch and black. For the s’mores brownies pictured I used a blend with the Carbon Black, because the bitterness of the black cocoa checks the marsmhallows’ sweetness and the dutched Rich Terracotta will give you that deep chocolate taste you’ll savor. Now shall we make them? Let’s!

How to make S’mores Brownies, the quick guide 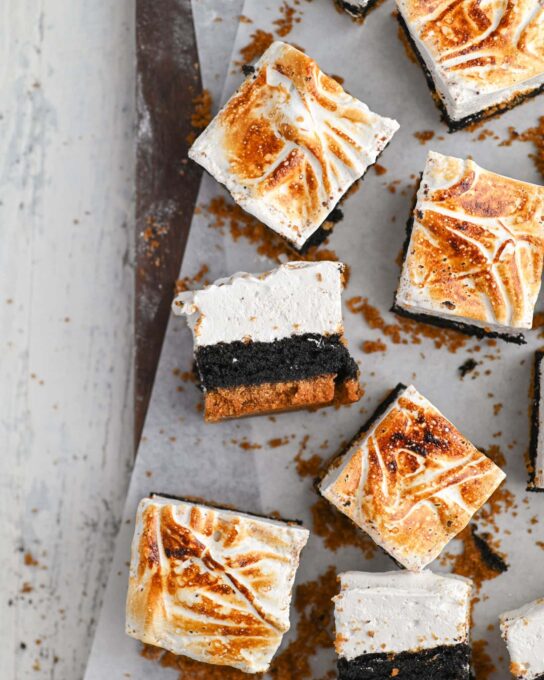 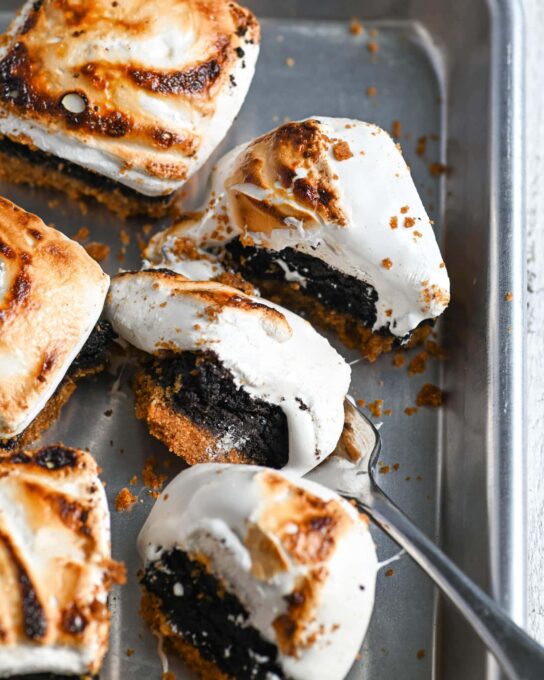