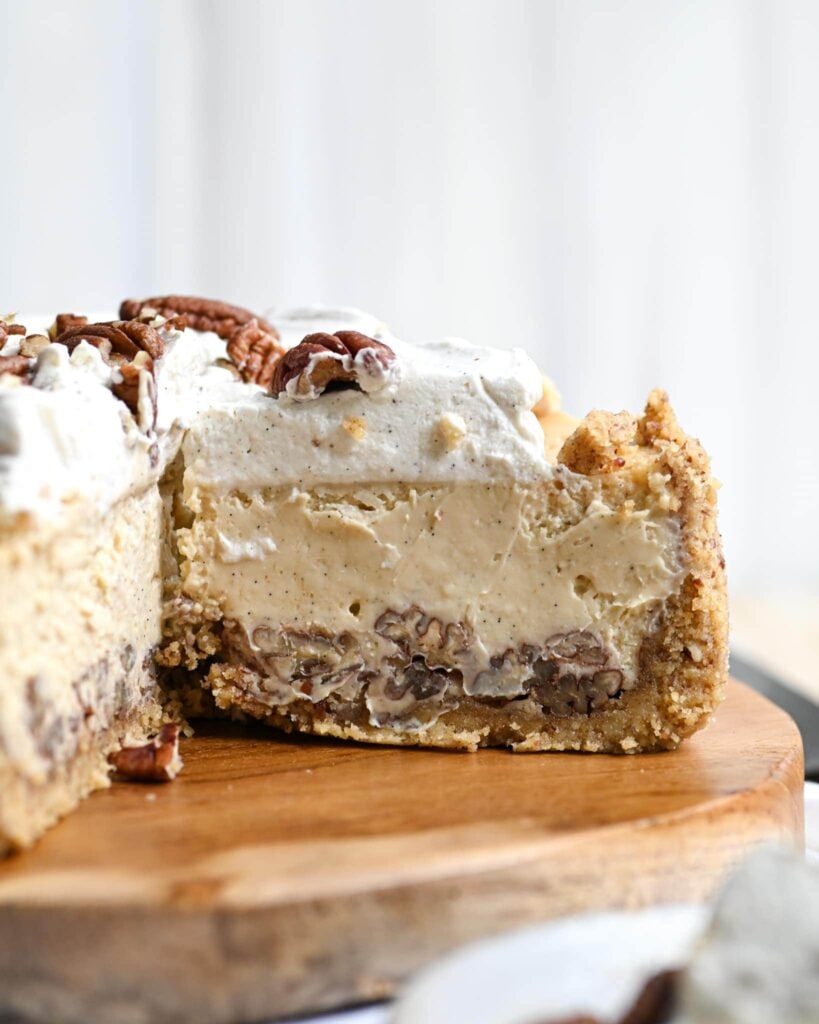 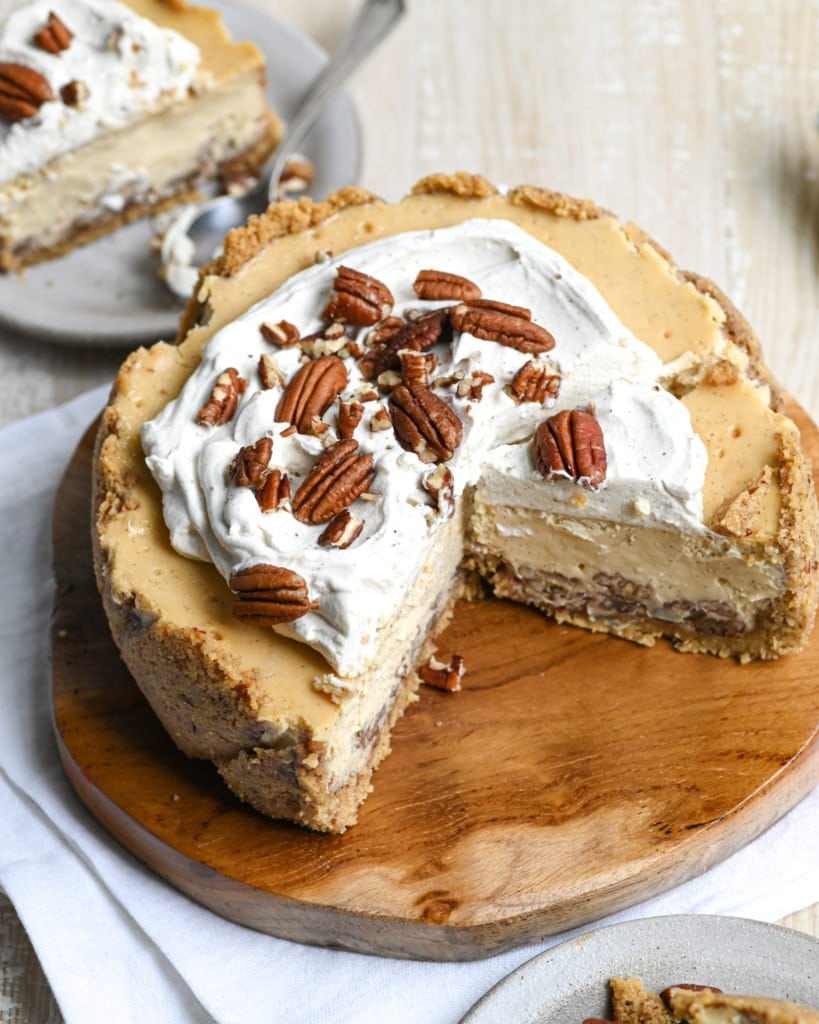 Do you ever feel like you’ll only scrape a vanilla bean for an occasion? For a really special dish? I won’t do it unless I know I’ll get to see those pretty specks in my final dish. A chocolate cake will never get a vanilla bean. A cheesecake? Will ONLY get a vanilla bean; they just show off so well, speckling that wonderfully creamy inside.

And this cheesecake? Oh this cheesecake… The idea was born after I saw a photo of a ‘butter pecan’ cheesecake (which is how pecans made it into the crust) but of course I had to take it a few steps further with a vanilla bean, brown butter and brown sugar. And these might be seen as your everyday baking ingredients but oh my do they come together to make something truly wonderful here.

Let’s be real. Cheesecakes are deceptively easy looking cakes that almost always turn out less-than-perfect. I’m going to give you a quick run-down of how to do this simply but, and I stress, but, follow the directions closely so you have a perfectly smooth and creamy cheesecake. 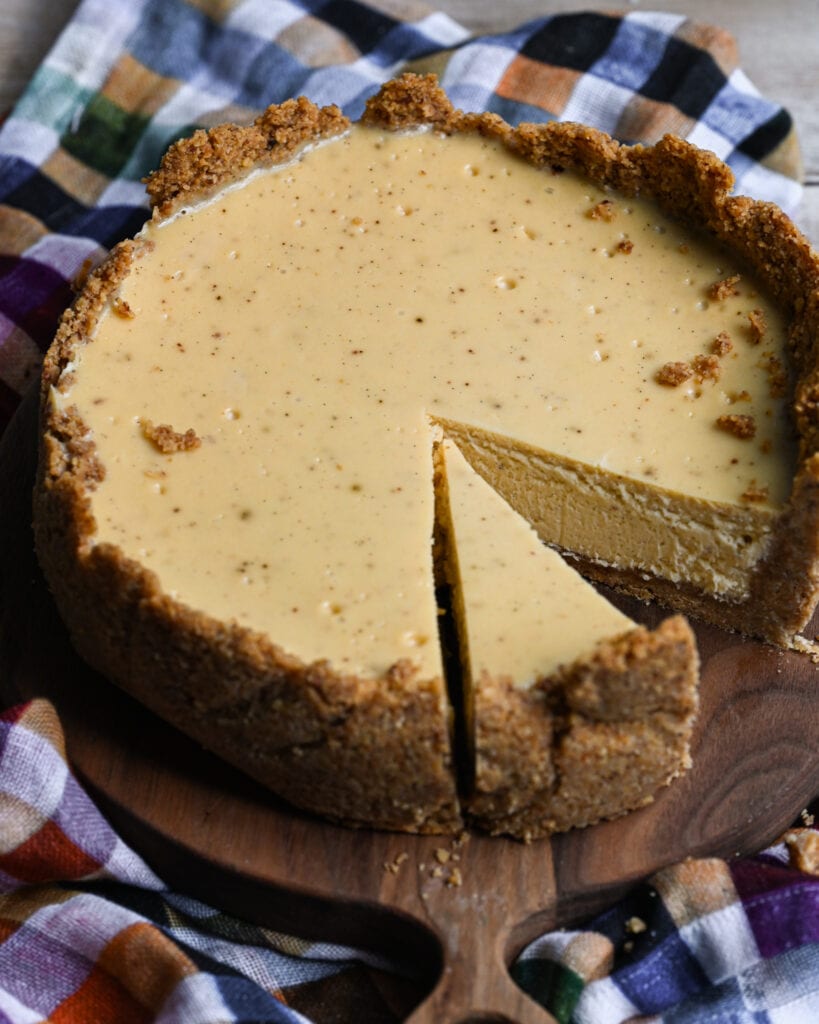 Butter: Unsalted, in a delicate recipe such as this we really want to control how much salt is going in.

Cookie crumbs: You can use digestive cookies (my personal favorite), golden oreos (but remove the cream), or graham crackers. Any cookie that’s crispy and dry will do.

Cream cheese: Philadelphia is my go to brand, it’s thick and creamy and makes a really good cheesecake. Use the bricks, not the ones in the tubs. And most importantly, it should be full fat and at room temperature before you begin baking.

Sour cream: full fat sour cream. You can sub with labneh if you have that instead (I often do this).

Eggs: Large. They should be at room temperature, place them in a bowl of warm water if they are cold when you begin making the cheesecake.

Vanilla bean: you can sub this with pure vanilla extract, 2 teaspoons will do it. Or, if you have vanilla paste use 2 teaspoons of that (it’ll also give you the pretty specks).

Brown sugar: light or dark, but be sure it’s soft and fresh!

How to scrape a vanilla bean

A fresh vanilla bean should be quite soft. This won’t work as well if you bean hasn’t been kept in an airtight container and has gotten stiff.

Lay the vanilla bean on the counter with the seam side up. Use a paring knife (or any small, sharp knife you have) to slice through the first layer. Use your fingers to slightly open the top of the bean. Position the knife sharp side up (so the blunt side is on the bean) and scrape downwards, getting most of the flesh out of the bean. Scrape it onto the bowl where you’ll make the filling, or preferably, straight onto the cream cheese so none of the flesh is lost. 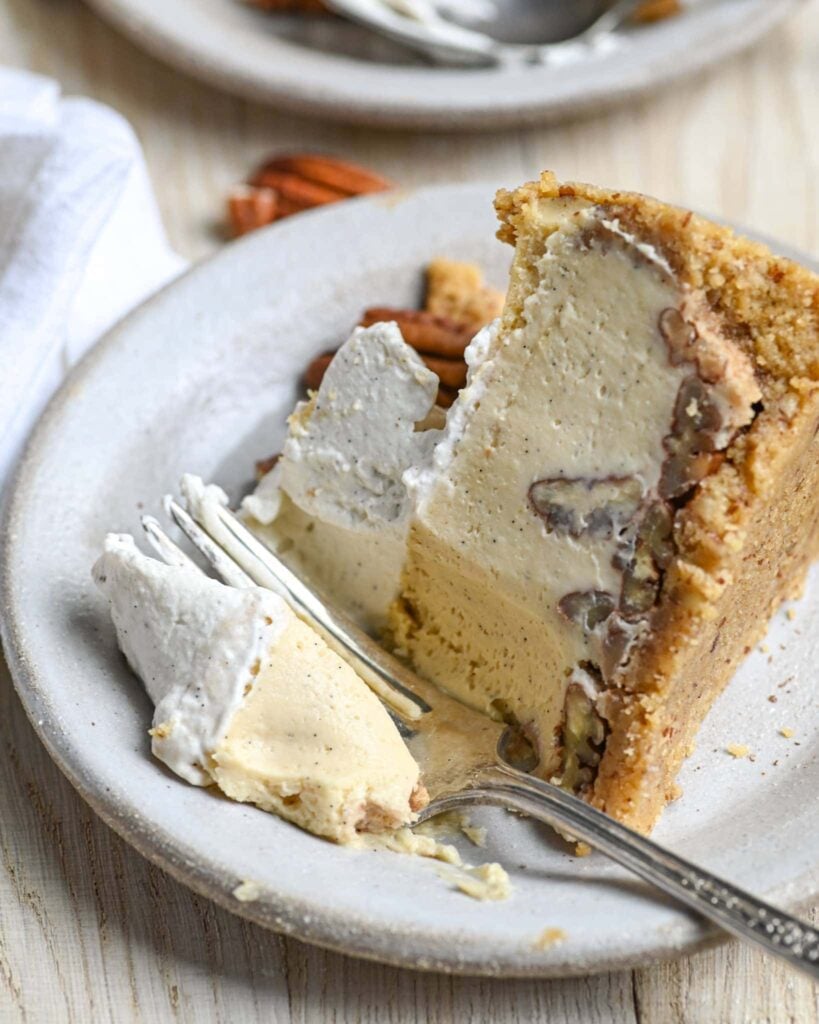 Tips for a perfect cheesecake

Once you have your vanilla bean scraped you may feel like you don’t want to waste the shell as there is still (inaccessible!) seedy goodness. You can add the shell to the brown butter to further extract the wonderful vanilla and infuse it into the brown butter. When you are done browning, simply remove it. A lot of the flavor will now be part of the browned butter. 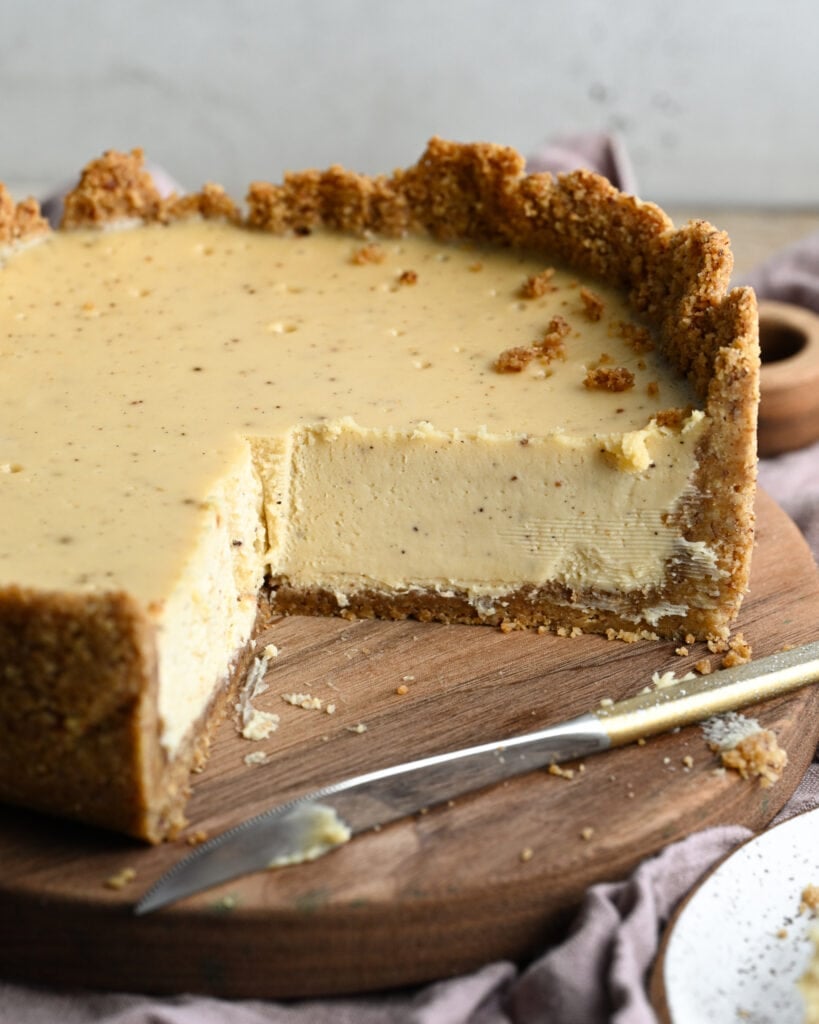 The filling was over-beaten, the cheesecake baked too quickly or cooled too quickly. To avoid this, be sure to beat as little as possible once the eggs are in and bake low and slow, and cool slowly as well.

It might be overbaked. I had a couple in mine as well, but it’s fine if it’s just a few and they are small and scattered.

It might not have been pressed in an even layer on the bottom and up the sides.

It might not have baked enough. The cheesecake will be soft and creamy in the center but it should not be runny.

You have to make it the day before but you can make it up to 2 days before serving day.

I would just up the cookie crumbs to 2 ½ cups instead.

Actually don’t!  As soon as I put this in the oven I knew it was a bad idea but there you go. The nuts turned out kind of gummy as they had baked in a very wet filling. There’s enough pecan flavor in the crust for it to come through. 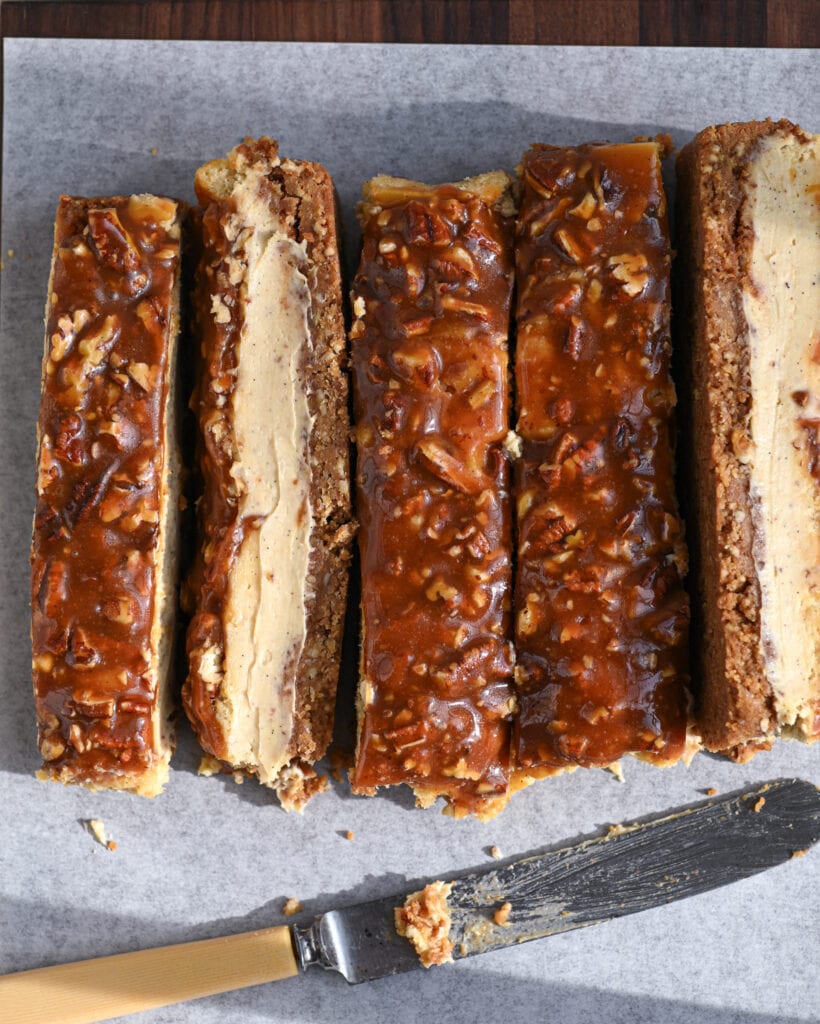 Want to see this made step by step? Here’s a an IG story tutorial. In the video I made bars and topped the cheesecake with pecan praline. Here’s the recipe:

In a medium sized pot, stir together the sugar and lemon juice. Set it over medium heat and cook, stirring and pressing any lumps as the sugar caramelizes. Once it’s all liquid and turns brown (might smoke a bit), slowly add the heavy cream stirring as you pour. It will bubble up, use a long wooden spoon to stir. Add the butter and stir until melted. Turn the heat off and add the vanilla and salt. Once the caramel is cool, add the pecans. Spread it over the cheesecake once the cheesecake is cooled. You might need to rewarm the caramel slightly so it’s spreadable.

Vanilla bean cheesecake made even more wonderful with added brown butter to the crust and filling. 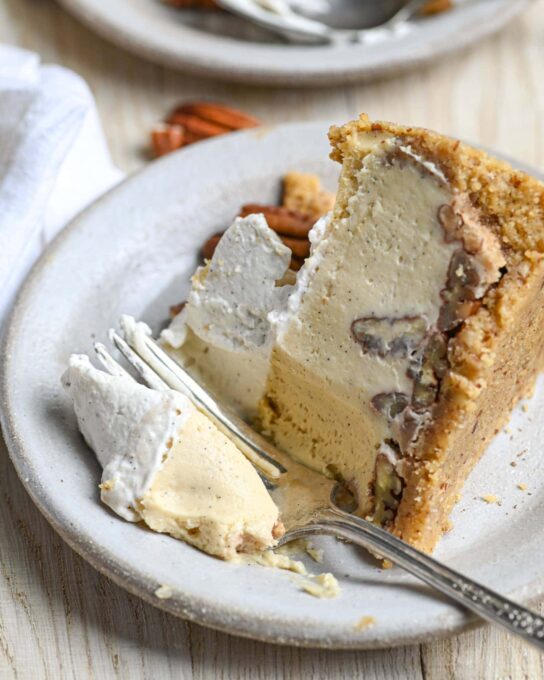 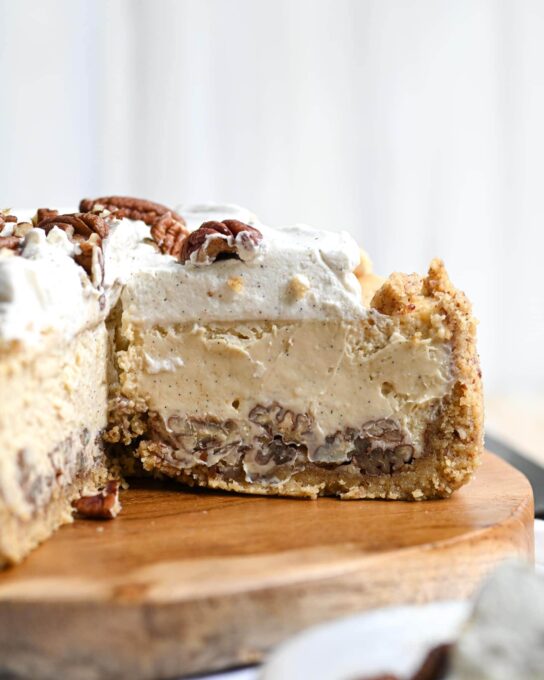