Fluffy and tart, these naturally bright pink marshmallows are bursting with raspberry flavor thanks to fresh puree and some freeze dried powder. Neither gets in the way of the spring of this homemade mallow which is as soft and flavorful as ever. 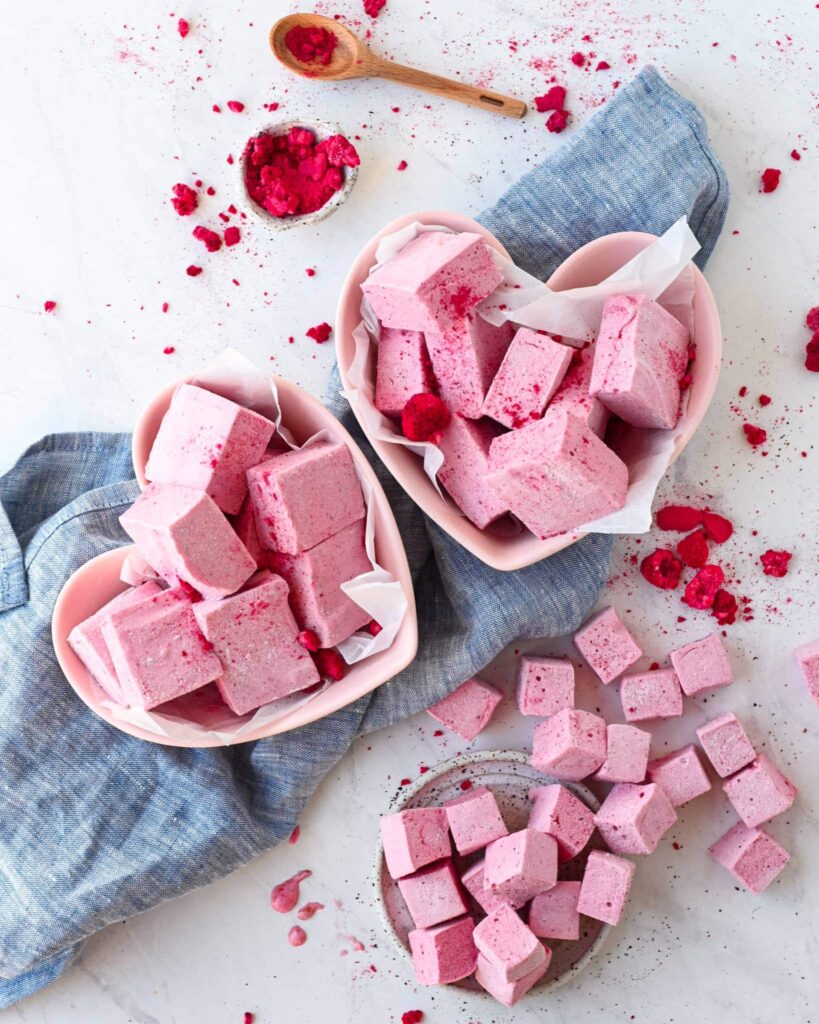 Fluffy and tart, these naturally bright pink marshmallows are bursting with raspberry flavor thanks to fresh puree and some freeze dried berries. Neither gets in the way of the bouncy spring of this homemade mallow which is as soft and flavorful as it could be. 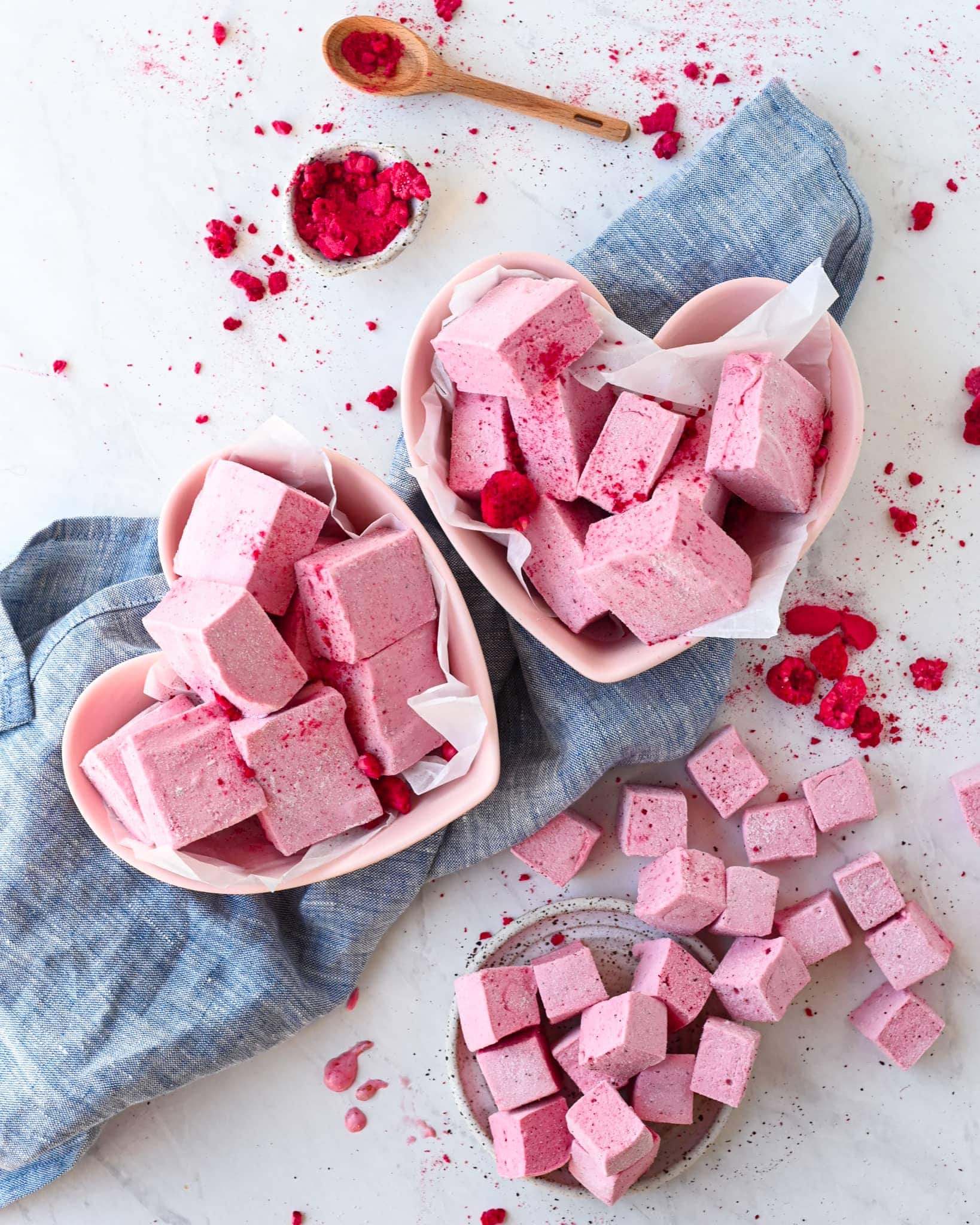 Why these raspberry marshmallows are fabulous

Homemade marshmallows are absolutely, always worth the effort. Store-bought marshmallows (even the ‘gourmet’ ones!) use a ton of sugar and preservatives to keep the marshmallows good for a long shelf life. They are rather disappointing as they are overly sweet and quite firm and dry. On the other hand, homemade, with the right ingredients and right ratios, are super soft, springy and nobody in their right mind would choose store-bought after trying these.

These raspberry marshmallows are exploding with raspberry flavor as they use two different types of berries to drive the flavor home. This recipe does it without compromising the sought-after bouncy texture of a good homemade mallow. 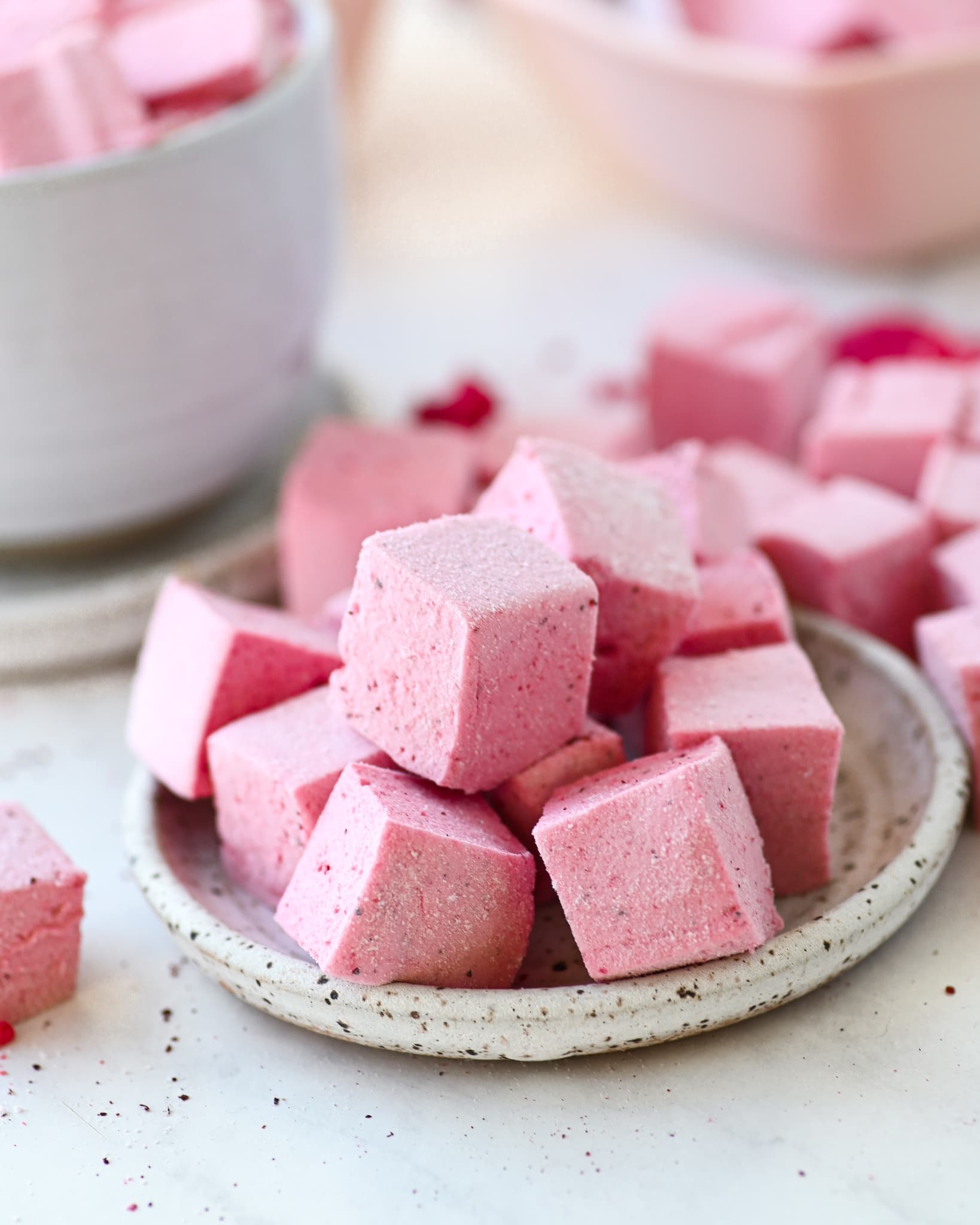 Getting that good flavor into a raspberry marshmallow

The ‘safe’ way of making flavored mallows is to use an extract or oil – something that will lend a lot of flavor without compromising the structure of a soft, fluffy mallow. I personally have never liked using oils in baking, they tend to taste artificial and I love a real, authentic and fresh fruit taste.

So to get there, I begin by using raspberry juice like I did in these apple cider mallows. In those I simply replaced all the water I use in my basic marshmallows with cider, it was an easy swap and the result is fabulous.  However, “raspberry juice” isn’t as easy of a swap but we can make raspberry puree from the berries. I don’s swap it in both parts of the water for the recipe as if we did it in the sugar mixture it would ‘candy’ and taste like jam rather than a fresh berry.

To really zero in on that berry flavor I also use freeze dried raspberries which are intensely flavorful, but because it’s so fine and light, it won’t affect the texture. The result is a potent raspberry flavor! 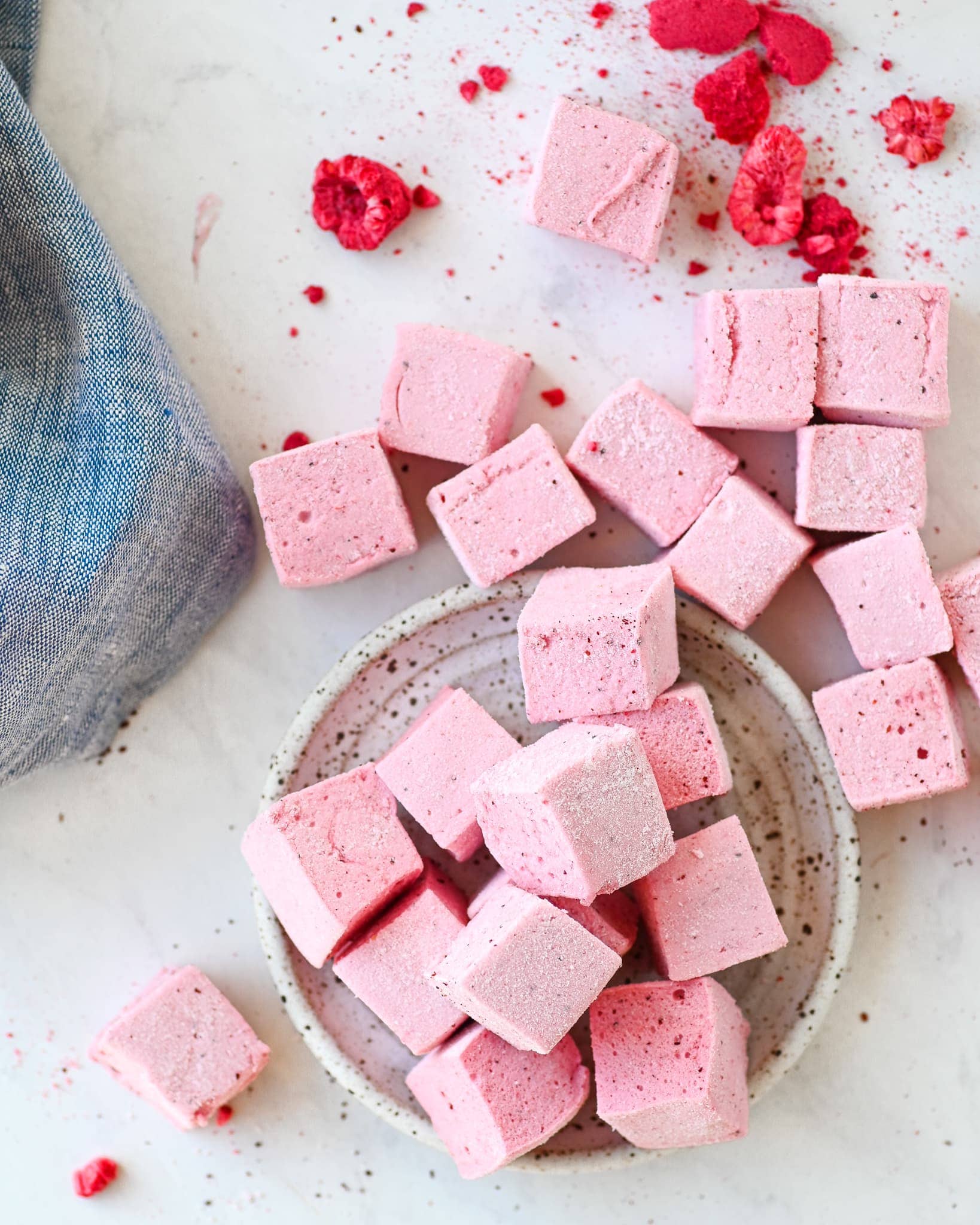 Freeze dried raspberries and frozen are what we’ll use here – not fresh! This is important; both freeze dried and frozen are harvested when the fruit is in season and the berry flavor is at it’s best and when incorporated into a large amount of sugar and air, we don’t want the berry taste to get lost. The gelatin taste which is usually detectable in a basic marshmallow is also hidden underneath the punch of berry. The good news is that using these two ingredients makes the mallows do-able year round! 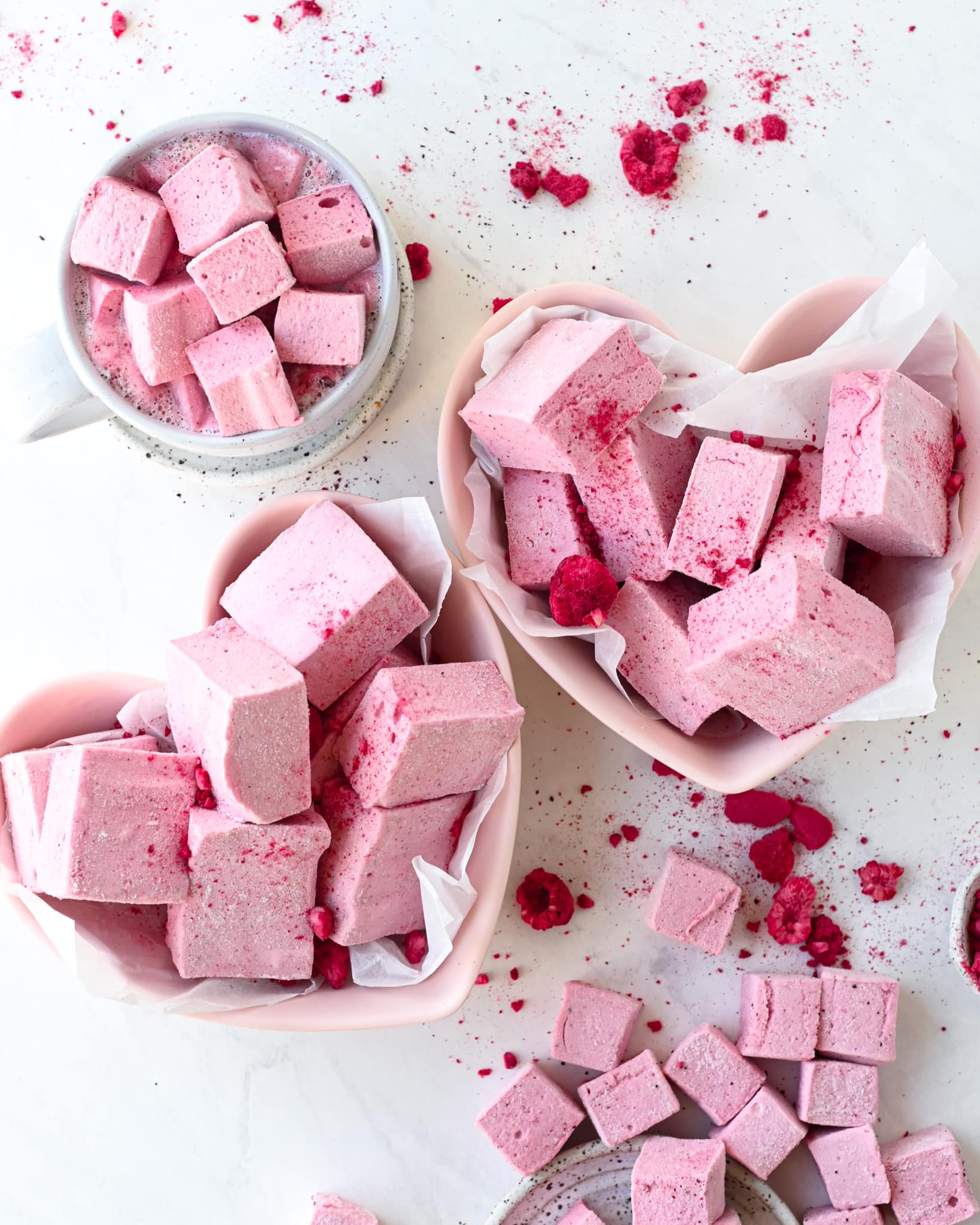 How to make marshmallows at home

You’ll make two mixtures: one with the gelatin and flavorings and the other with the sugars. The first sets while the second cooks until the candy stage (right when it hits ‘hard-ball’). Then you’ll whip them together until the liquid becomes a giant marshmallow fluff. It will need to rest to firm up and then you’ll cut and dust them in powdered sugar. That’s it!

Key points to pay attention to:

Also, use a DEEP POT for the sugar. The honey in my recipe causes the sugar to boil up quite high and can make a mess if the pan is too shallow. 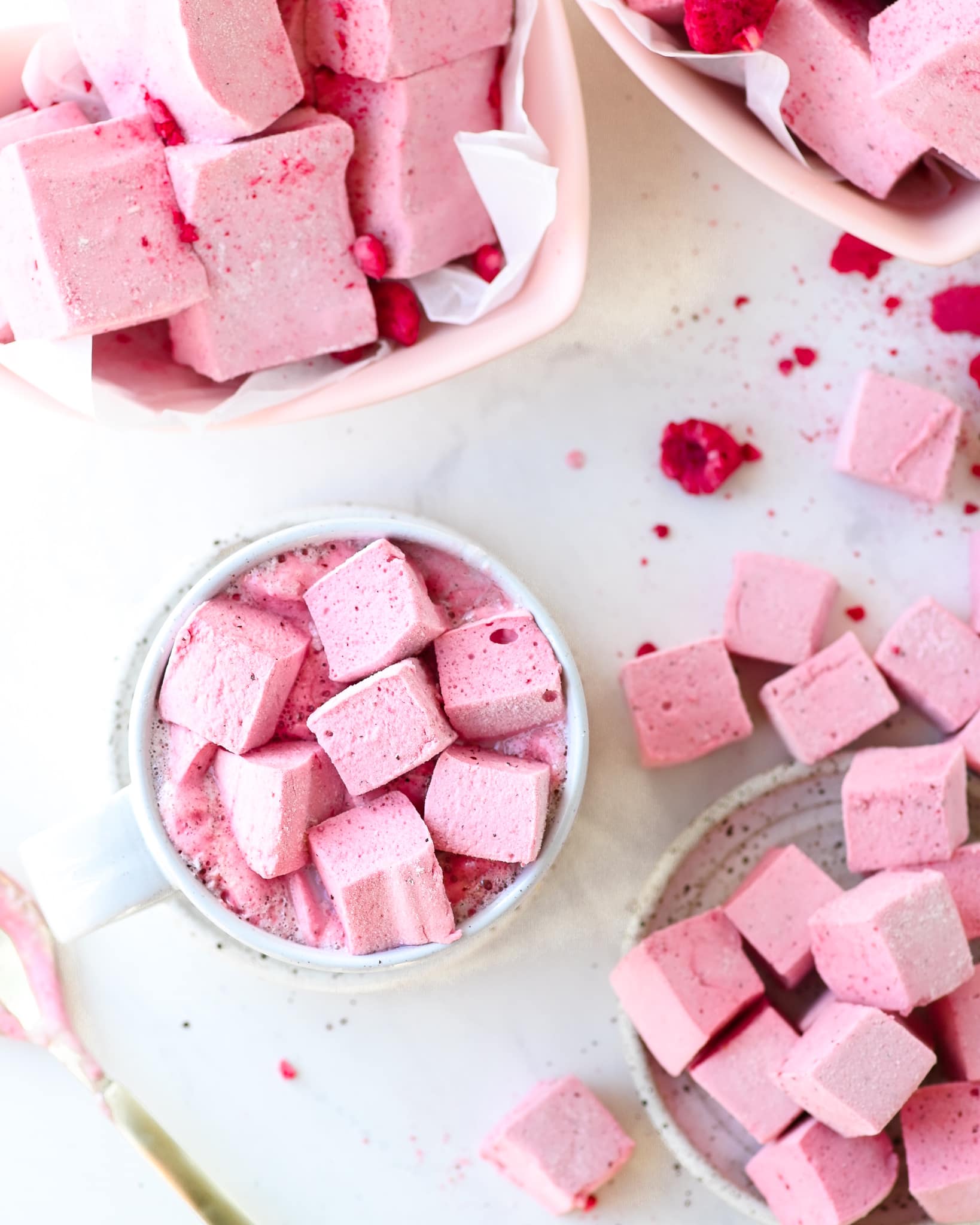 How much gelatin is in 4 packets? What can I substitute it with?

In the US gelatin is usually sold by Knox, it comes in a box with 4 packets for a total of 1 oz or 28g, and it is readily available at most grocery stores. A possible vegan substitute would be agar powder, it does set the mallows firmer than gelatin and you would use half the amount called for in this recipe. I gather that agar also needs to be ‘activated’ over heat before its used but I don’t know enough to tell you how.

Can I substitute with another sugar?

You could use brown sugar, light would be my preference. There is a lot of moisture in these mallows from the puree so we want to avoid weighing them down any more.

Can I reduce the sugar?

No, sorry. The sugar is there for texture and structure not just sweetness.

Can I substitute the honey?

You could use corn syrup.

How do I know when the sugar is done boiling?

Use a candy or instant read thermometer, it should read 250 F.

Where do I find freeze dried raspberries?

Most grocery stores have them near the nuts or dried fruits. Amazon also has tons of options. If you cannot find them, I’d say don’t make these marshmallows as the flavor with just the puree won’t be enough.

How do I know when the fluff is done whipping?

It will look ‘fluffy’ and be pulling away from the sides of the bowl.

Can I make these with strawberries instead? Strawberry Marshmallows!

Can I add any mix-ins?

Yes! you could swirl in some melted chocolate like I do in these brown sugar marshmallows, you could also add some nuts, cacao nibs or chocolate chips.

How should I store the marshmallows?

In an airtight container at room temperature.

Why use organic powdered sugar for the coating?

Organic powdered sugar is usually made with tapioca starch (not corn starch – check the label!) which melts on the tongue. Corn starch needs to be heated to melt and gives the mallows a weird taste. 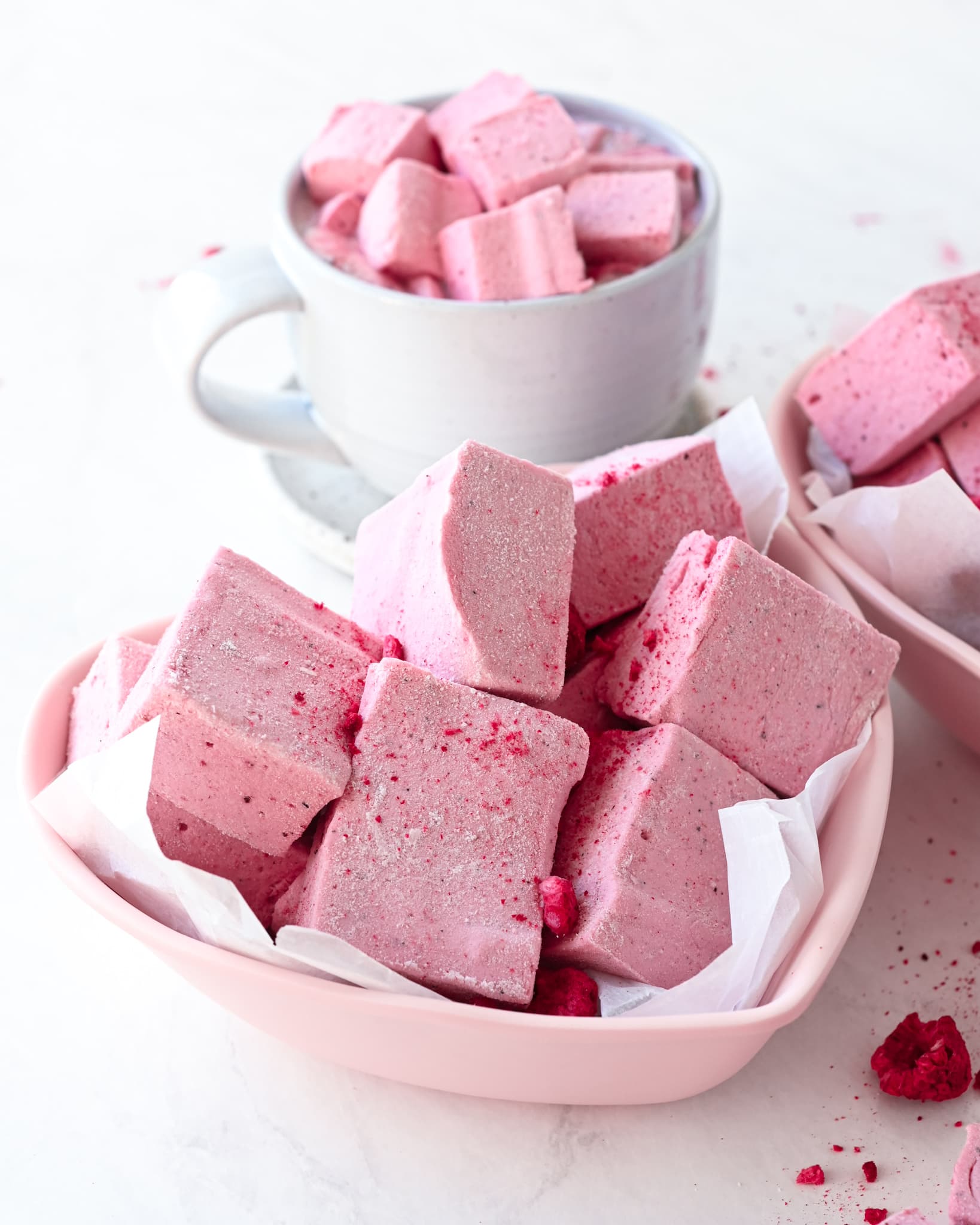 How should I eat these Raspberry Marshmallows?

You can eat them exactly as they are, no other steps needed. But also, these taste wonderful toasted. They don’t hold up well under a broiler or over a grill but if you use a kitchen torch they get all warm and silky. It’ll make your house smell like cotton candy! I also liked them dropped in warm milk or coffee. Or you know, do both (see below). 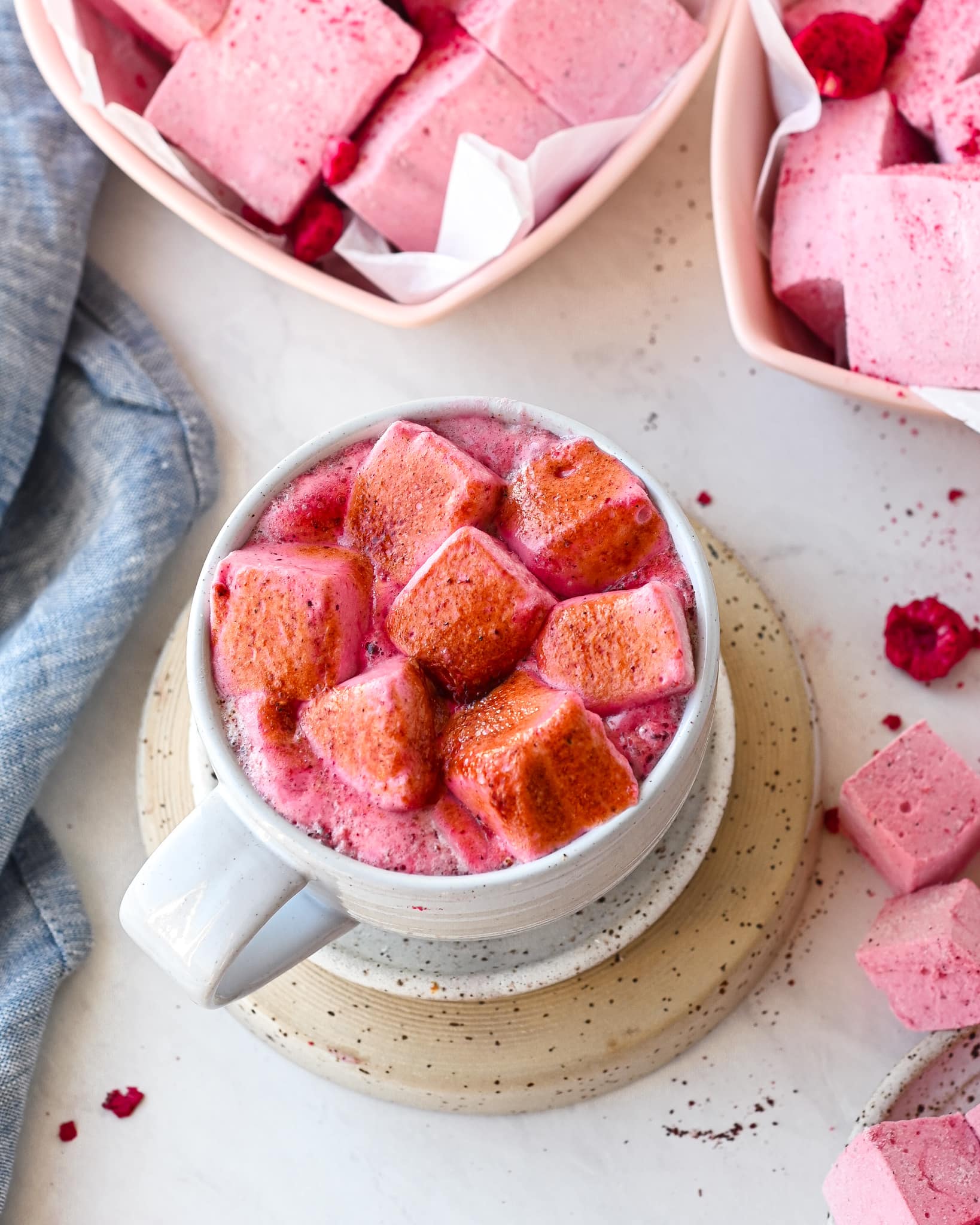 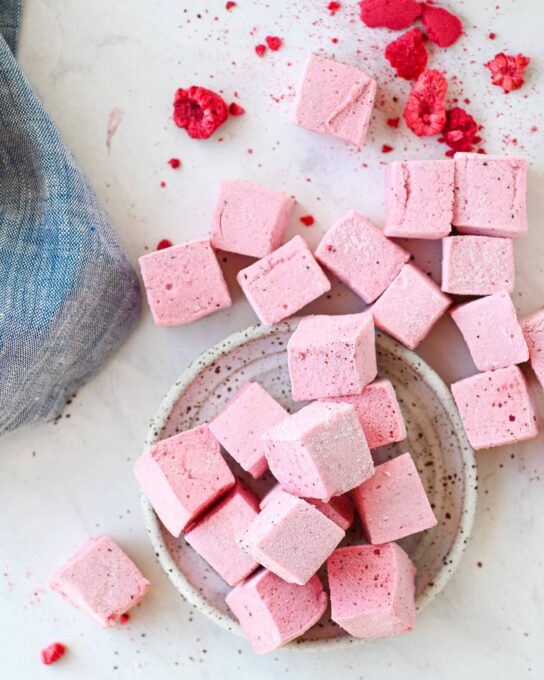 For the sugar mixture:

For the gelatin mixture: 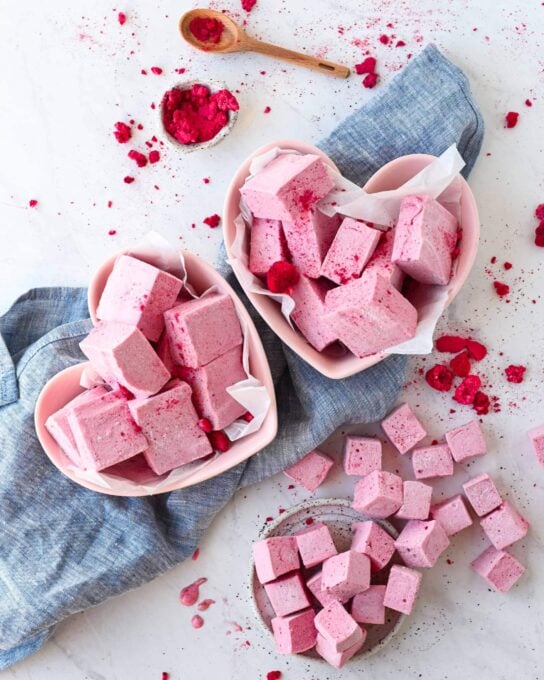