Vanilla bean marshmallow laced with dark chocolate, a layer of salted caramel on the bottom all held upright by a graham cracker crust. 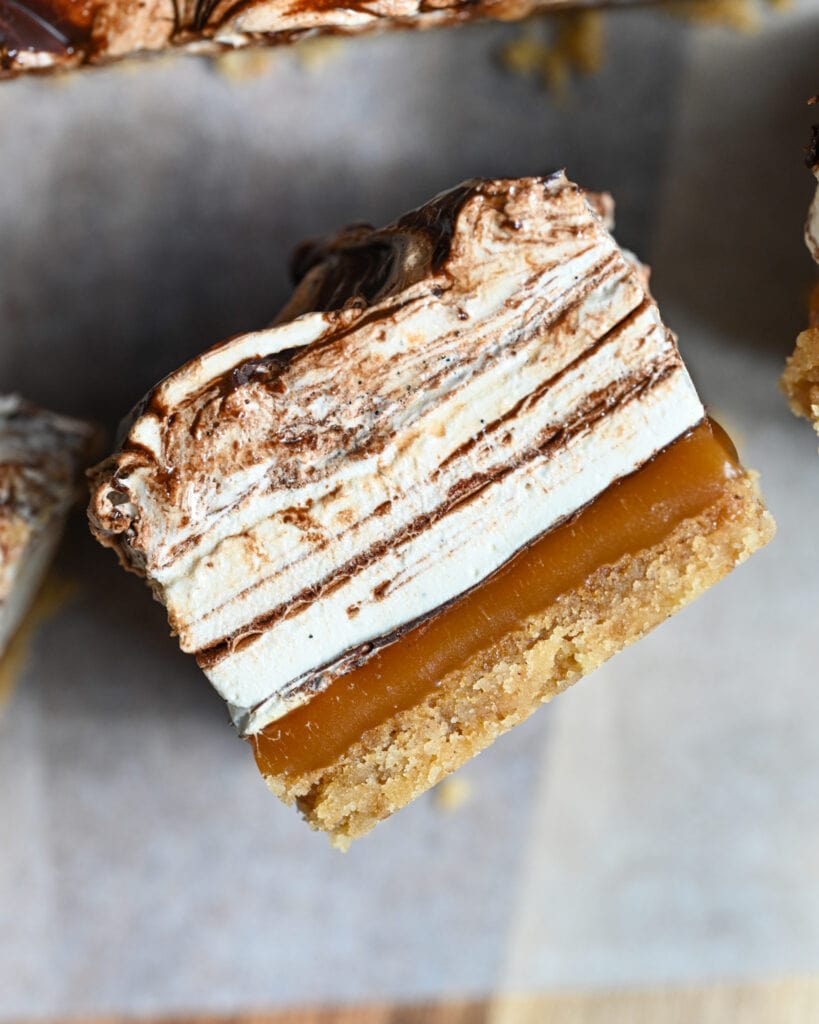 Vanilla bean marshmallow laced with dark chocolate, a layer of salted caramel on the bottom all held upright by a graham cracker crust.

These are inspired by a sweet from my favorite cupcakery in DC, Baked & Wired. Though I’m usually there for the carrot cake concoction, my husband likes to grab anything he spies with marshmallow. So it happens we came home with something they called an OMG Bar one day, and it fascinated me. I couldn’t get it out of my head. You know I love my layers!

Theirs begin with a layer of graham crust, then caramel, then a marshmallow topped with chocolate ganache. I used my own recipes to create the layers as they are in the original but I had trouble getting the ganache to stay put on the marshmallow (it was doing this sliding thing). So instead, I opted to swirl in some dark chocolate like I do in my brown sugar marshmallows.

The result is a bar that’s mostly marshmallow; a special brown sugar vanilla bean one at that, interrupted by layered swirls of dark chocolate, a bit of homemade salted caramel on the bottom all on a basic graham cracker crust. It’s sweet and salty with different textures and flavors, so fun to eat! 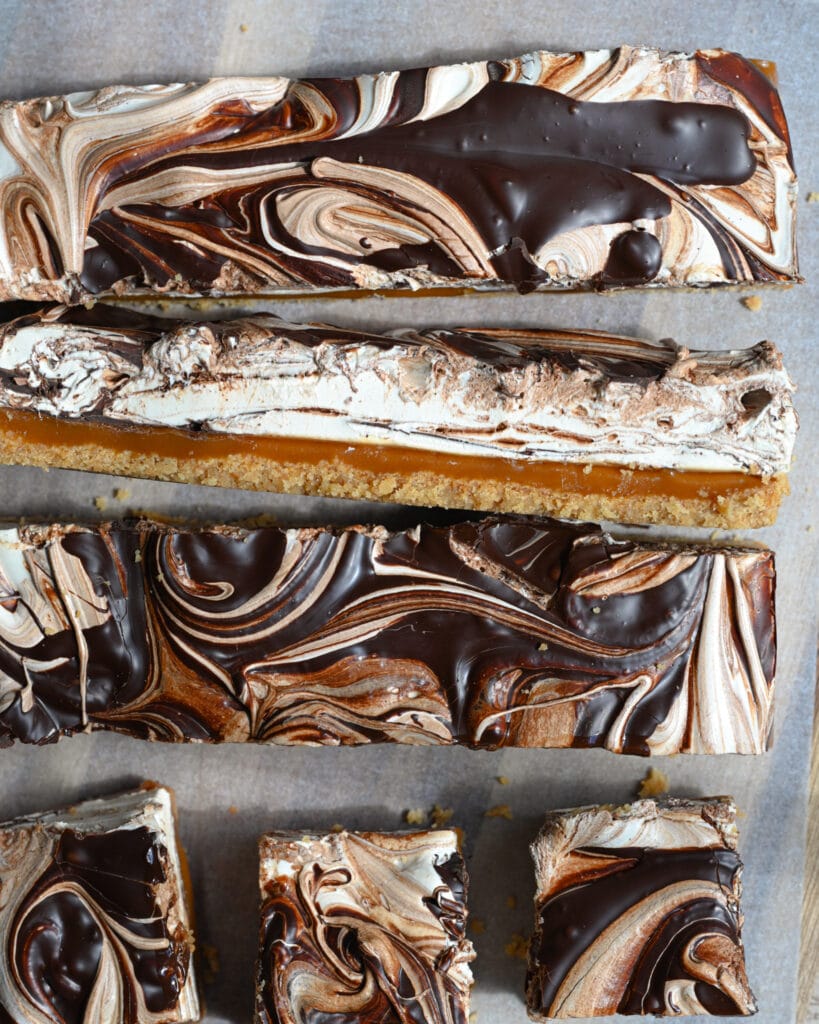 How to make Caramel S’mores Bars

Graham Cracker Crust: You’ll grind the crackers then mix them with melted butter and press into the bottom of a pan. I bake my crusts so they are firm to slice without crumbling, but just for 10 minutes. Simple!

Caramel: I’m using my basic caramel recipe but modifying it just slightly so it will be firm enough to hold up as a layer. We’re using the dry caramel method, so cooking the sugar until it’s melted then begins to caramelize. Once it’s amber colored, add the heavy cream (careful it will bubble up!) then the rest of the ingredients. While it’s warm and loose, you’ll pour it onto the graham cracker layer and then let it firm up.

Chocolate Swirled Marshmallow: Making marshmallows is basically three parts: blooming the gelatin, cooking the sugar, then whipping them together.

You’ll need a thermometer for the sugar; instant, candy or even laser. It’s going to boil until it hits 250 F and once there, pour it into the stand mixer and add the gelatin. Whip until it’s a thick marshmallow fluff. 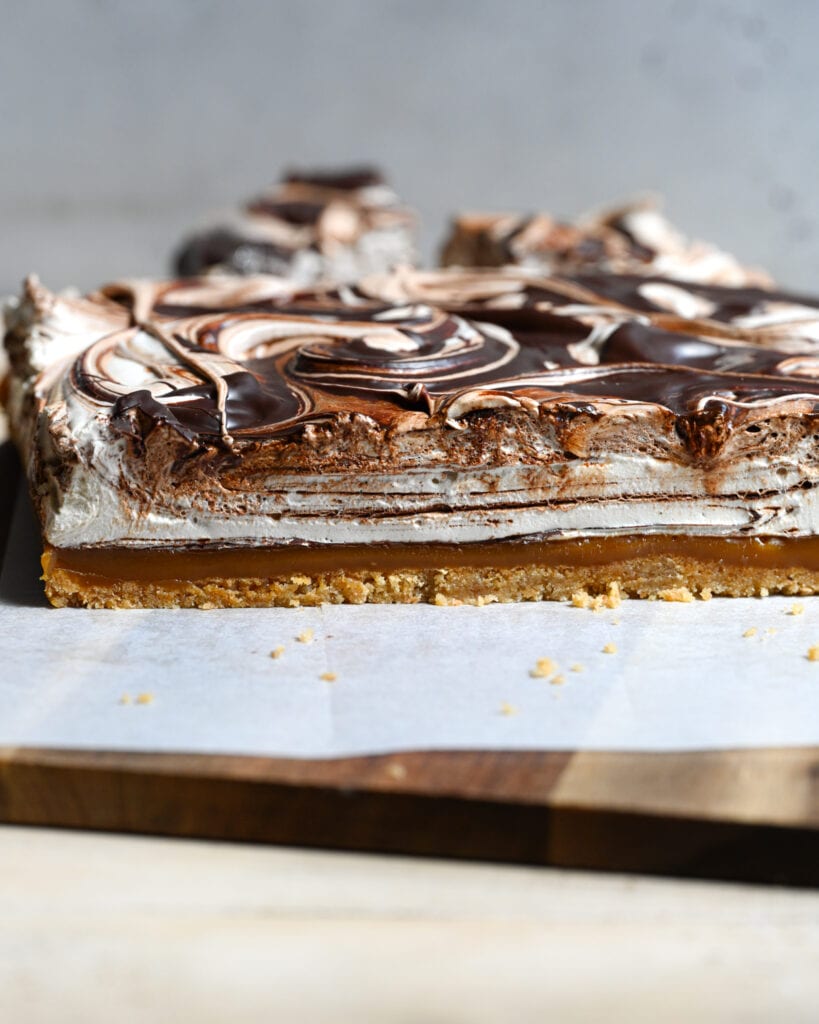 Whether it’s on a brownie, layered between graham crackers and marshmallow, you want a caramel that won’t be too stiff to cut but also not too soft that it will run too quickly at room temperature.

That’s where the balance comes in for this recipe: it’s buttery, well salted and can hold up well under the marshmallow. It has a delightful pull to it (think, mozzarella cheese pull!) and tastes wonderful against the graham crust.

To control the amount of liquid that goes into this (so that it isn’t overly runny) I use the dry method: cooking sugar until it melts and caramelized without water. I add a few drops of lemon to the caramel to protect it from crystalizing (which can easily happen with the dry method).

For bars, especially ones that are going to be sweet up and down, I like to cook the caramel to a darker hue which deepens the flavor and helps firm it up. 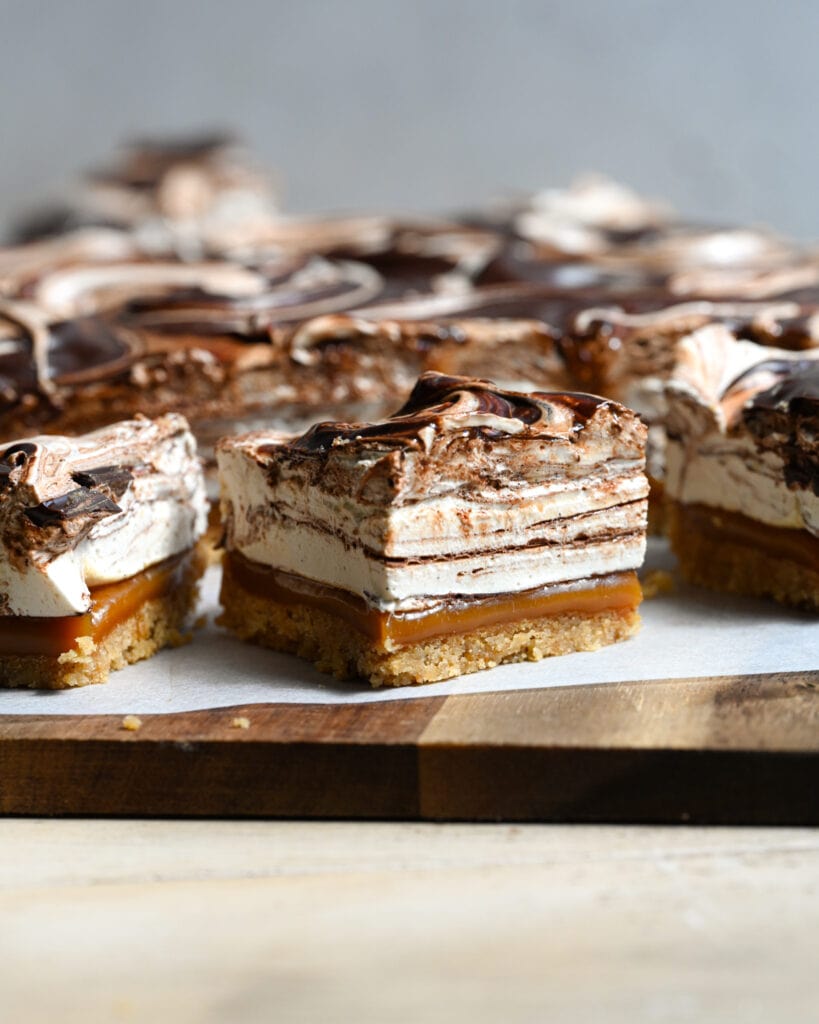 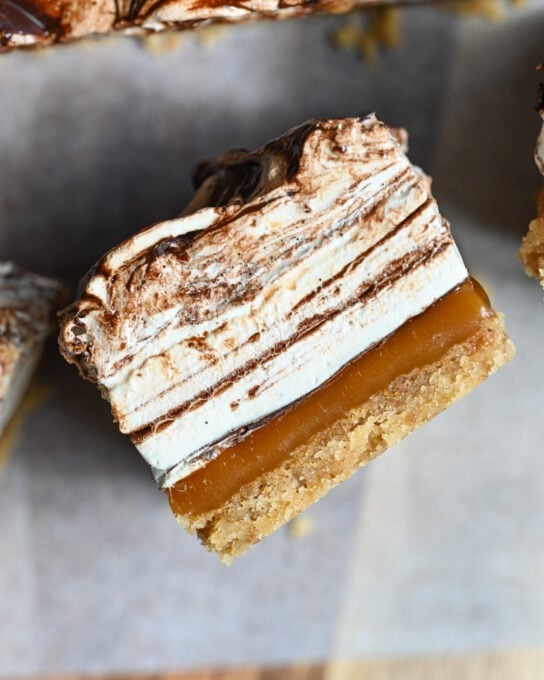