Sweet, tangy and toasty flavors meet in this super creamy cheesecake. White chocolate is toasted to a deep flavor and combined with a cream cheese filling; it’s a deceptively simple process that requires no expertise. 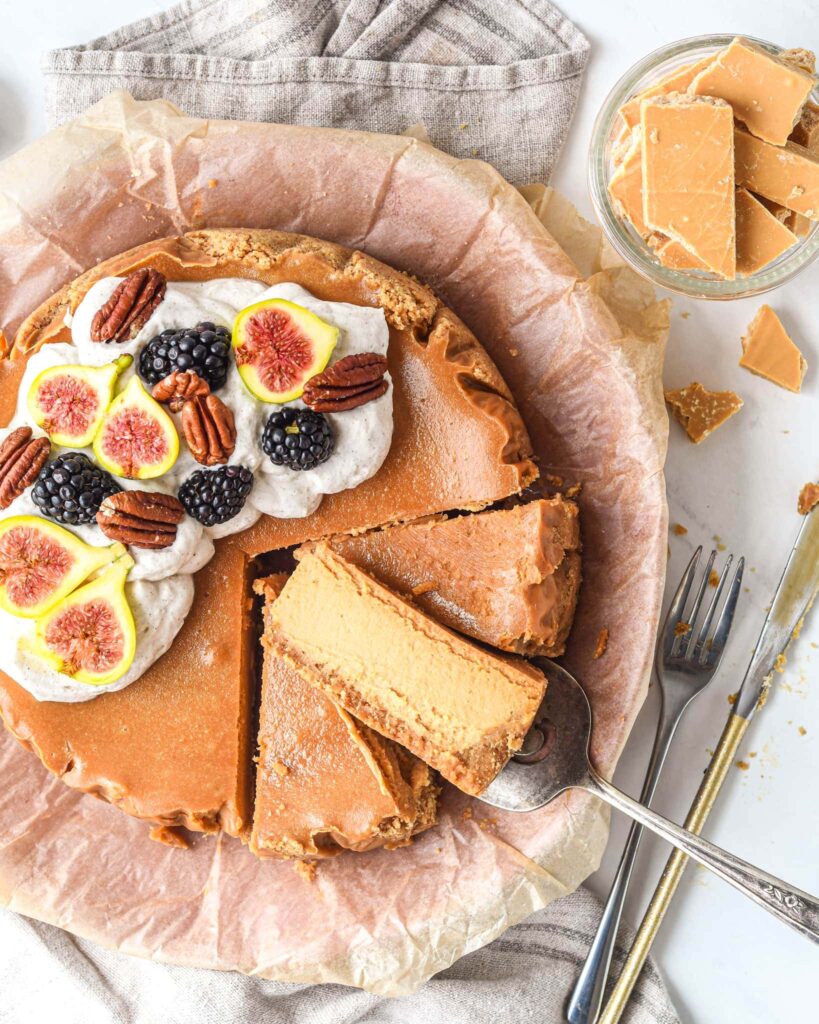 Sweet, nutty flavors meet in this super creamy cheesecake. White chocolate is toasted to a deep flavor and combined with a cream cheese filling. A deceptively simple process that requires no expertise. 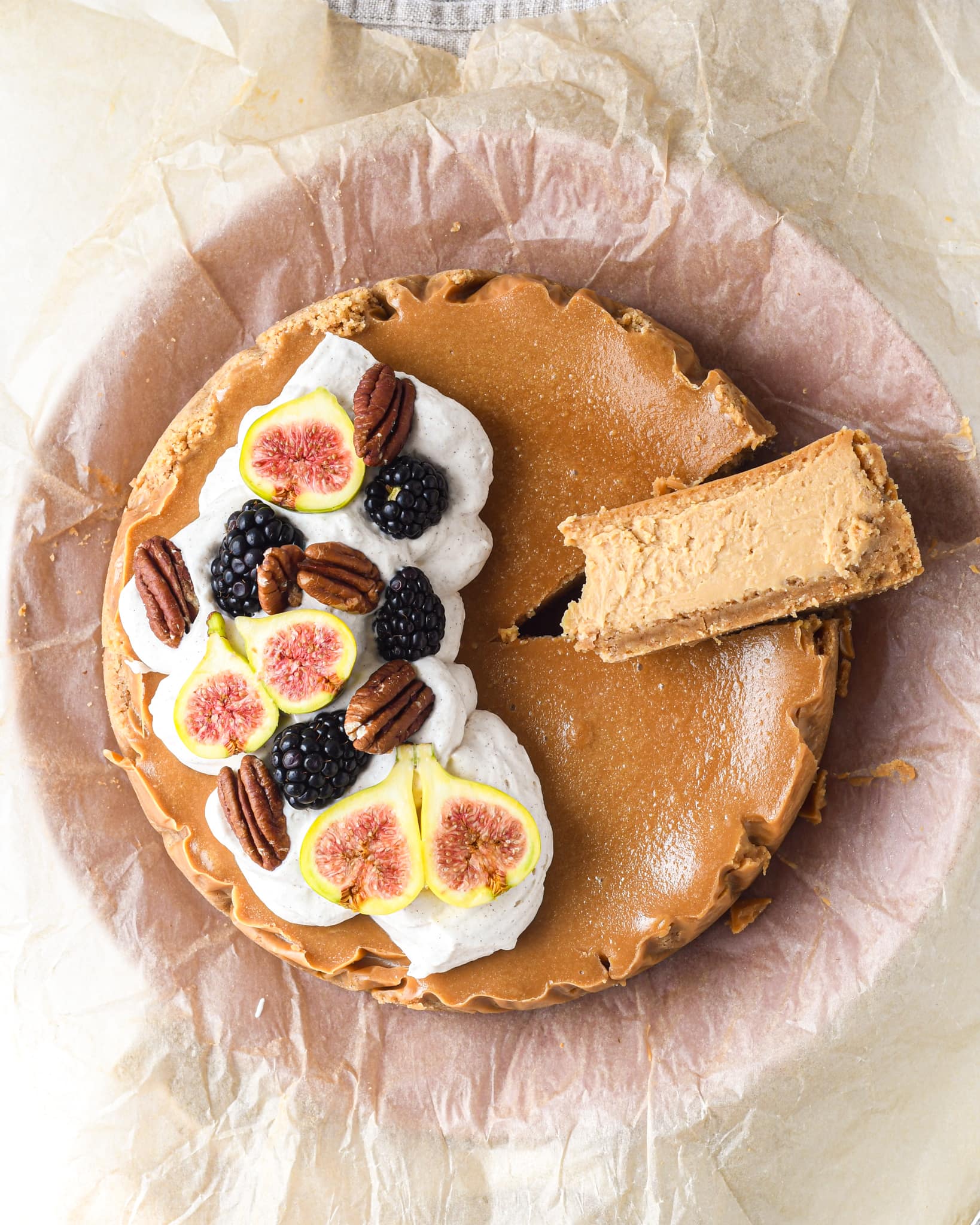 Sometimes called ‘blonde’ chocolate, caramelized white is relatively new to many. It was invented (by accident!) in 2006 by a chef at Valrhona chocolate. The chef discovered that cooking white chocolate on low heat for a long time produced a chocolate that was darker, less sweet, and had a deeper, more complex flavor profile. The toasty flavor is so heavenly that I’m betting that even if you aren’t a white chocolate fan you will want to gobble this up by the handful. And the best part is, you don’t have to be a chef or a fancy baker to make it! 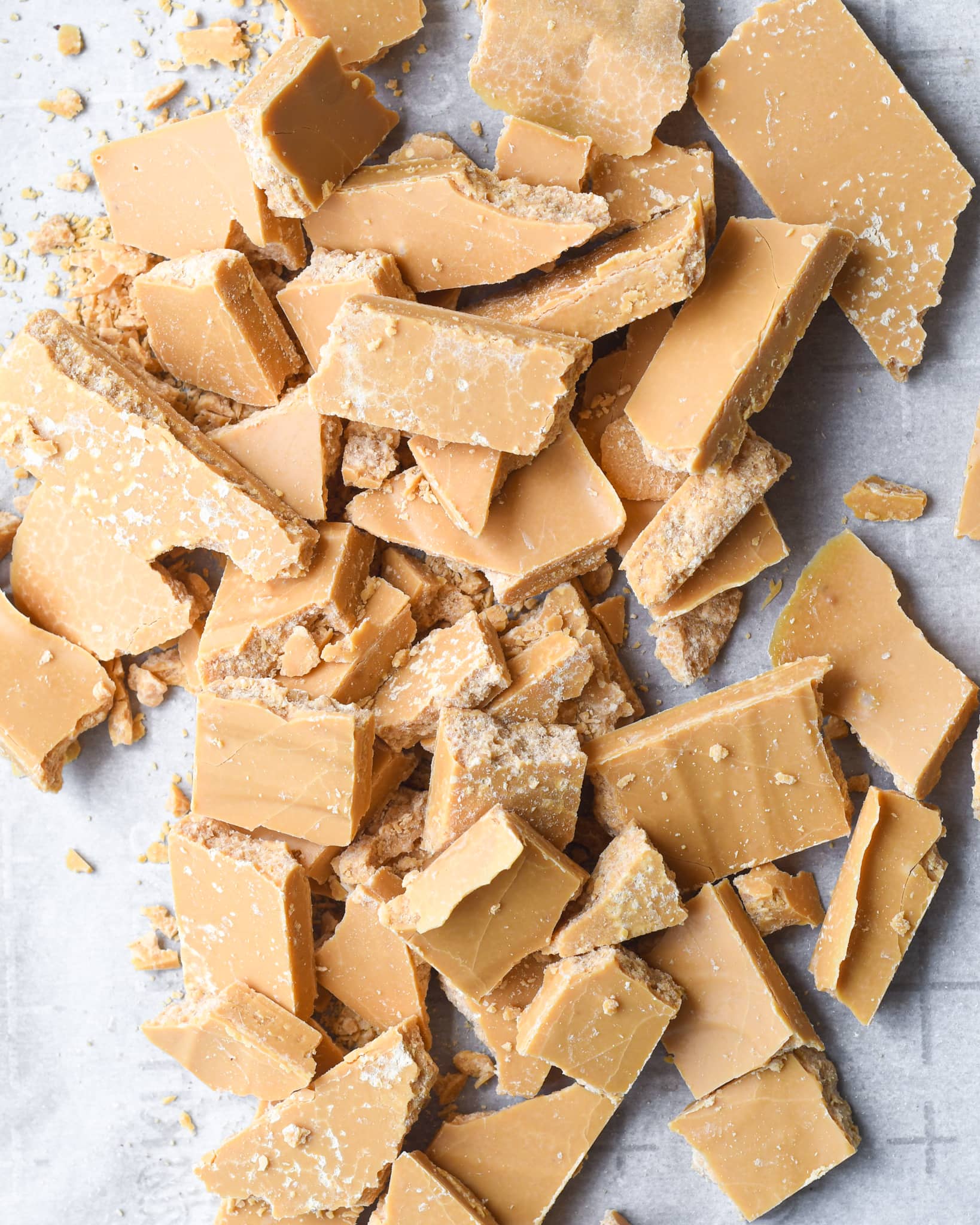 How to make Caramelized White Chocolate

The first time I made cwc was at least four years ago and I was convinced I was going to burn it and it was going to be a horrible process. I fussed over the oven, turning it every 7 minutes and took it out too early. The truth is, caramelizing it essentially means cooking it on low in the oven for about 45-50 minutes; and you only need to turn it about 4 times (so every 10-15 minute mark).

The turning process is the most important; essentially the layer that touches the pan is what’s caramelizing the quickest. Every time you go into the oven to turn it, you’ll see a darker layer on the bottom. The goal is to reveal this darker level and turn the chocolate that hasn’t yet caramelized. Once you’ve done this, smooth the chocolate out and return to the oven.

For step by step photos on caramelizing, see this recipe for brownie cookie with cwc chunks. I show the process at every 10 minutes in that series but like I said above, you can do every 10-15.

If you aren’t making a lot of caramelized white chocolate, it’s easier to do on a silpat mat on a large cookie sheet. The silpat keeps it from sticking. For bigger amounts I use a very clean cake pan (no oil residue) without any mat or baking paper.

To turn the chocolate as it caramelizes, a rubber spatula that won’t scratch the pan is best. To smooth it over into one layer, an offset spatula works well.

When should I caramelize the chocolate?

I do mine in massive batches (like seven or eight 4.4 oz bars at a time) and keep it around the house for multiple uses (see below). If this cheesecake is your sole purpose for making the cwc, I’d make it at least 24 hours ahead of time. Once the chocolate is solid, you can re-melt it and make the ganache for the cheesecake.

What kind of chocolate should I use to caramelize?

A high quality, eating chocolate. The most important thing to consider when choosing which chocolate to caramelize is the cocoa butter. Too often you’ll find a mix of oils and sugar under the guise of ‘white chocolate’ when really, nothing from the cocoa bean actually went into the product. Check the ingredients and look for a high percentage of cocoa butter. Personally, I always use 4.4 oz lindt white chocolate bars.

What else can I use Caramelized White Chocolate for?

You can add it to cookies in place of chocolate chips or chunks like in these chocolate sables, or these rye brownie cookies. I also have a swiss meringue cwc buttercream recipe and a more basic American style cwc buttercream. Here are some cwc fudgesicles that taste like the frozen version of Werthers caramels (but better!). Also, it makes a wonderful ganache to top off these double chocolate babka rolls. But one of my absolute favorite ways to have cwc is paired with apple cider baked goods; I’ve used it as a ganache topping for my apple cider cheesecake and as chunks in my apple cider caramel ice cream. The list is endless!

What if I don’t want to caramelize the chocolate myself?

You can buy it, available from Valrhona in feve or baking bar form under the label “Dulcey” although the flavor of homemade cwc is better and stronger because it doesn’t undergo as much tempering, even if it’s dry and crumbly.

Tangy and sweet meet in this glorious dessert. I’ll warn you, it is rich and decadent! A true treat! To come up with this recipe I followed the formula of my pistachio cheesecake and my apple cider cheesecake recipes; a mix of cream cheese and sour cream for the filling which I find gives me an ultra creamy interior.

To keep that creaminess but incorporate the chocolate, we’ll first make a ganache with the chocolate and some heavy cream. Once cooled, this is added to the filling.

Because so much of the sugar is coming from the chocolate, I really cut back on the added sugar. Part of me thinks you could skip it entirely but I haven’t tried doing that yet.

What pan should I use for baking the cheesecake?

I know it’s traditional to use a springform pan, but ugh I just didn’t want to deal with worrying about leaking; especially with the water bath. I baked this cheesecake in an 8 inch cake pan which was oiled and then lined with parchment paper and stuck it in a larger cake pan filled with water. Even if I didn’t have super straight sides, my cheesecake baked perfectly and was not at mess at all. And tbh, I quite like the ruffly bits I get on the sides; they add such a pretty look!

To do this, first you need the right ratio of cookie crumbs to butter. I find 9 oz of crumbs to 4oz of butter works well. I use digestive cookies but you can also use graham crackers, nilla wafers, or oreos. For the oreos I would remove the cream first, then weigh and grind them.

Secondly, pre-baking the crust is what will solidify it. This allows the butter to bind with the crumbs under the heat. It only needs about 10 minutes in the oven but this step is crucial. When the crust comes out, let it cool to room temperature. If you have time, stick it in the freezer for it to further solidify. The below photo shows my crust post-bake.

How to make a creamy cheesecake 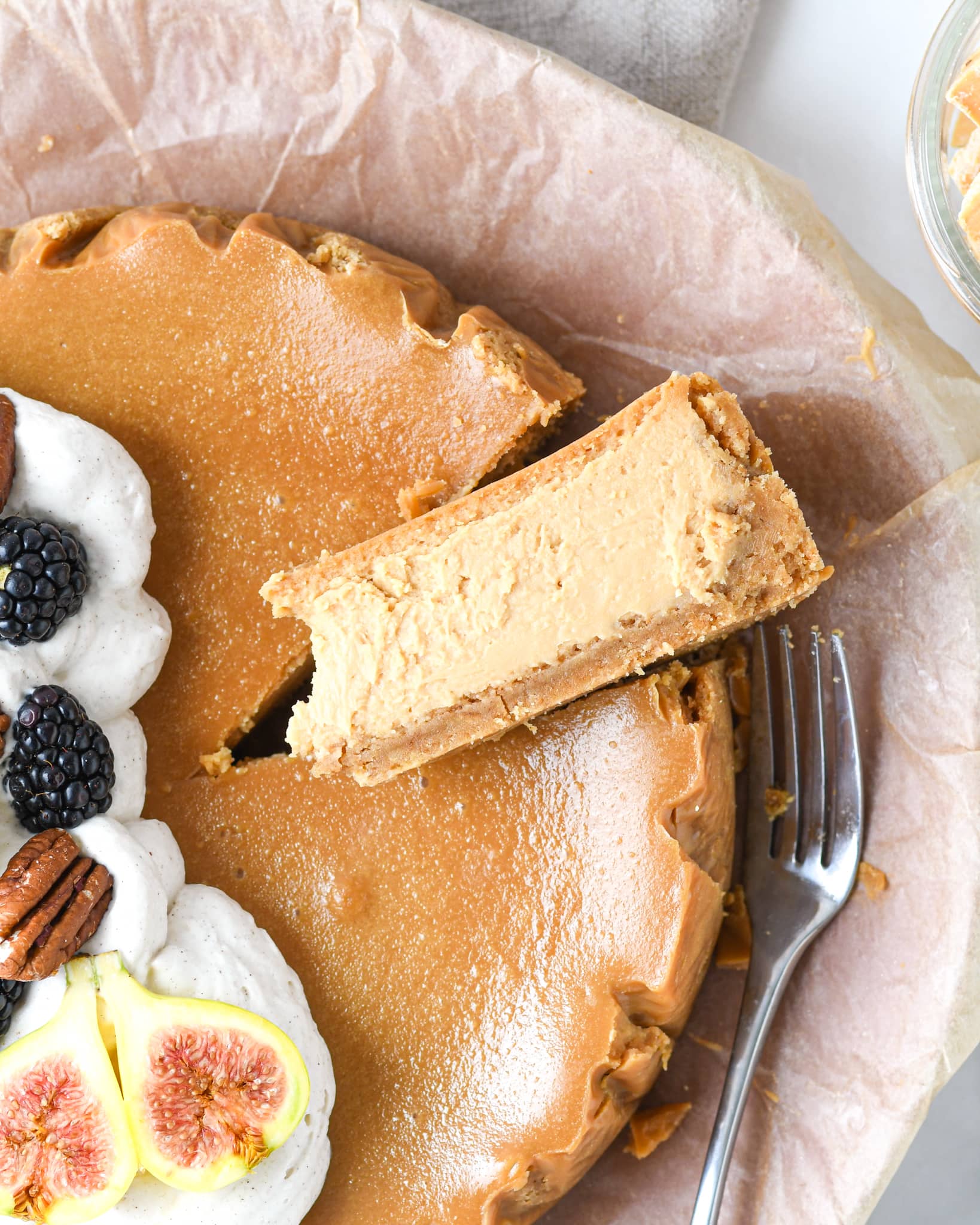 Sweet, nutty flavors meet in this super creamy cheesecake. White chocolate is toasted to a deep flavor and combined with a cream cheese filling. 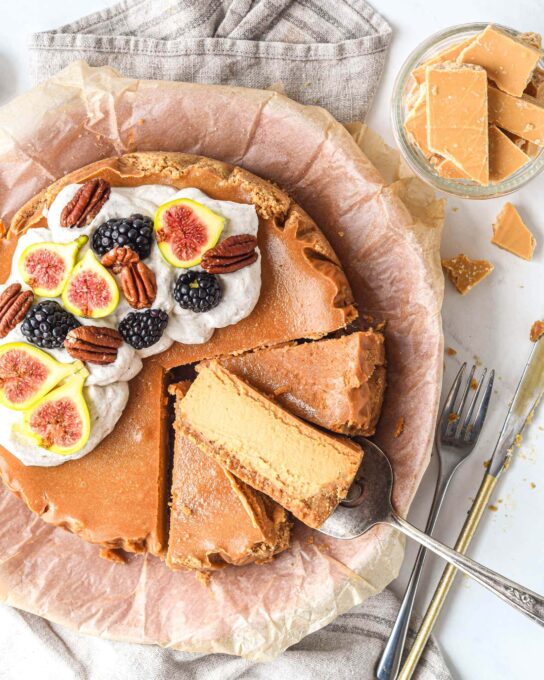