A rich chocolate bundt cake with a tight, dense crumb and a gorgeous rainbow surprise inside! 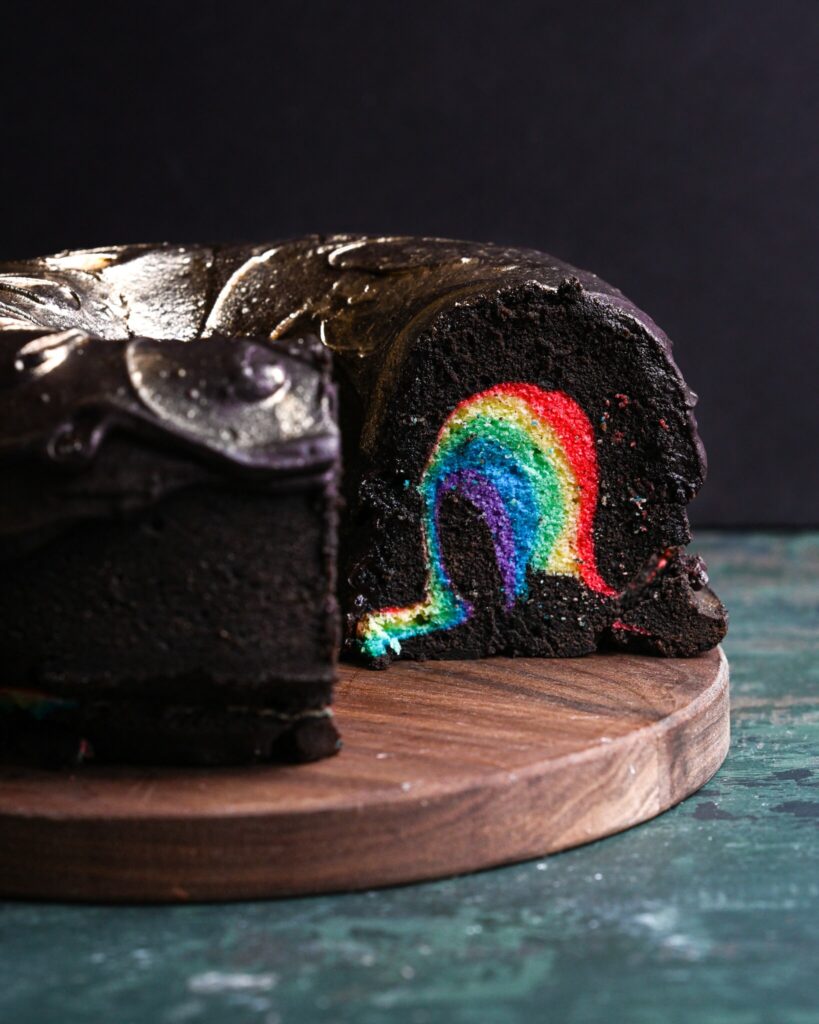 The chocolate version of my hidden rainbow cake: A rich chocolate bundt cake with a tight, dense crumb and a gorgeous rainbow surprise inside!

I’ve made the vanilla version of this cake countless times for my now 5yo daughter. She almost always asks to top it with a dark chocolate glaze but to date I haven’t been able to bring myself to do it (I’ve always wanted something more classic or colorful to match the interior, esp since we have chocolate in almost everything else!).

For Christmas our 2yo was gifted a kids book about the science of rainbows and we learned that there’s such a thing as a moonbow (!)… a big gorgeous rainbow surrounded by a dark sky.  Immediately I thought to do a moonbow version of the cake by *just* coloring the outside. I could dye it a dark color, but cocoa is my favorite food coloring, for obvious reasons. Of course, it turned out it’s been done before, but ours is a homemade, from scratch, totally delicious version. Plus that signature sam arch! And here was an opportunity to give it the chocolate glaze she wanted.

I ended up making this one for st Patrick’s day and it was the ‘pot of gold’ at the end of Lily’s annual rainbow treasure hunt. Everyone happily devoured it. I know there are some little ones out there who would also love this, so I wanted to share it here too. 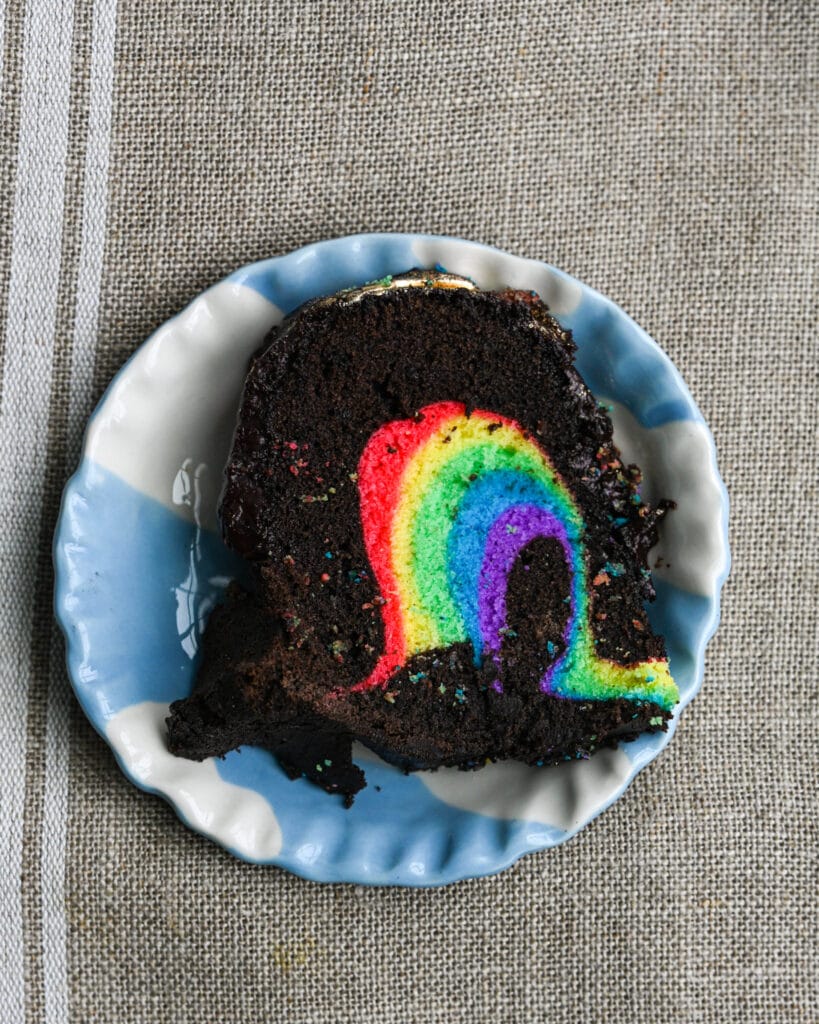 Cake Flour: Made of a finely milled wheat and mixed with cornstarch this will gives us a very tender crumb.

Coconut Oil: This is to replace some of the fat lost from removing the egg yolks. Unrefined does not have the coconut taste so it won’t bother you here.

Dutch process cocoa: You could also use black cocoa but absolutely avoid using natural here as it will mess with the chemistry of the cake (natural cocoa is acidic). Use a good quality cocoa with a higher fat percentage (Guittard Rogue or Ghiradelli Dutch are both have 20-22% fat content, which is ideal). Low fat cocoas will make the cake rather dry. Read here for more info about cocoa fat.

Food coloring: Gel colors are best but the wilton water based ones are pretty great too.

Kefir or buttermilk: I use these interchangeably but if the kefir is very thick I might water it down slightly so it has the consistency of buttermilk. Milk and lemon/vinegar is not a good substitute as it’s often more acidic than buttermilk and a lot less creamy. 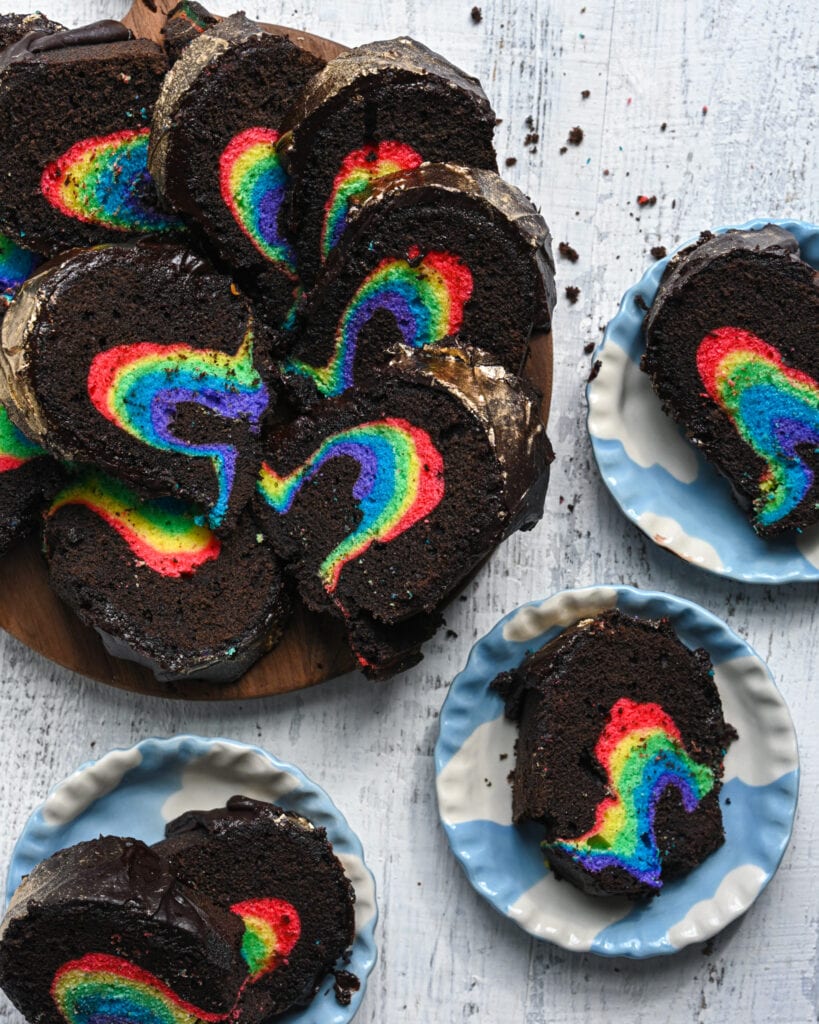 The first step is to make the batter: we’re going to make a white cake batter much like we do in the original hidden rainbow cake.

Beat the sugar, oil and butter really well together. It should be very light and fluffy – about five minutes. Add the salt, leavening and vanilla in this step.

The egg whites go in one at a time, allowing each to fully incorporate before another. Sift over the cake flour and add most of the buttermilk (save 20g). Beat to combine.

Then separate the batter: you want a heaped ⅓ cup in five small bowls, these will be your rainbow colors. And with the remaining batter in the mixer bowl, add the cocoa, remaining buttermilk and an egg yolk. Cocoa dries out a batter so we’re adding these to make sure it stays nice and moist.

Building the rainbow: Most of the chocolate batter goes straight into the ring mold, you’ll reserve just enough to cover the rainbow part.

Once you have the rainbow colors in piping bags, begin piping the red into the cake pan, making a big ring in the center – leaving just enough space on the outside so you can see the chocolate batter. Flatten it out with the back of a spoon then do the orange, making sure that you can see the red on either side. Each ring decreases in width so when it bakes they rise up and surround them to form the arch.

Once the purple is in and flattened, add the rest of the chocolate batter – carefully so as not to mess up the rainbow. Make sure it goes all the way out to the sides and completely covers the rainbow. Then, bake! 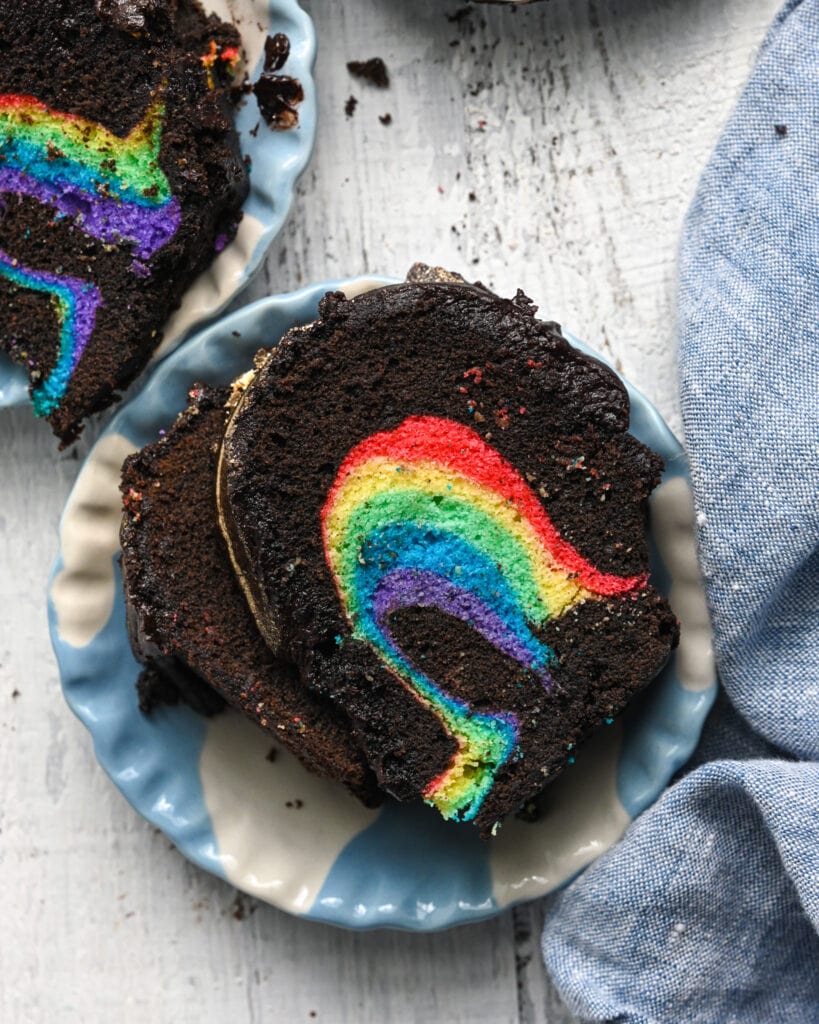 Note: You need a bundt pan or ring mold for this cake. I use this 9″ ring mold. Best to use something with a curve on the bottom so that you can get a nice arch.

A rich chocolate bundt cake with a tight, dense crumb and a gorgeous rainbow surprise inside! 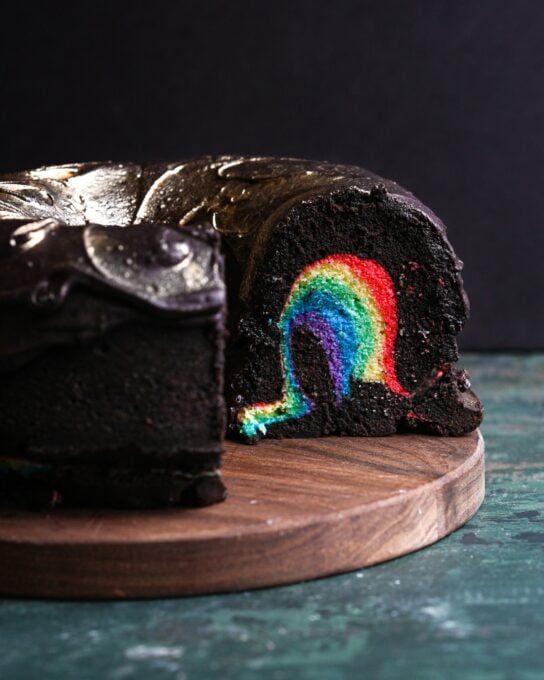