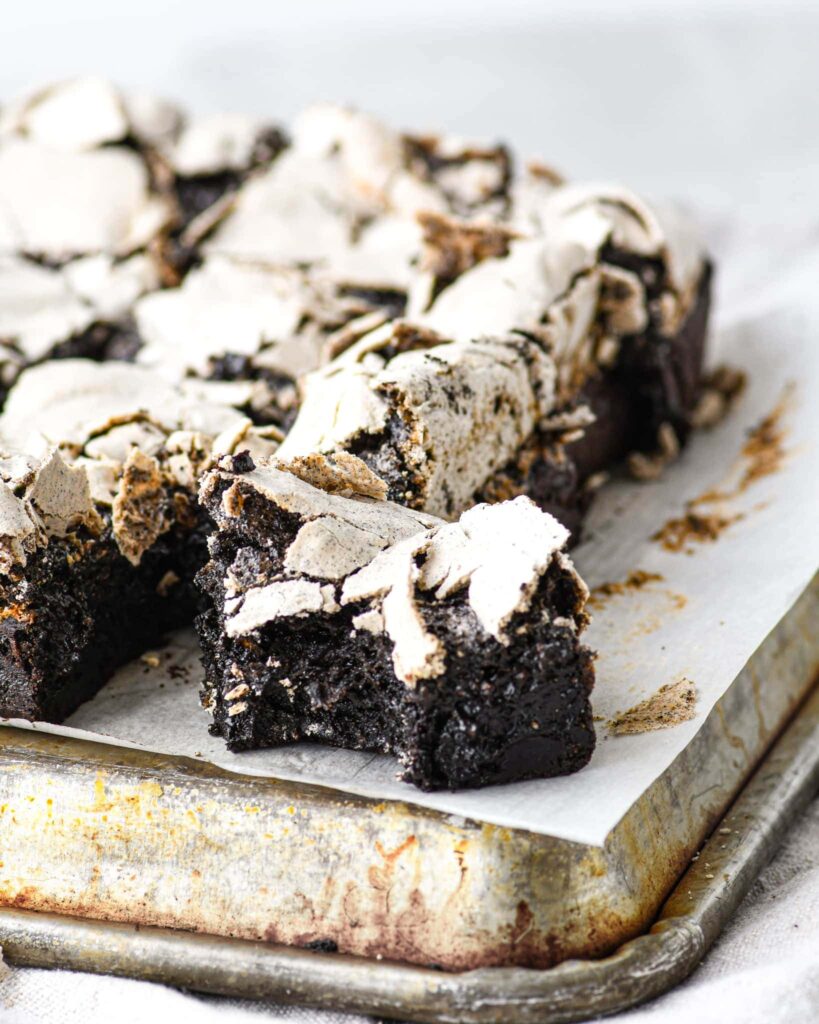 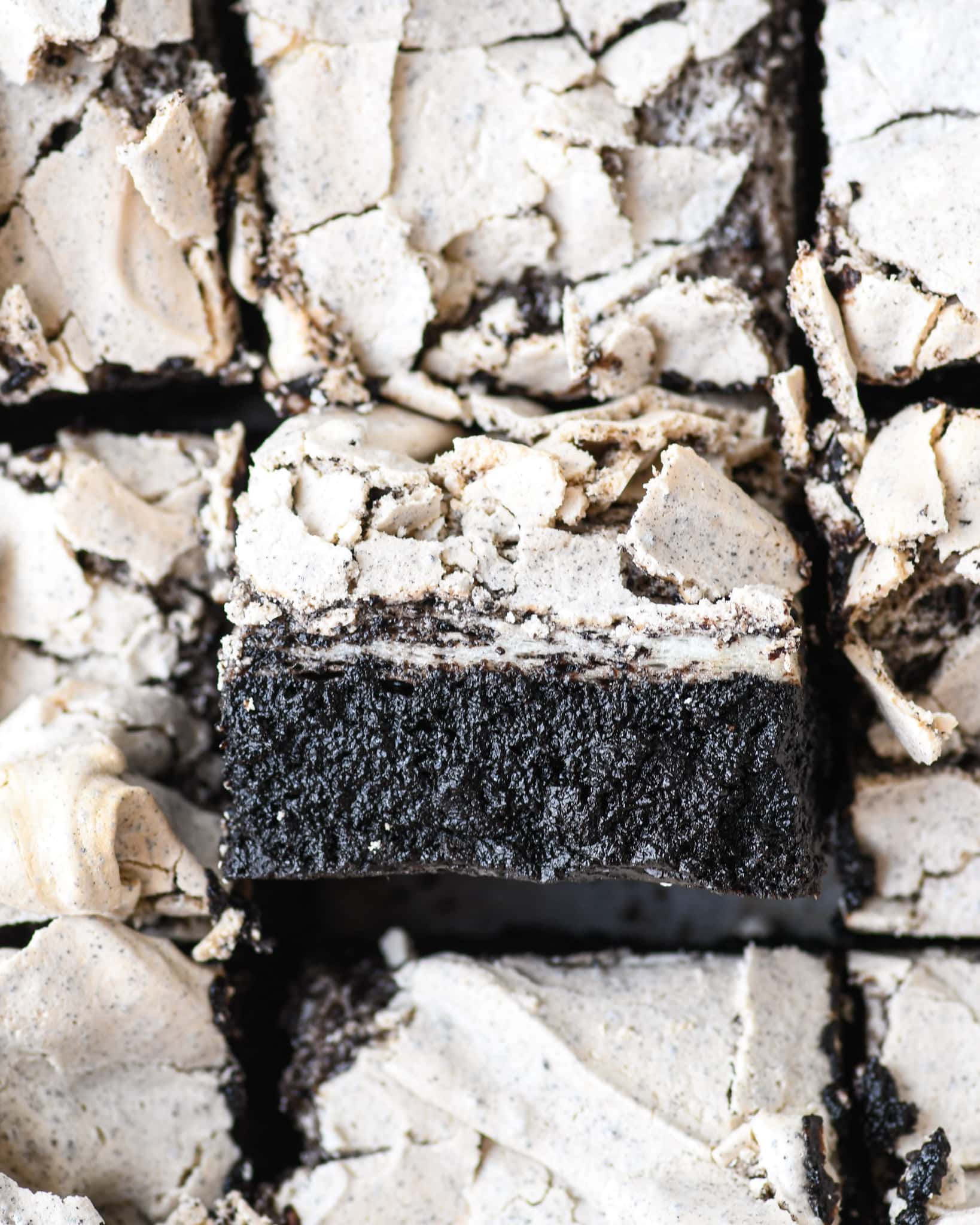 I think of these as the brownie ode to oreos. This takes all the goodness from our favorite chocolate sandwich cookie (the darkest chocolate, the sweet cream filling) and puts it into a fancy dessert with a chewy/crispy/fudgy, complex texture.

During the summer I had some ground oreos leftover from another baking project and threw them into a meringue mix for something that would be like an oreo mcflurry (see below). They baked up nicely and were SO GOOD I wanted to make them the start of a dish (or two!) and while brainstorming what to do, I thought I could make another twice baked meringue concoction.

Putting meringue on brownies is fairly common, but usually the meringue is not baked on top (it might be torched a bit, so that the resulting dish is kind of s’mores-like). And those dishes are more like brownies with a fancy buttercream on top where as this is a layered, fully baked brownie bar. 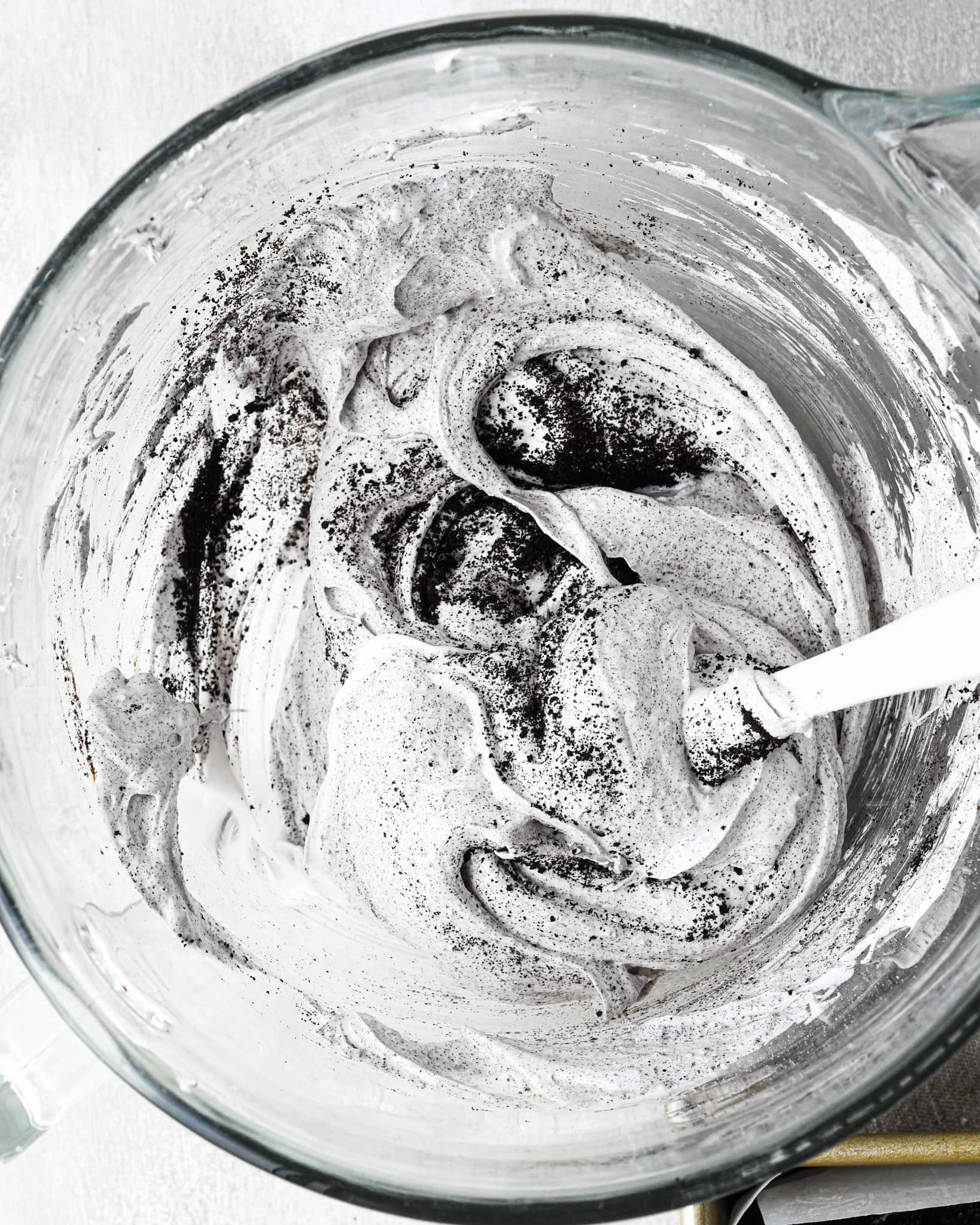 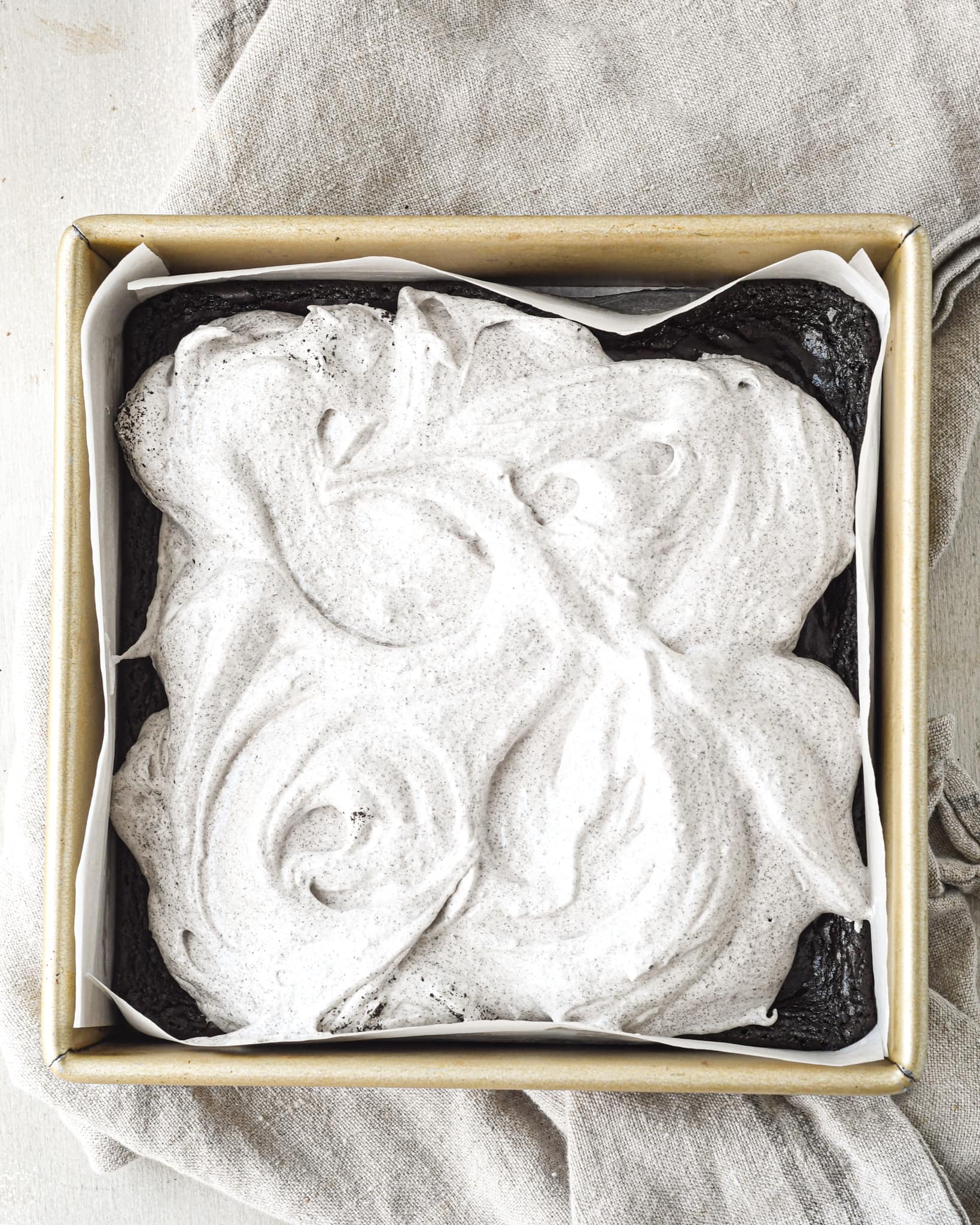 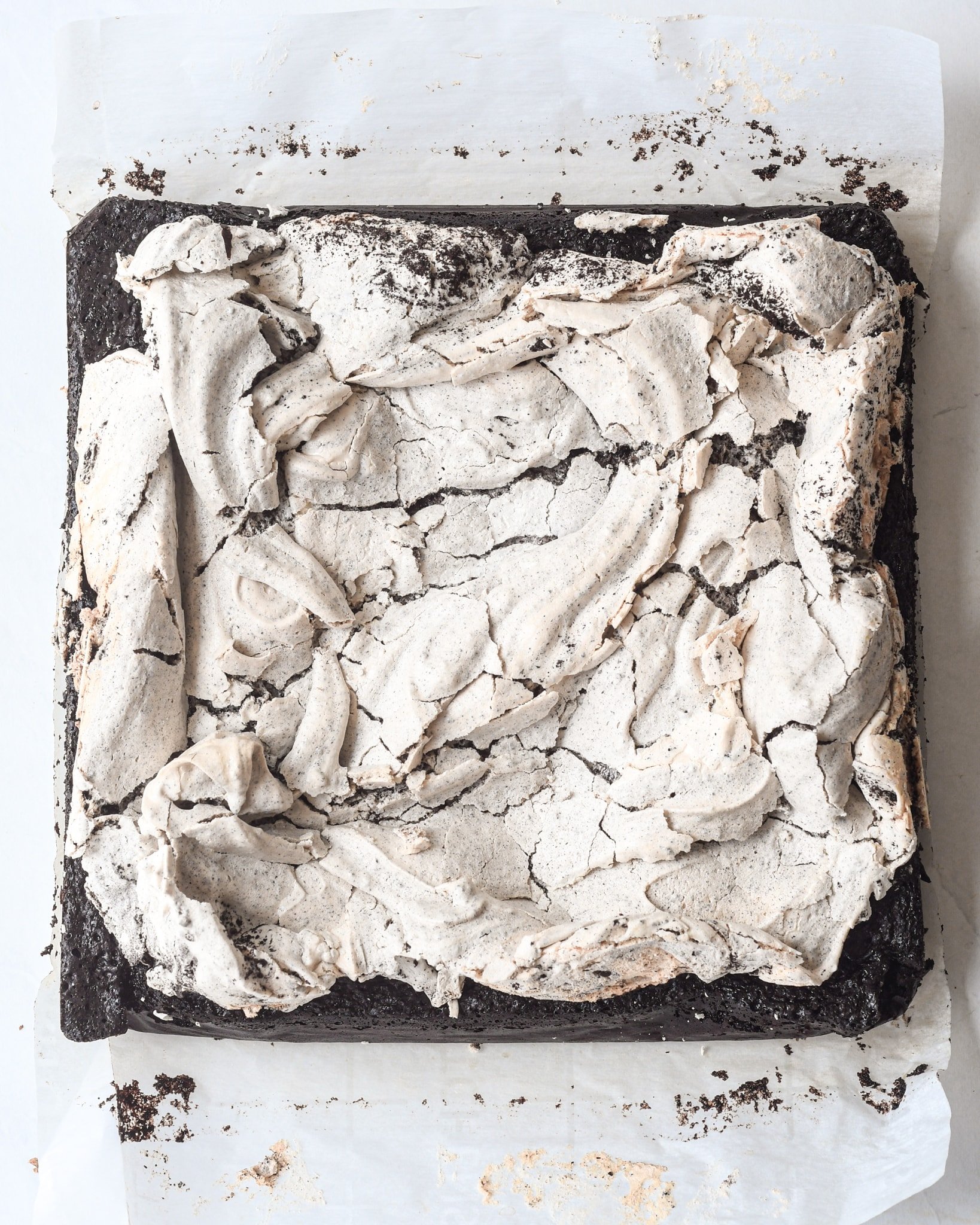 If you’ve been around buttermilk, you may recognize the brownie recipe and likely, you won’t be surprised at the use of black cocoa either.  The choice to use some black in here was twofold: black is what is used to make the cookie part of an oreo (where it gets its deep, almost smoky taste) and because it is devoid of the usual chocolatey sweetness, it would contrast nicely with the sweet vanilla meringue on top. I only swap in 1/4 cup of the cocoa for black but you could do more (1/2 cup or even for the full 3/4 – but beware, they will be very strong tasting if you do so). Generally I like some black cocoa but not too much because I still want some of that chocolatey taste to come in via natural or dutch cocoa.

What else can I make with black cocoa?

Should you have extra black cocoa, I have some suggestions for what you can use it for: chocolate mascarpone buttercream, chocolate sugar cookies and darkest chocolate ice cream.

This flourless chocolate meringue cake is beloved on the site, much to my amazement! When I first published that recipe I was skeptical it would resonate as much as it did; partially because it’s such an un-traditional dish, but also because there was a lot of room for baker’s error in the bake time and thus getting the texture right. Like that cake, to make this first you bake the bottom layer (the brownie in this case) and once it’s partially done you add the meringue on top and return it to the oven. When it comes out of, you want the brownies to be cooked but not overdone, and the top of the meringue crispy and a bit marshmallowy in the center.

I made this two ways: with the top layer as a dried out meringue (in the photo below) and then with it more pavlova style where the outside was crispy but the inside was soft. If you look closely at the top photo of this page you can see the two layers of meringue and the brownie layer, nice and fudgy. 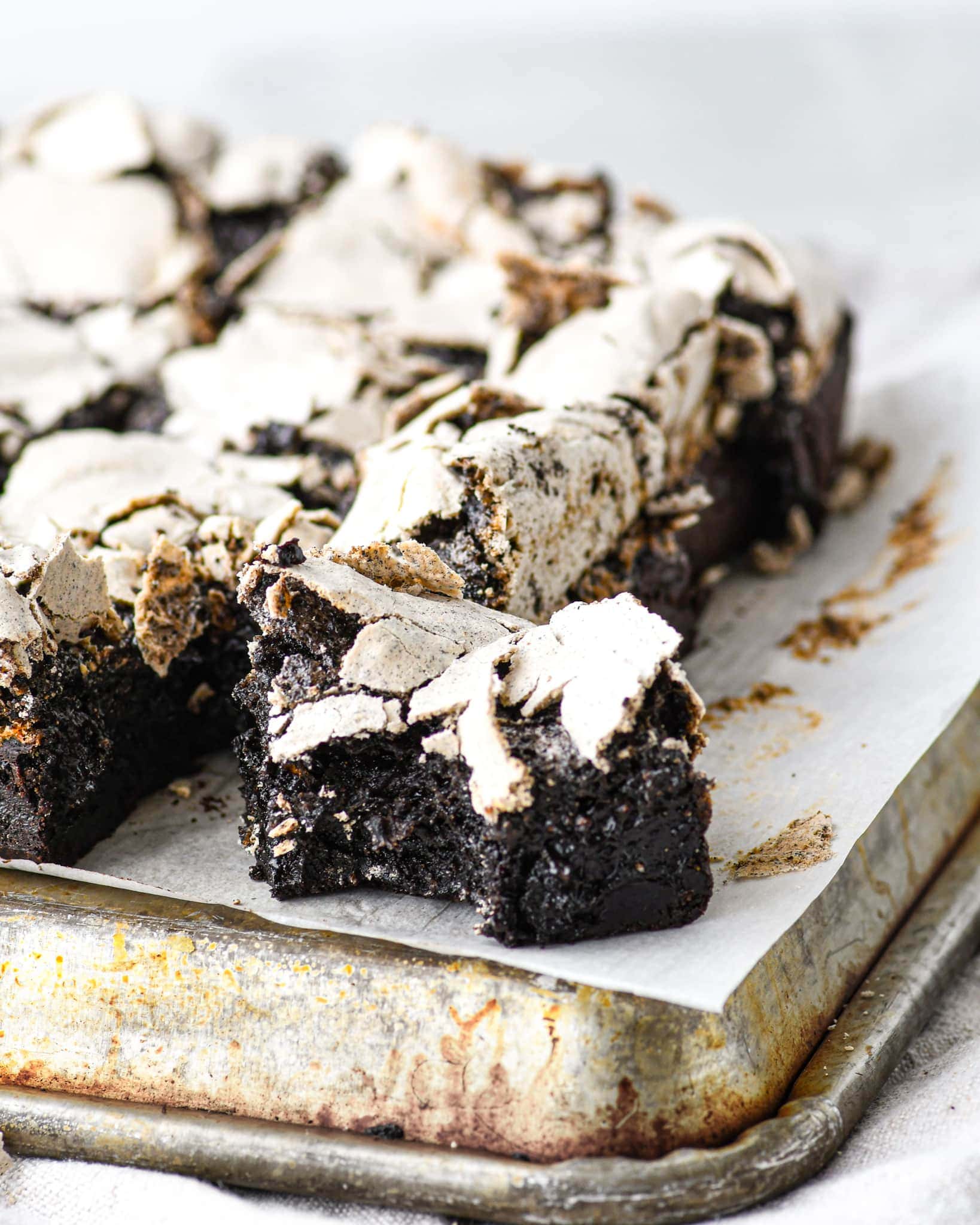 How to make fudgy brownies

Fudgy brownies depend on a few factors: ingredient ratios; method of incorporation, and baking time. A brownie recipe with a lot of flour is going to be cakey; which is why mine has very little. A good brownie recipe is a combination of eggs, sugar, butter and of course, chocolate. Some recipes use cocoa and some melted chocolate; melted chocolate is welcome imo but only in addition to the cocoa because it comes with added sugars and fats and lacks the intensity of the chocolate flavor that cocoa brings. A good fudgy brownie does not have leavening in it; you don’t need baking soda or powder. To get an even denser brownie you can add chopped chocolate to the base, like I do in these shiny top brownies.

As for methodology, stirring the flour in at the end, just barely, ensures that your batter doesn’t toughen. I make my sugar/butter mix over a bain marie to melt them together but not directly over heat less I risk burning it. Finally, baking on a slightly lower temperature for longer also helps get that perfectly chewy, fudgy center. 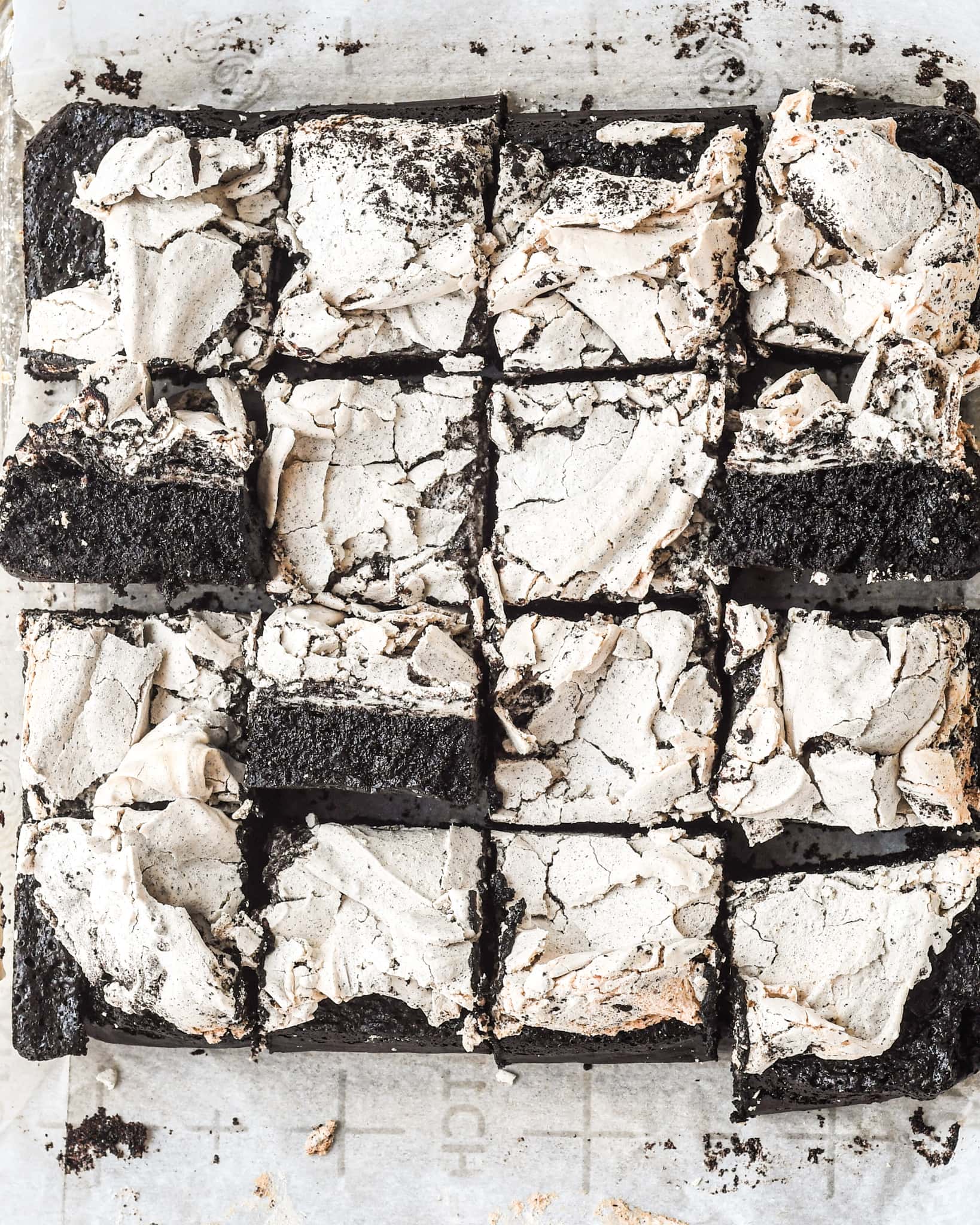 How to make Meringue Brownies

Essentially making a meringue is about whipping sugar and egg whites together until the sugar granules have dissolved and the mix has reached stiff peaks (ie. holds its shape).

There are two ways to do this: the French method which is to add dry sugar slowly as the egg whites whip, and the Swiss method which is to whisk the meringue over a bain marie until the sugar dissolves. Chef Yotam Ottolenghi has this sort of in between method where he warms the sugar for 7-8 minutes and then adds it, to ensure the sugar blends nicely into the whites. I definitely prefer the Swiss or Ottolenghi method as I find heating the sugar is a more reliable way to ensure the granules have melted before the meringue goes into the oven.

I give two options for how to make and cook the top layer: one that yields a dry meringue texture and one that gives you a softer more chewy, marshmallow like center.

Black Cocoa: KAF is a great source. They also make a double dutch cocoa which ultimately, is exactly what we need here. Alternatively, you can use a good quality dutch cocoa and you will have aces brownie.

Granulated Sugar: I’ve been asked why I don’t use brown sugar in my brownies because it apparently makes them moister. I don’t see this in mine, and because mine are so heavy on the cocoa, the ‘caramel/butterscotch’ notes from the brown sugar would be lost anyway.

AP flour: I think you could use an alternative flour like rye in these or oat flour but I’d shy away from buckwheat or whole wheat as those change the texture more dramatically.

Butter: Unsalted so you can control the salt level but if you only have salted just add less salt.

Eggs: large, no substitutions. Don’t try this with flax egg or aquafaba!

Eggs: this you can sub with aquafaba but only if you are short on eggs, because you do need eggs in the brownies so this dish can’t be egg free.

Granulated Sugar: no subs! Brown is likely interfere with the crispiness of the meringue.

Vinegar & Cornstarch: These are used as stabilizers and to make a marshmallowy center (rather than a fully dried out meringue).

Ground oreos: You’ll need to remove the cream in the middle, we don’t want to add anything that can compromise the structure of the meringue so something with heavy fat is to be avoided. The cookie crumbles are like nuts and become part of the meringue without interfering. 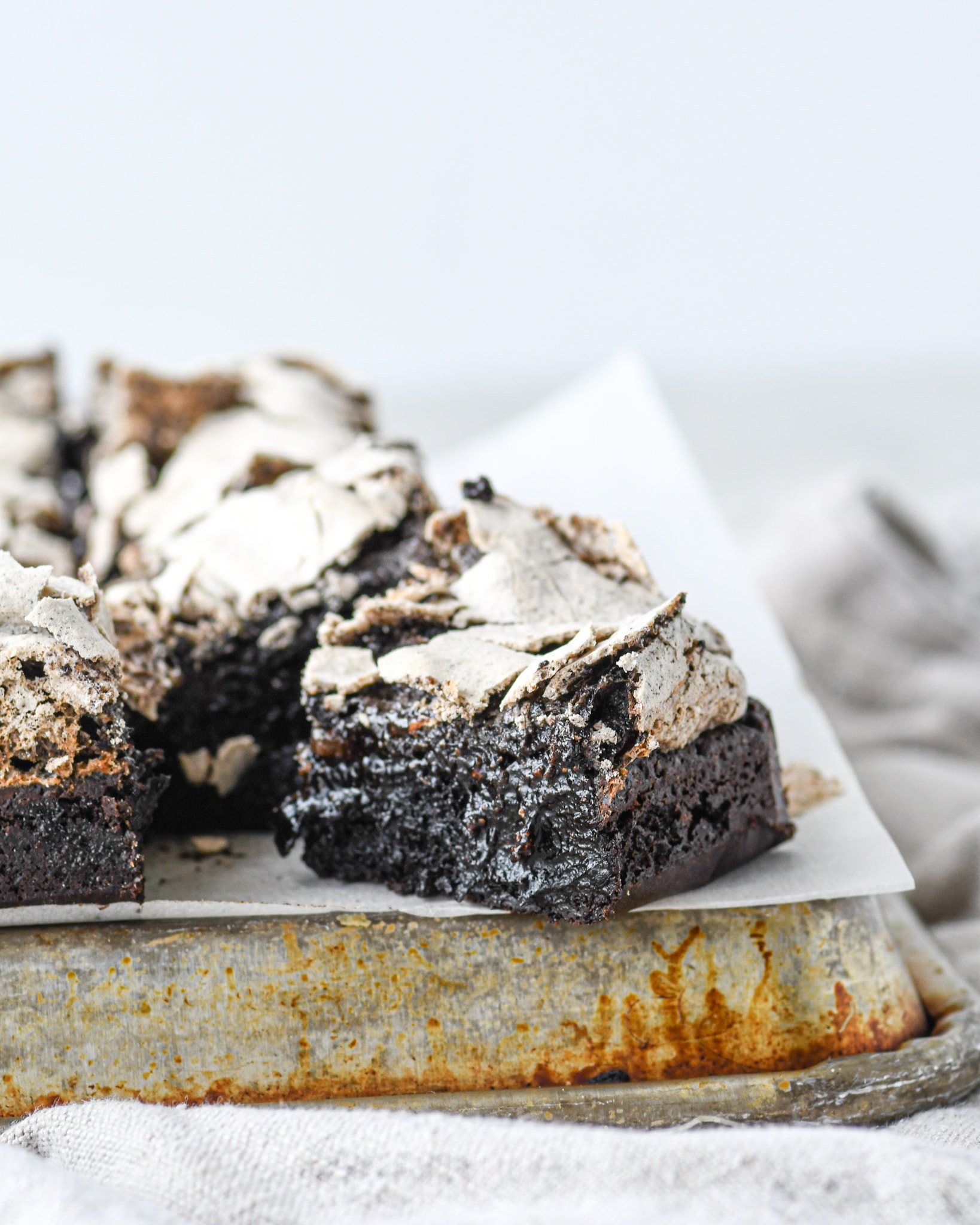 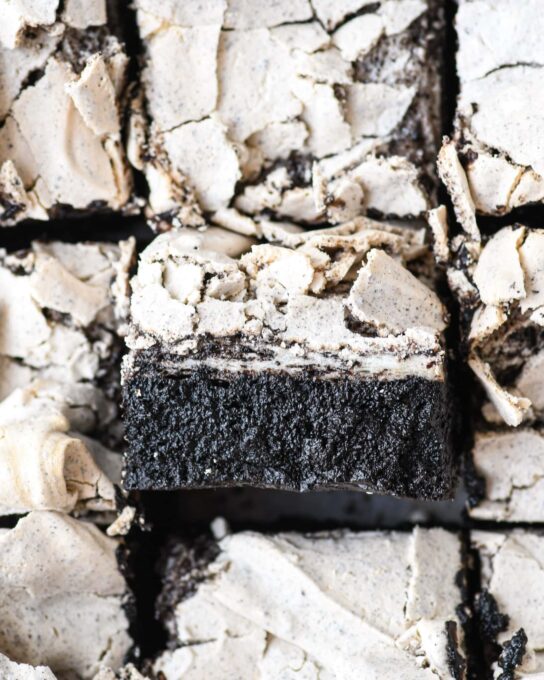 Avoid a glass or ceramic pan for this recipe. Use metal, it conducts heat faster and more evenly. 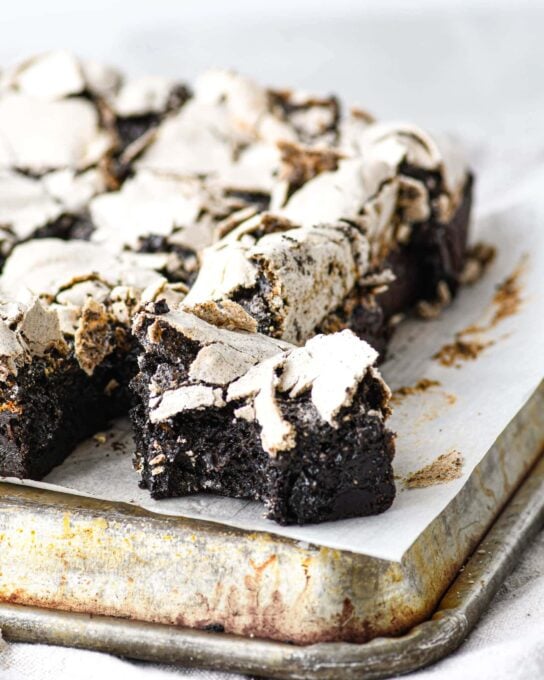