Red velvet never tasted so good. These are less about the red, more about the chocolate, less about the artificial stuff and more about real dark dutch cocoa and freshly scraped vanilla beans. This cake has the most wonderful texture: super super soft!

Red velvet never tasted so good. These are less about the red, more about the chocolate, less about the artificial stuff and more about real dark dutch cocoa and freshly scraped vanilla beans. This cake has the most wonderful texture: super super soft! 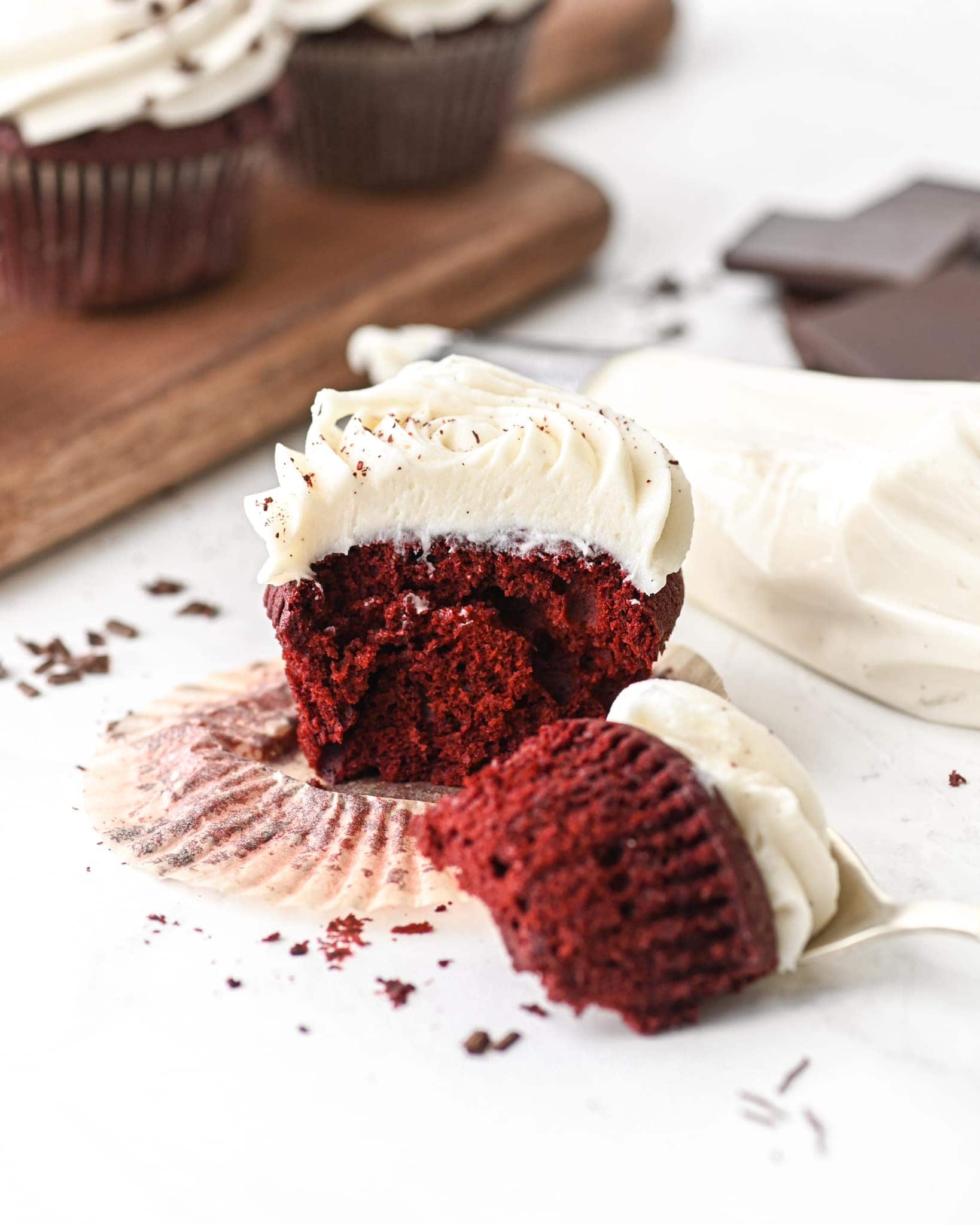 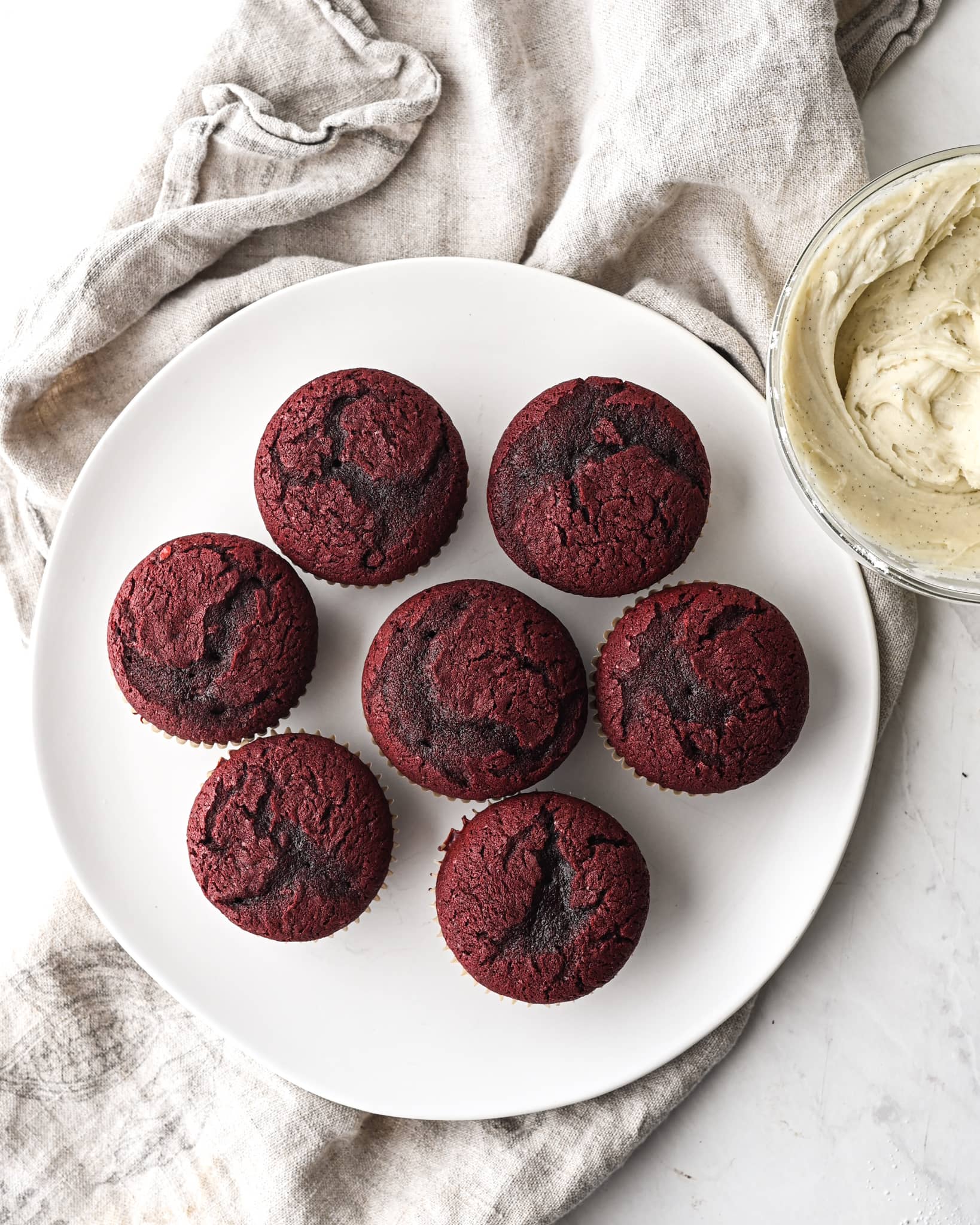 Of all the people in the world to post a recipe for red velvet cupcakes, it should not be me. I have this mildly annoying response to those who say ‘red velvet’ is their favorite cake flavor: “But that’s NOT a flavor! What you really are saying is that you like a subtle, at best, chocolate cake with cream cheese icing. If they take the ‘red’ out you’d be eating a poor excuse for a chocolate cake….” Blah blah. Most people tune me out :p

So how is it I’m here today trying to make a case to you to make these red velvet cupcakes? 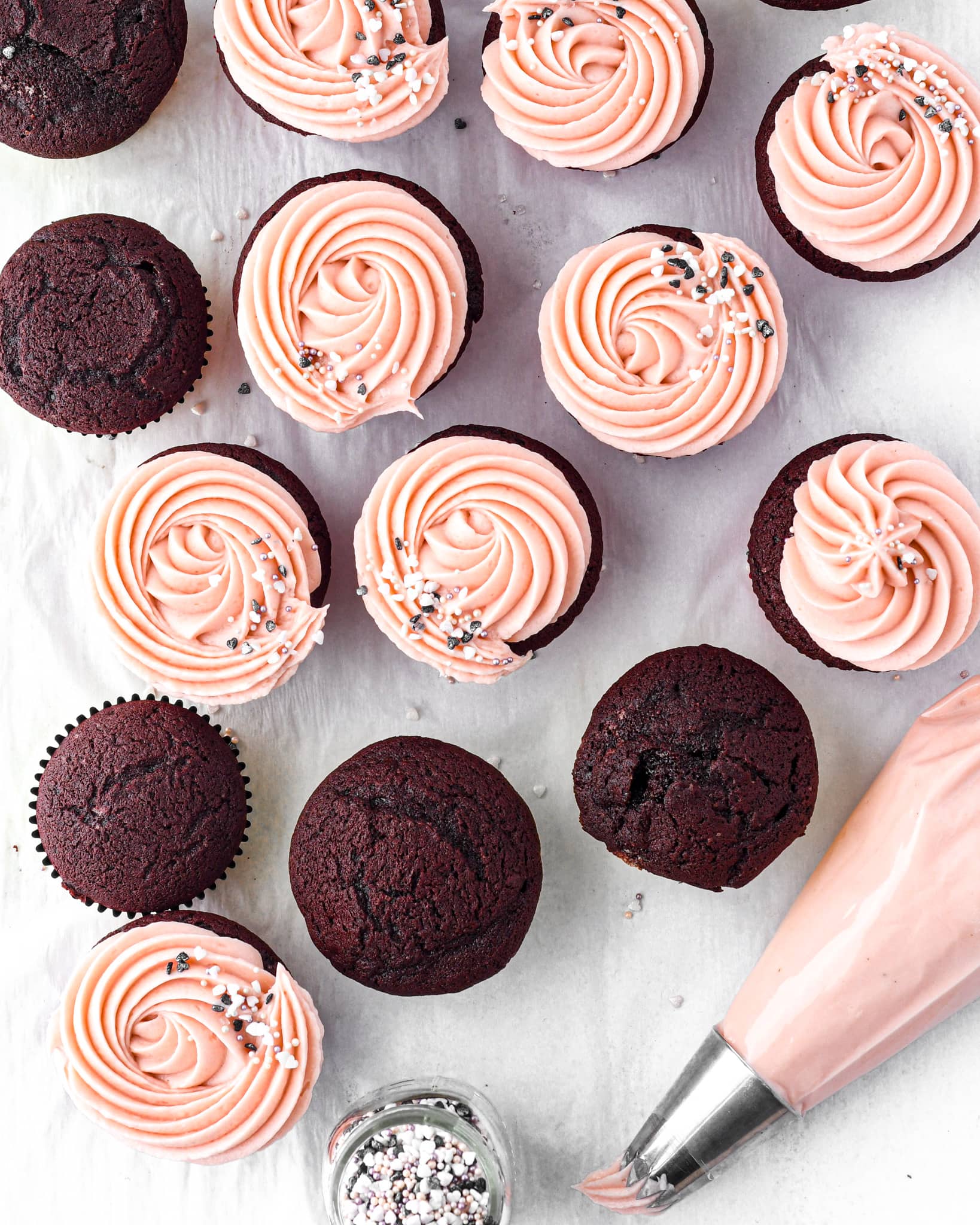 Okay here’s the thing. For most of the year, I pretend to hate red velvet and then every February, I make cupcakes for my annual galentine’s brunch. I know my girls are going to want cake, especially cake that they can take home after I’ve stuffed them with waffles and scones and other goodies, and well, I gotta be on theme.

I developed this recipe based on a cake from one of my mother’s old 90s magazines which she had gotten a hold of  a grocery store; I don’t have the original so I wrote up what I could remember from it and worked from there. For a Galentine’s party, I made this recipe and was very excited to finally have something that took on the costume of ‘red velvet’ but was really a freaking good chocolate cupcake.

(Galentine’s 2020 now stands out to me now very fondly, it was the last time we were able to have a meaningful gathering with our friends at home before covid hit! The photos with the pink tinted buttercream are from last year.) 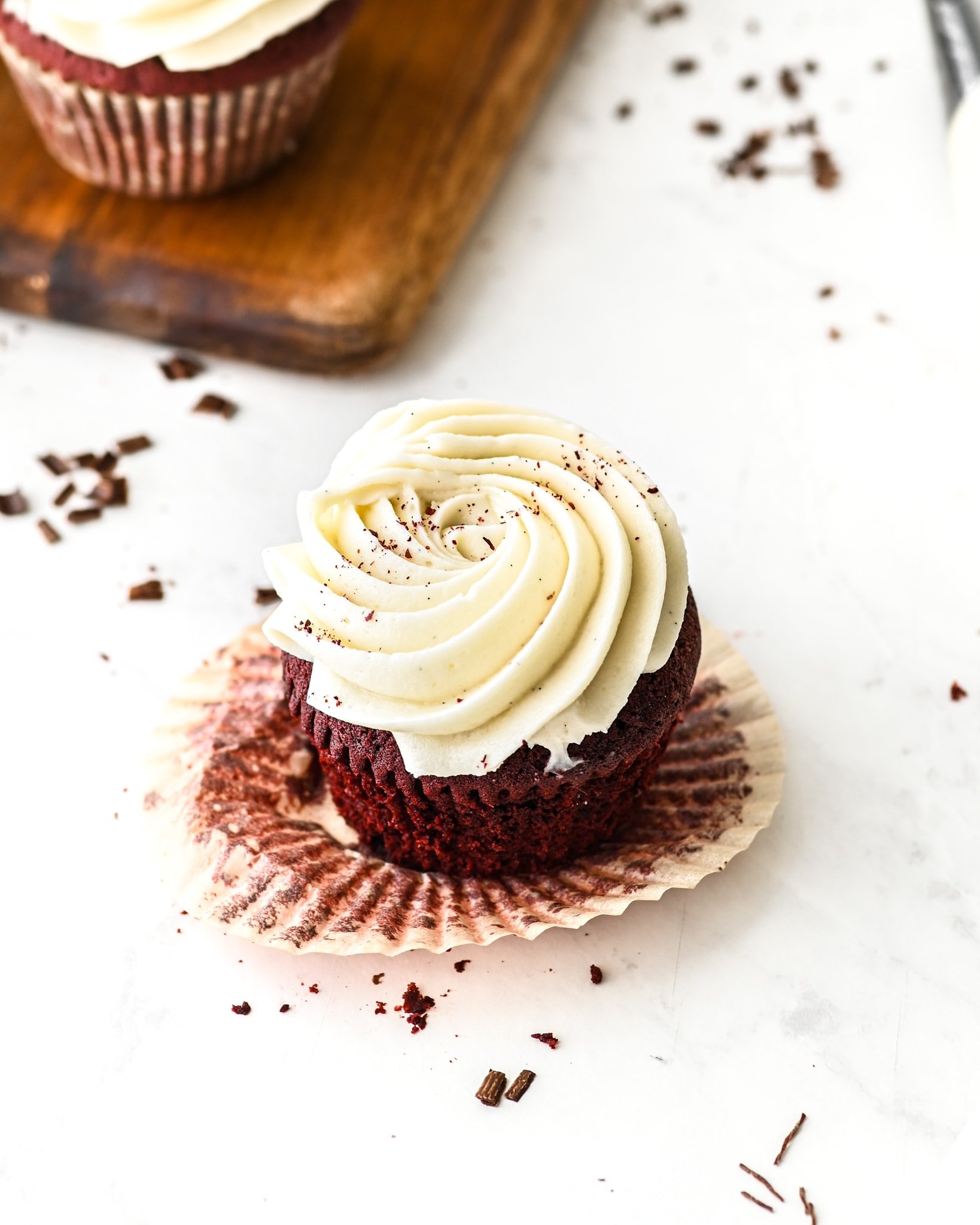 Tell us about this small batch red velvet cupcake recipe

In the spirit of lockdown/covid/small gatherings and infrequent trips to the store, I’m presenting this recipe to you halved of what I normally bake it. It’ll give you eight perrfect cupcakes.

And well, if these aren’t the best red velvet cupcakes ever, IDK what is. Two things I want you to know about the recipe:

This is a one bowl recipe! It is a pretty straightforward process: beat the butter, sugar, vanilla and salt together until it is light and fluffy. Since this is a small batch recipe you’ll likely use a hand-held mixer and if you are impatient like me, you’ll want to stop beating before you should. Push through the urge and keep beating, you want it really airy; beat at least 5-7 minutes.

You’ll add the egg and beat for at least a minute or two, until it’s emulsified. Next you’ll add the dry ingredients and while they are mixing in, you’ll slowly pour in the buttermilk.

Over my years making cakes I have learned to read a batter. Often the way a batter looks tells you a lot about how it will bake. In this case, the batter will be thick but airy, and look very smooth and this is what makes the tender texture.

I have a whole post on buttercream which I recommend reading, but I’ll sum up the main points here: 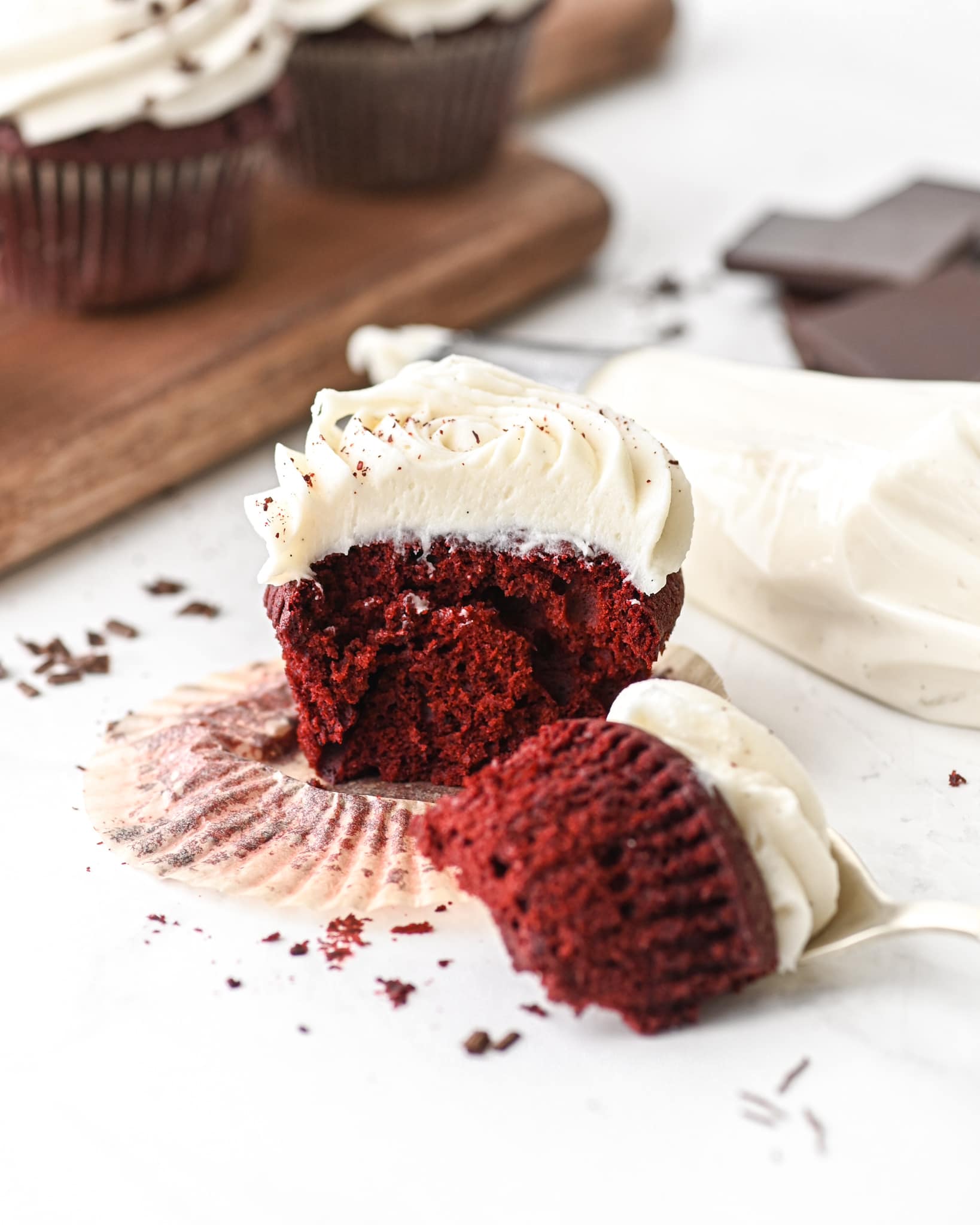 First I’ll tell you what cannot be substituted: eggs and butter. If you’d like an eggless or dairy free recipe, best to look elsewhere. I’ll also veto the use of a different cocoa and any reduction in sugar which will compromise the structure and texture of the cake.

As for the rest:

Cake Flour: You could use all purpose flour here instead of cake but cake flour gives us that lovely tender texture. You can make your own by removing 1 tablespoon of flour (after you measure) and adding 1 tablespoon of cornstarch.

Buttermilk: Some will tell you that you can substitute buttermilk with a milk & lemon mixture or milk and vinegar. I don’t love this substitution because while it can mimic the acidity of buttermilk, you lose out on the creaminess that buttermilk brings to a baked good. In a pinch you can do it though. Alternatively, kefir is really the best substitute for buttermilk.

Sour cream: I mentioned that I like to use something acidic in my buttercream to counter the sweetness. Sour cream works great here because it’s thick (and cream cheese makes the buttercream overly soft) so a good sub might be yogurt or labne. And in smaller amounts you could use buttermilk, kefir or even vinegar. Or you know, just milk!

Vanilla bean: You can swap this with 1 teaspoon pure vanilla extract. Taste the buttercream to see if you’d like to add more.

Cream cheese: The most popular way to make red velvet is with a cream cheese buttercream. Alternatively, you could make it with a basic vanilla buttercream and simply leave out the cream cheese. Essentially you’ll have a chocolate cupcake with vanilla. 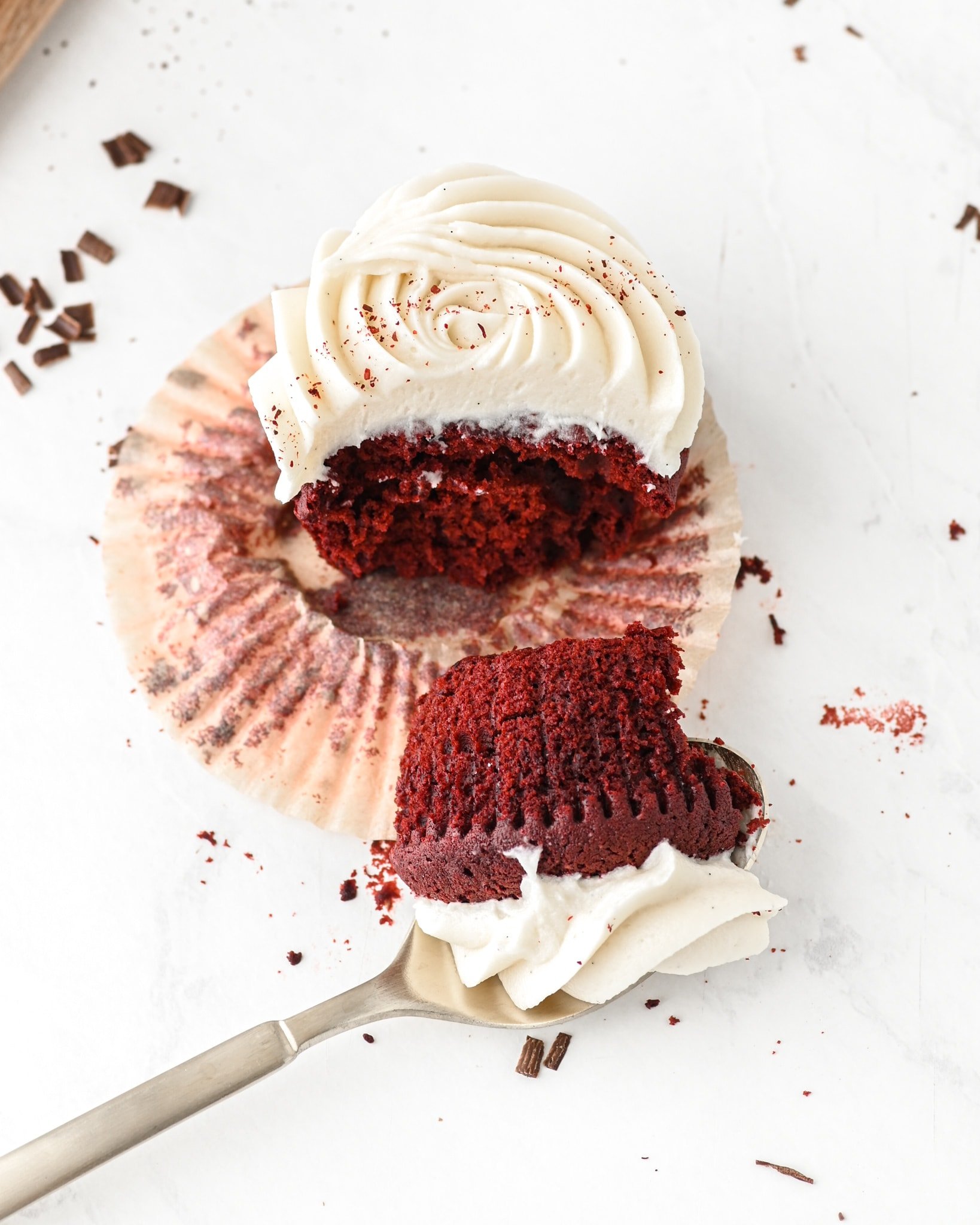 Can I double the recipe? How do I store the cupcakes? Can I make them ahead of time?

Yes! I mentioned above I normally make this doubled (so ½ cup butter, 1 cup sugar, etc.). When I double it I get 16-18 cupcakes, depending on how high I fill the muffin liners. In the photos I filled them quite high and divided the batter between eight liners.

If you are making the cupcakes ahead of time store them in an airtight container in the freezer (they’ll last weeks). The buttercream can be made ahead of time and stored in the fridge for a week (let it come up to room temperature before piping). 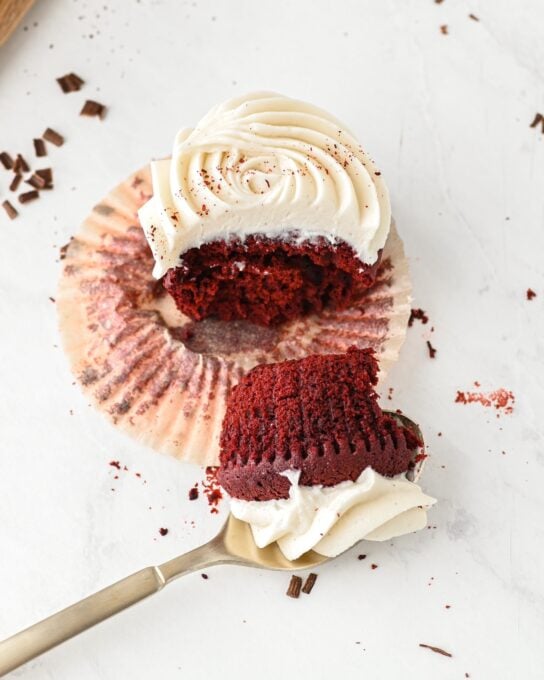 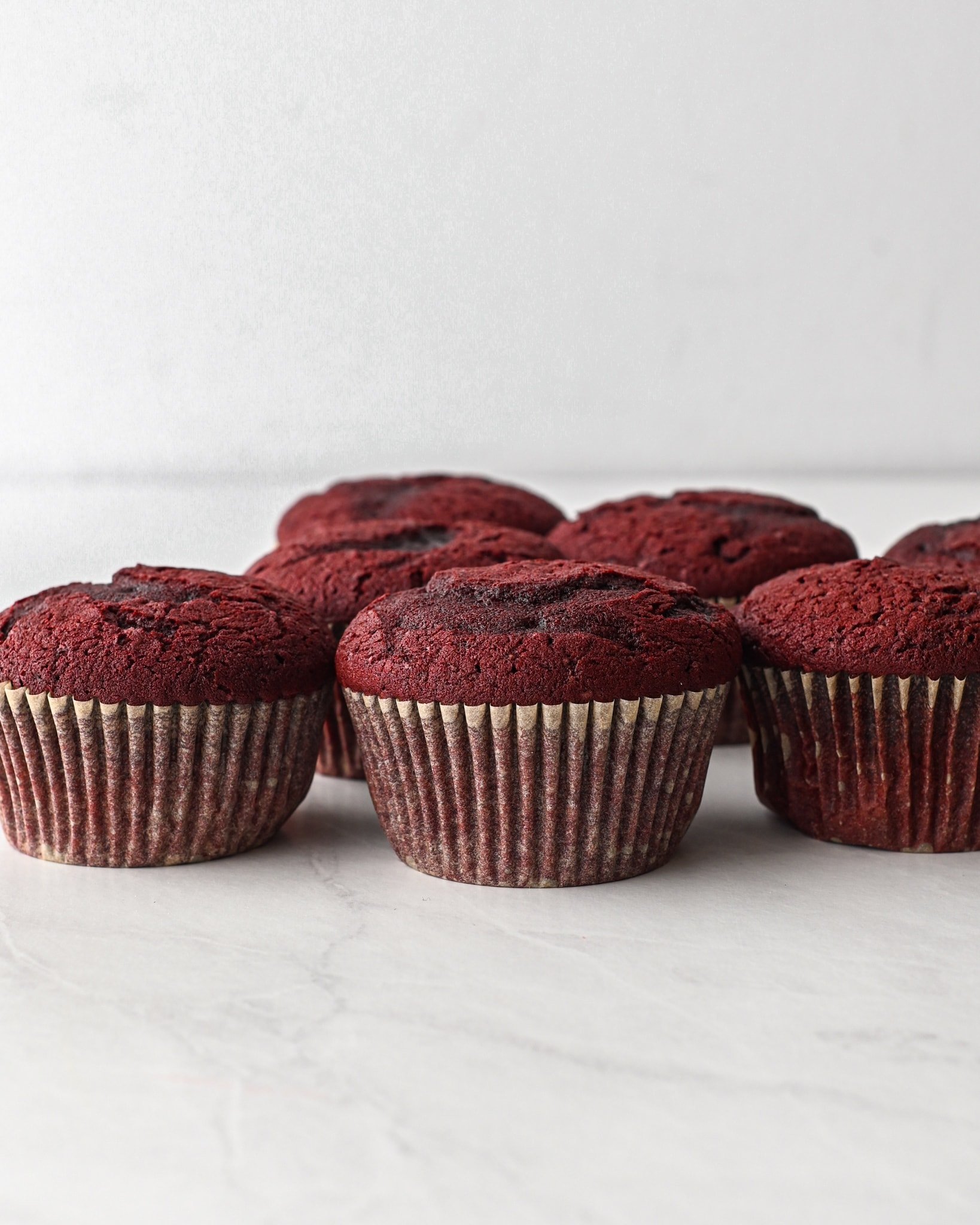 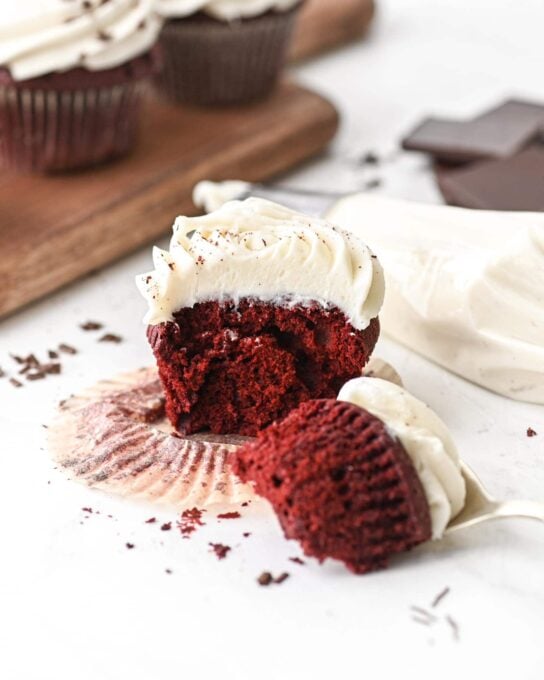