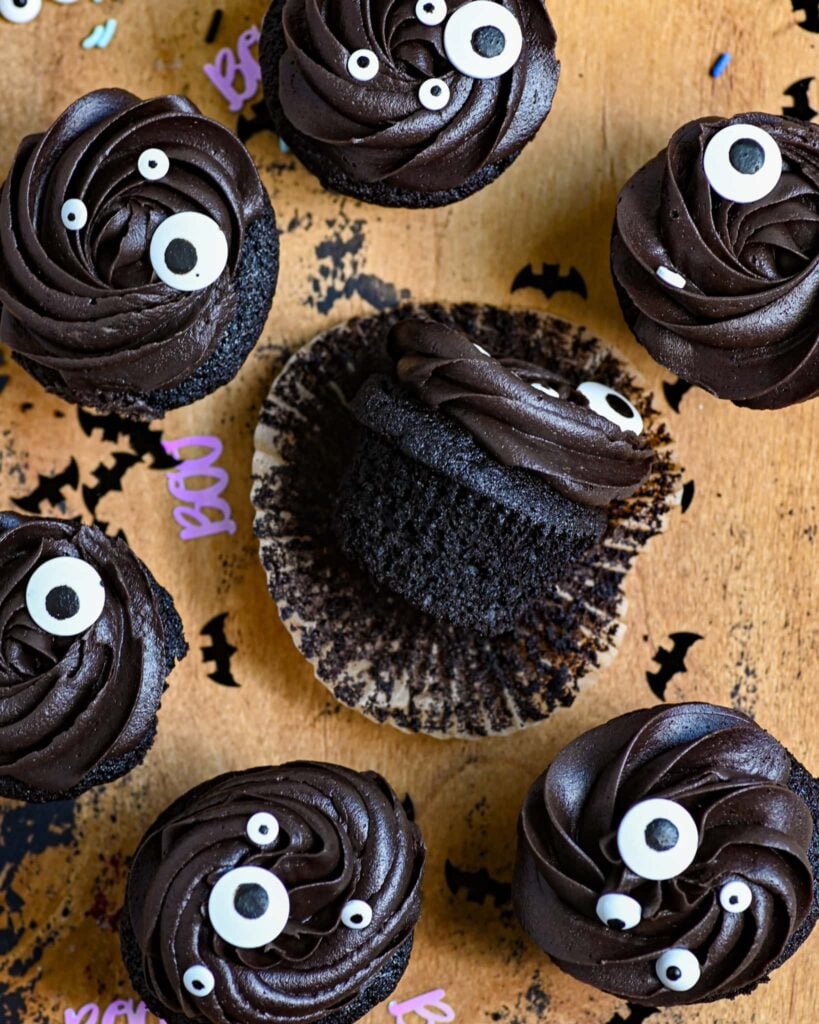 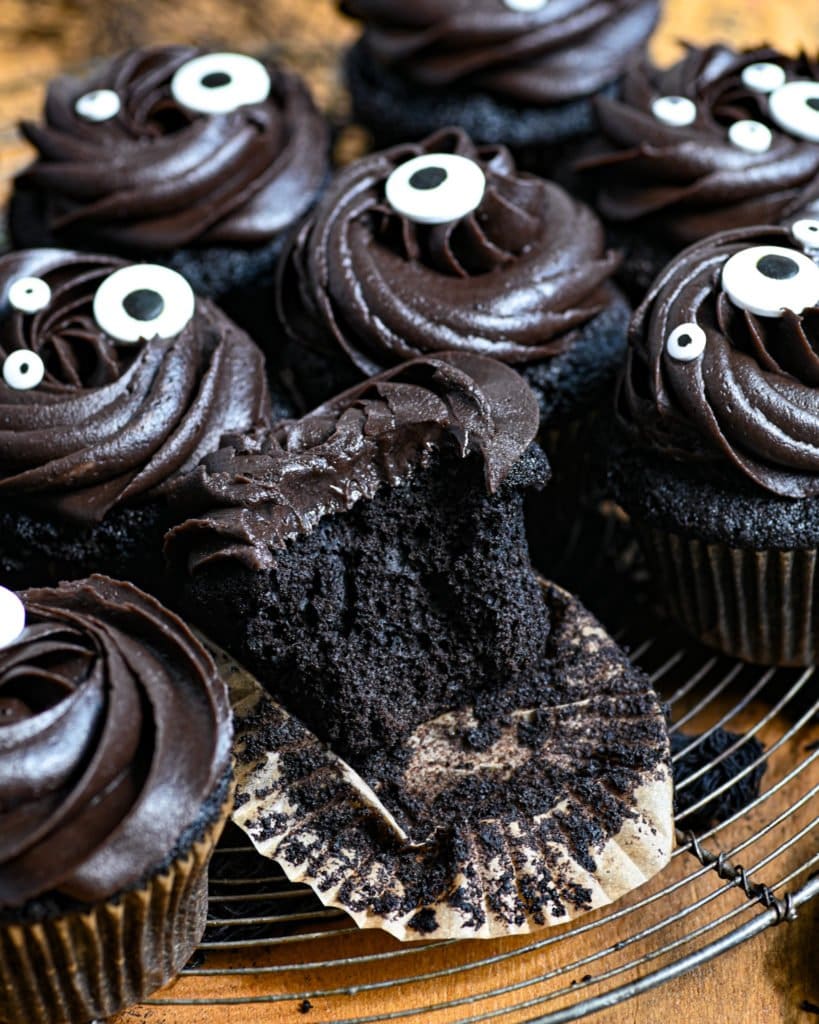 From what I can tell, a lot of bakers use black cocoa as a coloring agent and in small amounts. It’s a strong flavor, true, but it’s actually pretty delicious – if you get the right brand and have the right recipe. These black cocoa cupcakes, based on the black cocoa cake, are designed to be a really, really fantastic dark chocolate cake.

I’ve paired these with a cream cheese buttercream this time which lightens up the taste a bit and gives the buttercream a much softer consistency. While I used plain kefir in the original, I reached for vanilla here – that soft vanilla comes through wonderfully against the dark cocoa notes.

Since cupcakes bake pretty quick, there’s a lot less concern with these drying out. These are going to be winners! 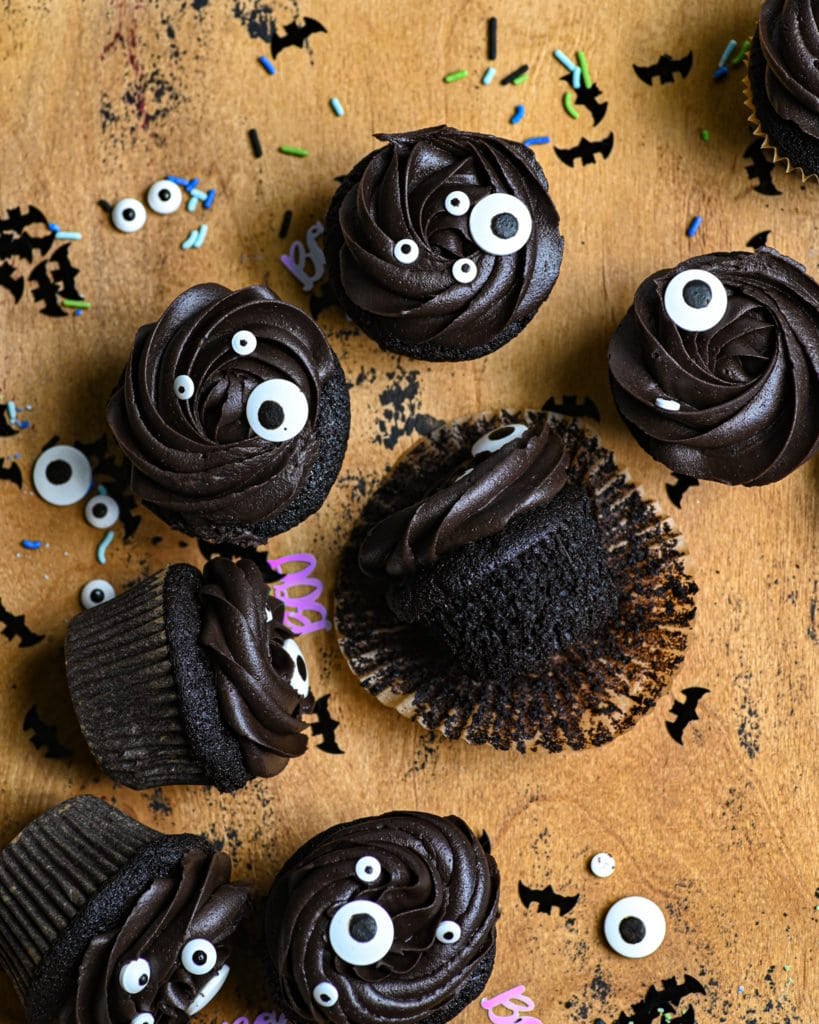 Black cocoa: Black cocoa is the darkest cocoa powder, ultra-dutched and it’s the most alkalized of all cocoas. It doesn’t have much acidity and some of the traditional chocolate flavor isn’t there but it’s a killer ingredient in this recipe.

Kefir: A fermented milk that’s a staple in my kitchen. It’s thick and creamy and especially great in cocoa-based cakes which tend to dry out so well. I

Cake flour: Cake flour, very fine flour that’s been mixed with cornstarch leads to a light & fluffy cake. Because of its special features it’s a lot less likely to overmix and create a tough texture when you’re using it.

Butter: Unsalted (we’ll add the salt ourselves) and softened. A few people have used some oil in replace of butter in this recipe with successful results but I haven’t tried it myself. To

Sugar: granulated white sugar. Don’t substitute with brown as that can throw off the acidity. Don’t reduce the amount of sugar either as it will dry out the cupcakes.

Eggs: Large, if yours aren’t at room temperature when you are about to begin set them in a bowl of warm water.

Baking soda: Our leavener. I use soda instead of baking powder sot hat it neutralizes the buttermilk/kefir in the recipe.

KAF makes a really really good black cocoa. It’s on their site and on amazon.

At the very least I’d use dutch here. And if you can find it, dark cocoa. If you use natural cocoa the cupcakes will be a light brown and will have a different texture.

Dark cocoa powder is a mix of dutch process and black. It’d be great here!

Plain kefir is fine and you can add a bit more vanilla to your recipe to bring out that balance. Alternatively, a full fat buttermilk will do.

This has happened to me too. Chances are the batter wasn’t mixed fully and you had a burst of baking soda in the one that sank. It also could be that the batter was over mixed. 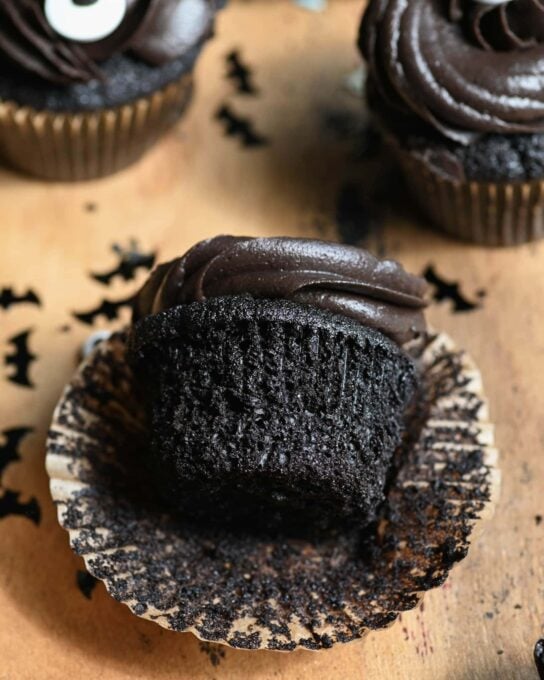 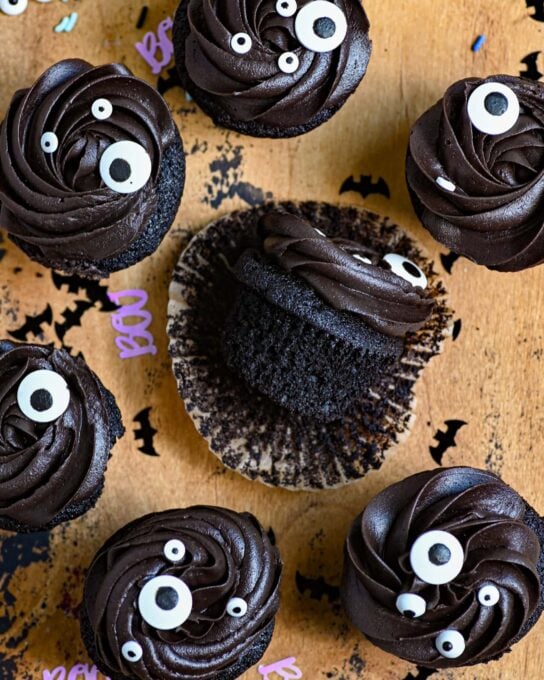