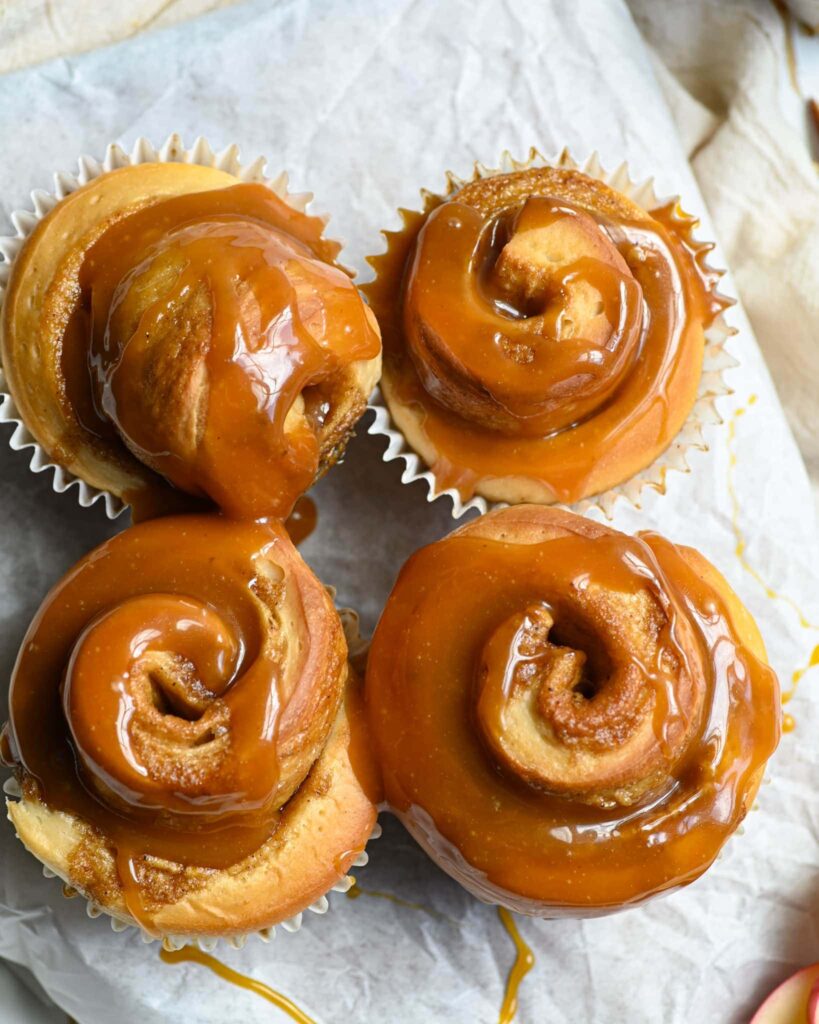 If there is any time of year to make a cinnamon roll even more indulgent, the holiday season is it. This recipe uses my latest dough recipe which uses both sour cream and the tangzhong method for the SOFTEST smooshiest rolls ever, has a brown butter apple cider filling (an ode to these bb cinnamon rolls) and is topped with apple cider caramel. You can make it either as a large cinnamon roll (as big as ya head as this favorite local restaurant calls ‘em, the inspiration behind this giant roll) or muffin shaped. If you use the cast iron you get crunchier edges which is a nice contrast. The muffin shapes are pillowy soft all around. Shape is your choice! 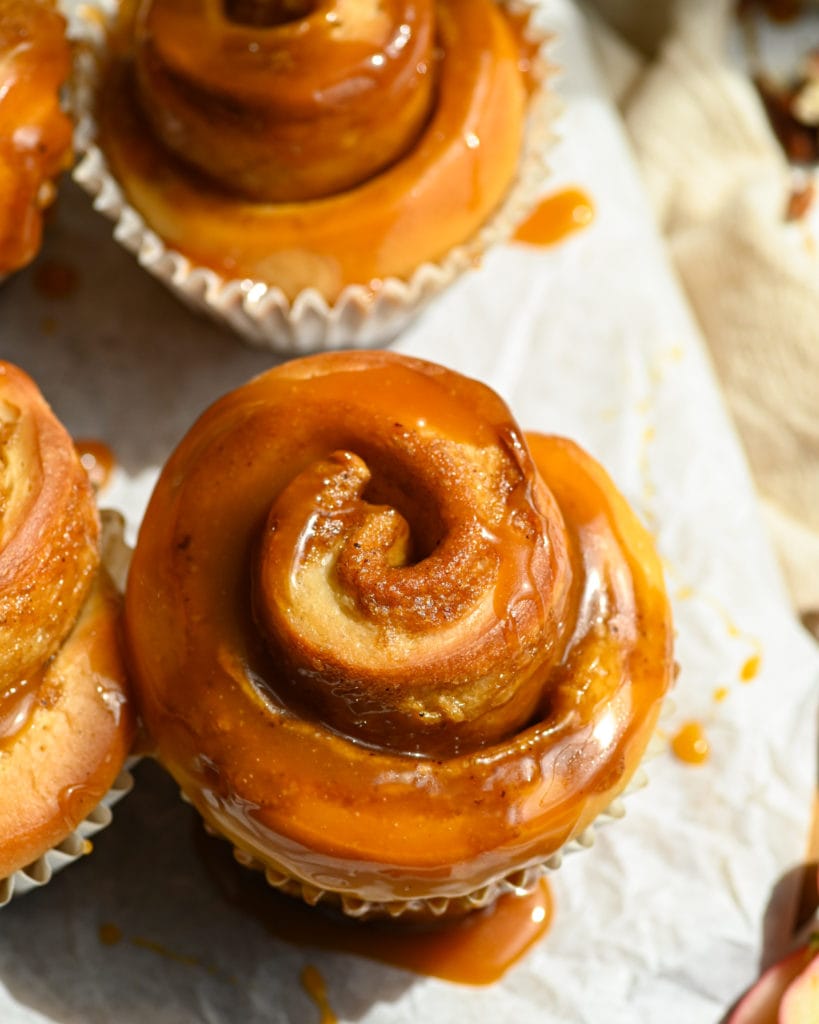 What is an apple cider reduction?

I’ve talked about this a lot here; basically it’s reduced fresh cider. Well what is cider? Fresh cider is unfiltered apple juice, available in the US during the fall. Don’t confuse it with apple cider vinegar or apple juice.

To get a ‘reduction’ or syrup as I like to call it, you simply boil down fresh cider to remove a lot of the water and concentrate the sugar. I started doing this when I couldn’t reliably find ‘boiled cider’. I like to add mulling spices as I boil it down because it flavors it so nicely but it’s up to you.

You can store it in a mason jar in the fridge and it’ll keep for weeks!

A water, milk and flour paste that’s made by cooking the three together until they become a paste. This is a chinese bread making method that has become widely used and is behind the famous Japanese milk bread. Making this roux or paste (or tangzhong) gelatinizes some of the flour starches which leads to a fluffier, softer bread. 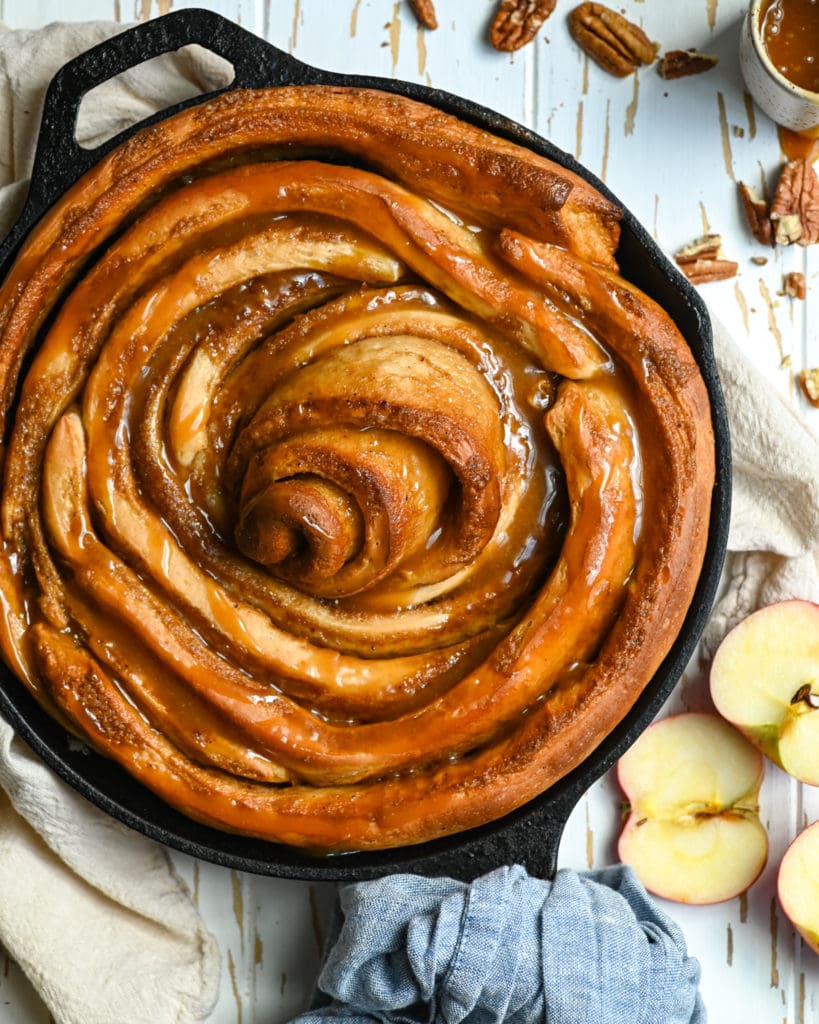 How to make Apple Cider Caramel

There are two different ways to make caramel; dry or wet. Wet is when you cook it with water, it takes a little longer but is a little more foolproof because you have more time to take care of any crystallization that is happening.

I use the dry method to make caramel, so without water which allows me to control the liquid (to have more heavy cream and butter, rather than water for a rich caramel). And I do something a little unorthodox, I add a squeeze of lemon to the sugar. The acid protects it from crystalizing. Once I feel the sugar is covered with the lemon I turn on the heat and let it cook, stirring often to get an even caramelization. Then I’ll add the heavy cream and butter (carefully) and any other additions. Vanilla goes in after the caramel is off the heat. 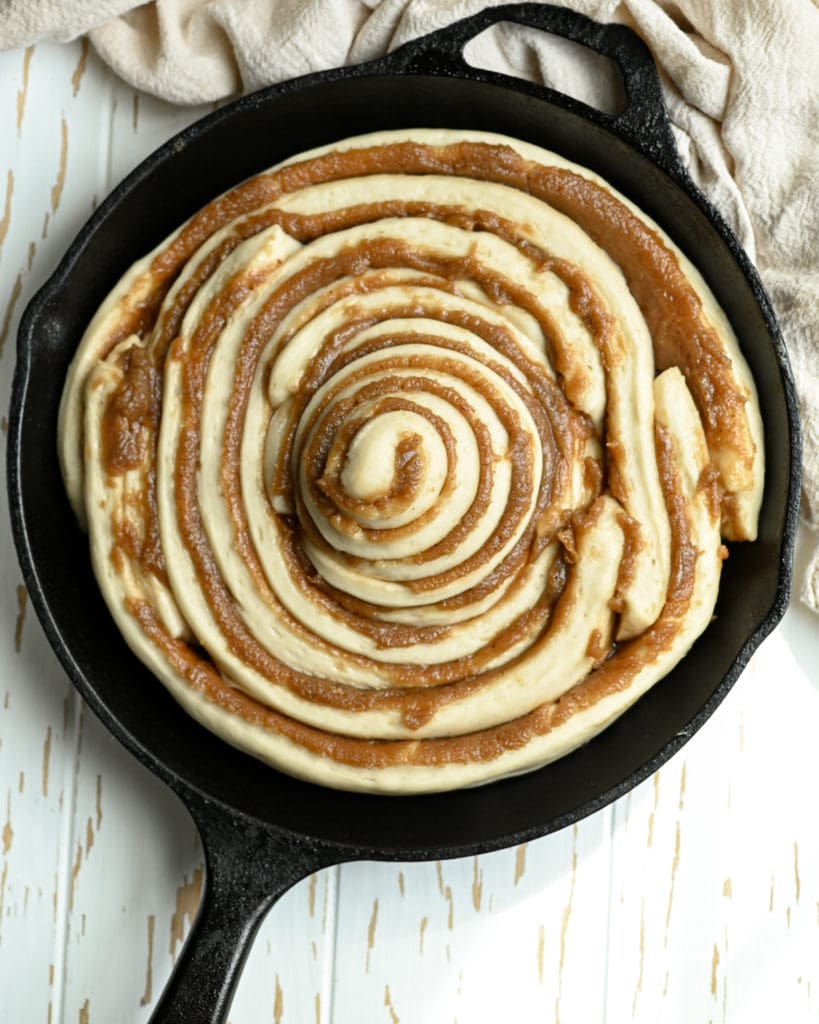 Butter: For the caramel and for the filling. No substitutions recommended.

Heavy cream: For the caramel, no substitutions.

Lemon: You only need a bit and it helps protect the sugar from crystalizing as it’s caramelizing. Can sub with apple cider vinegar (like half a tsp).

Bread flour: You may use a high protein all purpose flour instead if you cannot find bread.

Milk: We only need a bit of this to make the tangzhong.

Sour cream: This makes the dough eggless and absolutely fluffy. I can’t suggest any substitutions for it but if you absolutely cannot find it you may use this dough instead to make these rolls. 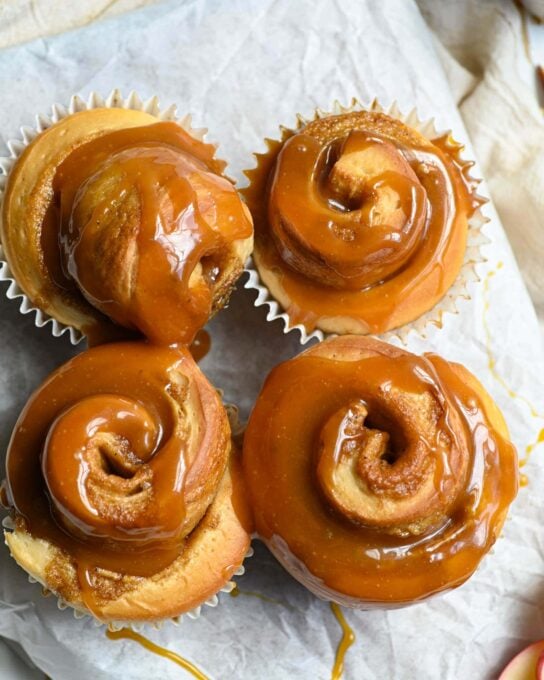 For the apple cider caramel